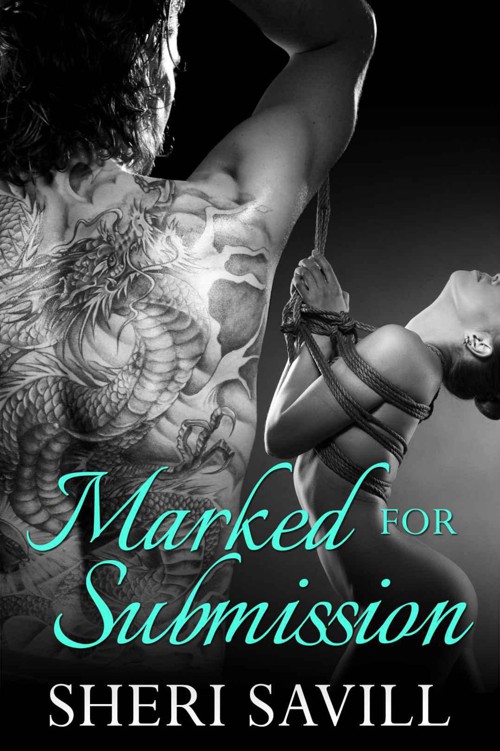 Janna Sommers is a brave woman who knows what she wants: a tattoo – a full sleeve black and grey tattoo, to be specific. It’s an ambitious goal for anyone's first ink, but when she meets handsome and gifted tattoo artist Mark Temple, she finds herself yearning for something more than one of his original designs.

As she willingly places herself in Mark’s
experienced – if sometimes cruel – hands, she finds herself submitting to a strong and uniquely creative dominant, one who arouses intense physical sensations in her – both pleasure and pain.

Bound to his tattoo table, will she also allow herself be used as a living canvas for Mark's ... darker desires? Will she allow herself to be marked,
indelibly and forever, as his?

WARNING
–
Please read carefully before you buy this book:

This book contains content that is not suitable for readers aged 17 and under.

For mature readers only
.

Thank you for downloading this e-book. This e-book is licensed for your personal enjoyment only. It may not be reproduced or used in whole or in part by any means existing without express written permission from the author, Sheri Savill (contact: [email protected] or via the contact form at
Sheri Savill’s website
).
The author can also be contacted at
Romancing the Kink
,
a fine, fun group of erotica writers you should definitely check out!

Warning:
The unauthorized reproduction or distribution of this copyrighted work is illegal. Criminal copyright infringement, including infringement without monetary gain, is investigated by the FBI and is punishable by up to 5 years in federal prison and a fine of up to $250,000. (See
http://www.fbi.gov/about-us/investigate/white_collar/ipr/ipr
for more information about intellectual property rights.)

This book is a work of fiction and any resemblance to persons living or dead, or places, events, or locales, is purely accidental. The characters are reproductions of the author’s imagination and used fictitiously.

To my
wonderful readers, thank you for your support and feedback, and for taking a chance on me.

So a tattoo and piercing shop was pretty much the last place she ever thought she’d be, much less
strapped – strapped! – down to a leather table, half-naked, with a sexy ink-covered man coming at her with … a needle. A sharp, shiny, pain-giving, scary-ass needle. No way. And yet, if the wetness between her legs and the stiffness of her nipples were any indication, apparently she didn’t “hate” needles at all. She fucking LOVED the idea of them. Or, her body sure seemed to, anyway.

But fuck … my labia?
Seriously? What the hell was I thinking, signing on for this? What if he fucks this up? Sexy hunk or not, the guy may be a total nutbag. What if he permanently maims me or something goes wrong? Infection? I liked my pussy. We were friends. Longtime friends. We were close.

“Open for me. Keep open. You wouldn’t want me to fuck this up, Janna.” His voice was low as he leaned in closer to her bared mound. She felt a finger, then another
, enter her pussy and probe the slickness there, withdrawing and plunging in again, as if testing the depths.

“Fuck you’re wet, girl. And I do approve,” he rasped. “Look at this fucking wet pussy. I think someone is a little excited about me piercing her labia. Ten-gauge, I think. Yeah.
Three on each side.” He held up a shiny silver piercing needle, almost daring her to look closer at it.

“Mark, I don’t know about this. I’m not really a piercing
kinda girl. I mean, my ears, yeah, that’s one thing. But this is too much. I can’t–”

“
Shhh!” he hissed softly and swabbed at her labia with a wet towelette. “You don’t even know what you’re capable of doing, do you, Janna? You have no idea … yet.” His eyes shot from her pussy to her face, boring into her with intensity – an artist preparing to create, using living flesh as his canvas. In the throes of creativity, he was sexier than ever, Janna thought, but a little scary, too. Yet she found herself sucked in by his intensity, intoxicated by it, almost as if by osmosis. She enjoyed the feel of his hands firm upon her, holding her the way he needed her to be, a piece of raw material for his art. He tested her flesh – tested strengths, its pliability, its resilience as a canvas. His passion for his work brought out intense feelings of eroticism in her … too long repressed, denied. She felt she could go anywhere with him, under his guidance, and literally, in his hands. The small fearful voice in her would go quiet for a while, but then return – it was part of the struggle in her to accept the darkness in herself, to allow it full expression in the hands of another. Submission.

Jesus, I never should have agreed to this. I’m delirious now. Tattooing my arm from shoulder to wrist is one thing ... but this? This is insane.
Certifiably nuts. OK, I am insane now. It’s official. My tombstone should read, “Here lies Janna Sommers. She went batshit insane one night and let a maniac tattoo -– albeit a gorgeously sexy one with an amazing smile and great eyes and – oh shit Janna –she let him pierce her pussy all over like it was a pincushion because she was pathetically horny and kinky. And you see how she ended up. Let her story be a lesson to all of you, my friends.” Fuck, that’s way too long for a tombstone. I’ll have to edit that down. Delirious … yes, yes I think I am. Quite.

“Deep breath!”
Mark commanded, and before she’d had a chance to comply, a sharp pain again, a pain like no other …
down there
. Again.

How many has it been now?
Five? Five!?

“Oh come on, it’s all over … you did well on that one, Drama Girl. That was the last one, too.
All done now. Six! Fuck your new rings look hot.” Mark looked over the edge of his black-rimmed reading glasses at her with a look of faux consternation mixed with … pride. The artist at work again. She felt a twisting, a sharp tugging, as he placed the final ten-gauge sterling ring in the hole he’d just made in her labia and snapped it closed. She jerked a little, and moaned softly.

“So it’s
done, that’s it. The last ring, right?” she breathed, slumping back onto the leather. She realized, suddenly, how she’d been holding her entire body in a full-on straining statue-stiff position, every muscle taut and flexed to the max, anticipating – and then reacting to – the stabbings from the needle.

Oh God. No. A fucking ice cold cock. ‘Janna
Sommers, you’ve just had your pussy pierced in six places, now it’s time for Cold Cock, the pause that refreshes’.
She made up weird commercials and ad slogans in her head sometimes and usually remembered to keep them to herself so she wouldn’t be committed to a day ward. It was a reaction to … stress, nerves.

Mark teased the tip of the cold hardness at her slick hole, utterly unconcerned that there were six fresh wounds just to the sides.
Her body jerked a little in response to the sudden coldness, the contrast of heat and chill almost too much.

“How’s that feel, little slut?”
he growled, shoving the glass cylinder in deeply, slowly, then gradually pulling it almost all the way back out. “Your pussy just swallowed the whole thing right up. A hungry, desperately hot little pussy, isn’t it? Yes. Needs to be fucked so badly, doesn’t it?”

She moaned and closed her eyes as the sensations played over her in delicious confusion: the heat of the recent trauma to her outer pussy lips, certainly, it was intense, still, but now there was a soothing contrast as the coolness of the clear glass slipped into her velvety
channel and pulsed in and out.

OH
fuuuuuuuck. This is good. Too good. He’s gonna make me come.

“Answer me!” Mark demanded, fucking her with a few slow stro
kes of the hard cold glass.

“Yes … YES ... fuck me, please. Mark, just fuck me!” She felt her face flushing in embarrassment at the desperation in her tone. Her eyes fluttered open to see Mark’s dark eyes staring deeply into hers, watching her response to the dildo fucking. The slick wetness in her pussy made loud slurping noises and embarrassed her even more. That is, she would have been embarrassed had she not been so utterly out of control with lust. She could see he loved watching her wr
ithe, watching her lose control as her own heat collided with the hard cold glass inside her. “It’s so cold … I’m coming … OH FUCK I’m coming …” She shuddered and spasmed, her body vibrating, her breathing ragged. After a few moments she sagged, content and exhausted.

Mark Temple was the sexiest guy Janna
Sommers had seen in a
long
time.

The man was covered in ink – sure, not every woman’s thing, but for Janna, it was right up there with “homo
sapien” in her list of requirements for male … hotness.  She loved tattoos and piercings, especially full tattoo sleeves. Something so dangerous, so bold, about them. She loved them so much she’d decided to finally get a full black and grey sleeve on her own arm. And who better to do the work than a hot young name in the tattoo business who just happened to operate in a shop right there in her city?

Mark was a sought-after tattoo artist with his own shop. He was successful and smart enough to make a good go of a business. Janna had always thought it was odd that some people assumed that having tattoos meant “not that bright.” In her experience, that was
so
untrue. A stereotype, and a fucked up one at that. In fact, by all indications, Mark was something of a marketing genius. He stayed booked up months in advance and was in demand at tattoo conventions. He’d been profiled in dozens of art and tattoo magazines and did endorsements for tattoo aftercare products.