Read Married to the Marquess Online

Married to the Marquess 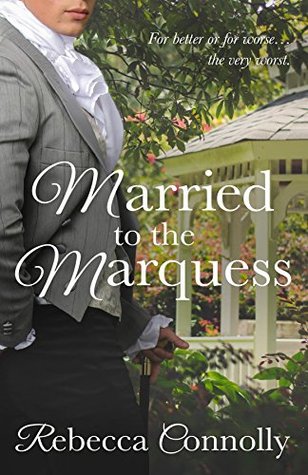 An
A
rrangement of
S
orts

If you purchased this book without a cover, you should be aware that this book is stolen property. It was reported as “unsold and destroyed” to the publisher, and neither the author nor the publisher has received any payment for this “stripped” book.

All rights reserved. Published by Phase Publishing, LLC. No part of this book may be reproduced or transmitted in any form, or by any means, electronic or mechanical, including photocopying or recording or by any information storage and retrieval system, without written permission from the publisher.

To Lori, for being one of my very first fans, for introducing music into my life, for our shared love of all things British and all things hot chocolate, and for your unfailing friendship and guidance all these years. For everything you are and everything you have ever been. Thanks, Mama R!

And to Bewleys, Galaxy, and Cadbury, for being the most incredible hot chocolate on the other side of the sea and changing my life. We’ll always have the memories. And international shipping. Cheers!

Thanks go out to Chris Bailey and the gang at Phase Publishing for making me look better than I am and keeping the dream going. Deborah Bradseth with Tugboat Design for yet another stellar cover that defies my imagination. Whitney Hinckley for your mad editing skills and actually enjoying the stuff I send. Ashley, Hannah, and Jordan for your excitement, keeping me sane, and loving me when I’m not. And for saying it’s okay to have more cheesecake.

Thanks to my family for being with me on this journey and being fans, too. Love you!

And thanks, of course, to my Musketeers. You can bill me for the therapy sessions at any time. I’ll send chocolate.

Derek Chambers, Marquess of Whitlock, had been quite simply minding his own business one fine summer’s day when he was approached by his father and mother, the Duke and Duchess of Ashcombe, and informed that he was to be married in a week to the Honorable Katherine Bishop, daughter of the Viscount Dartwell. It was not such a shocking surprise, as he had known of his impending marriage from childhood when it had been arranged for him.

It was a still rather dreadful prospect, despite his knowledge. His long-standing relationship and interaction with Katherine had done nothing to endear her to him by any stretch of even the most imaginative of imaginations. Poisonous reptiles have that effect on people.

But he knew his duty to his family and their long heritage of well-made matches as far as standing, titles, and fortune went. It was quite simply the way things were done.

So he had married Katherine, and for the last several years; he was never able to remember just how many as each year seemed a lifetime; they had lived blissfully apart, and only came together when forced. Aside from the occasional correspondence and the unfortunate meetings in London, which oftentimes felt like penance for a multitude of sins he had yet to commit, Derek could almost forget that he was even married at all.

It was quite a wonderful arrangement of his otherwise rather depressing life.

Being in such an arrangement also allowed him ample opportunity to spend as much time as he wished with his friends. At the moment, he was preparing for what was destined to be one of the greatest naps ever taken in the front drawing room of his friend Nathan’s estate, Beverton House. Nathan, the Earl of Beverton, and his new bride Moira were still on their honeymoon trip, and had entrusted the house and repairs to the watchful eyes of Colin Gerrard and himself. Their other compatriots, the ever charming Geoffrey Harris and the less than graceful Duncan Bray, were also around somewhere at present, as each had a strong aversion to being in London without the appropriate company.

They had worked very hard this morning assisting the remaining tenants with their repairs, and Derek, for one, was absolutely exhausted. As fit as he thought himself, Nathan’s tenants were able to outwork him easily. Such strenuous physical labor was not something Derek was accustomed to, though he didn’t object to it. His father would have been furious and appalled had he knowledge of it. If he were to be perfectly honest with himself, Derek would have to admit that was part of the attraction.

“D’you know, I think that Nate’s going to stay away forever and leave all of this mess to us to take care of,” Colin announced from his position on the sofa in the corner.

Derek grinned and opened one eye to look at his friend. “What, you think he is intentionally prolonging this honeymoon trip purely to avoid all the work here for him to do?”

“Exactly,” Colin said, pointing a finger and giving him a calculating look.

A disbelieving snort escaped Derek as he settled himself deeper into his chair and adjusted his feet on the ottoman before him. “I doubt that very highly.”

“Why? It’s not as though he’s made an effort to be here with all of this work.”

Derek leveled a knowing look at him. “Have you seen the way those two look at each other? They’re taking their time, all right, but not to avoid work here.”

Colin snickered and shook his head. “Point taken, but you forget he was gone for two weeks before Moira ever came storming back.”

“Yes, but he was
with
Moira most of that time,” Derek pointed out, gesturing with his hands slightly. “You can hardly blame him. Would
you
want to spend time with us when you could spend time with her?”

“Oh, come off it. You’re not still upset that Moira called you a frog, are you?”

“And the difference there is…?”

Colin sniffed in a rather indignant manner. “Well, if you don’t know, then I am not going to tell you.” He sighed moodily and folded his arms. “I fail to see why any of us have to bother with wives anyway.”

“Are you truly complaining because Nathan got himself a wife, and now he is slightly less available than before?” Derek asked in disbelief. “I’ve never seen him happier than he is now, and you must admit that Moira has done that for him.”

“You’ve got a wife, and it’s hardly done any wonders for you.”

Derek glowered. “What I’ve got is a bad case of some horrible growth that no physician can remove.
That
is not a wife.”

Colin laughed out loud. “Oh, come on, Derek. You have got to admit that Katherine is pretty enough.”

“For what? Beauty is in the eye of the beholder, and woe unto any man that beholdeth that tyrannical hag, for they will not only turn to stone, but a gargoyle to boot.”

Colin was laughing too hard to make any further comment, and Derek found himself smiling a touch to himself. Katherine had but two purposes in life; producing the heir to the dukedom, and driving Derek’s sanity to its breaking point and beyond. He shuddered at the very thought of the first, and the second… well, he shuddered a bit at that, too. He rather liked his sanity as it was.

To be perfectly fair and honest, Katherine was the perfect marchioness, and would be the perfect duchess one day. She knew every single detail of the estates, knew the names of every family under their care, and kept a very neat and careful tally of every item or detail that would require his direct attention.

Her letters every month were brusque and formal, rather business-like, and undeniably cold. He could almost smell her disapproval oozing in every ink stroke. Not that he was lax in his duties, for he was quick to respond to anything that was required of him, and, as was evidenced by his recent activities, he had no qualms about getting his hands dirty as the case required.