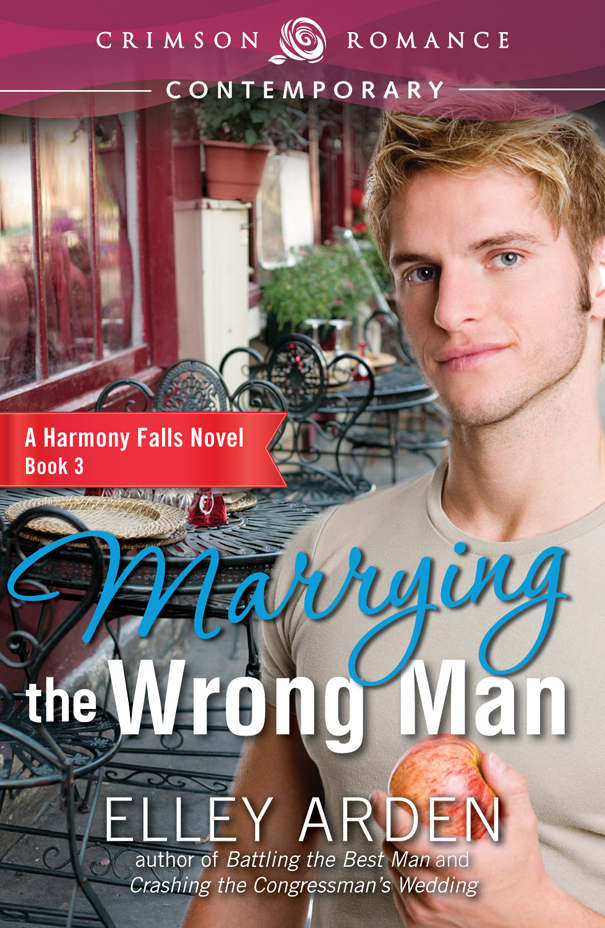 To Ange, Cyndi, Jackie, Sue, and Tammy. Good girlfriends are hard to find. I’m so glad I found you. Thank you for cheering me on. XOXO

This book proves the sheer power of readers. After the first Harmony Falls book,
Crashing the Congressman’s Wedding
, so many of you wrote about your love for Charlie and your hopes that he would get his own book, that I couldn’t ignore you. I hope I’ve done him justice.

Thank you for reading and taking the time to share with me how the characters and stories touch your lives. You touch mine.

“There must be a mistake,” Morgan Parrish said, as she blinked at the dull quarter in the palm of her hand.

“No mistake,” the perky credit union teller replied. “Up until five seconds ago, the account balance was twenty-five cents.”

Morgan’s stomach flipped, causing a tidal wave of panic to obliterate rational thought. “That can’t be. Check again.” She leaned so far over the counter that the teller backed away. “Something is wrong with your screen. You’re missing zeros. Lots of zeros. This account was established the day I was born. I’ve never made a single withdrawal in thirty-two years!”

“But the joint account owner, Kathleen Parrish, has.” The young woman, who Morgan had picked expressly because she didn’t recognize her, studied her computer screen. “According to our records, she withdrew twenty-five thousand dollars two months ago.”

Morgan clawed at the V-neck of her sweater. That was impossible. “My mother hasn’t been anywhere near Harmony Falls in years.” At least as far as Morgan knew … but these days she was so far out of the family loop, anything was possible.

Her father’s arrest two weeks ago had come as a complete shock. She’d been the last to know he’d been taking bribes for more than five years, even when he’d been mayor of Harmony Falls. And then last week, out of the blue, her mother and uncle disappeared after being traced to an international flight. Why shouldn’t she be the last to know her mother fled the country and cleared out the savings account, too?

“Is there a problem?” A familiar voice came from behind the teller.

Morgan cringed. Mary Kemper, the credit union manager, had been one of Morgan’s mother’s snobby friends. Mary glanced at Morgan only briefly, and for one blissful second, she thanked the lord for that extra thirty pounds she’d been wearing since Charlotte’s birth. But then Mary looked up again.

“Morgan Parrish, is that you?” Her eyes widened as she gasped. “Well, I’m … ” Her words tapered off as the shock faded, and her natural arrogance reasserted itself with a cold lift of her chin. “Is there a problem?” she asked again, as if—on second thought—she didn’t know Morgan Parrish from “Adam.” Probably because the daughter of a felon and a potential fugitive wasn’t the most respectable person with whom to conduct small talk.

Well, screw that. Morgan only had twelve more hours in this town, and these days, she had more to worry about than what the country club set wagged their tongues about.

“Fine.” How could one word be so painful it wrinkled every ounce of real estate on the woman’s face?

The teller tapped a perfectly manicured nail against the screen, speaking in a nervous, hushed whisper. “Ms. Parrish was unaware of the large withdrawal made two months ago.”

Mary peered at the screen, and her lips curled. “Well, unfortunately, this account does not require signatures of both account holders for withdrawal. Your mother was within her legal boundaries to withdraw the money.” She coughed into her hand.

Legal boundaries? Ha! What about moral boundaries? Her mother didn’t seem to care about those. And those indiscretions had Morgan in one hell of a bind. “This is bullshit!”

“I’m sure this is a most unpleasant discovery, Ms. Parrish, but there’s no need to make a scene.” The woman flashed a fake, tight smile at the customer behind Morgan, then stepped closer and lowered her silky voice to a hiss. “Perhaps your mother decided it was the only way to recoup the money she lost on the wedding after you cheated on the groom. Seems to me
that
started the whole downhill spiral for your family—and this town.”

Ouch.
Not that she didn’t deserve that. But when her daddy had been mayor, nobody would’ve dared to criticize her. What a difference three years made.

Back then, when Daddy said jump, everyone did. Including her. Agreeing to marry the town’s favorite son was the biggest leap of all. Too bad she’d never loved Justin Mitchell as much as her daddy did. If she had, she wouldn’t have had sex with her ex—the town’s bad boy, Charlie Cramer—the night of her bachelorette party and stupidly left that incriminating tiara in his car for his nosy sister, Alice, to find.

“Oh!
Parrish
!” The teller stared at Morgan with a newfound curiosity. “I never made the connection.”

Morgan wished she hadn’t, but since she had, there was no use shrinking from the fact. “Yep, Parrish. Kind of like the F-word in these parts now, huh?”

Mary sneered. “You have a lot of nerve being flippant, dear. Your father’s in jail. Your mother is God knows where. And that plastics plant your family promised would save this town is only half-built and doomed. Do you know how many people had financial ties to the construction alone?”

“My father,” the teller interjected. “He was contracted to do electrical work. He had to layoff half his crew when the plant construction stopped.”

Some of the other tellers and customers moved closer and all of them were side-eyeing this conversation. Morgan chewed the inside of her cheek. Gossip at the country club was one thing, but she didn’t want anyone breaking out pitchforks and torches. Besides, she wasn’t proud of the damage her family had caused. It was just that being flippant felt better than being scared and sad.

Morgan held up her hands in a mea culpa. “Look, I’m sorry about your father. Frankly, I’m sorry about mine, too. There were a lot of victims to his schemes.”
I should know.
“I don’t condone anything he did, and I wasn’t a part of it.”

The man in line behind her scoffed. “Aren’t you legal counsel for your uncle’s corrupt corporation?”

She sighed. “No. I never took that job. I’m not even practicing law anymore.” She’d been fired for taking too much time off when Charlotte had gotten sick with all those recurring ear infections. Which was why she’d needed this money. Without it, she wasn’t sure what came next.

Knowing when the fight was lost, Morgan turned and simply walked out of the bank.

It wasn’t until she was settling back behind the wheel of the Jaguar her daddy’d bought her as a law school graduation present, staring at the beyond-empty gas gauge, that she let her fate sink in.

She was doomed—payback for lying to Justin, cheating with Charlie, and the general self-absorbed bitchiness she’d spread around town before she left.

Please, tell me we’re even now.
“Please,” she whispered as she glanced at the sky. How was she ever going to move on with her life if she kept getting dragged back down?

Her answer was a big fat splat on her windshield, courtesy of a low-flying pigeon.

Straightening her wilted posture on a deep breath, Morgan glanced in the rearview mirror at the empty car seat. She needed to get back to Charlotte. Aunt Phyllis was a stranger to the toddler, and that house—Morgan cringed—was barely fit for the cats let alone a two-year-old.

She probably should have taken Charlotte with her—a lady with a baby got more sympathy, at least—but she couldn’t risk anyone seeing Charlotte until Charlie knew about the little girl.

Morgan dropped her head to the steering wheel and moaned. This was not how things were supposed to go. She was
supposed
to lay low at Aunt Phyllis’s for a couple days, withdraw the money from the savings account, beg for Charlie’s forgiveness, so her conscience would quiet, and decide where to go next. What was she supposed to do now? Extend her stay at Aunt Phyllis’s?

Living in Hell would be happier for a Parrish than living in Harmony Falls.

Considering Morgan hadn’t kept up with regular maintenance on the car, she’d be lucky if she could make it out of town, even if she had someplace else to go. Whatever was causing the engine light to glow would certainly eat up most—if not all—of the measly thousand dollars that remained from selling off almost everything she’d owned.

She slammed the heel of her hand against the steering wheel, giving it a violent shake.
Stupid car.
She couldn’t even afford to take care of it anymore. She should’ve sold it to the senior partner at the law firm when he’d offered to buy it.

Morgan’s eyes widened. Wait a minute. Maybe she could still sell it. If Bryce Becker over at Becker’s Car and Truck would buy the Jag for, say, $25,000, then Morgan could buy a newer, cheaper car and pocket the rest. Hell, if she could walk away with $10,000 after unloading this car and buying a new one, she’d still have enough to sign a lease on a small apartment somewhere far away from this town and her family’s unfolding legal drama.

Hope was not lost, yet.

But it sure did start to slip ten minutes later when Bryce glared at her from across the used car lot. “Well, looky here. A fox has returned to the hen house.” He hiked the shiny black belt holding up baggy dress pants over his beer belly. “I’m surprised a Parrish has the guts to show up in this town again.”

Here we go. “It’s nice to see you, too.” They’d been friends once. Even went to a homecoming dance freshman year.

“I wish I could say the same, I do. But your daddy screwed us over good. Promising to get that plastics plant and all them jobs for us. Said he’d do more as a congressman than Justin Mitchell ever did, and he’d take Harmony Falls along for the ride.” Bryce snickered. “Well, he took us for a ride, alright. All the way to prison.”

She gritted her teeth. “I don’t agree with what my father did.” She didn’t even know the details. Their relationship had become irreparable the minute she refused to beg Justin to go through with the wedding. “In fact, I haven’t spoken to him since I left Harmony Falls.”

False Premises by Leslie Caine
Stars in Jars by Chrissie Gittins
Ami, el niño de las estrellas by Enrique Barrios
Under the Skin (Ritual Crime Unit) by Richardson, E. E.
Living Dead in Dallas by Charlaine Harris
The Affair of the Mutilated Mink by James Anderson
Prince of Luster by Candace Sams
Dead Unlucky by Andrew Derham
What Came Before He Shot Her by George, Elizabeth
Unforeseen Danger by Michelle Perry