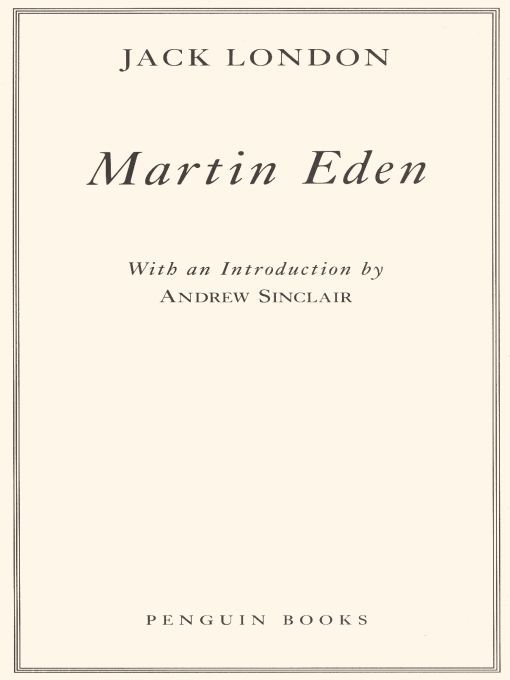 MARTIN EDEN
Jack Londonâhis real name was John Griffith Londonâhad a wild and colorful youth on the waterfront of San Francisco, his native city. Born in 1876, he left school at the age of fourteen and worked in a cannery. By the time he was sixteen he had been both an oyster pirate and a member of the Fish Patrol in San Francisco Bay and he later wrote about his experiences in
The Cruise of the Dazzler
(1902) and
Tales of the Fish Patrol
(1905). In 1893 he joined a sealing cruise which took him as far as Japan. Returning to the United States, he travelled throughout the country. He was determined to become a writer and read voraciously. After a brief period of study at the University of California he joined the gold rush to the Klondike in 1897. He returned to San Francisco the following year and wrote about his experiences. His short stories of the Yukon were published in
Overland Monthly
(1898) and the
Atlantic Monthly
(1899), and in 1900 his first collection, The
Son of the Wolf,
appeared, bringing him national fame. In 1902 he went to London, where he studied the slum conditions of the East End. He wrote about his experiences in
The People of the Abyss
(1903). His life was exciting and eventful. There were sailing voyages to the Caribbean and the South Seas. He reported on the Russo-Japanese War for the Hearst papers and gave lecture tours. A prolific writer, he published an enormous number of stories and novels. Besides several collections of short stories, including Love
of Life
(1907),
Lost Face
(1910), and
On the Makaloa Mat
(1919), he wrote many novels, including
The Call of the Wild
(1903),
The Sea-Wolf
(1904),
The Game
(1905),
White Fang
(1906),
Martin Eden
(1909),
John Barleycorn
(1913), and
Jerry of the Islands
(1917). Jack London died in 1916, at his home in California.
Born in 1935, Andrew Sinclair took his doctorate at Harvard University and Cambridge University and became a noted social historian and novelist. He has written major works on Prohibition and on feminism in the United States and biographies of John Ford and J. P. Morgan. Mr. Sinclair spent more than two years reading all the London family papers before writing his definitive biography of Jack London,
Jack
(1977). Andrew Sinclair has also edited the Penguin edition of Jack London's
The Call of the Wild, White Fang, and Other Stories. 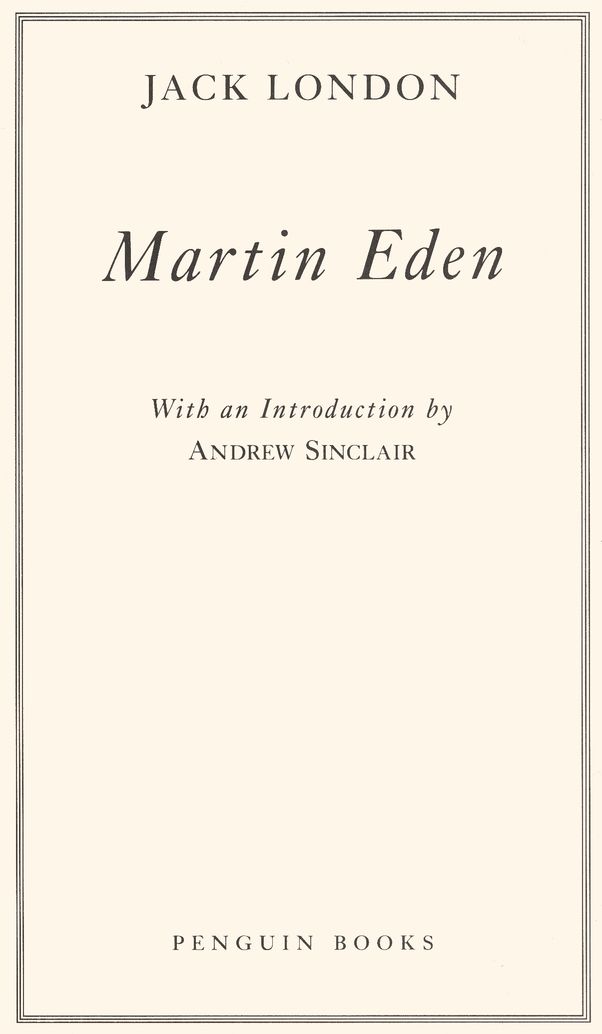 INTRODUCTION
Jack London was a born rebel whose personality demanded the immediate gratification of his contradictory wants. He had a dialectic of appetites without a synthesis of satisfaction. He once confessed to wanting to drive forty horses abreast with the thousand strong arms of his mind; his ambitions in writing and ranching were as excessive as his self-discipline and vigor. Yet his incessant forcing of himself led to occasional nervous collapses into morbidity and despair. Then his horses changed masters. “Satiety and possession are Death's horses,” he wrote; “they run in span.”
Martin Eden
(1909) is London's most autobiographical novel. It describes his struggle for education and literary fame in his youth and his disillusion with success in his middle age. It mythologizes his rise from obscurity and prophesies his early death at forty. The author's passionate identification with his hero, Martin Eden, creates the power and compulsion of the book, which remains today equaled only by Knut Hamsen's
Hunger
as an archetypal study of the urge to write subordinating even the will to live.
London had a hard raising, although not as hard as did Martin Eden, who mysteriously has no parents, only a brood of vagrant brothers and slatternly sisters. London himself was born in 1876 in San Francisco, the only child of Flora Wellman, a spiritualist and music teacher from a middle-class family. His father was probably a wandering astrologer called William Henry Chaney. Shortly after the boy's birth, his mothe married a widower, John London, and her son was given his stepfather's name.
The boy grew up in Oakland and on neighboring small farms. To earn a few dollars, he worked as a newsboy and fought some of the fights Martin Eden fought with Cheese-Face. He had an early love of books and of sailing on San Francisco Bay. By the age of fifteen, he was a delinquent, gang leader, and oyster pirate. Foreseeing an early death on shore, he set off for a seven-month sealing voyage, on which he saw the bloody battle for life between men and beasts. On his return, he worked in factories before joining an army of the unemployed for a march on Washington. A thirty-day jail sentence for vagrancy made him determined to use his mind and avoid the degradation of life as a wage-slave in the Social Pit. He resolved to sell his muscle no more but to become a vendor of brains. Then began for him a frantic pursuit of knowledge.
It is at a similar point in life that London chose to introduce his hero Martin Eden. London himself, supported by his mother and by a job as a school janitor, completed high school, took the entrance examinations for the University of California at Berkeley, and attended classes there for two semesters, grasping at knowledge with the desperation of a drowning man and the arrogance of the self-taught. He met a middle-class family, the Applegarths, and fell in love with their daughter Mabel, whose ethereal beauty embodied the visions of his favorite romantic poets. Browning and Swinburne on the shelves always signified for London a touch of class.
Mabel Applegarth was the model for Ruth Morse in
Martin Eden,
observed with the ruthless hindsight of eleven years' more experience of life. The episode in the novel when Ruth is seen as a woman because black cherry juice stains her lips is based on the moment at which Jack London first saw Mabel “stripping off her immortality.” As he wrote in 1900 to the second love of his life, Anna Strunsky, Mabel seemed very small a mere four years after he first knew her. “Her virtues led her nowhere. Works? She had none. Her culture was a surface smear, her deepest depth a singing shallow. Do you understand? Can I explain further? I awoke, and judged, and my puppy love was over.”
During the time, however, when the young Jack London adored Mabel Applegarth, he was trying to adopt the values of her class and to leave his own. His memory of his feelings explains the marvel of the opening chapters of
Martin Eden,
when the youthful sailor rolls into the Morse household and soon feels like “God's own mad lover dying on a kiss.” Eden's reverence for bourgeois standards and culture mirrors London's own rapture at his first encounter with them. When London described the novel as primarily an attack upon the bourgeoisie and all it stood for, he was not wrong; but fortunately, his artistry and awareness of his former illusions enable him to lurch with his hero through the bric-a-brac and deceits of the Morses' mansion and see all as Camelot and Parnassus.

To Tempt a Saint by Moore, Kate
In Her Day by Rita Mae Brown
Never Loved (Crescent View Academy) by Lucille Wiekel
Black by Aria Cole
This Was A Man by Archer, Jeffrey
A Great Game by Stephen J. Harper
The Destroyer by Michael-Scott Earle
A Warrior's Promise by Donna Fletcher
Ghost Town by Joan Lowery Nixon
Gregory Curtis by Disarmed: The Story of the Venus De Milo