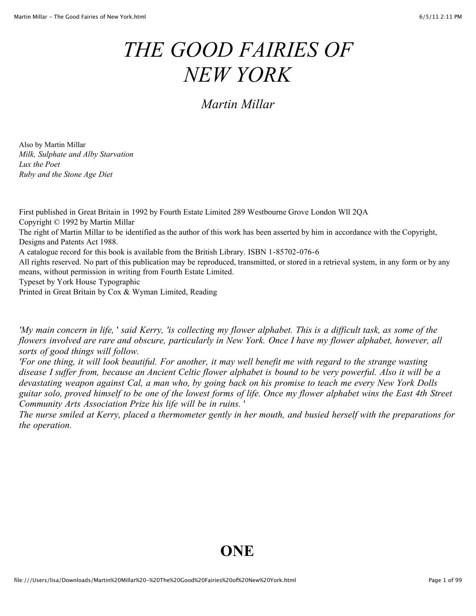 THE GOOD FAIRIES OF

Ruby and the Stone Age Diet

The right of Martin Millar to be identified as the author of this work has been asserted by him in accordance with the Copyright, Designs and Patents Act 1988.

A catalogue record for this book is available from the British Library. ISBN 1-85702-076-6

All rights reserved. No part of this publication may be reproduced, transmitted, or stored in a retrieval system, in any form or by any means, without permission in writing from Fourth Estate Limited.

'My main concern in life,
'
said Kerry, 'is collecting my flower alphabet. This is a difficult task, as some of the
flowers involved are rare and obscure, particularly in New York. Once I have my flower alphabet, however, all
sorts of good things will follow.

'For one thing, it will look beautiful. For another, it may well benefit me with regard to the strange wasting
disease I suffer from, because an Ancient Celtic flower alphabet is bound to be very powerful. Also it will be a
devastating weapon against Cal, a man who, by going back on his promise to teach me every New York Dolls

guitar solo, proved himself to be one of the lowest forms of life. Once my flower alphabet wins the East 4th Street
Community Arts Association Prize his life will be in ruins.
'

The nurse smiled at Kerry, placed a thermometer gently in her mouth, and busied herself with the preparations for
the operation.

Dinnie, an overweight enemy of humanity, was the worst violinist in New York, but was practising gamely when

two cute little fairies stumbled through his fourth-floor window and vomited on the carpet.

'Don't worry,' said the other. 'Fairy vomit is no doubt sweet-smelling to humans.'

By this time, however, Dinnie was halfway down the stairs, and still accelerating.

'Two fairies just came though my window and were sick on the carpet!' he screamed on reaching 4th Street, not fully realising the effect that this would have on the passers-by till the men sweating with sacks round a garbage truck stopped to laugh at him.

The men stared at him. Dinnie's monologue ground to a halt.

'Hey,' called the foreman, 'leave that dumb homo alone and get back to work. C'mon, let's get busy!'

'No, really,' protested Dinnie, but his audience was gone. Dinnie stared hopelessly after them.

On the corner, four Puerto Ricans kicked a tennis ball back and forth. They looked pityingly at Dinnie. Chastened by public ridicule, Dinnie slunk back into the old theatre on the ground floor of his building. His room was right at the top, four flights up, but Dinnie was unsure whether he wanted to climb them or not.

'I like my privacy,' he grumbled. 'And my sanity.' He decided to buy some beer from the deli across the street.

'But if I find two fairies in my room when I get back, there's going to be trouble.'

Five more fairies, all suffering from massive confusion due to beer, whisky and magic mushrooms, were at that moment fleeing in drunken terror from the chaos of Park Avenue to the comparative shelter of Central Park.

'What part of Cornwall is this?' wailed Padraig, narrowly escaping the wheels of a honey-roasted-peanut vendor's trailer.

'The Goddess only knows,' replied Brannoc, and tried to help Tulip, who had become entangled in the dangling

reins of a sightseer's horse and trap.

T think I'm still hallucinating,' whimpered Padraig as a tidal wave of joggers trundled down the path towards him.

He was saved by Maeve, who hurried them on, deep into the undergrowth.

They flopped down to rest on a quiet patch of land.

Noise still surrounded them, but no people were in sight. This was a relief. They were invisible to most humans, but so many hurrying feet were a terrible danger.

'I think so,' replied Brannoc, oldest fairy present and something of a leader. 'But I'm beginning to suspect we're not in Cornwall any more.'

A squirrel hopped over to join them.

'What the hell are you?' demanded the squirrel.

'We are fairies,' answered Brannoc, and the squirrel fell on the grass laughing, because New York squirrels are cynical creatures and do not believe in fairies.

Meanwhile back on 4th Street, Dinnie swallowed a mouthful of Mexican beer, scratched his plump chin and strode confidently into his room, convinced that he had imagined the whole thing. Two fairies were sleeping peacefully on his bed. Dinnie was immediately depressed. He knew that he did not have enough money to see a therapist.

Across the street, Kerry was just waking up in her soft bed of old cushions. Kerry, as well as being wondrously lovely, could pick up some tattered old piece of material and make it into a beautiful cushion, or maybe a hat or a waistcoat, with ease.

She was also a talented painter, sculptor, singer and writer, a dedicated shoplifter, and a serious collector of flowers. And she was a keen guitarist, but her technique was dreadful.

Most people loved her but despite this she was not happy this morning. Her unhappiness stemmed from four main sources. The first was a news report on television about terrible floods in Bangladesh with pictures of bodies which upset her badly, and the second was the chronic wasting disease she was suffering from. The third was her lack of skill on the guitar. Despite hours of practising, she still could not play Johnny Thunders' guitar solo from

The fourth, far outweighing these at the moment, was her complete inability to make up her mind as to what

looked best pinned in her hair: carnations or roses. Kerry's hair was based loosely on a painting by Botticelli and the right flowers were essential.

She sat gloomily in front of the mirror, trying first one then the other, reflecting bitterly that it was no use at all dyeing your hair to a beautiful silvery blue when you still had problems like this to face up to.

The flower alphabet was coming on well and she now had fifteen out of the twenty-seven flowers she required.

Across the street the fairies were waking up.

'Where are our friends?' muttered Heather, brushing her golden hair away from her beautiful eyes.

Dinnie stared balefully at her.

'I don't know what you are,' he said, 'and I don't care. But whatever you are, get the hell out of my room and leave me alone.'

Dinnie MacPherson was not noted for his politeness. He was not really noted for anything except his rudeness, intolerance and large appetite.

'My name is Heather. I am a thistle fairy. And this is Morag. Could I have a glass of water please?'

'What sort of way is that to speak to us?' demanded Heather, propping herself up on a tiny elbow. 'Where we come from anyone would be honoured to bring us a glass of water. They'd talk about it for years if we so much as

appeared to them. We only appeared to you because we heard you playing a Scottish violin tune.'

'Yes,' agreed Heather, 'extremely badly. The violin had an interesting tone, but frankly it was the worst rendition of the "Reel of Tulloch" I have ever heard, and that is saying something. It was worse than the playing of the blacksmith's son back home in the village of Cruickshank, and I wouldn't have thought that was possible.'

'My playing is not that bad,' protested Dinnie.

'Well no one invited you here to listen to it,' said Dinnie angrily.

'Hi,' purred a naked woman on the TV, rubbing her breasts with a phone. 'We're the Cream Team and we give ass, head and pussy so well it's a fucking crime. Phone us on 970 t-w-a-t.'

'I must still be hallucinating,' said Morag. 'I swear I will never touch another magic mushroom. Except possibly for medicinal purposes.'

Dinnie strode up to the bed and loudly requested that Heather and Morag leave immediately as he did not believe in fairies. The fairies burst out laughing.

'You are funny,' chortled Heather, but the action of laughing upset her precarious hangover and she threw up

again, all over Dinnie's arm.

'Well he certainly believes in us now!' screamed Morag.

They both went back to sleep and no amount of abuse from Dinnie could wake them.

The homeless clustered everywhere in New York. Every street corner had its own beggar with dull eyes who

asked passers-by for change with little hope of a response. Every park was laced and ribboned with makeshift

plastic tents and stinking blankets rolled up as sleeping bags. These homeless had the most hopeless of lives. No government scheme would ever give them a fresh start. No charity would ever be rich enough to house them. No

employer would ever give them work without their having a place to live, or at least some clean clothes, and clean clothes were never going to appear to anyone who sweated all day in a swelteringly hot park. All they could do was get by the best they could until they died, and this did not happen nearly quickly enough as far as the decent citizens of New York were concerned.

One homeless old man sat down for a rest on 4th Street, sighed, closed his eyes, and died.

'Another one dead,' muttered Magenta, arriving on the scene. Magenta herself was a homeless beggar, though a

'At this rate I'll have no troops left.'

She saluted the fallen warrior and toiled her way along to Broadway, keeping a wary eye out for Persian cavalry divisions. Even though she was still some way from the army of Antaxerxes and was not expecting trouble, she

knew that being this deep inside enemy territory she had to be careful.

Back in England, in Cornwall, Tala the King was most upset at the flight of Petal and Tulip. As his children and rightful heirs they were already being whispered of by rebels as suitable replacements for himself.

'Find them,' he instructed Magris, his Chief Technician, 'and bring them back.'

Of course, the Fairy King of Cornwall could not know that at this moment two of the fugitives were waking in an empty room on 4th Street.

They immediately began to argue.

'Well, it's your own fault,'said Morag. 'The way you were throwing back mushrooms and whisky.'

'What do you mean? You were the one who vomited over your new kilt.'

'I did not. It was you. You can't take your drink. Just like the well-known saying, never trust a MacKintosh with a glass of whisky or a fiddle.'

'That's not a well-known saying.'

'Morag MacPherson, you will be the death of me. And if you insult the MacKintoshs' fiddle playing one more

time, I will be the death of you.'

'There is no fiddle playing to insult.'

They glared at each other.

'What happened to the others?'

'I don't know. We lost them after you fell unconscious and I had to help you.'

'I did not fall unconscious, you did. No MacPherson fairy can hold her whisky.'

'Any MacPherson can hold it better than a MacKintosh,'

The argument intensified until it became too much for their hangovers. Heather swore an obscure Scottish oath and stumbled off the bed, rubbing her temples. She approached the window. The wings of a thistle fairy are useful only for short flights at the best of times and now, weakened by mushrooms, whisky, beer and jet-lag, Heather had a hard time fluttering up to the window-sill.