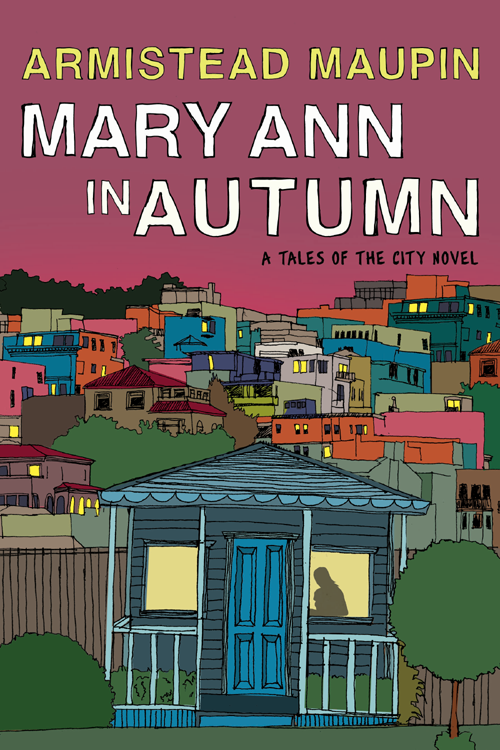 A TALE OF THE CITY NOVEL

We shall not cease from exploration
And the end of all our exploring
Will be to arrive where we started
And know the place for the first time.

Chapter 2 - The Politics of the Park

Chapter 6 - Not to Be Alone

Chapter 7 - Somebody to Hang With

Chapter 17 - A Thing About Cliffs

Chapter 28 - The Last Thing She Needed

Chapter 29 - The Way She Wanted It

Chapter 30 - The Anna She Remembered

Chapter 32 - Back Before Bedtime

Chapter 35 - All the Man Stuff

T
here should be a rabbit hole
was what she was thinking. There should be something about this hillside, some lingering sense memory—the view of Alcatraz, say, or the foghorns or the mossy smell of the planks beneath her feet—that would lead her back to her lost wonderland. Everything around her was familiar but somehow foreign to her own experience, like a place she had seen in a movie but had never actually visited. She had climbed these weathered steps—what?—thousands of times before, but there wasn’t a hint of homecoming, nothing to take her back to where she used to be.

The past doesn’t catch up with us,
she thought.
It escapes from us.

At the landing she stopped to catch her breath. Beneath her, the street intersecting with Barbary Lane tilted dizzily toward the bay, a collision of perspectives, like one of those wonky Escher prints that were everywhere in the seventies. The bay was bright blue today, the hard fierce blue of a gas flame. If there was fog rolling in—and there must be, given the insistence of those horns—she couldn’t see it from here.

When she reached the path at the top of the steps, one of her heels got stuck in the paving stones. Yanking it free with a grunt, she chided herself for not leaving her Ferragamos back at the Four Seasons. Those stones, if memory served, had been used as ballast on the sailing ships that came around the horn—or so her landlady Mrs. Madrigal had claimed, once upon a time. Twenty years later the chunky granite blocks looked suspiciously ordinary, like the pavers in her driveway back in Connecticut.

As soon as she caught sight of the lych-gate at Number 28, a flock of wild parrots swooped low over the lane, cackling like crones. Those birds—or ones just like them—had been here when she was here, long before they became global celebrities in a popular documentary. She remembered how proud she had felt when she saw that film in Darien, and how utterly irrational that feeling had been, as if she were claiming intimacy with someone she had known slightly in high school who had grown up to be famous.

Those birds did not belong to her anymore.

The lych-gate was the same, only new. The redwood shingles on its roof had been crumbly with dry rot when she moved to the East Coast in the late eighties. Now they were made of slate—or a good imitation thereof. The gate itself, once creaky but welcoming, had been fitted with a lock and a buzzer and something under the eaves that looked like a security camera. So much for a quick snoop around the garden.

She peered through a hole in the lattice at what she could see of the house. The shingle siding had been replaced, and fairly recently. The trim around the windows was painted a hard, glossy black. There were now French doors opening onto the courtyard in roughly the spot where Mrs. Madrigal’s front door had been. (Had anyone even thought to save that door with its wonderful stained-glass panels?) Most of the outside stairways, she noticed with a shiver, had been removed or modified to serve the transformation of an apartment house into—what was the official term?—a Single-Family Dwelling.

We had been a family,
she thought.
Even in our separate dwellings.

From this angle, of course, she couldn’t see the little house on the roof, the funky matchbox studio Mrs. Madrigal’s tenants had referred to as “the pentshack.” Her guess was it no longer existed, given the extensive nature of this remodeling. It had probably been replaced by a deck—or another floor entirely—and she wasn’t sure how to feel about that. Her memories of the place held both dread and delight.

T
WO BLOCKS AWAY, WHILE LOOKING
for lunch, she found the corner mom-and-pop still intact, still called the Searchlight Market. Next door her old Laundromat had been stylishly renovated and a little too cutely renamed “The Missing Sock.” It pleased her to find the original thirties’ lettering still silvering the plate glass at Woo’s Cleaners, though the place was obviously empty. The windows were blocked by pale blue wrapping paper, the very paper her laundry had once been wrapped in. Across the street, a pristine gallery of tiny
objets
had sprouted next to what had once been Marcel & Henri, the butcher shop where she had sometimes splurged on pâté, just to keep from
feeling
like a secretary.

And there was Swensen’s, the ice cream shop at Hyde and Union that had been her consolation on more than one Saturday night when she had stayed in with Mary Tyler Moore. This was the original Swensen’s, the one Mr. Swensen himself had opened in the late forties, and he had still been running it when she was here. She was about to stop in for a cone, just for old times’ sake, when she spotted the fire trucks parked on Union.

Rounding the corner, she found dozens of onlookers assembled beneath a big sooty hole on the second floor of a house. The crisis seemed to have passed; the air was pungent with the smell of wet embers, and the firemen, though obviously weary, were business-as-usual as they tugged at a serpentine tangle of hoses. One of the younger ones, a frisky Prince Harry redhead, seemed aware of his lingering audience and played to the balcony with every manly move.

We do love our firefighters,
she thought, though she had long ago forfeited her right to the Municipal We. She was no more a San Franciscan now than the doughy woman in a
SUPPORT OUR TROOPS
sweatshirt climbing off the cable car at the intersection. She herself hadn’t used a cable car for years, yet every handrail and plank was as vividly familiar as her first bicycle. This one had a light blue panel along the side, marking it as a Bicentennial model. They were built the year she’d arrived in the city.

She waited for the cable car to pass, considering something that eventually sent her into Swensen’s to address the middle-aged white man behind the counter.

“I used to order something here,” she said, as winsomely as possible, “but I can’t remember the name of it. It was thirty years ago, so you may not . . .”

She gaped at him. “How on earth did you do that?”

He shrugged. “It’s the flavor people can never remember the name of.”

He made her a sugar cone with a single scoop. Without tasting it, she carried it half a block to Russell Street, the little alley off Hyde where Jack Kerouac had been holed up for six months in the early fifties, working on a draft of
On the Road
. Her first husband, Brian, had brought her here when they started dating, since the place held great significance for him. Standing before the A-frame cottage like a pilgrim at Lourdes, he had told her only that Neal Cassady had lived there, and she, God help her Cleveland soul, had asked if that was one of David Cassidy’s brothers. He was gentle about it at the time—he wanted to get laid, after all—but he wouldn’t let her forget it for years. Had she paid more attention to that moment and what it said about both of them, she might have saved them from a marriage that was pretty much doomed from the start.

Now, according to the daughter they had adopted, Brian was out living his own version of
On the Road
, driving his beloved Winnebago from one national park to another, apparently more at ease with life than he had ever been. He was seven years older than she, which made him sixty-four now, an age that could only be darkly ironic to a boomer who was finally facing it.
Will you still need me? Will you still feed me?

Leaving the Cassady cottage, she headed down the street with her ice cream, finally reuniting with the dark citrus tang of Swiss Orange Chip. The taste of it, as she had suspected, swept her back on a tide of subliminal memory to a much younger self.

It was the taste of a lonely Saturday night.

B
ACK AT THE
S
EARCHLIGHT SHE
bought a turkey sandwich and ate it by the tennis courts in the leafy little park at the crest of Russian Hill. For a moment she considered taking the cable car to the Wharf for an Irish coffee at the Buena Vista, but that would only delay the deeply unpleasant mission at hand. She had told her Mouse she’d explain everything as soon as she hit town, and since she’d been sobbing the last time they talked, postponement was no longer an option. But how she dreaded putting it into words.

She dug her iPhone out of her shoulder bag and dialed his number. It rang six or seven times before he picked up: “Mary Ann?”

“Thank God. I was starting to worry.”

“Are you at the Four Seasons?”

“Do you wanna come here?”

“Yeah. Ben’s at the dog park. We’ll have the place to ourselves.”

That was something of a relief. Ben was a lovely guy, but what she had to say would be hard enough to share with
one
person.

If Only by Lisa M. Owens
Wolf Tracks by Vivian Arend
Vixen in Velvet by Loretta Chase
Legion and the Emperor's Soul by Brandon Sanderson
Betrayal by John Lescroart
Margaret and the Moth Tree by Brit Trogen, Kari Trogen
Owning His Bride by Sue Lyndon
The relentless revolution: a history of capitalism by Joyce Appleby, Joyce Oldham Appleby
AbductiCon by Alma Alexander
Hearts on Fire by Alison Packard