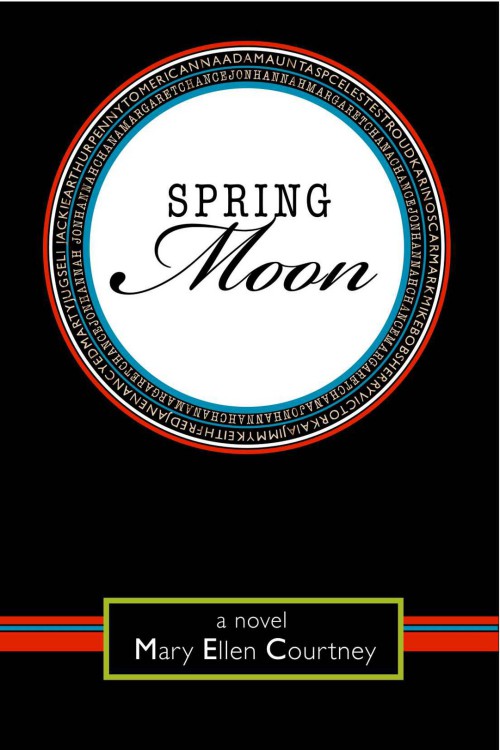 It only takes a few minutes to get married. Being married takes the rest of the minutes.
The reality of marriage was not what Hannah Spring had in mind when she blithely swapped rings with her husband, a man who had been divorced for so long, her only real thought about his ex-wife was that she was annoyingly beautiful. But she lived far, far away, as did Hannah's former lover from a still perplexing, and never discussed, liaison.
Then things change for her husband's ex, and his past crashes over their seawall and boils through the safe harbor of their present. It had never occurred to Hannah that his ex-wife could rip the Band-Aid off her history, much less endanger her life and limb.

Books by this Author
Spring Moon
Wild Nights
Praise for
Wild Nights
2013 Winner Indie Excellence Award for Fiction
2013 Silver Medal Global eBooks Award for Fiction
2013 Fore
Word
Review Finalist Best New Fiction
“What a page-turner! If you’re looking for a book that is both tremendously entertaining and also insightful, sensitive, and thoughtful, Wild Nights is the ticket.” –– Carol Costello, Author of “Chasing Grace”
“I spent all day yesterday wrapped up in Wild Nights and reluctantly finished the last page late last night, Hannah and Jon and the rest of the characters peopling this work still alive and fresh in my mind. This is an extraordinary work.” –– Jack Magnus
“In Wild Nights, by Mary Ellen Courtney, readers are taken on a journey of personal understanding. From the first page, I found myself totally captivated by Wild Nights. Humor is interspersed between intense situations and vividly described scenery. I enjoyed having the opportunity to read a great fictional novel. This is definitely a novel that will be savored by the reader.” –– Paige Lovitt
“Mary Ellen Courtney is a new talent to be reckoned with in the writing industry.” –– Lit Amri

Spring Moon
Copyright ©2014 by Mary Ellen Courtney
No portion of this work may be reproduced or transmitted in any form or by any means, electronic or mechanical, including photocopying and recording, or by an information storage or retrieval system without written permission from the author.
This novel is a work of fiction. Any reference to real people, events, establishments, organizations, or locales are intended only to give the fiction a sense of reality and authenticity, and are used fictitiously. All other names, characters, and places, and all dialogue and incidents portrayed in this book are the product of the author’s imagination.
First edition, 2014
ISBN: 978-0-9889536-1-1
Porter Chance Books
Friday Harbor, WA
www.porterchancebooks.com
For WRF …
always
“New love is the brightest and long love is the greatest.
But revived love is the tenderest thing known on earth.”
Thomas Hardy
“I got gaps; you got gaps; we fill each other’s gaps.”
Rocky Balboa
Table of Contents

The crackpot living in my head thinks she’s watching a documentary. She’s not. It’s a high-concept drama. The actor is so convincing she could be Meryl Streep. Totally sucks me into concept as reality in full length, high-def Dolby surround sound, and it’s interactive. For example, I knew I wasn’t having a Woolly Mammoth, it was a baby boy named Chance. If he’d really been a Woolly Mammoth we would have named him something more robust
.
Maybe
Chance Dodge Durango With Tan Leather Seats
in honor of where he sparked to life.

The curtains in our room at the birthing center were closed to filter the Hawaiian sun. Silky cotton, flowered orange and yellow, sailed softly in the honey breeze coming through the open window. A compilation CD played low with Adele, slack key, and Pink Floyd’s “Great Gig In The Sky.”

I was in the birthing tub great gig moaning through labor. When I wasn’t thinking about the concept of pain, I was thinking about reincarnation. Jon, my husband and the man responsible for all the moaning that got the baby in, and now out, wiped my brow.

“No idea,” he said. “Unless he’s the next Dalai Lama, we’ll probably never know. You want an ice chip?”

Meggie was our daughter, named after my surrogate mother Margaret. He slid an ice chip between my lips. Jon had been a deer in his previous life. Either that, or he’d misunderstood the Buddhist astrologer who cast his horoscope in India. The way he loved his paddleboard I thought he’d been a gondolier. He was sure he’d heard deer. The astrologer even waved his fingers over his head to indicate antlers.

The idea that he’d been a deer was curious. Before I met Jon the Deer, I’d had a brief bout of wild sex with a guy who drove a John Deere truck who I met, no surprise, at a truck stop. Not my usual hunting ground. I still had no idea how to interpret the Deer-Deere crossroad in my life.

Meggie was conceived in India the same week Jon found out he’d been a deer. We’re almost certain it was the same night I lit the fire under Margaret’s funeral pyre, an experience that is oddly intimate with the cosmos. Jon was only there a week, but as we say in the film business, it was action-packed. I thought that Meggie might be Margaret on a return trip to earth. She was strong-willed enough for it, they both were.

A contraction hit me, but not even my moan could drown out Jon’s phone vibrating and flashing in circles on the nightstand like an angry bee missing a wing. He dove and caught it just before it went over the edge, glanced at the screen, frowned, and put it in the pocket of his drawstring pants. He sat down again, rinsed off his hand, and wiped my brow as the contraction passed. I looked at my kneecaps sticking out of the water while I waited for the next mind-erasing wave.

“Nobody. You need anything?”

I started to say no, but a new contraction turned it into a long guttural moan as good old Mother Nature put the squeeze on me. I’d watched an actress do some unbelievably convincing seizures once. She said it was easy; she just called up being in labor. It wasn’t that bad. I’d spent many days behind the scenes watching actors ply their trade.

Margaret and I were production designers on a film just finishing on the banks of the Ganges when she died. She enlisted the help of her husband, Ed, who is like a father to me. He made sure her wish was fulfilled, that it was I who lit the fire. He turned it over to the Director. I did it. Nobody bucks the Director.

Rainbow gods and goddesses with twenty arms, elephant trunk noses, and monkey faces populate an ephemeral Indian world of billowing incense and piles of marigolds. It’s strange and beautiful even if, like me, you have no idea what it all means. Letting Margaret go was wonder-full. I thought maybe I’d wake up one day shocked that I had done it, but so far it still felt as natural as it had on that afternoon of my life.

I took time off work to have Meggie, a sure way to never work again in my business, but the story of lighting the fire made the front page of the film trade papers and gave me a reputation for grit that was hard to ignore. I was still offered work.

He went for our midwife, Johanna, who put a baby monitor on my belly.

“That’s not likely, Hannah,” she said, in her soft Birkenstocks voice.

She nodded and smiled. Johanna’s concept of birthing is a fun day, kind of like sex in reverse. Everyone says that, like everything else in life, it will be more fun in direct proportion to the number of years between reality and memory. They may be right. Meggie was four, and I’d forgotten how that went. We rock tumble memories in our brains, polishing the dull spots and blurring the embarrassing bits, to stupidly keep alive the better-than-now, worse-then-now, realities of our life. While now slides by.

Johanna told me to hop out of the tub. Hop? Jon helped me wallow out of the tub and assume the position, hands and knees on the floor. Johanna got on the floor behind me, plunged her hands into me to turn the Mammoth’s shoulders, and put her feet up on my ass. She’d perfected the maneuver getting Meggie out. Jon said it looked exactly like something a barn vet would do.

“This is so embarrassing,” I said. “Turn around, Jon.”

“I need the leverage,” grunted Johanna. “He is really stuck. Okay, Hannah, I need you to push.”

“Meggie looked like an alien with just her blue head sticking out,” said Jon.

I burst out laughing.

“Oh my god, Jon. She was oxygen deprived. They’re your broad shoulders.”

I looked back over my shoulder. Johanna was on her butt, shooting away from me on a slip ‘n slide of slush, holding tight to the baby’s shoulders. He looked like he was flying. I crawled backwards as fast as I could to keep up with them. Jon was keeping up next to us in case Johanna lost her grip and he needed to catch Chance. His phone buzzed away in his pocket next to my ear.

He cradled his slippery son, and gazed at the new Moon with the same look he’d had when Meggie was born, pure rapture mixed with instant worry.

He carefully handed Chance to Johanna and helped me up just as the afterbirth made its appearance. He held my hand as we slid our feet through slippery smush and off the plastic. It reminded me of one especially crash prone day we’d had skiing. He smiled at me.

Red Iron Nights by Glen Cook
Love Lust by Unknown
Anne Barbour by Step in Time
A sangre y fuego. Héroes, bestias y mártires de España by Manuel Chaves Nogales
The Dead I Know by Scot Gardner
Twice Kissed by Lisa Jackson
The Misadventures of Ka-Ron the Knight by Kirch, Donald Allen
Zoran Chronicles Volume 1 A Dragon in Our Town by Broquard, Vic
Murder of a Royal Pain by Swanson, Denise
Across the Long Sea by Sarah Remy