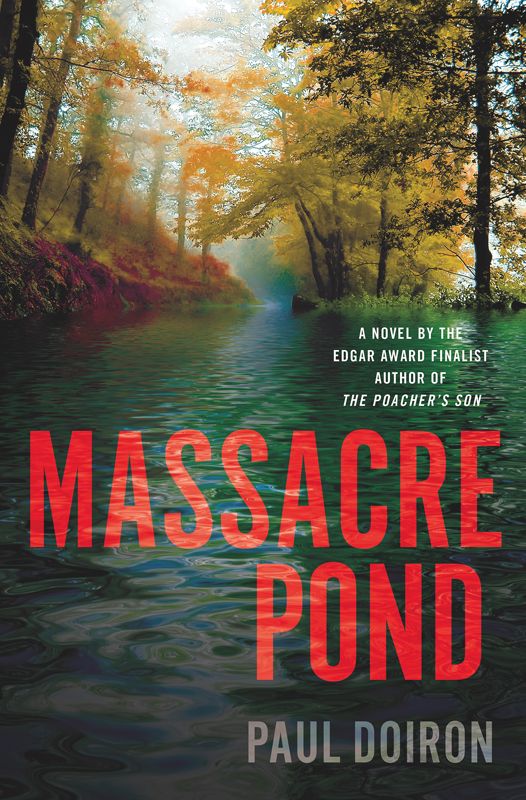 For Daniel Lee, who always believed

Nature looked sternly upon me on account of the murder of the moose.

The first time I laid eyes on Billy Cronk, I thought he was the biggest badass in the Maine woods: six-five, braided blond hair, a tangled mess of a beard. He had arms that could have snapped a two-by-four over his knee for kindling. The night I arrested him for hunting on posted property, I kept my hand close to my pistol, wondering if this wild blue-eyed bruiser would be the death of me.

As a game warden, I’d met more than my share of roadhouse brawlers and die-hard deer poachers, and I understood that most violent men are cowards. Billy Cronk was different. He never doubted his physical prowess and had no need to prove himself against lesser men. He accepted the summons I wrote without forcing me to wrestle him into handcuffs. In fact, he thanked me for it, lowering his eyes out of embarrassment. The more I learned about the man, the more he surprised me.

He’d been a rifleman in Iraq and Afghanistan, and one of his duties had been picking up the pieces of friends blown up by roadside bombs. Back home in Maine, working as a hunting and fishing guide, he’d gutted his share of black bears and hoisted them on a pole for smiling hunters to pose with for photographs. He’d seen coyotes disembowel fleeing deer they’d chased onto frozen lakes, leaving bloody paw prints on the ice. Once, while fly-fishing, he’d watched a school of bass gulp down a row of ducklings while the mother beat the water with her wings. Billy Cronk understood that nature was as indifferent to the moral sensibilities of twenty-first-century human beings as humans themselves were.

Our friendship had taken us both by surprise, since I was the game warden who’d gotten him fired from his job at the Call of the Wild Game Ranch. At my urging, in exchange for dropping the illegal-hunting charge, he had informed on his asshole boss for various crimes and misdemeanors, the least egregious of which was letting loose a live skunk in the trailer of the district game warden (me). When his employer told Billy to go to hell, the news hit him hard. Despite all the atrocities he had witnessed, there was a surprising innocence about the man, as if he never expected the worst from anyone, and so found himself on the receiving end of one disappointment after another. It was in his makeup to be continually heartbroken.

Billy had avoided me for the first few months after his termination, but we’d kept running into each other on the same trout streams, and eventually we struck up a conversation that revealed we shared a favorite book, an obscure Siberian adventure called
Dersu the Trapper.
I had never taken Billy for the literary type. His first take on me was equally unflattering. In his estimation, I had a stick permanently wedged halfway up my ass. But we were the same age—twenty-six—and loved the North Woods in a way few other people seemed to understand.

The last time I’d visited his house, I’d come upon him stripped to the waist, chopping firewood in the backyard. The glittering late-autumn sunlight made his tanned arms and chest look like they’d been cast in bronze. Billy usually wore his long hair in a braid, but he’d let it loose for the afternoon, and my first impression, when I saw him whaling away with an ax on a defenseless hunk of oak, was of a Viking marauder driven into a frenzy by vengeful gods.

Every law officer understands the danger of making quick assumptions, but this truism applied to my new friend in spades. His sheer size and resemblance to the Mighty Thor gave him a dangerous aura, especially when you caught sight of the KA-BAR knife strapped to his thigh. In a crowded roadhouse, Billy could reduce the loudest biker to silence just by fixing him with a pale, cold stare. But I had seen tears in those same eyes while he watched his kids chasing each other like puppies around the picnic table and his soft-hipped wife, Aimee, served us Budweiser tall boys.

“Sometimes I forget, though.”

“You’ve got five reminders right there,” I said, indicating his wife and children. The blond kids were all under the age of six, dirty-faced, and confusingly similar in appearance. Billy called them the “Cronklets.”

“I wish I could do better for them,” Billy said in his thick Down East accent. “A man should be able to provide for his family. Something’s wrong with him if he can’t.”

I was between girlfriends myself, and the thought of a family of my own seemed like one of those empty promises doctors offer at the bedsides of dying patients. “There’s nothing wrong with you, Billy.”

My friend smiled, trying to humor me, but I knew he was unable to accept my assurances.

I couldn’t really blame him. I’d grown up poor myself and understood what it was like to feel the constant anxiety of unpaid bills and empty cupboards. Before my mother grew sick of my father’s abuse and alcoholism and filed for divorce, we’d lived a lot like the Cronks—holed up in drafty cabins we couldn’t afford to heat, and wearing secondhand clothing scavenged from boxes in church basements. Just that week, I’d seen Aimee Cronk at the supermarket in Machias paying for her groceries with one of those EBT food-stamp cards, and I suspected that Billy might still occasionally poach some deer for the freezer (he and I had our own don’t ask, don’t tell policy). It had taken him six months to land another job after Joe Brogan fired him.

“How’s work going?” I asked as we stood over the sizzling grill, turning venison hamburgers.

I rubbed my newly barbered crew cut. “What do you mean?”

He lowered his voice so Aimee wouldn’t hear. “Yesterday, Ms. Morse made me open a package that came in the mail. She thought it might be a pipe bomb or something. I told her we should dip it in the bathtub first, just to be safe.”

“An old book her friend bought at some auction, paintings of birds by that guy Audubon. It got kind of waterlogged. Ms. Morse threatened to deduct the cost from my paycheck. She pretended she was joking, but you can never tell with her.”

I swatted a no-see-um that had alighted behind my ear. “She didn’t recognize her friend’s handwriting on the package?”

“I can’t say I blame her for being paranoid.”

Elizabeth “Betty” Morse had built a log mansion on Sixth Machias Lake on a pine-shaded point where a historic sporting camp had stood for more than a century, and now she required a considerable domestic staff to help run the property. I’m not sure what Billy’s official job title was, but he seemed to function as her personal driver, handyman, and forester—his duties dictated by the needs of the day. Increasingly, he also served as her bodyguard.

Betty Morse needed guarding. She was a former hippie who had started a small business selling dried herbs at farmers’ markets. In time, she hired some local women to help produce various types of organic teas, which she peddled to natural-food stores, first in Maine and then around the country. Eventually, she opened a factory somewhere out of state—down south, I think—and began manufacturing herbal health supplements. These pills won the endorsement of Hollywood celebrities, who, in turn, made the brand a hit with a nation of dieting housewives. When EarthMother, Inc., went public,
The Wall Street Journal
said Betty Morse netted half a billion dollars. She gave away some of the money to animal-rights groups and used another chunk to purchase 100,000 acres of Down East timberland, which she’d promptly declared off-limits to loggers, hunters, all-terrain-vehicle riders, fishermen, and snowmobilers. Her intention, she announced, was to donate the land to the federal government to create a new national park where timber wolves and woodland caribou would once again roam free.

The idea hadn’t gone over well with my neighbors, many of whom were employed by the woods-products industry and didn’t know where to ride their ATVs or shoot their AR-15s now that “Queen Elizabeth” had cordoned off half of Washington County. Morse told them not to worry; she promised a sunny economic future in which they would sell goods and services to crowds of tourists eager to experience a brand-new wilderness within a day’s drive of Boston. Her de facto subjects greeted this promise with skepticism, to say the least.

I was doing my best to withhold judgment on the idea, but it wasn’t easy staying out of arguments. Elizabeth Morse was the number-one topic at every diner and bait shop I visited that fall.

The number-two topic was the weird October heat.

No one in Maine could remember an autumn this insufferable. Johnny-jump-ups were jumping up for the third time outside the Washington County courthouse, and the persistence of mosquitoes in the woods behind my cabin seemed less like an annoyance and more like an ominous disruption in the natural order of things. Frustrated moose hunters blamed the seventy-degree heat for the refusal of the big bulls to leave the coolness of the peat bogs and move to the upland clear-cuts, where they could be dispatched (illegally) from the backs of pickup trucks. Even the old cranks down at Day’s General Store muttered the words
global warming
without their usual sneers.

Every day, going on patrol in my shirtsleeves and orange hunting vest, I experienced a sense of temporal dislocation. The foliage was fading in the treetops, and yet the sun continued to blaze like a frying pan left too long on the stove. Sooner or later, I knew, we would pay a price for this never-ending Indian summer.

So when Billy Cronk called to say that he’d stumbled on something bad on the Morse property, I figured the bill might finally have come due.

“It’s bad, Mike,” he told me in a quavering voice I’d never heard from him before. “Wicked bad.”

But what I found on Betty Morse’s estate was more than bad. It was evil.

Billy wouldn’t get into details over the phone, but he said he’d meet me at Morse’s new gate—the one that blocked access to the south shore of Sixth Machias Lake.

My patrol truck was making a shrill noise that might have been a loose belt or a dying scream—I wasn’t sure which. The old GMC was covered with “warden pinstripes” from where bushes had scratched green paint from its sides, and it had a fist-size dent in the middle of the Department of Inland Fisheries and Wildlife logo on the door. I’d put in a request for a new vehicle over the summer but held out little hope of seeing a replacement, not while my own future continued to be in doubt.

Carter: The Sinner Saints #1 by Adrienne Bell
Crewel by Albin, Gennifer
Billionaire on Her Doorstep by Ally Blake
Her Only Hero by Marta Perry
Fate Of The Minotaur (Her Dragon's Bane 5) by Harmony Raines
The Volcano Lover by Susan Sontag
Can I See Your I. D.? by Chris Barton
Seeking Love in Salvation by Dixie Lynn Dwyer
Alien Invasion (Book 1): Invasion by Platt, Sean, Truant, Johnny B.
Play With Me by Alisha Rai