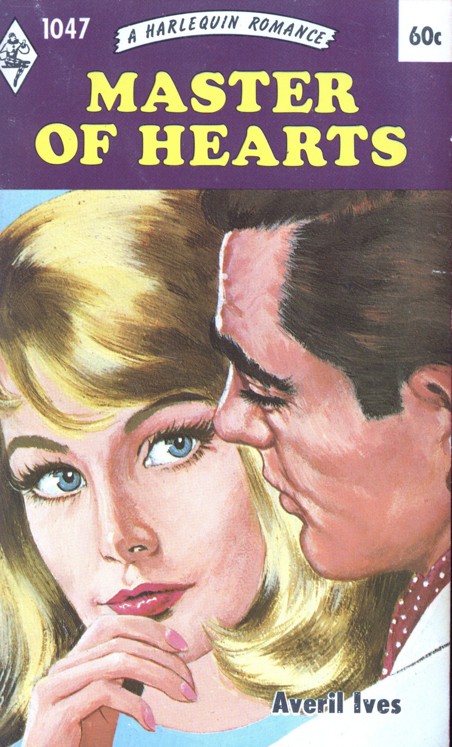 Master of Hearts by Averil Ives

When blue-eyed Kathleen O'Farrel became governess to the two small
nephews of the Conde de Chaves
it was all fixed up in such a hurry that she had very little time to reflect on what she was doing. The handsome Conde had strict ideas on how young women should behave, and although Kathleen's fearless approach to most things intrigued him there was a consequent clash of wills.
But Portugal cast its spell on Kathleen. She was to know a good deal of heartbreak and to change her ideas about many things before final happiness was hers.

OTHER Harlequin Romances by AVERIL IVES

Many of these titles are available at your local bookseller, or through the Harlequin Reader Service.

For a free catalogue listing all available Harlequin Romances, send your name and address to:

All the characters in this book have no existence outside the imagination of the Author, and have no relation whatsoever to anyone bearing the same name or names. They are not even distantly inspired by any individual known or unknown to the Author, and all the incidents are pure invention.

The Harlequin trade mark, consisting of the word HARLEQUIN and the portrayal of a Harlequin, is registered in the United States Patent Office and in the Canada Trade Marks Office.

KATHLEEN emptied her drawers and folded away nylon underthings in the suit-case that lay open on the bed with the thought at the back of her mind that it was a sad thing doing anything at all for the last time.

And the conclusion of a holiday is sad enough in any case.

Only a fortnight ago she had been happily emptying the suit-case and thinking what an enchanting little bedroom it was she was going to occupy for fourteen glorious days. Glorious, sun-filled days that had lived up to every one of her expectations, because this was sunny Portugal, the month was July, and her hosts were her brother and sister-in-law, who were the nicest people in the world. Quite the nicest people in the world she thought, with a sigh, as she took a last look into the wardrobe to make certain it was bereft of all her light summer linens and cottons, and then walked to the window and threw it wide.

What colour and romance and charm was to be found on this brilliant coast. The sky was as blue as a mountain harebell, and the sea lapped murmurously on the white beach. There was a translucent look about the water, as if it was made of glass, and she knew that when you swam in it it was light and buoyant and warm as oiled silk.

The coast was deeply indented, and that made her think of far away Cornwall, where she had spent many happy holidays when she was a child. Her father, like her brother, had been an artist, and they had rented funny little furnished cottages that had clung dizzily to the edge of cliffs, and become towers of strength on wild and stormy nights. Here in Amara she had not had to live through any wild and stormy nights, but the sensation of light and space and carefree living was the same.

She turned her eyes to the flower-filled gardens inland, the jewel-bright fields, and the countless other white and

colour-washed villas that were dotted like birthday-cakes along the curving shore line, and she knew that the one thing Cornwall had lacked had been this glorious colour. It almost hurt the eyes, was like a violent assault upon the eye-balls, and the deep green of the umbrella pines and the rather dusty palms was something of a relief.

Yes; Amara had colour and charm and romance. But if she had come here looking for real romance —hoping for it secretly at the bottom of her heart —she had been disappointed. For the only romance had been in the flaming dawns and the crystal-clear sunsets; the high-prowed fishing-boats putting out to sea, and the charming young varinas who flashed their black eyes at the sturdy young fishermen, and had the grace of ballerinas as a result of balancing huge baskets of fish on their heads.

The door behind her burst inwards, and Peggy, her sister-in-law, came in with a quick tapping of her cork-soled sandals.

"Darling, the most extraordinary thing has happened!" she exclaimed. She looked so excited that Kathleen regarded her with interest; the more so because instead of taking her basket of market-produce through to the kitchen Peggy had just dumped it on the bed. "It's really amazing how things work out sometimes, and I still can't believe that we may after all be able to keep you here!"

"Keep me here?" Kathleen gazed at her for an explanation. "But—but, what do you mean?"

Peggy fumbled in the pockets of her slacks for the soft paper package of cigarettes that usually reposed in one or other of them, and selected and lighted one before satisfying the other's curiosity. The deliberate movements of her slim, tanned fingers Kathleen found almost maddeningly exasperating just then.

"Darling, you did say you would like to stay in Portugal if it was humanly possible, didn't you?"

"And you're not really serious about that job that was offered you in the Home Counties? Or was it the West Country? It sounded terribly dull, so I didn't take

much notice when you were telling me all about it . . ." "You mean the one with the backward girl? Coaching her?"

"Something like that. Poor child, I'm sorry for her if she's backward, but what sort of a life would you have shut up with her in a schoolroom? And as soon as she'd picked up a bit and was ready for school you'd be sent packing! Whereas, with the de Chaves children you might be able to settle down for a year or two."

"The Conde's nephews. You haven't met him because we don't normally mix in the exalted circles he moves in, and the atmosphere surrounding the people he knows is a little rarefied. We're just part of the English Colony here, and worse than that we're Bohemian . . . Artists, you know! And even in England folk who live by their brush are sometimes looked at a little askance."

She sounded a little breathless, and Kathleen pulled her down on the end of the bed, alongside the suit-case and the shopping basket. The two girls were much of a height and much of a build — slim and lithe and lissom —but Peggy was obviously several years older than her husband's young sister. And Kathleen was as golden-headed as an English daffodil, while Peggy O'Farrel was sleek and dark and
soignée
.

"Please go on," Kathleen begged. "I know you're rushing to get through it, but can't you leave the English Colony out of it? Don't forget that Daddy painted, and I know the looks you mean! But apart from breathing a rarefield atmosphere are you trying to tell me that the Conde has a job to offer me?"

Peggy nodded in a pleased fashion.

"How bright of you, darling! And you will accept if he really does offer it to you, won't you? At the moment I've let it be known that you're terribly sought-after and rushing back to England to take up an appointment under pressure, but you'd much rather remain in the warmth and sunshine out here. The Conde's two nephews are American—or, rather, their father was American—and his sister being left a widow so suddenly she's absolutely

at her wit's end to know what to do with the children. Full of Americanisms, you know, and shouting Americanese at the tops of their voices . . ."

"Please," Kathleen begged again, "begin at the beginning if you will, Peg!"

"Very well!" Peggy smiled at her, took a long pull at her cigarette—incidentally, American, also—and obeyed. "I met Mrs. Branston-Jones this morning — she's the wife of the manager of the travel-bureau. She had just been talking to Senhora Elvas, who is the sister of the housekeeper at the Quinta Cereus, which is the Oxide's summer residence — or one of his summer residences, because he's an extremely wealthy man and has houses all over the place. Apparently his sister is now staying with him at the quinta because, as I said, she's recently been widowed, and her two small boys are utterly unmanageable and turning the place into a circus. With all Portuguese families there is a tremendous strong family tie, and the Conde wouldn't dream of turning her adrift, or asking her to put herself up at an hotel, or something of the sort. So an appeal has gone forth for someone to take charge of the children . . . Give them a spot of discipline which the Portuguese nursemaid who is looking after them at the moment is obviously quite incapable of giving them. And, naturally, I thought of you!"

"You — you actually said I might suit?" But for the first time Kathleen sounded doubtful.

"I said I was quite sure you would suit, if only you could be persuaded to renounce your wonderful prospects in England!"

Peggy's nut-brown eyes twinkled. "Darling, it's only a matter of dealing out a few spanks occasionally —probably very frequently until you've got the matter in hand! — and being terribly strict for the first few weeks, at least. You know how appallingly spoilt American children usually are, but underneath they're like all other children, and we all know what a way you have with other people's young! It's one reason why I maintain so strongly that you were simply cut out to be married . ."

But Kathleen headed her off by shaking her head at her, although her eyes smiled.

"Having a 'way' with children doesn't mean I can control unmanageable ones! Especially boys!" she pointed out.

"Being the Conde's nephews, and therefore half Portuguese, I'll guarantee they won't be unmanageable for long — he'll see to that!"

"Then why doesn't he start working on them now?"

"Because, my dear, he's a bachelor with many other more interesting things to do," Peggy explained. "And he's also Head of the House of Chaves, and it would be below his dignity. I've no doubt he's suffering acutely at the moment, with youngsters rampaging all over the place, but if he employs you, and you're capable, he'll give you his support, provided you do your stuff! But you'll simply have to do your stuff!"

"Then I don't think I'll even consider doing it," Kathleen said, and reached for her suit-case. "It's sweet of you, Peg to want me to stay, but I think I'd better catch that train. And first of all there's a 'bus to catch . ."

"Shane is going to drive you in." Peggy caught at her arm, and spoke appealingly. "Kathie, I told Mrs. Branston-Jones that she could tell Senhora Elvas to mention you to the Conde. And, worse than that, I've already telephoned the quintal . . . And spoken to the Conde! He's expecting you about eleven o'clock!"

"But I don't even speak a word of Portuguese!"

There was a harsh grinding of brakes and a groaning of tyres that should have been replaced many moons before, and Kathleen saw her brother climbing out of his vintage car in front of the house. He looked bronzed and handsome and lovable, in spite of his little curly golden beard, and she wished she hadn't to leave him. Her heart swelled with sudden love for him, and the forlornness of going away. All those many miles away . . . back to England, and a jobless condition! Because her last position had come to an end just before she left