Read Master of the Moors Online

Master of the Moors 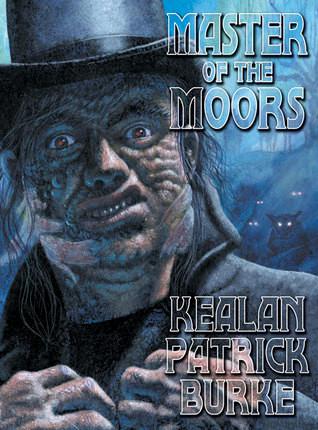 Master of the Moors

This ebook is licensed for your
personal enjoyment only. This ebook may not be re-sold or given
away to other people. If you would like to share this book with
another person, please purchase an additional copy for each
recipient. If you're reading this book and did not purchase it, or
it was not purchased for your use only, then please return to
Smashwords.com and purchase your own copy. Thank you for respecting
the hard work of the authors.

Other Titles by Kealan
Patrick Burke

For the
readers
, without whom I'd be lost
in the fog.

The cold glaring eye of the moon
peers at her over a pillow of fog. Arms crossed over her breasts,
eyes swollen from crying, the woman stumbles blindly across the
moors, her clothes torn, hair in disarray, streaks of shadow like
dark fingers on her cheek. The air thickens as if it has gained the
weight of her misery. Around her, half-glimpsed ghosts rise with
imploring arms from the fog, shifting and stretching, then are just
as quickly consumed. She stumbles on across the uneven landscape,
once her haven, now the canvas upon which her fear is painted in
pale strokes. Sphagnum moss breathes its cloying scent at her;
unseen creatures flee at her uncertain approach, and the ground
shifts from cushioning loam to unyielding stone.

Then a sound, a footfall, and she
whirls, the fog rushing away from her in cyclonic waves. Eyes wide,
she struggles to discern the slightest sign of life from this
maddening colorless void between earth and moon. "Hello?" Her
whisper dies before it crosses her lips. There is someone there.
She sees nothing and has yet never been so sure of anything in her
life. Amid the roiling clouds of fog, someone is approaching.

Without direction, every step is
treacherous, for there are mires and bogs strewn across these
fields, but in the absence of visibility she allows her other
senses to guide her, trusting in them as she has trusted them all
her life, relying on instinct to spirit her away from harm. Head
down, and despite the best efforts of her skirts to send her
sprawling, she quickens her pace. Ahead, there is nothing but a
wall of shimmering white.

A bird cries out; it is the sound
of a scream.

She stops. Face
upraised to the blanketed moon she closes her eyes and draws in a
breath. Sudden pain carves fiery lines across her stomach.
There is so much left to do,
she thinks
,
it cannot end now
.
They will need to know what they are.
A moment passes, marked by a sound that might
have been her pulse thudding against her skull, or the protests of
the child in her womb. She puts her hands to her belly, and
whispers. "They'll need you. They'll need their savior."

She is cold. The moon peers like
a frightened child around the edge of a cloud.

Serpentine shadows sprawl at her
feet.

When at last she opens her eyes,
there is a man standing before her, smiling, a shard of moonlight
gleaming in his hand.

Grady awoke from dreams of
thunder to a pounding on the door. For a moment he lay still in his
bed, the sheets clutched tight to his chest against the early
morning chill, and waited for the impatient knocking to reveal
itself as nothing but lingering echoes from sleep's theater. But
when the window above his bed shuddered in its frame as fist met
wood again, he sat up, blinking, and slowly got out of bed. As he
dressed, he heard the floorboards creak in the room above his own.
The cacophony had roused Mrs. Fletcher and it would make a devil of
her for the rest of the day. With a sigh, he shrugged on his
dressing gown and made his way out into the hall. The brusque
persistence of the man at the door filled the hallway with muffled
gunshots, inspiring Grady to quicken his pace, despite the
protestations of joints unaccustomed to such urgency.

"All right, I'm on me way,"
he complained, flapping a hand in the direction of the door, as if
the displaced air might carry his words to the visitor.

Mrs. Fletcher's voice
startled him. "Heaven save us, Grady, the bloody sun isn't even up.
Whoever's there, I hope you intend to give them what-for for wakin'
the house."

Grady looked over his shoulder at the
large scowling woman standing at the head of the stairs. The
reddish cast of her face emphasized the few strands of silvery hair
that had escaped the confines of her crumpled nightcap.

"That I will," he murmured
and opened the front door.

A slender figure all but
fell in on top of the old man, who backed away as if someone had
thrown something unpleasant over him. Startled, he aided the
gentleman in righting himself, realizing as he did so that the man
was none other than Edgar Callow, yeoman and master of the hunt
club.

The huntmaster's face was
only a shade darker than the morning fog. He composed himself,
brushing some imaginary dirt from his greatcoat. "Is your master
here?"

Callow opened his mouth and
closed it again, then braced himself against the doorframe. "It's
my wife," he said softly. "Sylvia...She didn't come home last
night."

Though he had little love
for Callow, who on any other day would have treated him in a manner
usually reserved for vermin, Grady felt a pang of pity for the man.
He had only recently married, and whether fate or betrayal had
spirited his wife away, it was obvious he already feared the worst.
With a sharp nod of assent, Grady moved out of the doorway. "You'll
come in out of the cold?"

"There's no
time
," Callow protested.
"I have men waiting at the Fox & Mare, horses at the ready.
We'll need them all in this horrid weather, but your employer knows
the moors better than any of us and I'd consider him an
invaluable
asset.
Please...rouse him, won't you?"

Grady turned and met Mrs.
Fletcher's expectant gaze. There was no need for words. She sighed
heavily and went to wake Mr. Mansfield.

The fog was a living
thing, creeping across the moors like an animal in search of food,
until its hide made twins of earth and sky. From within the low
clouds came the sound of clopping as hooves met stony ground, then
stopped. Then all was quiet, but for the occasional shrill cry of a
lapwing.

There were six of them in
the party, including Callow, who surveyed the terrain as if he
could see through the fog. Behind him rode Peter Laws, owner of The
Fox & Mare, and whipper-in for the Sunday foxhunts, and Greg
Fowler, the local shopkeeper. Alistair Royle, coal merchant and
inveterate gambler, followed at a pace that reflected his sluggish
mood, with Mansfield and Grady bringing up the rear.

"He's mad if he thinks
we'll find her in this," Royle muttered, his face still red from
the strain of leading his intemperate mare up the slope to the
rocky tor---a misshapen spire of weathered granite bearded by fog.
The heavyset old man had been hungover and still half-asleep when
Callow had roused him, a condition reflected by his shabby state of
dress. His breeches were stained, his coat buttoned only at the
top, allowing his swollen gut to hang over his belt. "Would've been
far more practical to stay at home and send for a
constable."

Eyeing the red ribbon
cinched around the tail of Royle's horse---a warning to those in the
rear that the mare was known to kick---Mansfield rode up beside him
and leaned in close so they would not be overheard.

"If he hears you, you're
likely to get a thrashing."

Royle scoffed, spittle
flying from his piscine lips. "Oh, come now." He smiled slyly. "Are
any of us here surprised his little foreign lass has run
away?"

Royle's inability to keep
his thoughts to himself frequently got him in trouble, but on this
occasion at least, Mansfield had to concede that no, he was not
surprised it had come to this. Though all outward signs suggested a
gentleman, Callow was known throughout the village as a cruel man,
quick with his fists and undeterred by the sex of his chosen
targets. He had, on one drunken night at The Fox & Mare, even
confessed a certain respect for the so-called Whitechapel Murderer,
who he believed represented 'a force of purification in those
Stygian ghettos.' How he had managed to woo a striking and
intelligent woman like Sylvia Callow, who must surely have seen
through his charismatic facade as soon as she'd set eyes on him,
was a mystery to the villagers. But not to Mansfield, who had heard
from her own lips how Edgar had been little more than an escape for
her from the poverty of Calinesti, her village in Romania, where
Callow had spent a year fulfilling the stipulations of his
philanthropist father's will.

"Do you realize how much
medicinal whiskey I drank last night?"

Mansfield shook himself
out of his reverie and looked at Royle. "No, and I don't care to
know. Just listen to Callow and do what he says."

"Bah! I'll wager she's on
a train to Paddington right now. If she has any sense, that
is."

Mansfield sighed and moved his horse
along the line until he was level with Callow.

On a clear day, the
rolling, rugged moors were awe-inspiring, but today there was
nothing but a dense floating field of gray ahead of them. Here and
there more tors could be seen poking their craggy heads through
rents in the clouds, but it wouldn't be long before even those were
obliterated completely. Mansfield could feel the fog pressing
against his skin.

"What do you wish us to
do?" he asked Callow.

The huntmaster, eyes
glassy, didn't respond, and for a moment Mansfield wondered if he'd
heard the question at all. Then, without looking at him, Callow
said, "I loved her, you know."

Although it unsettled
Mansfield to hear the man refer to his wife in the past tense, he
nodded his understanding. "Of course. And I assure you, if she's
here, we'll find her."

"Why wouldn't she be
here?"

"Well you have to consider
the possibility that she..." He trailed off, unsure how best to
suggest that Sylvia might simply have left him.

For the first time since
he'd gathered the search party, Callow smiled. It was faint and not
at all pleasant. "She knows better than that."

Mansfield stared at him
for a moment, then at length said, "I'll go scout up
ahead."

Mansfield rode away,
finding himself in agreement with the boorish Royle now more than
ever. A search on a day like this was a preposterous idea, and yet
here they were trouping blind across an unpredictable landscape. He
was also bothered that Callow had recruited him for his
'navigational skills'. Mansfield had, like Laws and Fowler, grown
up by the moors, but such intimacy with the terrain did not
guarantee safe navigation, especially in the fog. Callow would have
known this. There were boulders, bogs, excavation pits and mires
scattered throughout, all of which could be lethal to man or mare
alike. Only total dark could be more forbidding, and dangerous.
Today, superior navigational skills were worthless, which begged
the question of why Callow had asked him, or any of them for that
matter, to accompany him at all.