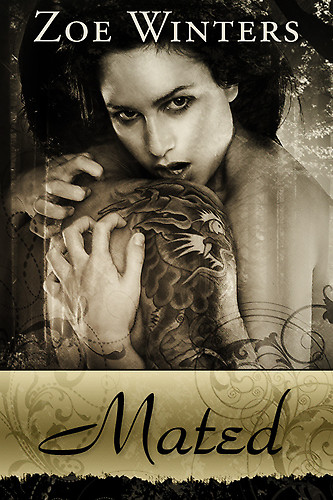 This ebook is licensed for your personal enjoyment only. This ebook may not be resold or given away to other people. If you would like to share this book with another person, please purchase an additional copy for each person you share it with. Thank you for respecting the hard work of this author.

This book is a work of fiction. Names, characters, places and incidents are products of the author’s imagination or are used fictitiously. Any resemblance to actual events, locales, or persons living or dead, is entirely coincidental.

Thank you to the following people:

Mary Higgins (aka WorldofHiglet): For the idea for Theriantype.com (I had the name, but the actual site wouldn’t exist without her.) And also for beta reading.

Lindsay Carruth: For brainstorming and help with fonts and cover design and for listening to all my layout whining.

Moriah Jovan: For helping with questions regarding formatting.

If I’ve left someone out, it was unintentional, please email me at:

[email protected] and I will correct the problem wherever possible.

Thanks also to all my supportive blog buddies. We all need a cheering section. You guys rock!

And to my husband, who likes my fiction even though he won’t fully admit he’s reading romance.

If Jane Tanner’s life could be summarized on a bumper sticker, it would say: “Be small. Don’t look threatening.” An odd life mantra for a 24-year-old woman who was five foot three, and one hundred and ten pounds soaking wet. But sensing vampires in a world where such beings were a well-kept secret wasn’t great for survival.

Jane huddled in her coat and scrunched behind Paul as he led her into the smoke-filled club. There was snow on the ground, but this wasn’t about the cold; it was about being invisible. Lately, the goal had been to be invisible from Paul. Over the past six months, he’d become what every vampire before Gregory had been with her. A monster.

To the average human, Paul would appear handsome, nonthreatening. His frame was slight, his height only five foot nine. But in that compact form, he held the strength of an immortal. And although he was still a fledgling by most vampiric standards, he was still about ten times stronger than Jane. A fact he reminded her of often.

While other humans saw a handsome face, hair that glinted gold as if touched by the sun, and perfect creamy skin, Jane could only see his good looks as a passing shadow. Instead, what she saw when she looked at Paul––and every other vampire––was coal-black skin that glistened like a snake, with shimmers of silver where the light hit it, and eyes that glowed like doorways into hell.

His fangs remained hidden inside his gums. When they were out they showed on his human visage, and vampires preferred to keep a low profile.

Which was why they hated her.

She could see them without being one of them. She’d begged countless times to be turned, but Gregory wouldn’t curse her, and the other vamps wouldn’t reward her.

Paul held her wrist in a punishing grip as he dragged her through the bar. The smoke of countless cigarettes was a thick haze that had her eyes watering. It had to be the control of all the preternaturals because Cary Town was the only place she’d been in a long time where you could still smoke in a bar.

The establishment was run down, but it was obvious it had been the spot in its heyday, maybe sixty years ago. Back then there had no doubt been live singers and performers of jazz and blues, instead of the canned music that was being piped out now through a cheap sound system.

Jane scanned the bar quickly, noting her surroundings. Paul seemed unwilling to protect her from others, so she had to stay aware. There were vampires, some demons, a few humans, and a wolf.

Demons were a hard sort to recognize. If they mingled in the human dimension, they looked like humans. But there was something other about them. They often incited that fearful gut instinct most people feel stupid for feeling, then ignore.

Demons also tended to stare quietly and made plenty of eye contact . . . something most humans didn’t do with strangers. The humans were easy to pick out because they were just plain clueless. Laughing, talking too loud, drinking too much, completely unaware of the danger around them.

Considering the desire of the preternaturals to remain secret, one would think a lot of humans would mean safety, but with so many vampires present who could easily perform memory wipes, that bet was off.

And finally, the wolf.

Jane was glad Paul was dragging her to the back room because the wolf scared her more than the others. There was no particular defining characteristic that made him obvious to her as a wolf. His eyes didn’t glow, and she couldn’t see fur, for which she was grateful. She knew him from his picture.

Cole Riley. The alpha of the local wolf pack. The strongest werewolf pack in North America, fifty-three members and living right here in Cary Town. No one could find their den. They seemed to move in and out of the city at will without the need to go through the border patrol, and no one knew exactly how they were doing it. Underground tunnels maybe?

The wolves were a law unto themselves, anarchists except within their own group. So far the other preternaturals couldn’t bring them to heel. Which made them dangerous. Anthony said Cole had been the alpha for twenty years. For a wolf to remain in power that long, well, nobody crossed him.

The back room was sectioned off by heavy burgundy drapes. The walls were a rich mahogany wood paneling, accented with posters of pin-up girls from the forties. While time had been kind to the walls, the carpet was threadbare and in desperate need of replacement.

Vampires filled the room, and the alcohol flowed freely. The last thing she wanted was for one of them to get it into their head to get her drunk or shoot her up with something just for kicks. But then she noticed the other humans, vampire groupies . . . or pets. They blurred together now. She let out a small sigh of relief that she wasn’t the only human amusement.

In the middle of the room sat a large table made of dark gleaming wood. A few vampires in biker jackets sat around it, already dealing cards. There were chaise lounges against the walls in the shadows away from the one light that shone over the table center. Several vamps lounged about, a few with humans draped over them in a way that veered toward NC-17.

“Take off your coat and stay awhile,” Paul said.

Jane jumped as his voice cut though her mental cataloging.

The other vampires looked up, interest in their eyes. None of them felt much older than Paul. Though that would only be of benefit if she had a useful superpower. All her powers, if they could be called that, were the kind that put her life in constant danger. She could see them; she could feel them; sometimes she got vampiric memories. She didn’t want to speculate what that was about. They couldn’t get inside her mind or thrall her. Vamps hated that.

Reluctantly, she removed the coat. It was one of those Eskimo-style coats, with the fur-fringed hood that a person could easily get lost in. Though not real fur. Under the coat she wore black leather pants, a black leather halter top that was cut high to show her stomach, and black boots. The cherry on the sundae was hot pink hair and a nose ring.

At first glance, this wasn’t a look that matched the
be invisible
mantra. But you had to know this crowd. Looking around the room, Jane saw the other humans were wearing black too, including black lipstick and eye makeup. A couple of them had light face make-up that made them look dead, and they each had a different rainbow color in their hair. One of the girls had blue hair, another green, and one had short, spiky crimson.

This was exactly what crayons would look like if they were produced by a group of goths.

Jane didn’t wear the white make-up; her skin was naturally pale. Living with vampires in the dark and on Vampire Central Time since she was sixteen pretty much guaranteed she’d look like one of them.

One of the vamps looked at her appreciatively with a raised eyebrow. It was ridiculous, but many of them preferred naturally pale women instead of the groupies that wore makeup. They claimed the make-up altered the flavor of the blood, but Jane thought it had more to do with feeding their egos, the thought that some human would willingly give up the sun just to be in their precious presence.

Then again, maybe he was looking at her neck.

She could still feel where Paul’s fangs had pierced her throat earlier in the evening. He’d sealed the wound so she wouldn’t bleed to death but hadn’t healed it fully, preferring to see her wearing his mark. He wouldn’t give her a true mark, a claim. He just wanted to piss on his territory a bit.

Paul finally took an empty seat at the table and patted his knee. Jane sat on his lap as he picked up his cards and placed his bet. “Front me some chips, Rayne?”

The vampire sitting across from them snorted. “Where’s
your
money? Thought you had an endless supply?”

Paul slammed his fist on the table. “Anthony’s gotten too big for his britches now that he’s king. He’s cut me off. Says he won’t pay any more of my debts and that he better not hear I’ve been stealing off humans. He’s not cleaning that mess either.” Paul said it in a snotty sing-song voice.

For about the millionth time, Jane wished she could get into his sleeping chamber to stake him at noon when his sleep would be deepest.

Anthony’s fledge or not, Jane couldn’t see how he would mind her getting rid of the wanker. All Paul did now was cause trouble, threaten her, and make the new administration look bad.

“So, why don’t you earn some money?” It was the eyebrow lifter. The one who’d given her
that look
. And now she could almost see the cogs turning in his creepy little brain.

Paul let out an exasperated sigh. “I’m not getting a job. I’m a vampire for Christ’s sake.”

The other vampire at the table hissed on hearing the C-word. Maybe a superstitious one.

The eyebrow-raiser pressed on. “I was thinking you could put your girl there to work. I know I’d give you a few chips for a taste . . . or a ride.”

Jane worked hard to keep her face blank. She’d survived it before; she could survive it again. There had been the brief reprieve with Gregory, and while Paul had been a right bastard, he hadn’t shared her with anyone. He hadn’t gone out of his way to protect her, but he hadn’t passed her around either.

“You know what she is, right? You can feel it?”

The other vampire nodded, “Kindred, but . . . not. She’s human, but she feels like vampire.”

Paul snorted. “She’s an insult, is what she is.”

“But she’s different. You have a commodity here. Something unique you could sell if you had a better business head on ya.”

Jane stared at the cards in Paul’s hand, avoiding looking at the vampire with the entrepreneurial ambitions. She wouldn’t cry. She wouldn’t scream. She wouldn’t give them anything that would make them want to come back and get more.