Tags: #An Erotica Tale of Force

Mated to the Vampire Clan (An Erotica Tale of Force) 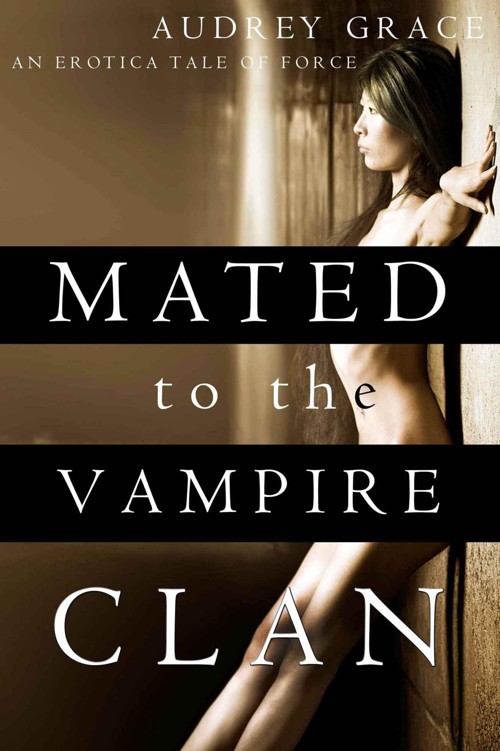 Mated to the Vampire Clan
An Erotica Tale of Force

Mated to the Vampire Clan

Mated to the Vampire Clan

“The middle of fucking nowhere,” she spat venomously, pacing up and down the driver’s side of her half-falling-apart daily driver. She looked up the road, her eyes searching the dark, serpentine route for any signs of tree-filtered light. But there were none, and there likely weren’t going to be for the rest of the night. She had locked up at the retreat. She had been the last one to leave. There was not much more beyond.

“Oh fuck, fuck, fuck,” she whispered, putting her hands to her head, feeling panic start to set in. She couldn’t possibly sleep in the car out here! It was gut-wrenchingly terrifying.

She took out her mobile phone. One bar. One solitary, lonely, neglected bar. She looked at the outlines of the greyed-out bars and cursed again. Barely any signal, all alone, and it was after eleven. “Great,” she said, roughly punching in her boyfriend’s number.

The number you have dialed cannot be reached at the moment. Please try again later.

“No, not now,” she pleaded into her phone, hitting redial.

Relief coursed through her veins.

“Hey, Danny? I’ve got a flat. I don’t know exactly where, but somewhere in the middle of Scenic Road. Yes, the winding one through the forest. Yes, you’ve driven me to work before. Jesus, Danny! What do you mean you can’t come pick me up? What? It’s in the shop? Today, of all days? Call the police? Well—”

“Fuck,” Maddi said. The single bar had dropped. Her lifeline had vanished. The darkness seemed to descend a little farther. The shadows seemed to dance a little closer. The chill seemed to pierce a little deeper.

And her boyfriend remained as utterly useless as ever.

“Okay, okay, think Maddi,” she said to herself, rubbing her hands together. “Sleep in the car? No, can’t do that. Walk along the road? Well let’s see. I’m about half way through. What do I usually pass? Trees, trees, more
fucking
trees! A house! Yes, there’s a house.” She opened the door and retrieved her bag and set off walking. “It’s probably got a murderer or monster or something living in it,” she said, instantly hating herself for thinking it. Using the dim light cast off her phone’s screen, she walked down the snaking road, barely wide enough for a single car. She estimated in her head that it would be at least another twenty minutes before she reached the house. She desperately hoped someone was home. Someone nice. Someone friendly.

Maddi’s walk began to quicken, graduating into a slow jog as the fingers of fear started to brush against her mind, tickle her imagination. She paced herself expertly, a veteran runner. Thankfully, her bag wasn’t particularly heavy, and her water bottle was only half full. She could hear the liquid sloshing around, and it helped her sustain a rhythm.

She made a conscious effort not to look into the trees on either side of the road as she jogged. That way terror lay, and she needed to keep her mind off those crippling thoughts. The flash of red eyes… a claw reaching out to grab her… some horrifyingly distorted and twisted caricature of a man…

“Shut up!” she said to herself, hitting her head with one of her palms. “Stop it!”

She tried to think of beaches and sunsets, of her favorite snacks and foods, but to no avail. All she could think about was that there might be something — or many things — lurking in the forest, hiding just beyond her range of vision, moving with her without making a sound.

Fine, she thought. If she was going to think about something in the forest, she may as well think of something good. A sexy man-creature perhaps. Wondrously sculpted, muscled shoulders, a large chest… he would jump out of the forest, arrestingly handsome, rough and rugged. He would take her right there and then, and she might fight back at first, but not for long. She would let him ravage her, envelope her in his animal fervor, propel her to staggering heights of pleasure.

“If only,” she said between breaths, thinking of Danny. Useless Danny. At least he had a big cock.

Too bad he didn’t have a big brain.

Fifteen minutes later Maddi came across the turn-off that lead to the house. The lone house on this forest road. The lone bar of reception. The lone woman stranded in the middle of the night.

A light sweat glistened on her skin, and as she slowed her jog down to walk, her mind once again returned to the sexy stranger whose dwelling place was the forest. It was the only thing she could think of that successfully drove away the terrors that threatened to wreak havoc with her mind.

She walked up the road slowly, painfully aware of how narrow it was getting. No car would fit up here. Soon, she thought, she might not even be able to keep going. The press of the looming trees seemed to suffocate, and the branches, like bony fingers, seemed poised to reach out and clutch at her.

“Stop it,” she said to herself, looking straight ahead and not daring to turn her head one way or another.

And definitely not behind her.

After a few interminable minutes, Maddi came across the solitary house. There was not a light on in any of the seven front facade windows she counted. “Big house,” she murmured to herself, trying to arrest the sinking feeling she felt within her at the prospect that there might be nobody here, no respite here.

She followed the snaking path to the door. It mimicked the forest road in miniature, curving this way and that.

She once again forced herself to think of the rugged and sexy man, the one who lived in the woods. His ass would be tight but generous, and his legs would be long and defined. She became aware, for the first time, that her panties were a little damp. All those sexy thoughts to drive away the demons.

“It really works,” she whispered to herself, before returning her gaze to the front door and wondering if she should knock. The house was obviously empty. Either that, or everyone was asleep and nobody bothered to clean or dust the place. Spider webs embroidered the outside intricately. Dead leaves lay decaying on the doorstep. The bronze of the door handle was tarnished.

She decided to venture a knock. She pounded her knuckles hard against the door, and it opened beneath the force, creaking loudly and, she thought, comically as it opened into what seemed an ancient and neglected hallway. The aroma of must, dust and mold assaulted her immediately, and she wrinkled her nose and recoiled a little.

“It’s better than the car,” she said to herself, not really believing it. “Hello?” she called out, hearing her own voice echo faintly down the hallway.

“Hello!” she called out again. This time the sound of her voice came bouncing back to reverberate within her bones. She shivered and held the backs of her arms, rubbing them. She wasn’t cold, but there was a chill here, something that felt abnormal. Supernatural, even. She stepped inside and walked down the long and dark hallway, the hairs on her neck saluting the dry and musty air. She took out her mobile phone and saw that here she had two bars of reception. Perhaps she’d give the emotionally impotent boyfriend another call.

She ended the call without saying goodbye. What a fucking prick, she thought. She could imagine him grinning into his phone as he had spoken of ghosts and poltergeists and witches and werewolves and vampires and monsters… what the fuck was wrong with him? Didn’t he
care
?

She spotted a sofa, large, a sheet draped over it like it was going out trick-or-treating. She slid the sheet off gingerly, aware of the centimeters of dust that had settled on top of it. Beneath was a large and grand sofa, maroon in color and, for the most part, clean. She sank into it, exhaling mightily as she did so, feeling her pulse slow and the exhaustion of stress wash over her.

She thought once again of the man-beast in the woods. The naked, muscle-bound man-beast. Slowly, her eyes grew heavier and heavier. She fought down yawns but to no avail. Despite her own protesting cognitions, she fell into a deep sleep, and entered a dreamland of turbulent and disturbing imagery.

Maddi was in the woods. The trees loomed over her menacingly. They were curled and gnarled and rotting. Their twitching, twig fingers reached out to ensnare her and she was caught in their grasp, unable to snap the spindly fingers that wrapped around her body. An eye opened in the bark of the tree that held her, and a large, white mouth parted.

It was going to eat her.

From nowhere, the man-beast appeared. He leapt twenty feet into the air, wielding an axe and a sword, and sliced through the trunk of the wicked tree. The scenery melted, and she was on a rolling hill. It undulated beneath her like the soft waves on the surface of a deep sea. He was holding her. She was in his arms. He bent down to kiss her. Their lips locked, a passionate embrace.

He was fucking her. Sliding in and out of her.

His face was changing.

He was becoming a monster.

Maddi screamed herself awake, her eyes springing open and her head on a swivel, turning violently from side to side. The room was so dark. She could not see anything. It was like a shroud of darkness had descended upon her, blinding her.

She looked toward the hallway. What was that? Something shadowy, something large, lurking in the darkness. “I said who’s there?!” she yelled, her voice shaking and the tendrils of terror and panic starting to creep into her consciousness. The shadow stepped forward, and as a soft light that seemed to originate from nowhere bathed him, she saw it was a man. A large, muscle-bound man. He was completely nude, and she looked him up his body. Powerful legs, thick thighs… a penis outlandishly large. Abdominals, pecs, wide shoulders, a strong jaw, a high nose… and dead eyes.

“How do you know my name?” she asked, two tears squeezing out from either eye.

“We know lots about you,” the man said, his voice imbued with a kind of cold curiosity.

“Us,” he said, hissing it. She saw a pale pink tongue slip out from beneath his lips to lick them, coating them in a glistening sheen. In the time it took for Maddi to blink once, he was upon her, one hand at her throat, the other grasping for her crotch beneath her skit. Maddi let out a howl of horror, but one look into the black eyes of the strange man before her silenced her instantly.

“Wh-what are you doing?” she asked, panic-stricken.

“We smelled you,” the man said, lowering his head down her body and sniffing at her like an animal. His mouth curled wickedly and from beneath his lips, two gloriously white fangs glinted, like jewels in his mouth. Maddi gasped, and all that she could think of was what her ridiculous boyfriend had said to her on the phone. Vampires. Monsters. Poltergeists.