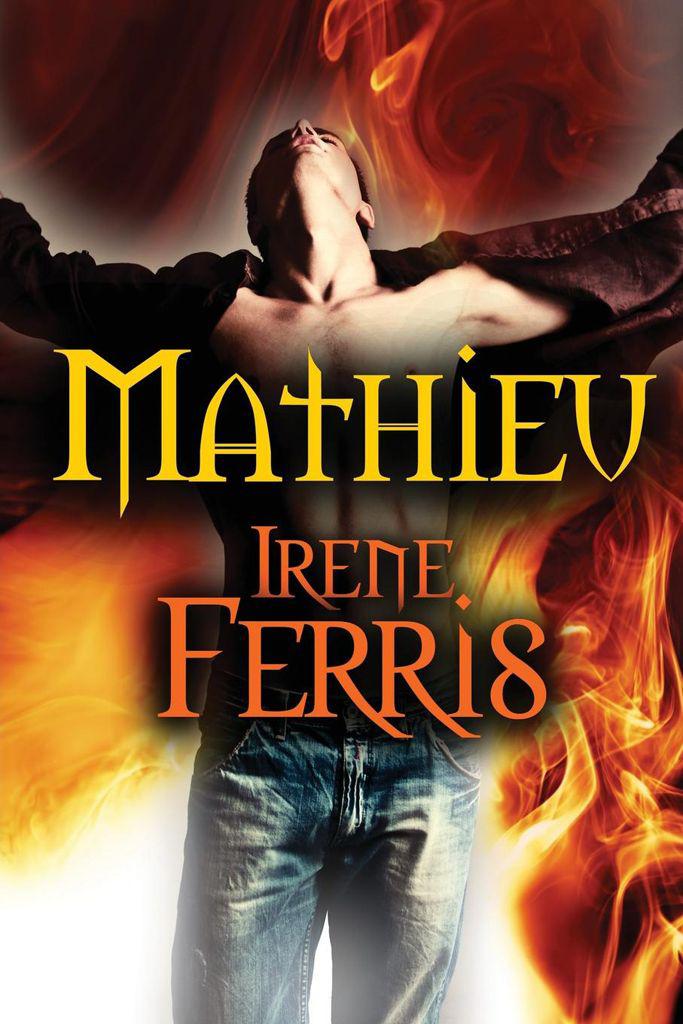 All rights reserved. No part of this publication may be reproduced, distributed, or transmitted in any form or by any means, without prior written permission.

To
all the Alphas: Without you, I would never have put pen to paper. Thank you for giving me a way to share my dreams. To Lane: Thank you for believing in me when I didn’t believe in myself. To Thom, who forced me to finish writing, and to Olivia, who helped him force me to finish writing: You both complete me. And to Maggan and Cherise, who have both kept me out of prison more times than I can count: Because of you, I didn’t finish this manuscript on toilet paper with a dull pencil after lights out.

It was the screaming that wrenched Mathieu back into the world, not the myriad of silver pellets slamming into his chest. The terror in that sound dragged what was left of his soul out of the dark, formless depths of his mind and threw him hard on his back on a cold, dirt floor.

He lay there and blinked in the unfamiliar light. He’d forgotten that there was anything except blackness.

He drew a deep, shuddering breath. The air, sulfur-tinged as it was, hurt all the way down. But this was a different kind of pain, a good kind. The chain of his servitude dug into his neck where the four rusty, iron links met. That was a more familiar pain and not good at all. He gasped again and then looked down at the shredded wreck of his chest.

The flesh was healing, knitting together as he watched. The pellets were pushed out, and they rolled onto the packed earth floor with a muted patter. The pain would have been unbearable to anyone who had not already endured what he had. As it was, it was beyond agony. Gadreel perverted even healing into torture.

Speak of the Devil—no, the Demon—Gadreel’s face appeared in Mathieu’s vision, its angelic beauty marred by that sharp, cruel smile that meant it was instigating some kind of blood-soaked mayhem. The sight was enough to fill Mathieu with overwhelming terror and hatred, and Gadreel’s grin grew even wider.

The Demon grabbed Mathieu’s hair, yanked him to his knees, and peered into his face. “Is that pain? It is. Wonderful.” It spoke to someone over its shoulder. “Excellent. You’re better at hurting him than I, and that’s saying something.”

Their
surroundings were a hellish scene. The room was a cellar of some sort—dark, dank, and filthy. The weight of an abandoned building pressed on them from above, and the place stank with a mixture of mold, urine, and dark magic. It was all lit with a lurid red light emanating from an Orbis Arcanus.

Gadreel dropped Mathieu back to the floor with a contemptuous fling and turned its attention to the woman who stood at the North cardinal of the Orbis. Mathieu frowned at that, as he climbed back to his knees. Women who cast were rare, but they usually cast from the South cardinal, the element of fire being essential for most summoning spells. The North—Earth—was used more as an anchor to stabilize the working, to keep things from going badly, and was normally held by a very strong male. Obviously something bad had happened here, because no healthy Orbis would ooze bloody light like this.

Mathieu watched Gadreel stalk forward to the North edge of the Orbis, to the young woman there. She was tall and almost gawky, her hair gleaming a bright copper, even through the obscene light. He watched as she stuck her chin out in defiance, even as the blood drained away from her face making her freckles stand out even more.

She spoke. “Name yourself. I command you in the names of Jopheil and Zaphkiel. Name yourself and be bound to me.” She was brave, Mathieu thought sadly. He knew all too well that courage alone would not defeat a creature like Gadreel. He would have been free centuries ago if that were the case.

“Bugger those two. They’re useless,” Gadreel replied brightly. “Besides, you’re hardly in the position to command anything.” It threw both hands up and with a wide, theatrical gesture, made a pushing motion. Mathieu felt the nauseating pull of power being taken from his body.

The Orbis flared and rippled and then expanded, jumping over the sigils carved in the dirt that had spawned it in the first place. There was
a
scream of pain from the East, and Gadreel chuckled as it made a grabbing motion, catching the power released from the suffering and shoving it back into Mathieu’s body. Mathieu retched.

The woman on the North was frantically gesturing and talking to a young man with golden skin and almond-shaped eyes. “This is Plan B? Plan B sucks!” She was gesturing at the brightly colored children’s toys he held. She still snatched one out of his hand and turned back to Gadreel. Her hands shook, but she frantically manipulated what looked to be a trigger of some sort.

Holy water streamed out from the thing and hit Gadreel. Mathieu watched the water run in rivulets down the blood-red chest plate, boiling off as it flowed. Gadreel’s armor was proof against all weapons, both mortal and hallowed. Mathieu had never seen anything able to penetrate it.

The Demon’s smile grew brighter and sharper, and Mathieu shuddered. There would be pain and fear and blood and death, and he had seen and heard and felt so much of that over the centuries. And then Gadreel turned its attention back to Mathieu to amuse itself. It had stopped trying for the fifth binding ages ago and had no need to even feign that it cared about the agony it inflicted. Mathieu closed his eyes and sought the blackness—the not seeing, the not knowing, the not feeling, the not being. Again. The blackness was the only refuge he could find.

The scream came again, and he winced. All of this was what had sent him inside before. Without thought, he began whispering, “
Pater noster qui in coelis est
.” He’d said the prayer times beyond counting since Gadreel had claimed him as slave and Familiar.

He couldn’t make out what the woman said, but he heard the Demon laugh and taunt her. “Of course humans can be bound, you stupid cow. We do it all the time. But I already have a pretty slave, and he suits me well enough.” There was a ripple of power in the room and Mathieu knew that the Orbis had been breached.

Now
there came a gurgling, choking sound from the woman. Mathieu continued his prayer, louder this time. “
Sanctificetur nomen tuum, Adveniat regnum tuum, Fiat voluntas tua et in terra sicut in coelo.
” He focused on each word and tried to remember the last time he’d believed that God was listening. Perhaps the poor soul Gadreel was despoiling would hear the prayer and be comforted, not knowing as Mathieu did that it was useless.

Gadreel was talking again, always talking. Mathieu hated everything about Gadreel, but above all he hated its voice. It talked just to hear itself. Mathieu’s body ached as he recalled the beating he’d received when he’d said as much to the creature after one particularly grandiose speech. “You’re the smart one. He’s the strong one,” it droned on. “The rest are just chaff, but taking your knowledge and his strength will make this unexpected excursion worthwhile and repay a small amount of the insult you’ve given by bringing me here. Killing you all in the most painful way possible is just a bonus.”

Scraping, shuffling, and then a sound unlike any Mathieu had ever heard in all the centuries he’d been enslaved—the Demon screamed in pain. He opened his eyes to see Gadreel backing away from the edge of the Orbis. The deceptively beautiful face was gone, and its true nature was now visible, debauched and hideous. It held its arm and snarled, “Do you have any idea what you’ve done, worms? Who you’ve dared to touch? What you’ve conjured?”

“No clue. Want to fill us in?” The answer came from a tall, muscular young man, who held a silver knife that was even now smoking and corroding from contact with Demonic blood. Mathieu realized that the man must have somehow managed to slip it through one of the small joints in the armor and pierce Gadreel’s flesh. The woman huddled behind, sobbing quietly and clutching her bruised throat.

The
creature paused, seemingly taken off balance by the question. The man stared fearlessly at the Demon. That was foolish, thought Mathieu. Gadreel was unstoppable. Or was it? It was obviously injured, maybe even weakened from the silver. A thought that he’d not dared to consider in hundreds of years came alive in Mathieu’s mind.

Gadreel remembered its anger and answered the man, “Not really. I’d rather just kill you now. Slowly and painfully.” It ran forward, breached the circle, and grabbed the man by the throat.

The Demon screeched in anger as it lost its grip on the man and fell to the packed earth floor. Mathieu looked at the man—still alive—and then to the woman. She stared back at him, wide-eyed with terror. That was when he knew why her scream had drawn him from hiding.

Their eyes met and memories of laughter and the thick scent of pear blossoms overwhelmed his senses. Her eyes had been blue then, her hair long and straight and her skin translucent, but the soul was the same, if a little older now. She looked away first and yelled, “He’s getting up!”

Mathieu had been expecting this, of course. He turned in time to see Gadreel’s fist slam into his face. Bones crunched and knitted together instantly. The floor came up to meet his face almost tenderly in comparison.

The kicks were next, each aimed to cause the greatest damage and pain. Ribs snapped and healed with equal amounts of agony. Gadreel’s cold iron boot stomped on his back, and Mathieu screamed, “
Sed libera nos a malo
.”