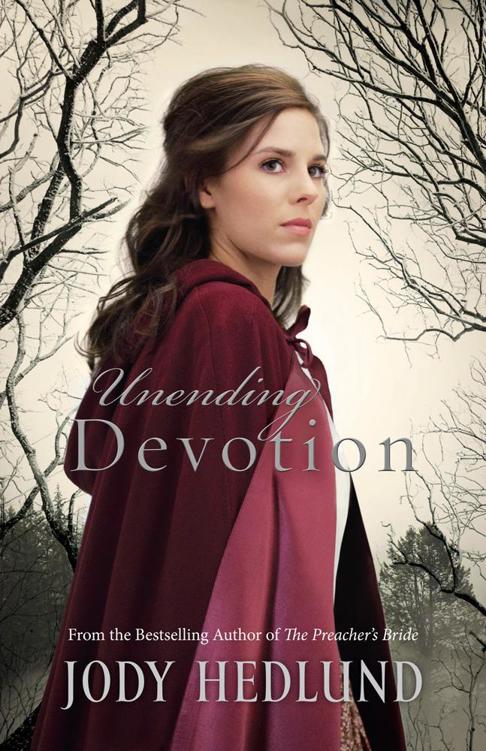 This is a work of historical reconstruction; the appearances of certain historical figures are therefore inevitable. All other characters, however, are products of the author’s imagination, and any resemblance to actual persons, living or dead, is coincidental.

For all of the many women who are helpless, hurting, and abused:

May you find a way out of the coldness of winter into the fresh spring of freedom and hope.

I
t was time. The drunk shanty boys were finally quiet.

Lily Young peered up through the shadows of the early morning darkness to the balcony that ran the length of the hotel. It was higher than she’d thought. Good thing she’d brought a rope.

She drummed her stiff fingers inside her mittens and lifted her gaze to the clear sky overhead. The last stars were fading. The lumber town would awaken with the first hints of light. And soon the woods would ring with the chopping and sawing of the shanty boys, who needed to make the most of each minute of daylight for their hard labor.

Which meant if her rescue was going to succeed, it was now or never.

But where was Edith?

Lily stepped away from the building and scanned the windows of the upper floor. Only yesterday, she’d looked the young girl in the eyes, watched the tears pool in their painful depths, and confirmed the escape plans.

Had the girl changed her mind so soon?

A window scraped open. Each halting inch up, the wooden frame rasped like a dying man gasping for breath. A bare foot poked through the opening followed by a slender bare leg.

Lily released a swoosh of air that made a white puff in front of her. “Good,” she whispered. Another life rescued from the pit of hell. Yes, it was only one. And it wasn’t her sister.

But it was a life that needed saving nonetheless. How could she stand back and do nothing—especially when her own sister was suffering the same fate somewhere?

The young girl climbed out the window. She took one step forward then stopped and wrapped her arms across her camisole. Dressed only in her undergarments, the girl shook like twigs in a winter gale.

The girl tiptoed to the edge of the balcony and leaned over, her eyes wide with fear.

She tossed the rope toward the girl.

With shaking hands Edith wrapped the cord around a post, all the while casting glances over her shoulder toward the open window.

The girl managed to hoist herself over the banister. With faltering movements, she snaked down the rope until Lily’s outstretched arms reached her and supported her the rest of the way.

When the girl’s feet finally touched the hard-packed snow, Lily grabbed the coarse sack she’d left in the snowdrift and dug through it for the items she’d brought for Edith. “Quick. Put these on.” She handed Edith her only rubbers and then draped a blanket around the girl’s shoulders.

“Curse the men who think women are no better than cattle,” Lily muttered. The tavern owner had confiscated his girls’ coats and shoes to keep them from running away. Of course, not all the prostitutes wanted to leave their life of degradation. But the minute she’d seen Edith, she’d known the girl was miserable, as miserable as her sister would be by now.

Lily slipped an arm around Edith. If only she could find Daisy . . .

During the past few weeks of living in Farwell’s only temperance hotel, Lily had done the best she could to search for her sister among the dregs. And after questioning some of the prostitutes, like Edith, she was confident Daisy hadn’t been in Farwell.

None of the shanty boys she’d talked to had seen anyone who fit the description of her sister. And she’d jabbered with plenty of the boys over the past month while helping photograph the lumber camps in the area.

The squeak of cutter blades on the icy road and the jangle of horse harnesses sent Lily’s heart slipping downhill. Silently, she stepped to the side of the building and pulled Edith next to her. She put her mittened hand to her lips in warning.

“If Big Joe finds me, he’ll beat me.” The girl’s voice wobbled.

“Stay right by my side,” Lily whispered. “I won’t let anything happen to you.”

The cutter inched down the wide main street of the sleeping lumber town. In the predawn light, Lily could make out the hunched back of the driver. She released a breath and squeezed Edith. “Everything’s all right. It’s Oren.”

Lily moved away from the hotel and waved at the oncoming cutter.

It slid to a stop, rattling the camera equipment that was piled high on the supply sled tied to the rear. Beneath a black derby hat, Oren’s bushy eyebrows narrowed to a dark V. He shook his head and muttered, “What in the hairy hound do you think you’re doing?”

“Edith needs a ride out of town,” Lily said. “And since we’re leaving, I figured we could give her a hand.”

“Girl, you’re going to be the death of me one of these days.”

She was sure Oren was remembering the rescue from the previous month over near Averill that had resulted in a chase and several gunshots. “Well now”—she patted his arm—“if you stay quiet enough, we’ll be able to get out of town before anyone hears us.”

Oren grumbled again. Thankfully his walrus mustache muffled most of his words.

Lily helped Edith into the cutter and draped a thick buffalo robe across her. She brushed the girl’s tangled hair out of her face. The heavy locks were in need of a good washing and brushing.

“You’re going to be just fine now.” She gave the girl the same smile and reassurance she used to give her sister on the many dark and lonesome nights when it had been just the two of them, when she’d been the only one to comb the tangles from Daisy’s hair, hold her tight, and wipe the tears off her cheeks. She’d had to be both mother and father for as long as she could remember.

The ache in her heart squeezed painfully. Who was wiping Daisy’s tears now?

A gust of frigid air slipped under Lily’s collar and slithered down her back. She shivered and drew her coat tighter. But the cold tentacles of guilt gripped her insides and wouldn’t let go.

Lily climbed into the open sleigh and tucked the blanket under Edith’s quivering chin. She grazed the girl’s cheek. “It’s all over now.”

The girl nodded, but her focus darted to the open window of the hotel, where the edge of a tattered curtain blew through the opening like a crooked finger beckoning Edith to return.

“By the time the cookee blows the nooning horn,” Lily said softly, “you’ll be settled safe and warm in your new home.”

If only someone had rescued her and Daisy long ago . . . and if only she and Daisy could have had a real home . . . and a real family . . . then maybe Daisy wouldn’t have had to run away.

Lily ducked her head to hide the sudden pool of tears that the bitter January air had already turned cold.

The slam of a door somewhere down the street echoed in the hollowness of dawn, and she quickly wedged herself into the tight space left on the seat.

“We best be going.” She kept her gaze straight ahead.

Oren grunted. “Now that I’m packed in here like a dill pickle in a pill bottle, I won’t be needing this.” Before Lily could protest, he shoved aside his buffalo robe and tossed it toward her.

She caught the heavy fur, and a waft of sweet tobacco enveloped her. Of course Oren wasn’t smoking his corncob pipe at such an ungodly early hour of the morning, but once the sun rose above the tips of the white pines, the older man was rarely without it.

“You’ll be needing the blanket soon enough.” Lily pushed the robe back his way. Just because she’d covered Edith with hers didn’t mean she expected Oren to suffer.

Oren ignored her outstretched arm and picked up the reins. “I’ve got more blubber than a bear in hibernation.”

“This was my doing, and I’ll bear the responsibility.” She held her outstretched arm rigid.

He flicked the reins at his team and the cutter lurched forward. “If anyone’s going to need the warmth this morning, it’s you two bean poles. Especially now that I’ll have to go out of my way to drop your new friend off at Molly May’s.”

Lily sat back and tugged the robe across her lap. A smile tickled the corners of her lips. Even though he’d grumbled like usual, she’d known he would help. He always did.

Oren caught her gaze above Edith’s head. His eyes shone with admiration. And something else, gentler. He might never say the words, but Lily knew he understood her agony and would do anything in the world to help her.

“Thank you,” she mouthed.

“Oh, don’t thank me,” he muttered. “I’ll be making you work your hind end off at the next place to make up for this here delay.”

“I always work hard. And you know it. Besides, if it weren’t for me dragging those shanty boys over to the camera, you wouldn’t have half as many customers.”

This time her smile broke free. She might not have a real family, but she had a good friend. And she couldn’t forget to thank the Lord for that.

And she couldn’t forget to thank the Lord that he’d helped her save another poor young girl. If He’d made it His mission to save lost sinners while on earth, then certainly she could do no less with her life. Besides, if she could steal Edith away, then she couldn’t give up hope that someday, somehow, she’d find her sister too.

She’d rescue her or die trying.

Night of the Jaguar by Michael Gruber
Send Me a Sign by Tiffany Schmidt
No Hero by Jonathan Wood
Limitless (Journey Series) by Williams, C.A.
The Adventures of Sir Givret the Short by Gerald Morris
Old Ghosts: Gypsy Riders MC by Palomino, Honey
Devil and the Deep (The Ceruleans: Book 4) by Tayte, Megan
Shattered Rose by Gray, T L
Eating Crow by Jay Rayner
The Saint-Fiacre Affair by Georges Simenon; Translated by Shaun Whiteside