Read Meant for Me (A Second Chance standalone) Online

Meant for Me (A Second Chance standalone) 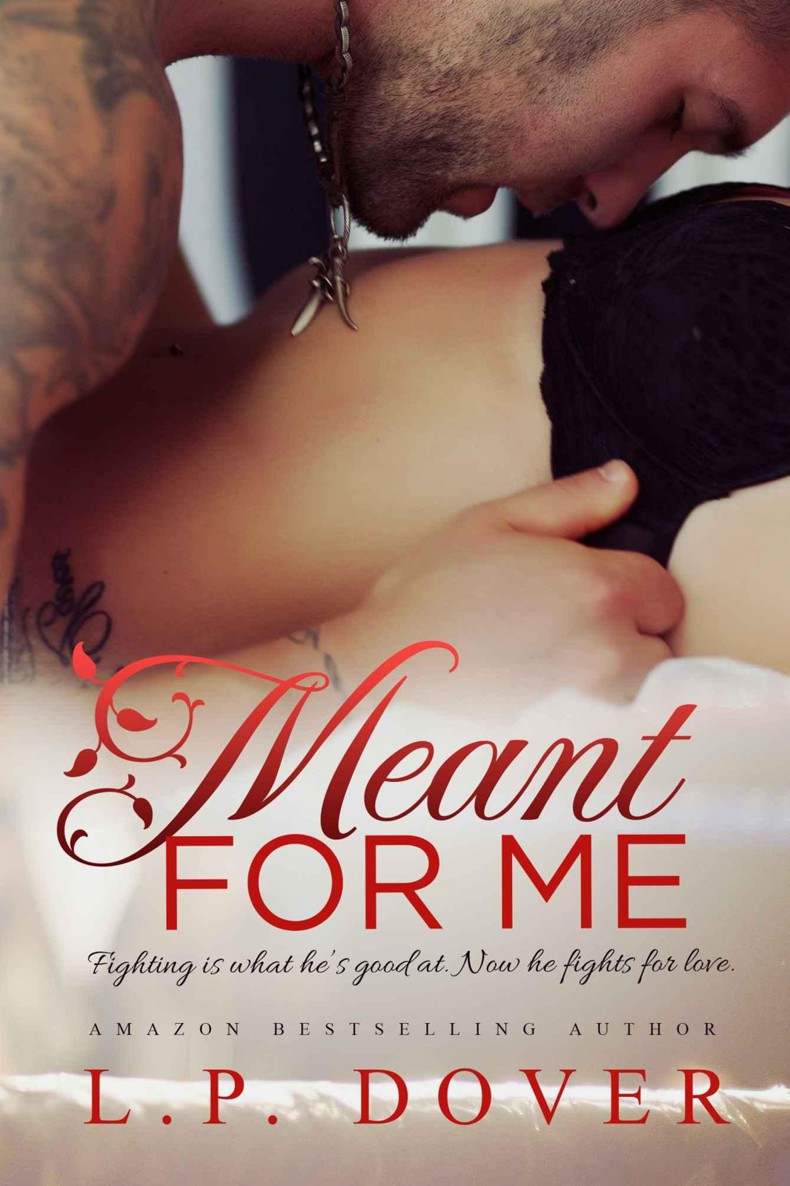 Without
limiting the rights under copyright reserved above, no part of this publication
may be reproduced, stored in or introduced into a retrieval system, or
transmitted, in any form, or by any means (electronic, mechanical,
photocopying, recording, or otherwise) without the prior written permission of
the author of this book.

This
is a work of fiction. Names, characters, places, brands, media, and incidents
are either the product of the author's imagination or are used fictitiously.
The author acknowledges the trademarked status and trademark owners of various
products referenced in this work of fiction, which have been used without
permission. The publication/use of these trademarks is not authorized,
associated with, or sponsored by the trademark owners.

Check Out These Other Extraordinary Authors

A Sneak Preview of
Pretty Little Dreams
by
Jennifer Miller

A Sneak Preview of
Skyler Towers
by Khelsey Jackson

A Sneak Preview of
First Glance
by L.L. Hunter

Second
chances aren’t easy to come by these days, but when you get them … cherish
them. One thing I’ve learned in my years of being in this world is to never be
afraid and to always fight for what you want. I know these aren’t exactly words
of wisdom, but this series, my SECOND CHANCES series, is special to me in so
many ways. I’m thankful and forever grateful to each and every one of you that
have stuck by me and have let my stories touch your heart. You all gave me my
second chance at a new beginning.

I
didn’t realize how empty my life had been until you slammed the door on my
heart. Right then and there I knew I screwed up whatever chance I had to get
you back, but I also knew something else … something I couldn’t deny any
longer.

You
were meant for me and I was meant for you. If it’s a fight you want, it’s a
fight you’re going to get. I will win you back.

The silence in the car was deafening. The beat of my heart
pounding in my ears was all I could focus on as Claire drove me to the airport
with tears streaming down her cheeks.

What the fuck had I done? I knew it was a mistake to let
things go as far as they did, even though we both promised none of it would mean
anything. It was a lie.

My flight back to North Carolina would be departing in three
hours, and it would put thousands of miles between us. My life was back in
North Carolina with my badge and my gun while hers was in California managing
her family’s vineyards. I didn’t belong there. We were completely different
people, but there was a spark in her eyes that drew me to her when I met her
through my cousin, Melissa, years ago. It was the same spark that ignited every
desire, every hope of being able to touch her just once. One time was all I
wanted, or at least that was what I thought.

The spark that I loved so much about Claire wasn’t in her
blue gaze as I peered over at her from the passenger’s seat. She was pissed at
me and I couldn’t blame her. Hell, if I was her I would’ve beaten the shit out
of me for doing what I did.

My cousin was the reason I was in California in the first
place, and if it wasn’t for her wedding I wouldn’t have stepped foot on this
side of the United States. Melissa used to live in North Carolina, too, but she
inherited part of the vineyards from Claire’s family when Claire’s mother died.
Brett was her fiancé at the time, and once he had everything squared away with
his job they both packed up and moved across the country. They had just gotten
married a couple of days ago and were already on their honeymoon in St. Croix …
hence, the reason why I had no one else to take me to the airport other than
Claire. I could’ve called a taxi, but Claire insisted on taking me.

I wanted to make things right, but there was nothing I could
say that would make up for what I did. I screwed up and let my dick take the
reins on my behavior. I couldn’t deny the chemistry Claire and I had,
especially the sexual tension, and every time she brushed up against me when we
danced my cock immediately sprung to attention. It wasn’t until later that
night—when I found her laying across my bed with nothing but a pink, lacy
babydoll that I could see straight through—that I finally gave in to my desire.

I wanted to taste her, to feel her … to finally get her out
of my system. What I got was an addiction, and what’s worse was that I craved
her even now.

We finally passed a sign for the airport indicating we only
had one more mile to go, and I knew I was running out of time. The tension hung
heavy in the air as I turned to the blonde haired knockout clenching the
steering wheel so tight her knuckles were turning white. She wore a bright pink
tank top with exceptionally short denim shorts that showed off her long, tanned
legs. She was beautiful.

“What do you want me to say, Claire?” I asked softly, hoping
to get something out of her instead of silence. “I told you I was sorry. What
can I do to make you talk to me?”

What I did to her was something I would regret for the rest
of my life. After a long, wild night of sex, love making, whatever you want to
call it, it finally came time to wind down. The look in her eyes when she told
me she was falling in love with me would forever stay ingrained in my mind. My
reaction would haunt me forever as well.

Being the asshole that I was, I told her I wasn’t good
enough for her, grabbed my pants off the floor, and left the room. I realized
my mistake as soon as I shut the door, but it was too late. The damage had been
done. Claire cried for what felt like hours, or maybe it was my misery that
made it seem longer. Meanwhile, all I did was sit there, leaning up against the
door and listening. I wasn’t prepared to hear those words come out of her
mouth, and I sure as hell wasn’t ready to face her this morning.

Holding her chin defiantly in the air, Claire kept her eyes
on the road. However, I couldn’t miss the undertone of hurt in her voice when
she said, “Look, Mason, I get it. You don’t do relationships. I was the one
stupid enough to think that after the night we shared things would be
different. I guess that’s what I get for thinking.”

I wanted things to be different between us, to be something
real, except I knew it wouldn’t work with the way we lived our lives. Sighing,
I tried to reason with her even though I knew it was hopeless, “We would never
see each other, Claire. I work long hours and the work that I do is dangerous.
You deserve so much better than me. Someone you wouldn’t have to worry about
all the time.”

She pulled up to the airport terminal and put her FJ Cruiser
into park before crossing her arms over her chest. Her breasts peeked up over
her tank top, and I could see on the mounds of her breasts where the stubble on
my chin had rubbed her skin raw. I wanted to kiss her again and tell her
everything would be all right, except the look in her eyes when she turned to
me let me know I had missed my chance. All I saw was anger … and pain.

Leaning over my seat, she reached for the handle on the door
and pressed it down, opening it wide. Closing my eyes, I breathed in her
scent—which always smelled like raspberries—as her body brushed up against
mine.

“You’re going to be late for your flight. It’s time for you
to go,” she snapped.

I reached for her chin to get her to look at me, but she
jerked away from my touch. Gritting my teeth, I released a heavy sigh. I slid
out of her car and fetched my bags from the trunk. Before I went inside the
airport, I leaned into the window of her car and let every ounce of regret I
had pour into my words when I apologized, “I really am sorry, Claire. I need
you to believe that.”

Pursing her lips, she nodded her head and met my gaze head
on, narrowing those gorgeous blue eyes in disdain. “Yeah, well … I’m sorry,
too. However, there is one thing you were right about in all of this.”

Knowing the final blow was coming, I had to ask, “What
exactly would that be?”

A tear escaped the corner of her eye and she hastily wiped
it away, ashamed at letting me see her pain. “It would be the part where you
said I deserved someone better than you. Before I would’ve said you were
completely wrong, but now … you were absolutely right. Good-bye, Mason.”

With those final words, she turned her face away and sped
off out of the terminal, never once slowing down or looking back. I had lost
her, and after today there was no way she would ever come back to me.

I was a fucking idiot.