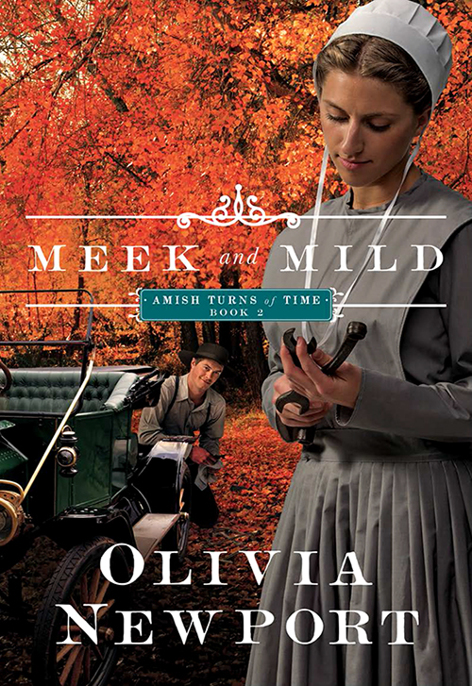 F
rom the first scratch of sound to settle in her daughter’s throat, Catherine Kuhn knew the coming squall would agitate a tempest in the entire row. Even as she tightened her grasp around the toddler and prepared to leave the worship service, Catherine looked across the aisle to catch her husband’s eye. Hiram, the reddish hue of his beard distinguishing him in the third row of married men, kept his eyes forward. Probably he would not know she took the child out until Catherine told him later.

Clara’s cry rose through her throat and burst across her lips. Catherine hastened her pace, easing herself outside the meetinghouse just before her daughter threw her head back and unfurled her distress into the unsympathetic empty air. Catherine carried the writhing girl farther from the confines of the worship service. This was no simple task. Catherine was eight months along. The energy required for moving quickly enough to contain the disturbance sapped her breath. When she reached the grass at the edge of the clearing where the meetinghouse stood, she let Clara slide down her skirt to the ground.

Clara was tired and probably hungry. When she was rested and fed, she was a delightful child full of curiosity and fluid smiles. When she was tired, though, she seemed to require a primal eruption of temper before surrendering to sleep. Catherine squelched envy of the mothers whose children slumbered during church, content in the arms of their mothers or older sisters, with their mellow baby noises exuding comfort to anyone seated close enough to hear. Catherine had expected her own baby would be like this. She took the infant to church when she was only a few weeks old, believing it was best for the child to become accustomed at the earliest possible age to the routine of three-hour services on alternate Sunday mornings. But Clara, with her feathery light brown hair in wispy curls, had not been the sort of baby to fall asleep oblivious to surroundings.

Catherine was grateful to be part of an Amish district that met in meetinghouses rather than homes, alternating between two meetinghouses, both in the southern end of Somerset County, Pennsylvania. Catherine and Hiram had married three years ago in the Flag Run Meetinghouse, Catherine’s favorite. It was silly to have a favorite, since the two were identical and two more just like them existed over the border in Maryland, but Catherine enjoyed this particular clearing around the unadorned frame structure.

The year after their wedding was when the trouble started. Bishop Witmer visited to help sort it out, but the results seemed dubious.

Clara settled in the grass, rubbing her cheek in its cool texture, and Catherine saw she had thwarted the tantrum. The child already had closed her eyes and slowed her breathing. Catherine’s back ached, but even if she managed to get herself down to the ground, she wasn’t sure she would be able to rise when the time came. About ten feet away was a fallen log of sufficient girth to keep her off the ground and give her a fighting chance to stand up again. The log had been there for years, and Catherine suspected it was going soft at the core, but it was her best option. Still catching her breath, Catherine lumbered to the log.

She didn’t mind being alone. On most days she savored a few minutes to hold herself still and notice the signs of life around her, the green of the grass, the flutter of tree leaves, the insects crawling along a wooded path, the birds inspecting the ground with their perpetual optimism of finding sustenance. On this day, though, Catherine had hoped against hope that she would be able to remain in church and hear whether the rumors were true. From this distance, she could not discern what was happening inside the meetinghouse.

Twenty minutes later, the women’s door opened, and the eldest Mrs. Stutzman emerged. She had five sons, all married with families of their own. Some of her grandsons had married as well, making “Mrs. Stutzman” an indefinite term. The youngest grandson, John, had only one year of schooling left before he would turn fourteen and join his father in the fields. Catherine had always thought he was the nicest of all the Stutzman children. Betty Stutzman now strode as purposefully as her age allowed toward the log where Catherine sat.

“Hello, Betty.” Catherine reflexively laid a hand on her belly, where the baby had wakened to wriggle.

“You should go inside.” Betty lowered herself beside Catherine and nudged her elbow.

A torrid burst fired up through Catherine’s gut. “What’s happening?” She glanced at Clara, who had thrown her arms above her head in her favorite sleeping position.

“Bishop Witmer should have stayed,” Betty said. “How could he have thought this was settled?”

“Tell me what’s going on.” Catherine’s gaze returned to the meetinghouse.

Catherine was not sure Betty could lift Clara but supposed she could at least take her by the hand.

She wished her sister, Martha, were there. But Martha and Atlee were at the hub of the trouble, although they held in their characters nothing resembling maliciousness, and the decisions now stirring controversy were made nearly twenty years ago.

“What happened?” Catherine said, frustrated. “Everything’s been fine for more than fifteen years. Why must we suddenly quarrel?”

Betty smoothed her skirt and interlaced her fingers in her lap. “It was peaceful at the time. When some members considered a few small changes, it was a simple thing to use the state line to indicate the preferences.”

“The ministers agreed, didn’t they?”

Betty nodded. “People were free to worship where they were comfortable. No one held a grudge. We were still one church, and have been all this time.”

Martha and Catherine were children when it happened, too young even to have memories of the event. They had grown to womanhood understanding that congregations meeting in Somerset County, Pennsylvania, held to the old ways, while those in Garrett County, Maryland, took a wider view. Still, the differences were small. Anyone looking in from the outside would not have perceived them.

“So why now?” Catherine said. “If the ministers have held their own opinions and yet served together all this time, why now?”

Catherine forced down the bulge in her throat. “It’s just a class for children and a few new hymns.”

Most of the members in Pennsylvania found the notion of Sunday school hideously of the world. The Amish had lived apart for centuries, so why should they now adopt a spiritual practice that began in Protestant churches? In Maryland, where Martha and Atlee decided to live after they married, church members saw no harm, and neither did Catherine.

“Go on in,” Betty said. “The outcome will not change my life. It’s different for you—and your little
boppli
.”

As quickly as she could, Catherine moved back toward the building and pulled the creaking door open. Inside, the congregation sat in stunned silence as Bishop Yoder spoke in the firm, full-throated manner the congregation had come to expect since he was ordained bishop earlier in the year.

“We will, of course, take a congregational vote,” Bishop Yoder said. “But I will remind you that Bishop Witmer is well acquainted with the events that have occurred in our district in the last two years. Some of you met him while he visited to advise us on how we should proceed. I have presented to you the substance of his counsel to me as your bishop. Let us not respond to the division we have already suffered with more factions. I plead with you now for a unanimous vote on this matter.”

What matter?
Catherine wished she could pull on Hiram’s arm to find out what was happening and what his thoughts were.

“Are we certain this is the counsel Bishop Witmer offers? Perhaps he does not realize the extent of our family relationships with the Marylanders.”

Martha
. Whatever had brought the conversation to this point, it was going to involve Martha. Heartburn spread across Catherine’s chest, and she did not think it was because of the baby.

Bishop Yoder straightened his shoulders. “Jesus said, ‘If any man will come after me, let him deny himself, and take up his cross, and follow me.”’

Deny
. Bishop Yoder was talking about shunning the Maryland families, Catherine realized.
Meidung
. He wanted her to shun her sister. To not see Martha. To not speak to Martha. For her children not to know their
aunti
. Catherine stared at the back of Hiram’s head, willing him to turn around and see her, but he didn’t.

Turn of the Moon (A Royal Shifters novel Book 1) by Dover, L.P.
Outlaw in India by Philip Roy
The Catch by Tom Bale
Star Time by Patricia Reilly Giff
Forged in Fire by J.A. Pitts
Temple of the Traveler: Book 01 - Doors to Eternity by Scott Rhine
A Second Chance at Eden by Peter F. Hamilton
Cash [Pyrate's Treasure 3] (Siren Publishing Classic) by Cooper McKenzie
His Passion (By His Command #4) by Ana W. Fawkes
Cowboy Take Me Away by Lorelei James