Melt With You: Fated, Book 4 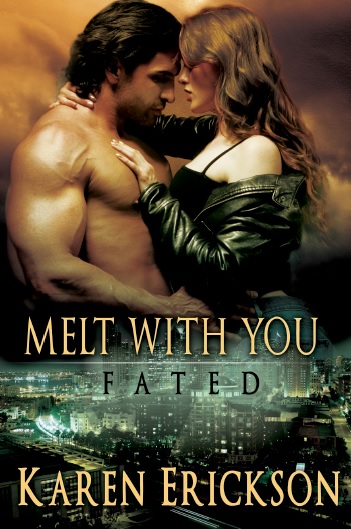 All rights reserved.
No part of this publication may be reproduced or transmitted in any
form
or by any means, electronic or mechanical, including
photocopy, recording, or any information storage and retrieval system, without
the prior written permission of the publisher, except in the case of brief
quotations for reviews. No part of this book may be scanned, uploaded or
distributed via the Internet, without the publisher's permission and is a
violation of International copyright law and subjects the violator to severe
fines and/or imprisonment.

This
ebook
is a work of fiction. The names, characters, places,
and incidents are products of the writer's imagination or have been used
fictitiously and are not to be construed as real. Any resemblance to persons,
living or dead, actual events, locale or organizations is entirely
coincidental. The publisher does not have any control over and does not assume
any responsibility for author or third-party Web sites or their content.

Published in the
United States of America

This
ebook
is licensed for your personal enjoyment only. This
ebook
may not be re-sold or given away to other people. If
you would like to share this
ebook
with another
person, please purchase an additional copy for each person you share it with.
If you're reading this
ebook
and did not purchase it,
or it was not purchased for your use only, then you should return to the
original vendor and purchase your own copy.

Thank you for
respecting the author's work.

“Whatever you do, don’t uncross your legs.”

The woman glared at him, the expression on
her reddened face fierce, her lips screwed up in a grimace just before she
spoke. “You have got to be kidding me. You’ve got a lot of nerve,
ya
know? Trying to tell me what to do during the most
painful moment of my—” She shrieked, her words lost as she clutched her belly.

Panic filled Wes, and he breathed deep.
Okay, maybe the humorous approach wasn’t the right way to handle a woman in
full-blown labor, but hell. He didn’t want to admit he was just as freaked as
she was. Yeah, he’d been a paramedic for six years and he’d assisted with a
couple of deliveries during his training days, but that had been a long time
ago and he’d only dealt with the occasional laboring woman.

He definitely hadn’t dealt with one this
far in labor—and she was pretty damn far.

Really damn far, as in dilated to nearly
ten centimeters and clutching his hand so hard he was afraid she’d squeeze his
fingers off. Sweat dampened her brow. Hell, it poured down her face, and she
let loose another wail just before she started that panting deal all laboring
women did.

She squeezed his hand again hard and acted
like she was going to…push.

He
smiled. He laughed. He cajoled and tried to get her mind off the matter at
hand.

She wouldn’t be deterred. She was a woman
on a mission to have a baby.

“First child?”
Making idle conversation was best. Her belly rippled. She gnashed her teeth,
and—
thank
Christ the ambulance pulled into the drive
that led to the emergency room drop off.

He could hand her off to labor and
delivery and all would be well.

“No, dumbass, it’s my third. My husband is
out of town with our other two children, visiting his parents.” She bit down on
her lower lip, gave a little whimper. “I’m three weeks early. I’m never early.
Every one of my babies has been late.”

“This one is just anxious I guess.” He
chuckled, and she glared.

Seeing her flushed face, her behavior
completely out of control reiterated a recent thought. No babies for him.
Ever.

“I’m pushing.” She made the announcement
just as the truck screeched to a jolting halt. “I don’t care what you say. I
can feel this baby hanging between my legs. I’m pushing.”

He winced. Not the image he wanted in his
mind but too late. Not that she cared, and not that he blamed her. “Ma’am,
please. We’re at the hospital. We’re here. We can take you up to labor and
delivery, and a doctor can guide you through the rest…”

“I
don’t need any
guidance,
I need to get this baby out
of me.
Now.
Oh my God.”
The
words rushed out of her and she levered herself up on her elbows, practically
bending in half. She started grunting, and he knew she was pushing.

That baby was probably going to tumble out
and over the stretcher in about two minutes if he didn’t do something about it.

“Shit.” She must have heard his mutter
because she started laughing, the crazy woman.

The doors swung open and his partner Evan
stood there, his eyes widening when he saw the scene before him.
“Holy crap, Wes.
Why didn’t you tell me she was this close?”

“She decided on her own she was this
close. Get someone and hurry up.” The words hissed out of Wes as he crouched
over the woman and made sure she was comfortable. “We’re going to move you out
of the ambulance.” She grabbed his hand, which she’d let escape only a moment
before, and squeezed it again. Damn, she was strong. “Don’t you dare take me
from this
ambulance.

The baby is coming.
Coming.
”

He looked about the interior of the
ambulance wildly, for what he wasn’t sure.

Yeah, he was in full on panic mode.
Hustling out of the back of the ambulance, Wes jumped to the ground, glancing
around for a sign of someone. Anyone who could come and help him assist this
poor, laboring woman who was about to deliver a baby into the world.

Evan
had disappeared, the emergency room doors sliding shut with a quiet
swoosh
, swallowing him whole. He better
be on the lookout and bring someone back pronto.

Wes didn’t want to do this alone.

The woman
screamed,
the sound ripping through the air. Wes turned and saw that her legs were spread.
She’d somehow torn off her underwear and, Lord
help
him, his gaze went unerringly to her crotch.

Saw the dark head peeking out between her
legs.

His skin went ice cold, and his head swam.
He felt dizzy.
Dizzy.

What the hell was wrong with him?

Gentle fingers touched his forearm and a
sweet-as-honey voice asked, “Do you need help?”

He glanced down, and the world seemed to
stop. All he saw was her—pretty and petite and with the smile of an angel, an
angel clad in pale blue scrubs.

Half tempted to bow before her and kiss
her feet, he nodded instead. “She’s about to give birth.”

“Haven’t you ever assisted a woman in
labor before?” Her voice was calm as she climbed into the back of the ambulance
and checked between the woman’s legs.
“Oh, dear.
He’s
coming right now, isn’t he?”

“How’d you know it’s a boy?” The woman
stopped her huffing and puffing and grunting and groaning to stare at the angel
nurse in awe.

“Oh,
I know these things.” His newfound angel gently pushed the hem of the woman’s
dress up to her hips and then rested her hands on the inside of the woman’s
knees. “I deliver babies all the time. I think with a couple of pushes, you’ll
have that boy in your arms, no problem.”

Relief flooded Wes and he leaned against
the edge of the truck, watching the nurse work with quiet, calm efficiency. It
was as if she’d fallen into his lap. A labor and delivery nurse—he couldn’t
have asked for anyone better.

“Okay, I don’t want you to push. I want
you to wait until you feel the next contraction, all right?” Her measured tone
calmed even him down. She turned, her pale blue gaze meeting his and it was as
if he’d been zapped by a bolt of lightning. “Do you have any gloves?”

“Of course.”
He
scrambled back into the ambulance and assisted her, giving her what she needed
as she asked for it. Watched with silent awe when she snapped on the gloves and
checked the baby, then skimmed her fingers over the woman’s massive belly.

“I can feel the contraction,” she murmured,
her fingers at the bottom slope of the woman’s protruding stomach. “Now push.
Work with the contraction, don’t fight it.” The woman closed her eyes and
pushed with all her might, no more grunting, hardly any sound coming from her
whatsoever. The complete calm that had come over the ambulance and everyone
inside it signaled an almost majestic event.

The baby spilled out and into the hands of
his angelic nurse. She cleaned the little red bundle’s mouth and nose, her
movements efficient and quick. The baby let forth a rusty squall, and she set
him on his mother’s chest.

The new mother touched the baby’s head
with wonder, tears springing into her eyes. “Thank you,” she whispered to the
nurse, her voice raw. The baby stopped squirming, and she cradled her newborn
son in her arms.

“You’re welcome.” The nurse smiled,
dimples appearing in each cheek, and Wes couldn’t help but feel moved by the
entire situation.

The nurse acted as if she witnessed
miracles like this for a living—which she did.

“You were amazing,” he murmured, not
wanting to disturb the mother as they started cleaning as best they could. He
wondered where the hell Evan had taken off to and where was the help that was
supposed to be arriving?

“Really, I’m just doing my job.” She
lifted her head, her gaze going to the back of the ambulance and there stood
Evan, a nurse on either side of him.

“No thanks to you.” Wes pointed to the
nurse.
“But plenty of thanks to her.”
She flashed him
a smile, and he felt it like a punch to the gut. He would certainly like to
thank her.

All That Man Is by David Szalay
Apocalypse by Nancy Springer
Trashland a Go-Go by Constance Ann Fitzgerald
Missing Reels by Farran S Nehme
The Steady Running of the Hour: A Novel by Go, Justin
The Story of Us by Dani Atkins
Bloody Times by James L. Swanson
The Case of the Graveyard Ghost by Michele Torrey
Russian Mobster's Secret by Bella Rose
Timetable of Death by Edward Marston