Men of Intrgue A Trilogy 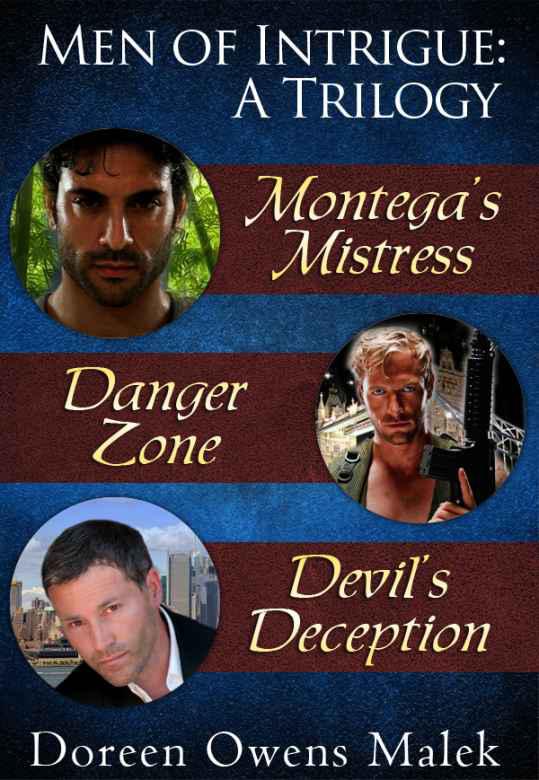 be identified as author of this work

All rights reserved. No part of this book, except in the case of brief quotations embodied in critical articles and reviews, may be reproduced or transmitted in any form or by any means, electronic or mechanical, including photocopy, recording, scanning or any information storage retrieval system, without explicit permission in writing from the author or publisher.

All characters in this book have no existence outside the imagination of the author and have no relation whatsoever to anyone bearing the same name or names. They are not even distantly inspired by any individual known or unknown to the author.

For my husband, Ken Malek,

Men of Intrigue: A Trilogy

Men of Intrigue: A Trilogy
is a three book anthology of my bestselling romances from the nineteen-eighties assembled in one volume. I have combined them because the stories share the common theme of adventurous heroes who get involved through fate and circumstances with ordinary (not!) women. All three heroines rise to the occasion when the men they love must follow through with their destinies despite the passion and commitment they’ve found with their partners. I absolutely
love
these books and had a great time with them. I hope you will enjoy reading them as much as I enjoyed writing them.

Montega’s Mistress
(1986) tells the story of a Central American revolutionary who discovers love with a sheltered American heiress when, badly injured, he stumbles into her family’s isolated resort home in Florida. Matteo Montega relies on Helen Demarest for his very survival as she nurses him back to health, but then must leave her to pursue overthrowing the corrupt government in his native country. How their lives reconnect and take them to the jungles of fictional Puerta Linda to share an unlikely but compelling passion is a timeless tale of devotion with an unexpected and delightful conclusion. Matteo and Helen are an irresistibly appealing couple, and you’ll root for them to overcome the odds and get together in the end. BTW love the title.

Danger Zone
(1987) has a tough, cavalier loner for a hero in Steve Colter, and the fun in this story is watching Karen Walsh worm her way gradually into his mercenary’s heart and break down his defenses. He tries hard to resist her and maintain his independent existence but the reader can tell from word one that he will eventually surrender. The story takes them around the globe but never far from each other’s thoughts, and when at the conclusion Colter transforms his life to keep Karen with him it is gratifying and fulfilling but not a surprise. The story also features a wise and witty best friend for Karen in Linda Folsom, a savvy Brit with a wicked sense of humor who keeps the saga humming along on the rare occasions when Colter is offstage. All in all it’s a fast moving and absorbing tale.

Devil’s Deception
(
1985) has a mafia princess for a heroine and an FBI Bureau chief for a hero, so the story gives new meaning to the notion of “opposites attract.” Brett Devlin is a fed planted in the home of Angela Patria in the guise of her bodyguard to get the goods on her drug smuggling uncle. When he finds himself instantly attracted to the lonely, withdrawn beauty who is Patria’s innocent niece, his life becomes complicated very quickly. It is Devlin’s job to be with Angela at all times since he is supposed to be protecting her, and this task makes it impossible for him to conceal his growing feelings for the woman he is deceiving on a daily basis. How this dilemma is resolved and the embattled couple wind up together makes for a satisfying read, and watching straight arrow Devlin unbend enough to fall for the gangster’s ward is touching as well as amusing.

be identified as author of this work

All rights reserved. No part of this book, except in the case of brief quotations embodied in critical articles and reviews, may be reproduced or transmitted in any form or by any means, electronic or mechanical, including photocopy, recording, scanning or any information storage retrieval system, without explicit permission in writing from the author or publisher.

All characters in this book have no existence outside the imagination of the author and have no relation whatsoever to anyone bearing the same name or names. They are not even distantly inspired by any individual known or unknown to the author. This is a work of fiction. The characters, incidents, and dialogue are products of the author’s imagination and are not to be construed as real. Any resemblance to actual events or persons, living or dead, is entirely coincidental.

“Matt!” Helen said, shocked. “You aren’t going to steal this!”

He met her gaze, deadpan. “No, Helen, I’m going to find the owner and tell him I’m taking it, so he can call the police.”

She looked around furtively. “What if the owner comes back?” she said.

“Well, maybe if we stand here debating about it long enough, he will,” Matteo said impatiently, pointing to the space behind him. “Get on. The idiot left the keys in the ignition. He deserves to walk.”

“Look, Miss Abe Lincoln, you just defrauded the Puerta Lindan government by entering the country under false pretenses and you’re on the lam with a wanted man. If I were you, I wouldn’t let a little thing like a stolen motorbike stand in my way.”

An opalescent moon hung over the Atlantic, dappling the shoreline and streaking the frothing waves with a silver path, as a wounded man stumbled up from the beach. Half crawling, trying to run, he was gasping for breath and glancing nervously over his shoulder at the flashing blue lights of the police cars gathering on the sand. Scrub grass and sea oats littered the slope, impeding his progress, and he staggered, almost falling several times. He clutched his injured arm with his other hand, the fingers slippery with his own blood. A small revolver dangled loosely from his forefinger and thumb, and he stuck it in the waistband of his pants so that he could wipe the sweat and seawater from his eyes. His vision thus cleared, he saw a light at the top of the embankment, and he headed for it, feeling a surge of hope. According to his information, this area of the beach was supposed to be deserted during the off season, the vacation homes empty, and he hoped to find refuge in one of them. He dropped to the ground suddenly as the beam of a searchlight passed over him and then he stood unsteadily, reaching for his gun again and scrambling for the ridge. He had to make it before he passed out; he had been shot before and could feel the remembered weakness flooding his limbs.

The light blurred and danced in the distance, coming closer by inches as he dragged himself toward it. When he drew near he saw that it was an arc lamp above a patio, probably left on for security reasons when the owners departed. He paused for a moment, surveying the landscape. The house stood alone, surrounded by artfully placed trees and bushes that provided privacy as well as a beautiful setting. Satisfied, he lurched onto the cement deck, supporting himself with one hand flat against the redwood siding of the house as he peered through sliding glass doors. They were covered by heavy woven drapes that effectively concealed the interior from view. He looked back at the beach, at the distant figures of uniformed men swimming dizzily before his eyes, and then down at his arm. In the dim light his sleeve seemed covered with a substance the color and consistency of spring mud. Making his decision, he lifted a folded tarpaulin from the railing behind him and wrapped it around a small deck chair. Gathering the last vestiges of his vanishing strength, he raised the chair above his head and crashed it into the right hand panel of the doors.

The glass cracked and he kicked it loose from its frame, taking care to do so quietly. When he had created an opening large enough to admit his body, he slipped through it. He slumped against the inner wall with relief, then shot bolt upright as a switch was thrown and the room filled with light.

A woman faced him—young, pretty, terrified. She was dressed in a floor length flowered nightgown, pale hair cascading over her shoulders, and it was obvious that she’d been reading at the dining table with a small study lamp whose glow was not visible outside. Her hand went to her throat as her blue eyes widened in alarm, and his heart sank. Oh, no. Not a woman. A man he could have knocked out, or tied up, but this was impossible…

Her eyes moved toward the telephone, and he stepped forward before she could act on her thought. She went white, staring at the gun in his hand. Her fright was palpable, flowing in waves across the distance separating them. He had to reassure her, fast, or panic might cause her to do something reckless.

“I’m not going to hurt you,” he said hoarsely, weaving on his feet as he spoke. “I’m not a criminal. Just do what I say, and everything will be all right.”

Helen Demarest looked back at him, trying to accept the reality of his alien presence in her father’s house. Her trancelike gaze moved over his form, registering that he was tall and slim, wet and very disheveled, with longish dark hair and tattered, filthy clothes. His features were handsome, or would have been under normal circumstances, without the sickly pallor that underlay his olive skin and made his brown eyes too large for his face. As she hesitated, unsure whether she should listen to him or run for the door, he shivered violently and several drops of blood sprayed from his fingertips, spattering the beige carpeting with carmine stains. Helen lifted her hand, as if to aid him, and he acted reflexively, raising his gun.