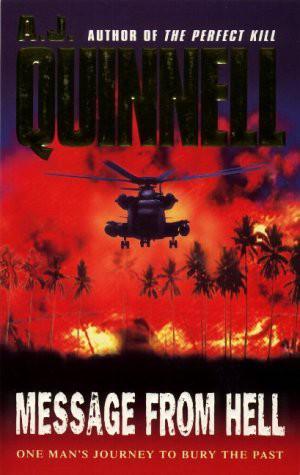 The man
was old, and the fingers of his right hand were thin and bony. More of a talon
than a hand. The metal glinted as it nestled in his palm.

The
talon closed around the metal as though protecting a precious jewel.

"Your
son is dead. I saw him gunned down."

"No,
it was a fire-fight. We'd been ambushed and were getting the hell out; but I
saw Jake get hit. He was cut down by machine-gun fire. He was about a hundred
metres away and there was no chance to get back to him. I got hit myself and
was lucky to get out."

"I
know. But did you see him actually die?"

"No,
Mr Bentsen. If anyone did, it was the guys who shot him."

They
were sitting at a corner table in a bar in Brussels. Creasy had dropped in to
have a drink with the bartender, who was an old friend. Before he had a chance
to take the first sip, the old man had appeared at his shoulder and asked to
speak to him. It was a bar much frequented by mercenaries, ex-mercenaries,
pretend mercenaries and would-be mercenaries.

The old
man had a stiff urgency. He had said: "Can I talk to you Mr Creasy;
privately?"

Creasy
had studied his face. He had a memory for faces, but this one stirred no
memory. There was something in the old man's eyes which made Creasy cross the
room and sit down at the table. The old man sat opposite, and said: "I'm
Jake Bentsen's father."

With
that he had reached into his pocket and pulled out the dogtag.

"How
did you find me?" Creasy asked.

The old
man sighed. "It was not easy. But my neighbour has a cousin who's an
analyst with the CIA at Langley. He did some research and told me that if you
were still operative you could be located via this bar. I've been here a week,
Mr Creasy, and I've been in this bar every day. Of course I asked the
bartender, but he told me nothing. I was going home to San Diego on
Monday."

"Well,
I'm not operative," Creasy said. "I happen to be in town visiting an
old friend. I'm leaving tomorrow. How did you recognise me?"

"From
the description in one of Jake's letters. He described every scar on your
face."

Creasy
looked at the old man thoughtfully, and then said: "Show me the dogtag, Mr
Bentsen."

Slowly
the fingers uncurled and turned, and the small metal disc dropped onto the
table. Creasy reached forward, pulled it towards him and looked at the name and
the number embossed on it. He looked at it for a long time, then took another
sip of his drink and asked: "Where did you get it, Mr Bentsen?"

"It
was delivered to me two weeks ago at my home in San Diego."

"I
don't know, Mr Creasy. At least I don't know his name or where he came from. My
doorbell rang. My wife answered it. There was a short man, an Oriental. He
handed her a small package and went away."

"And
this was in the package?"

"Was
there anything else?"

Again
the bony fingers reached into the jacket pocket, and came out with a crumpled
piece of brown wrapping paper. He pushed it across the table. Creasy smoothed
it out and read the scrawled words. There were just three of them, spelled out
vertically.

It was
a very small scrap of paper, and the words had obviously been written in haste.
Creasy looked up into the old man's worn face. He said gently, "Mr
Bentsen, this is probably a dirty kind of joke. It's happened before. Jake was
killed on the Vietnam-Cambodian border twenty-six years ago."

The old
man's eyes were fixed on the dogtag and the scrap of paper. Without looking up
he said, "I took it to the MIA in Washington. They told me that as far as
they could tell it's authentic. Jake's body was never found; or the dogtag.
It's not possible to tell if the writing on the paper is Jake's. I took it to a
handwriting specialist who compared it with some of Jake's letters home. He
said he thought it might be."

Now he
looked up, but could not see into Creasy's eyes. Creasy had leaned forward and
was looking down intently at the metal disc and the scrap of paper.

The old
man said: "He used to write about you. Jake never really had heroes. In a
way he was his own hero. He lived in his own image. But he looked up to you
like no other man. He was twenty-one years old on that day, Mr Creasy, when he
was cut down. They never found the body. Nobody went back to look for him, Mr
Creasy."

Slowly,
Creasy lifted his scarred face. He reached out and touched the dogtag and then
picked it up. His fist closed around it. He said: "And you think that now
somebody should?"

Creasy
sighed, and answered: "It's not guilt."

Creasy
looked at his friend across the table. He had known Maxie for more years than
he liked to remember. As mercenaries, they had fought together at different
times over a score of years until Maxie had married and bought his bistro in
Brussels and settled down in a sporadic sort of way.

They
were sitting in that bistro now, together with a Dane called Jens Jensen and a
small, round-faced, bespectacled Frenchman known always by his nickname 'The
Owl'.

Jensen
was the ex-head of the Copenhagen Police's missing persons department. The Owl
was an ex-gangster and bodyguard from the Marseille underworld. Some years ago,
in a surrealistic series of events, Creasy had matched them together and they
now formed an unlikely partnership as a private detective agency which
specialized in looking for anything that was missing, be it a husband or wife,
a lost dog or a diamond. The Dane was in his late thirties, slightly overweight
with thinning blond hair and a schoolteacher wife and a young daughter. Apart
from his family and The Owl, his only other attachment was a portable IBM
computer which never strayed more than a few metres from his side. In an era
when people were talking about the Information Superhighway and the Internet,
Jens Jensen was already locked into them.

The
Frenchman was in his mid-forties, and hid his character behind the thick round
spectacles which gave him his nickname. The four people who mattered in his
life were Creasy and the Jensen family. He had two other attachments. One was
the Sony Walkman which was permanently fixed to his belt and which gave him the
only relaxation he ever needed: the sounds of the great classical composers. He
was a walking encyclopedia of their works and their lives, and for him God was
called Mozart. His other attachment was a MAB PA 15 pistol with the rotating
barrel. It nestled in a soft leather holster under his left armpit and, when
necessary, he used it with a speed and accuracy that would have turned Wyatt
Earp green with envy.

Jensen
and The Owl had been in Brussels looking for the runaway wife of a Danish
industrialist. They had located her the previous night, in the bed of a black
saxophonist. Since she was clearly content to be there, Jens had merely
retrieved the five-carat engagement ring and the heavy gold wedding ring for
his client, and phoned through the news that he may as well begin divorce
proceedings. He and The Owl had worked with both Maxie and Creasy on previous
jobs some years earlier and so they had naturally gravitated to Maxie's bistro
for their last supper in Brussels. They had been surprised and pleased to find
Creasy in attendance, and together with Maxie had listened to the story of the
supposedly dead GI and the mysterious return of the dogtag with the scrap of paper.

Creasy shook his head. "Maxie, you know how it is. You've been there dozens of times. You see a guy get hit and you have an instinct which tells you whether the hit was fatal or not. Nine times out of ten your instinct is right. I was running for cover but I saw the kid get hit. He went down like a spinning top. I was also hit, but not badly. I managed to get away."

"So what are you feeling guilty about?"

Creasy
sighed again with irritation. "I'm not feeling guilty. It's just that,
maybe, we should have gone back to make sure. I wasn't
hurt bad. I just needed a few stitches and a day at the MASH. Of course we
couldn't go back right away, but we could have returned a couple of days later,
in force."

The
Dane sipped at his wine and asked: "Were you in command of the unit?"

Creasy
shook his head. "No. It was a US Special Forces patrol. I was attached to
it as a very unofficial 'irregular'."

"So
it wasn't your responsibility?"

"No,
but the guy in command was an asshole. Maybe I could have got a few of the
other irregulars together and gone back to take a look."

Maxie
was looking at his friend with curiosity. He said: "For God's sake,
Creasy. In a situation like that, you don't go back looking for a guy you're
almost sure is dead." He gestured at the dogtag lying on the centre of the
table. "Twenty-six years later, that turns up with a piece of paper with
your name on it. Probably some bent mind, or maybe the guy who delivered them
was setting up the kid's father for a con. It's happened before."

Thank You, Goodnight by Andy Abramowitz
Lookout Cartridge by Joseph McElroy
And Then You Die by Iris Johansen
The Truth of Me by Patricia MacLachlan
Ultimate Prize by Lolita Lopez
Forever My Love (Historical Romance) by Constance O'Banyon
Ghosts of Tom Joad by Peter Van Buren
BELLA MAFIA by Lynda La Plante
His to Command #2: The Capture by Carew, Opal
Dark Heat: The Dark Kings Stories by Grant, Donna