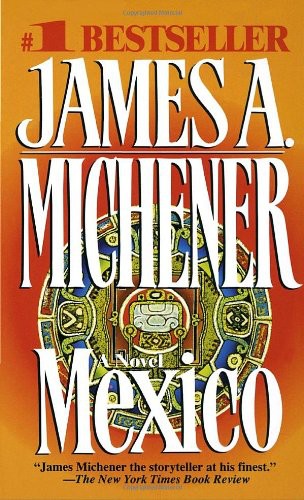 Here Is The Story Of An American Journalist Who Travels To Report On
the upcoming duel between two great matadors but who is ultimately swept up in the dramatic story of hi
s
Mexican ancestors--from the brutality and brilliance of t
he
ancients, to the iron fist of the invading Spaniards, to th
e
modern-day Mexicans battling through dust and bloods
hed
to build a nation upon the ashes of revolution.

Architectural splendors, frenzied bullfights, horrific hum; sacrifice: James Michener weaves them all into an epic human story that ranks with the best of his beloved, bestselling novels.

1.
The Cactus and the Maguey
.

This is a novel, and the Mexican city of Toledo, its citizens, its Festival of Ixmiq-61 and the three bullfights described in the book are all fictional. The Altomecs, who play a vital part in the narrative, are a fictional composite of several ancient Indian peoples. However, the three toreros who participate in the Saturday fight-- matadors Calesero and Pepe Luis Vdsquez, and the rejoneadora Conchita Cintr
o
n--are real persons in the history of Mexican bullfighting; I wanted to pay my respects to three friends who helped teach me about their profession. I must add, however, that the situations, incidents and dialogues concerning these toreros are products of my imagination and are not intended to depict any actual events or to change the entirely fictional character of this book.

1000 Clays are
peasants in England

1531 Building of cathedral at Toledo begun

1830 Bulls c
o
me from Guadalquivir

1942 Norman on duty in Pacific

THE CACTUS AND THE MAGUEY

I HAD BEEN sent to Mexico to cover a murder, one of a remarkable kind. And since it had not yet happened, I had been ordered to get photographs, too.

I was therefore burdened with unfamiliar gear--a large carrying case of Japanese cameras, some of which could photograph swift action occurring at a distance--and as my rickety bus trundled across central Mexico I wondered what I could do to protect these cameras if I followed my inclination to walk into the city from Kilometer 303.

I knew no one in the crowded bus and the cameras were far too valuable to entrust to strangers, so I resigned myself to staying on the bus and guarding them the seven remaining kilometers into the city. But as we approached Kilometer 303 the inchoate longing that had always possessed me at this curious spot in the highway surged over me with terrible force, and I was tempted to jump out and leave my cameras to chance.

Fighting back this childish impulse, I slumped in my seat and tried not to look at the road that had always haunted me, but I was powerless to keep my eyes away from it. Like many Mexican boys of good family, at thirteen I had been packed off to Lawrenceville School near Princeton, "to learn some English," my father had grumbled, and sometimes on the green lawn of that excellent school I had stopped and gasped for breath, choked by nostalgia for the road I was now on. Later at Princeton, where there were also many young men from Mexico, I would sometimes seek out boys who had known this area and I would ask haltingly, "Have you ever seen anything lovelier than the view of Toledo from that gash in the hills where the road winds down from Kilometer 303?" And if my friends had ever seen this miraculous spot for themselves we would indulge our homesickness and think of our city of Toledo, the fairest in Mexico, as it displayed its golden iridescence in the late afternoon sun.

As a matter of fact, I think I became a writer because of this scintillating view. It had always been assumed by my parents that I would graduate from Princeton as my ancestors from Virginia had been doing since 1764, and that I would then take one year of graduate work in mining at Colorado and return to the silver mines of Toledo, which my family had been operating for many years. But all this changed in my junior year at college, when I wrote a prize-winning essay that occasioned much favorable comment among the English faculty. It described the view of Toledo from a point just beyond Kilometer 303 as it might have been seen in sequence by an Aztec district governor in 1500, by Cortes in 1524, by a Spanish priest in 1530, by a German traveler in 1660, by an American mining engineer in 1866--that would be my grandfather--and by General Gurza in the revolutionary battles of 1918.

Actually, it is not correct to say that I wrote this essay that was to have such influence in my life. I started it, and the visions came to me so vividly, so directly from the heart of Mexico and from my own memories, that I merely recorded them. In a sense, this prize was a damnable thing, for long after I had become a professional writer I remembered the ease with which I had composed the essay. And I was never again to experience that facility. But the visions I conjured up that day have lived with me forever.

Now they possessed me, and I surrendered myself to them, my glowing memories of Toledo, and I was reacting to them in my sentimental way when I saw through the window of the bus a sight that captured my imagination. Two young Indian women wearing leather sandals, rough-cloth skirts and bright shawls, and with their hair in swaying braids, were walking along the road toward Toledo. Obviously, they were heading for the Festival of Ixmiq, the site of my assignment, and the soft rhythm of their movement, from the undulating braids down to their slim ankles, reminded me of all the Indians I had ever seen walking home from my father's mines, and I wanted to be with them as I had been forty years ago, and I found myself impulsively shouting in Spanish, "Halt the bus! Halt the bus! I'll walk in from here."

As the surprised driver ground down on his ancient brakes and as they squealed back in protest, I looked hurriedly about the bus in search of someone to whom I could entrust my bag of cameras, and* it may seem curious to a typical American who might have a prejudiced view of Mexico, but I could hear my Mexican mother saying: "In other parts of Mexico evil men may steal now and then, but in Toledo we have only honest people." Deciding to rely on her judgment, I quickly studied my fellow passengers to identify someone I could trust.

I saw in the rear an unusual-looking fellow who was watching me with aloof but sardonic amusement. He was about twenty-five years old, blond, quite handsome and dressed in what young people called a Pachuca sweater, that is, a huge, woolly, loose-woven affair that looked more like a shaggy tent than an article of clothing. It was much favored by Los Angeles beatniks who were infesting Mexico under one pretense or another and had come to serve as a badge of distinction. Even if the young man had not had his conspicuous blond hair the Pachuca sweater would have assured me that he was an American, for no self-respecting Mexican would have used this sweater for other than its original purpose: to keep sheepherders warm in the mountain pastures.

Lakota by G. Clifton Wisler
Confessions From an Arranged Marriage by Miranda Neville
Tango by Justin Vivian Bond
Secrets Dispatched by Raven McAllan
Loving An Airborne Ranger by Carlton, Susan Leigh
Finders/Keepers (An Allie Krycek Thriller, Book 3) by Sam Sisavath
The Things You Kiss Goodbye by Connor, Leslie
The Philip K. Dick Megapack by Dick, Philip K.
Aliena Too by Piers Anthony
Everyone has a Weak spot by J.J. Massa