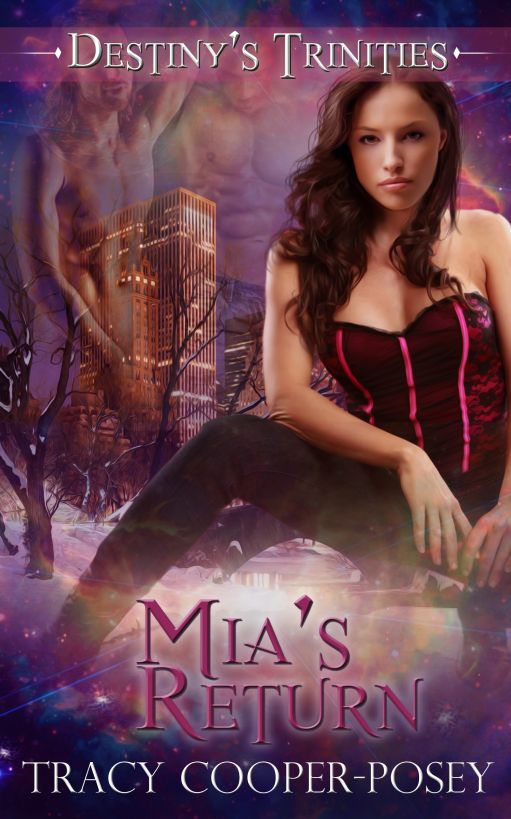 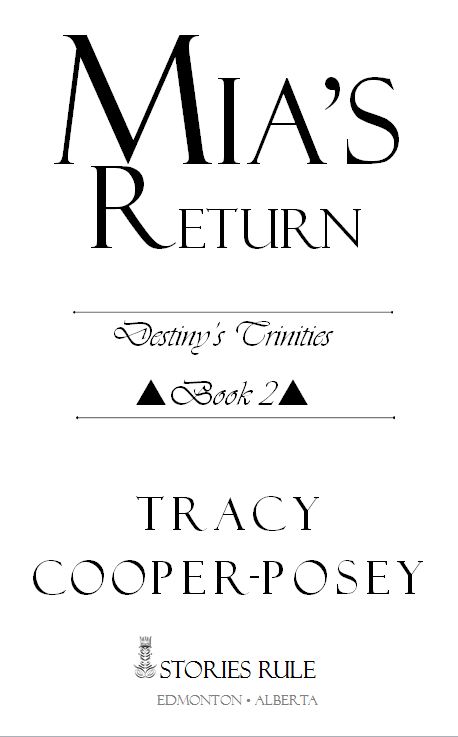 Alex has a past he’d
rather no one learns about…until Mia returns.
Ten years ago Alexander hungered for Mia Menendez and
for a single day they had indulged that passion before tragedy
struck. Now Mia is back, but she thinks Alexander died ten years
ago, and no man has been able to stir her heart since. The truth
could kill her.
Wyatt Whitacker, demon hunter, hates Alexander and all his kind.
But one look at Mia and her pulse-stopping curves and his scarred,
angry heart begins to melt and his body to rouse in ways he’s long
forgotten.
The bonding has begun...
Warning: This story features two super hot alpha heroes,
multiple sex scenes, including anal sex, MM sexual play, and MMF
sex. Do not read this book if frank sexual language and sex scenes
offend you.
No non-humans were harmed except for large numbers of Grimoré, who
died with satisfactory squeals…
Mia’s
Return
is the second book in the
Destiny’s
Trinities series
:
Book 1:
Beth’s Acceptance
Book 2:
Mia’s Return
Book 3:
Sera’s
Gift
(to be released October 18, 2013)

2010 CAPA Finalist,
Best Erotic Paranormal Romance
It was the bonding
of the males that intrigued me the most. I must say this was a
nicely rounded tale full of some very steamy lovemaking (notice I
didn’t label it sex?).
Alternative Read.com
Steamy is not enough to describe this book, the words
burn your eyes. Enjoyed this one and can’t wait to read what
happens in book 3
The Geeky
Bookworm
Once again [she] takes her readers on an adventure to a mystified
world filled with paranormal evil and danger that is absolutely
riveting. The reader is treated to some of the most arousing and
sensual sex scenes they’ll ever read.
The Romance
Studio

Alexander stretched back in his chair
and glanced at the clock on the monitor. Four p.m. The work day was
nearly over. He pushed back from the desk and looked out at the
snow batting against his office window. It was already dark and
Rockefeller Plaza looked frosty and uninviting, far below. Fifth
Avenue, despite the cold, was clogged with traffic. Friday
afternoon…everyone was trying to get home.

Ten years ago, he would have gagged at
the sight of such respectability and normality. He had lived life
on the edge, where he’d found the rush he’d needed. It was ironic
that he had to become a vampire to turn into a respectable
businessman.

Today, unlike most days, he’d been
unable to settle to the work. Something was prodding him and his
mind kept drifting back to his turning. Then there was the dream.
Well, not exactly a dream, as vampires didn’t sleep.

Alexander rested his head against the
back of the chair. What did one call a recurring series of images
that kept replaying in one’s mind and while they played out, one
was incapable of speaking and barely able to move? The compulsion
of the images was like a waking dream, or memories of events that
he had never actually experienced.

Each time, the sequence was almost the
same. It began with his name being whispered.

The voice was strange to him. Neither
friend nor foe. It was so low he could not tell if it was male or
female. It was as soft as a caress.

The first time he’d heard it, the voice
had merely made him look around and wonder who was calling him.
Each time after that, now that he knew what to expect, the simple
whisper was enough to make his entire body clench with instant hard
arousal and his cock to leap to almost painful attention.

With it came a scent that he
remembered; the dry, hot sandy fragrance of the sun-bleached
country surrounding San Diego.

It made him remember what it was like
to be human.

Then the images would begin to play in
his head.

He was on his knees, his arms stretched
out at shoulder height and secured in a way he could not see. In
his lifetime that had only happened once—the night he had died,
just before Zachariah had found him and made him a vampire. Those
moments had been ones of remorse and fear. But in this dream, the
position was one of submission and deep arousal, for there was a
woman before him and he was naked, vulnerable and completely at her
mercy.

In the way of dreams, he could not
properly see her face. Her dark hair kept falling over it or she
kept it turned from him. Or he simply could not see.

She stood before him, clothed in black,
her hands in his hair, tilting his head up to study him. He could
feel her approval although she spoke no words.

Then he felt the second presence.
Undeniably male. Warm, heated. Inches from him, pressing up behind
him.

Alexander groaned and began to tremble
in anticipation. He was helplessly bound, theirs to deal with as
they wished. His cock pulsed at the idea of being taken in as many
ways as they might manage between them, this anonymous pair, for he
could feel the female’s wish that he submit to exactly that.

The male’s hands gripped his hips and
the hot body pressed into him from behind. Alexander could feel the
man’s thick cock nestle into the crevice of his ass and his heart
leapt, for the shaft and head was already slick with lubricant. The
man’s strong hands were separating Alexander’s ass cheeks, seeking
entry. More hot lubricant was spread around his anus and pushed
inside.

The woman’s lips seared a hot imprint
on his chest, distracting him. Alexander gasped as her tongue
rasped over his stretched muscles and flesh, then felt the first
probe of the man’s cock against his ass.

The woman’s hands on his shoulders
brought him forward just a little, all that the bindings on his
wrists would allow. It was enough to ease entry and Alexander
moaned as the man’s cock pushed into him. His heart was thundering
and his cock was ready to explode.

He was lifted back to his knees again,
his back resting against the man’s chest. Alexander drew in a deep
breath, trying to ride his excitement, to make it last.

The woman approved silently. She got to
her knees in front of him, wordlessly admiring his body and that of
the man behind him, her chin down, her hair curtaining her face.
She reached for the man’s hand on Alexander’s hip and brought it
further forward, coaxing.

The hot hand curled around Alexander’s
aching cock and began to stroke.

Alexander cried out, almost coming at
the first electrifying touch. He could feel himself clenching
around the cock in his ass and just managed to barely ride out the
explosion of pleasure, panting.

“Three it is, then,” came the whisper
in his mind.

The woman leaned down low and took the
man’s hand away. Alexander bit back a protest, his hands curling
into fists and the bindings biting into his wrists, until her mouth
enveloped the head of his cock and her hot, wet lips slid down his
shaft.

The man’s hand dropped to cup and
massage his balls.

But even as he came, the dream wavered
and began to dissipate. In the dream, he was bound and could not
hold on to them. He cried out, “No, stay!” but it was useless.

The first time the waking dream caught
him, Alexander had been sitting reading a perfectly normal novel in
the apartment he and Diego shared. He emerged from the dream with a
chilled body, to discover he’d come in real life too. He’d showered
and washed away the evidence and tried not to linger over such a
vivid daytime fantasy.

The second time had been here in the
office. He knew then he wasn’t dealing with a simple fantasy and
lack of a sex life. But he wasn’t ready to speak to Diego and
Zachariah, the two vampires he went to for advice. This was too
weird even for the strange times they found themselves in.

The latest event was just now.

The back of his head throbbed.
Alexander rubbed at his scalp and halted, feeling chilled, as the
tips of his fingers tripped over tiny ridges and whorls. He’d never
felt them before but he knew what they were.

It was a scar from a bullet wound to
the back of his head. A scar that would have formed if he’d
survived the shot as a human, instead of becoming a vampire.

He put his hand back on the desk and
saw that it was not quite steady.

When Zachariah, Seaveth and Lindál had
melded to form the first trinity as a defense against the Grimoré,
Zach’s scar that had killed him as a human had reappeared.

Did that mean that he, Alexander, was
about to be chosen for the second trinity? Was the first stage of
bonding already underway? Was that what these dreams were all
about?

Perhaps that was why he could not see
the faces. He had not met the other two destined to be in the
trinity yet.

Alexander told himself to relax and not
jump to conclusions. He was not worthy to be chosen for the second
trinity. Not with his past. The ancient forces that decided these
things chose genuine heroes like Zachariah, who died protecting
innocents, and Lindál, who gave up his entire race and inheritance
in order to be with the ones he loved.

His office door pushed open and Diego
Savage kept it propped open with one arm and nodded his head down
the corridor. “I just saw the new receptionist. Kasey. Cassie.
Chrissie.
Momma mia
.” He grinned and threw himself into the
interview chair on the other side of Alexander’s desk. Diego was
blessed with abundant Latino good looks that he used mercilessly on
humans and vampires without qualms. “I might just have to ask that
one out.”

“Christina.” Alexander logged off his
computer, striving to look casual. Normal. “She’s human, Diego.
Zachariah thought it would be better to have the real thing manning
the reception area. She has no idea what we’re running here, so try
to keep your incisors sheathed, hmmm?”

Diego ran his tongue over his teeth. “A
tumble won’t hurt. She’s pretty.”

Alexander shook his head. “Don’t you
have any scruples left?” It was a wasted question. There were only
two things in life Diego cared about. Sex and hunting. All else was
irrelevant.

“I must have dropped them somewhere,”
Diego said, swinging his leg over the arm of the chair, completely
unmoved.

Zachariah stepped into the office.
“There you are.” He carried a McDonald’s sack. He sat in the other
visitor’s chair and yanked at his tie and unbuttoned his shirt.
“Diego, are you ever going to act like you’re taking this
seriously?”

Diego was wearing black. Black pants,
black sweater, black boots. “I can’t fight vampeen wearing a three
piece suit,” he growled. “Want me to hit them with my
briefcase?”

Zack shut the door with his heel and
dug into the McDonald’s bag.

Alexander reached into his outbox and
dumped the week’s summary folder in front of Diego. “Take that
seriously, then. We found jobs for forty-three vampires this week
and America’s in a recession. That’s jobs, identities, lives.
Meaning
.”