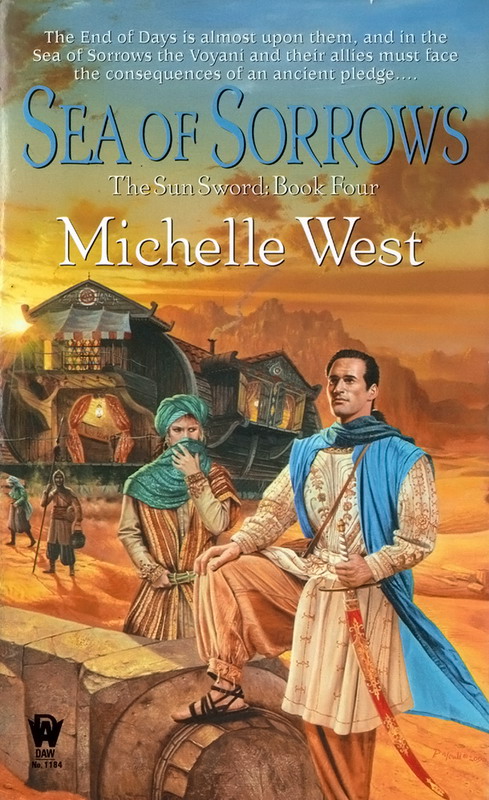 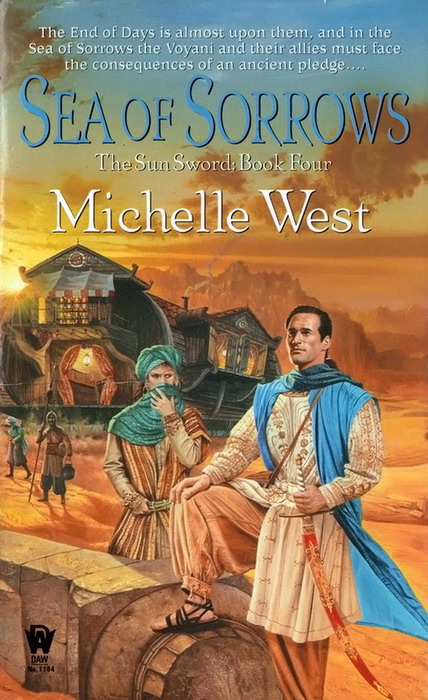 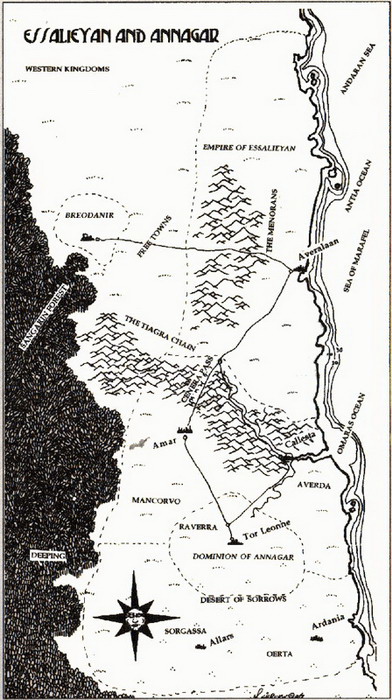 In the Voyani clans, the men will often use their name and their clan's name as identifiers (i.e. Nicu would be Nicu of the Arkosan Voyani or Nicu Arkosa.)

Adam
—Evallen's boy, the light of her life, and much indulged.Charming, easily charmed, he is
also
very perceptive, very sharp of wit; he keeps it to himself, for the most part.

Carmello—
Darker in coloring than Nicu, dark-haired, dark-eyed, one year his senior. They're friends, sword-mates.

Andreas
—Shorter than either Nicu or Carmello, but dark as the Voyani are dark; stocky and barrel-chested; one of Carmello's and Nicu's supporters.

Tatia
—Stavos' wife. Wide as well, but hardened by the sun and wind. Hair gray and long, eyes cutting and dark.

Elena
—Margret's cousin; the heir to the Matriarchy should Margret perish without a daughter. They are both close and rivals, Margret and Elena, and it is Elena that Nicu loves. Elena is a firebrand in most senses of the word; her hair is auburn red, her skin sun-bronzed, her eyes brown with green highlights.

Tamara
—Margret's aunt. Bent at the back, older in appearance than her older (and now dead) sister, she is Margret's support and strength, although she nags rather a lot. Closer than kin. She is Elena's mother.

Yollana of the Havalla Voyani
—Peppered, dark curls, almost black eyes. She is in her forties, healthy, wiry.

Elsarre of the Corrona Voyani
—Long, straight hair, dark with streaks of white. She was, until the death of Evallen, the youngest of the matriarchs at the age of 36.

Dani
—Slender, of medium height. His hair is long, thick and is always pulled back in a single braid. His beard is small, his face long, his eyes (as most Voyani eyes) are dark. He is Elsarre's Shadow; Elsarre has no brothers, and no cousins she chooses to trust with her life.

Maria of the Lyserra Voyani
—Hair white as northern snow, eyes blue as Lord's sky, she is slender and silent much of the time. She has the grace of gesture Serra Teresa possesses, and for this reason is less trusted than the other Matriarchs. Her husband is the kai of the clan Jedera;
Ser Tallos kai di'Jedera
. They have four children:

Mika
—Mika is broad-shouldered, dark-haired, dark-eyed as all clansmen; clean-shaven, as the Voyani are not.

Jonni
—Jonni is quiet; large-eyed, clear-skinned; he wears a beard.

Aviana
—The Matriarch's heir; she shelters with, and lives with her mother's kin in preparation for her eventual role. She loves her brothers fiercely, even if they are of the clans.

Lorra
—The family baby. Beautiful, but fair-skinned, she lives with her sister, and her mother's people.

He had lost them.

His memory was perfect, precise; it was his comprehension that was flawed. He had seen them, standing beneath the splintered bower of fallen trees, framed on one side by the shattered street, and on the other by the buildings that, thin as dry wood, had failed to stand against the least direct of the magical attacks the
Kialli
brought to bear. Behind them lay bodies; ahead, bodies as well. None of the fallen were
Kialli
.

He had seen the expression transform the Warlord's face as the pathetic demeanor of mortality fell away; had experienced the sharp anticipation that comes before battle. He had even seen the signature of ancient power as it cut across the pale insignificance of unadorned day—the mark of the Warlord's magic.

Between that moment and this, the Warlord had glanced at the only mortal left standing in the square—an insignificant mortal woman—and then, between the falling of a stall and the rising of the earth, he had vanished.

But he
had
fled.

A power such as his could not be concealed with ease if there were witnesses. Verdazan was not a seeker. Seekers were like mortal dogs—with the single exception of Lord Ishavriel, a lord Verdazan neither served nor crossed. But there was a seeker present. Verdazan growled his name, and he appeared, hands red with blood, eyes glistening.

"What have you been doing, you fool?"

"Hunting," the creature replied, all ability to dissemble gone.

"Hunt later. There is work for you to do."

"Hunt
later
." Black eyes were clear as day as Verdazan met them; the words were a hiss, like water spread thinly over an unbanked flame. "When would that
later
be? The Lord has forbidden us all hunting; he has forbidden us all reaving. It is only when he feeds himself that we are permitted to
see
what we cannot touch."

"And do you intend to live here, hunting? You will not live long. Either they will kill you—"

But the light in
Kialli
eyes was there to stay. Verdazan knew that there was only one way to quench the flame. "Where is the Warlord?"

"
Sargathan
," the
Kialli
lord growled, as another of the kin swept the roof off a quaint, fragile building.

Sargathan froze. His hands came up, curled into slender, slick fists. "L-lord." Dry word. Dry sound. He struggled against the binding of his name. Had he not been necessary, Verdazan would have killed him instantly for the insult.

And yet, beyond them both, roof having been peeled from a nearby insubstantial building, the occupants were riven from their illusion of safety, and then from the illusion of life in all its brief and fierce vibrancy. Their screams were short and sweet. Too short. And too sweet by far. Had it been that long?

No. Surely not. They had lived in the Hells for millennia; they had lived on the surface of the world for mere decades. The world could not exert so strong an influence that the
Kialli
themselves could be driven like hungry, lumbering beasts to feed at random, to feed in the heart of their enemies' stronghold.

"Where is the Warlord?"

Sargathan's lips pulled back slowly, as if the skin were being shed, to reveal teeth the length of his hands. Battle, like storm, was building in the air; in the crackle of electricity gathered but not yet released. He wanted it.

He wanted what the others wanted.

Instead he forced himself to listen to Sargathan's reply. "The Warlord is… gone."

Sargathan's laugh was bitter, but the madness had momentarily left it. "Where does the Warlord go when he tires of battle? If any of the seekers in the history of our Lord's War could have answered that question, he would be ours now. Or dead."

"The legends say he cannot be killed."

"Yes. And when his god existed, perhaps they were even true." The teeth and lips blended in smile. "Verdazan…"

A request. There were too many mortals here; too many
Kialli
. And no battle; no battle to sustain them.

"Our enemies will come."

"But your presence here has already been noted. Yes. Go."

The wild music was in the air. The smell of blood, the sharp tang of old wood that, when snapped, released the hidden scent of its pale center. Stone, dust, the fruits of the mortal market. And the trees, towering, ancient.

He smiled. Gave himself to the fight, or to the fight he thought might follow. There were so few mortals with power, and to that handful, word would travel slowly.

The city was burning.

Across the narrow stretch of bay, broken only by slender bridge, booth, and the guards chosen by the Kings' deputies, black smoke scudded like angry cloud through a flawless sky. Averalaan in winter.

Light glinted off his silvered hair; he stood in the stillness above water and wave, a living statue, pale and clothed in the drab colors of the Order. He almost turned away from what he saw, but he found that he could not; the tower that contained him had a balcony of stone, and the stone rails had become attached to his hand in such a way that he was forced to bear witness.

He heard the screaming.

Meralonne APhaniel, member of the Order of Knowledge, had heard so many screams in his life they did not affect him as they did others; they were but some of many sounds, and each told its own story. But when the first of the ancient trees fell, motion returned to the tower.