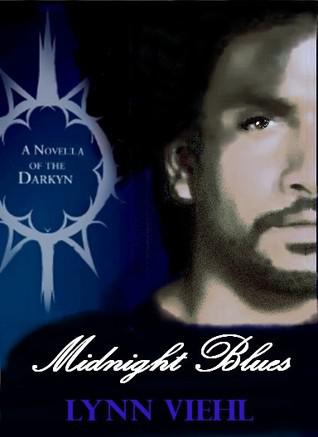 Midnight Blues
A Novella of the Darkyn
Lynn Viehl

A
t least he died with a smile on his face,” a forensic tech said to Fort Lauderdale Homicide Detective Adam Rafael Suarez said as he helped him turn over the corpse. The tech crouched down to inspect the victim’s tight, tanned backside, and the green-handled object still extruding from it. “And a… weed-whacker up his ass?”

“A cattle prod.” Detective Samantha Brown, Rafael’s partner, joined them. “Known on the streets as a ‘joy stick.’ ”

The tech grimaced. “I’m thinking he didn’t get much joy out of it, Detective.”

“Carjackers slip the tip through a window crack when the driver stops at a traffic light, zap, stunned driver,” she said, tapping the appropriate spot on her windbreaker. “You can buy them off the internet.”

“No carjacker would leave the prod behind.” Evan Tenderson, the assistant medical examiner, came to stand next to the body. “Prod… behind… get it?” He stopped chuckling when he caught Rafael’s gaze. “What’s your problem, Suarez? Didn’t Castro let you make puns back in Cuba?”

“Murder is not amusing,” Rafael said, “and I am not Cuban.”

“Hell, you Hispanicos all look alike to me.” Put out by the lack of response to his joke, Tenderson lit a cigarette and pointed one of his loafers at the victim. “Get these mitts covered, Brad.”

“A cattle prod,” the tech muttered as he bagged the victim’s hands. “What happened to the good old days, when people just killed each other with guns and knives?”

Rafael didn’t answer. In his good old days, people killed each other with crossbows, swords and battle axes.

Something about the color of the victim’s upper back didn’t seem right, and Rafael bent down to take a closer look. What had appeared to be random tan lines was a series of long, healed welts running from just below the neck to the small of the spine.

“Who called it in?” Samantha was asking Tenderson.

The assistant ME’s top lip curled over the end of his cigarette. “Do I look like a receptionist to you, Brown?”

“It came in as an anonymous tip, traced to a pay phone down the street,” the tech said as he clipped thin plastic bags over the victim’s hands. “The dispatcher said the caller sounded like a Latino.”

“Well, that narrows it down to, what, eighty-five percent of the population?” Tenderson gave Rafael a smile filled with malice and tobacco-stained teeth. “Good luck finding the perp.”

“These are lash marks,” Rafael told her, indicated the fresh scarring. “This man has been repeatedly restrained and whipped some time in the recent past.”

“Detective Suarez.” One of the uniformed officers who had been performing a sweep of the grounds around the crime scene walked up and handed Rafael a large evidence bag containing something made of spiked leather and heavy silver chains. “We found this draped on that statue over there.” He indicated the life-size figure of the Virgin Mary, which paired with a matching statue of St. Theresa stood guard in oval shell niches near the convent’s walls. “Someone smashed the flood light or we would have spotted it right away. Looks like leather bar stuff, or maybe a Halloween costume. No blood stains that I could see.”

“Like you’d know how to look, Dipshit.” Tenderson grabbed his case and headed for the statue.

“Halloween isn’t until tomorrow night.” Samantha eyed the bag. “Is there a full-head zippered mask in there?” When the patrol officer nodded, she turned to the body. “Lash marks, sexual torture and fetish wear. I’ll bet he’s a sub.” She caught Rafael’s blank look. “A submissive, into bondage, beatings and other assorted masochistic kinks.”

“Aroused by torture.” Rafael felt pity for the dead man. “Perhaps he was with a lover, and things went too far this time.”

“Doesn’t explain why the body was dumped here, though.” She glanced around. “No drag marks, no wheel ruts, and it’s at least three hundred yards to the nearest parking spot. He looks like he’s about one seventy-five, one eighty, right? That’s a lot of dead body to haul around.”

Rafael waited until the patrolman had walked away before asking, “Did you touch him yet?”

“No point.” Samantha possessed a psychic ability to see the recent past of the newly-dead through their blood. Although her life had changed dramatically three months ago, she could still use that last, human gift. “The body has been completely drained.”

Rafael and Samantha worked Homicide’s graveyard shift for a specific reason. Their colleagues on the force thought it was because they were both single and had no families to go home to. No one suspected the partners were both nocturnal, blood-dependent immortals known as Darkyn.

“What are you thinking?” Rafael asked her.

“Kinky sex and a bloodless body dumped in front of a Catholic convent.” Samantha switched off her PDA. “Someone from our little vampire club having a good time, maybe?”

Rafael heard the doubt behind the sarcasm. He had not been human for seven hundred years, but only a few months had passed since Samantha had become Kyn. She had yet to adjust to the enormous changes it had caused in her life, including discovering the fact that the man she loved had been a Kyn assassin for centuries. Some nights Samantha was more accepting of her situation than others.

“There is no scent trace, and no Kyn could drain a body and walk away from it. We would have found his attacker lying next to him, in thrall from drinking so much blood.” Rafael glanced up at the high walls of the cloister only twenty feet away. “It does seem as if the body was left here for a reason.”

“In front of the convent, or on our beat?” Samantha waved over the techs waiting to remove the body. “Has my boyfriend made some new enemies?”

“I know. He doesn’t kill humans. Or anyone. We hope. Unless they shoot me. Christ, ever since I died my life has gotten so complicated.” She buttoned the front of her jacket. “Let’s go talk to the ladies.”

The man and woman were coming to the door.

Of course they were, Dani thought as she watched them approach through the peephole. A dead body had been found in front of the sanctuary. They would come to the door, and ring the bell, and ask for someone in charge. They would have questions.

Questions for which they would want answers.

The sound of the bell made the women gathered around her turn en masse to stare at Dani.

“I will see to them,” she said, covering her hair with a long black veil that effectively shadowed her features. “Go back to bed.”

Before she had succumbed to advanced breast cancer, Sister Marguerite Aretino had given Dani her heavy ring of keys, along with strict instructions. All doors and windows were to be kept locked, and no outsiders were ever to be allowed inside the walls of the sanctuary. Boundaries had to be preserved, and the women of the sanctuary protected at all costs.

Guard them with your life
, Marguerite had whispered, clutching Dani’s hand as tightly as she had her rosary.
God demands this of you now, Daniela, as penance for your sins
.

Her sins. What were they? she wondered. Being born to her mother? Being a female child? Or being made by the Father to absolve—to pay—for the sins of others?

She had asked the old woman once, before Marguerite had brought her to America.
What I have done, what you wish me to do—when will it be enough
?
When may I be free of this duty
?

The slap to her face had hurt, but not as much as Marguerite’s answer:
You dare question the will of God
?
Without his mercy you would still be in the jungle, living like a savage. Or worse
.

Dani unlocked the double entry doors and stepped out before the man and woman on the other side could enter. “Yes?”

“Good evening, Sister. I’m Detective Suarez, Fort Lauderdale Homicide.” He gestured to the woman. “This is my partner, Detective Brown. We’d like to ask you some questions.”

Dani stared up at Detective Suarez, who seemed excessively tall and broad-chested for an American policeman. Her ear told her he was no American, however. His accent, like his neatly trimmed black mustache and beard, brought back memories of the men who came from Europe to visit the exiles in Argentina. They, too, came out of the night, so many silent, walking shadows, with blue glints in their hair and death in their eyes.

He wanted her to speak. She was staring at him like an awe-struck child instead of hiding her features. Had Marguerite lived, she would have beaten Dani until she couldn’t rise from her pallet for three days.

“I’m sorry.” She spoke to the woman, who smelled deliciously of coffee. “What questions?”

Detective Brown took out an electronic device that served as some sort of note pad. “We’ll start with: what’s your name and what do you do here?”

“My name is Sister Marguerite.” Dani slipped her hands into the ends of her sleeves. “I am in charge.”

Suarez took a step closer, almost looming over her. “You seem rather young to be running a convent, Sister.”

The woman’s earthy scent faded beneath the warm, sweet perfume of orange blossoms. Dani held her breath, and felt sweat prickling her scalp. What should she say, what should she say? Marguerite had insisted her English be perfect, but she had never permitted her much opportunity to speak with anyone. The Father hadn’t cared.

Say something polite
. “Thank you.” She switched her gaze to where two men in dark overalls were carefully lifting the dead man’s thin, tortured body. The body shifted, and the street light illuminated a narrow back striped by a terrible flogging. At this distance, she could see the pattern that the scars formed:

Suarez touched her sleeve, tugging her attention back to him. Eyes of darkness, a face filled with smooth angles and strength in hiding. For a moment she thought she recognized a quieter version of her own shock. Had he, too, read the name that had been beaten into the poor man’s back? Did he know what it meant?

Tundra Threat by Sarah Varland
Bone Magic by Brent Nichols
Everly After by Rebecca Paula
THE 1,500-Calorie-a-Day Cookbook by Hughes, Nancy S.
The Dreams of Cardinal Vittorini and other Strange Stories by Oliver, Reggie
Indigo Nights: A Sexy, Contemporary Romance by Louise Bay
A Mother's Gift by Maggie Hope
Redeemers by Enrique Krauze
The Hanged Man by P. N. Elrod
For Love of the Duke (The Heart of a Duke Book 2) by Christi Caldwell