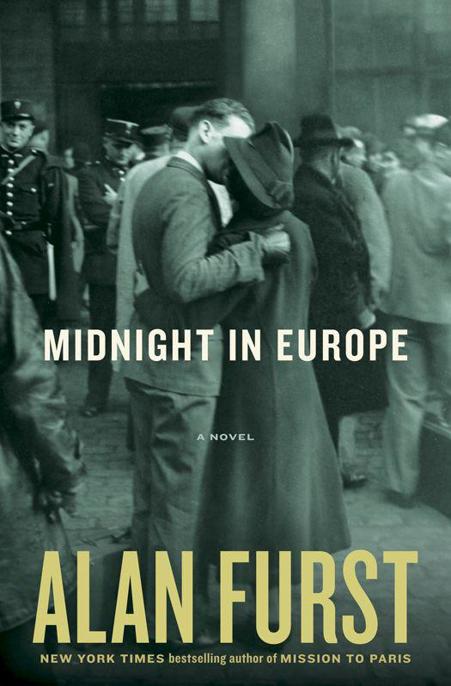 Midnight in Europe
is a work of fiction. All incidents and dialogue, and all characters, with the exception of some well-known historical and public figures, are products of the author’s imagination and are not to be construed as real. Where real-life historical or public figures appear, the situations, incidents, and dialogues concerning those persons are entirely fictional and are not intended to depict actual events or to change the entirely fictional nature of the work. In all other respects, any resemblance to persons living or dead is entirely coincidental.

RANDOM HOUSE and the HOUSE colophon are registered trademarks of Random House LLC.

“The lamps are going out all over Europe.
We shall not see them lit again in our time.” 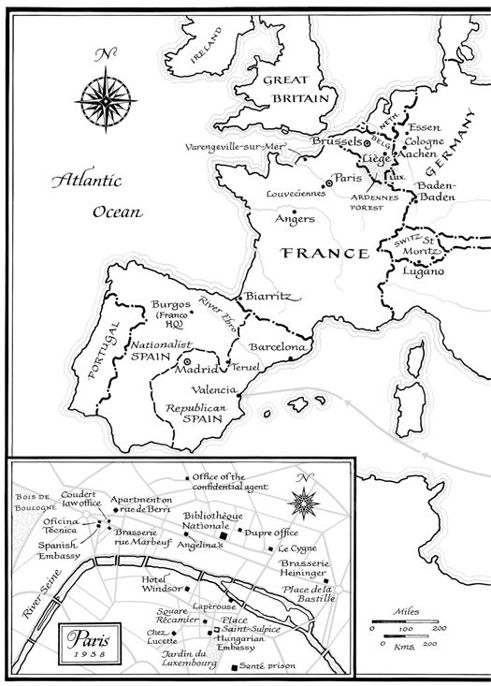 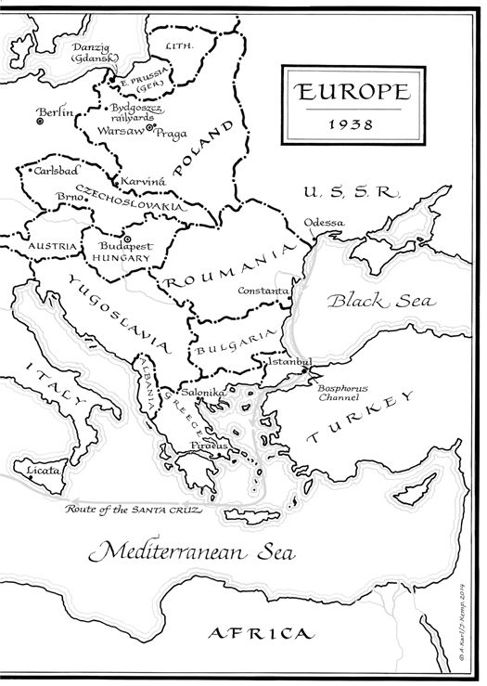 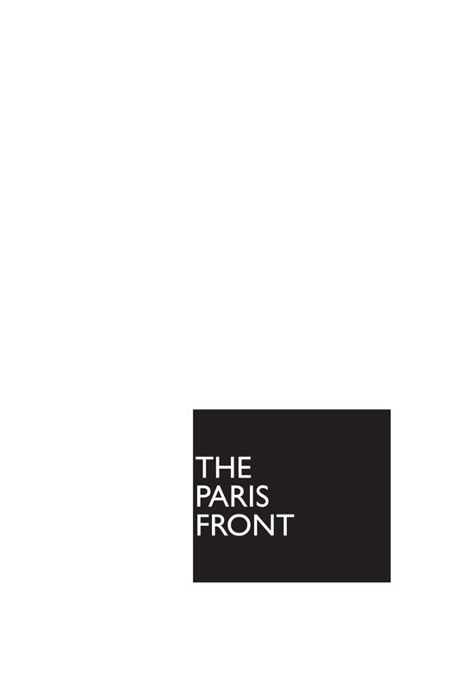 O
N A SOFT, WINTER EVENING IN
M
ANHATTAN, THE FIFTEENTH OF
December, 1937, it started to snow; big flakes spun lazily in the sky, danced in the lights of the office buildings, then melted as they hit the pavement. At Saks Fifth Avenue the window displays were lush and glittering—tinsel, toy trains, sugary frost dusted on the glass—and a crowd had gathered at the main entrance, drawn by a group of carolers dressed for a Dickens Christmas in long mufflers, top hats, and bonnets. Here then, for as long as it lasted, was a romantic New York, the New York in a song on the radio.

Cristián Ferrar, a Spanish émigré who lived in Paris, took a moment to enjoy the spectacle, then hurried across the avenue as the traffic light turned red and began to work his way through the crowd. In a buckled briefcase carried under his arm, he had that
morning’s
New York Times
. The international news was as usual: marches, riots, assassinations, street brawls, arson; political warfare was tearing Europe apart. Real war was coming, this was merely the overture. In Spain, political warfare had flared into civil war, and, the
Times
reported, the Army of the Republic had attacked General Franco’s fascist forces at the Aragonese town of Teruel. And, you only had to turn the page, there was more: Hitler’s Nazi Germany had issued new restrictions on the Jews, while here was a photograph of Benito Mussolini, shown by his personal railcar as he gave the stiff-armed fascist salute, and there a photograph of Marshal Stalin, reviewing a parade of tank columns.

Cristián Ferrar would force himself to read it, would ask himself,
Is there anything to be done? Is it hopeless?
So it seemed. Elsewhere in the newspaper, the democratic opposition to the dictators tried not to show fear, but it was in their every word, the nervous dithering of the losing side. As Franco and his generals attacked the elected Republic, the others joined in, troops and warplanes provided by Germany and Italy, and with every victory they boasted and bragged and strutted:
It’s our turn, get out of our way
.

He’d had a long, long day. A lawyer with the Coudert Frères law firm in Paris—“coo-DARE,” he would remind his American clients—he’d spent hours at the Coudert Brothers home office at 2 Rector Street. There’d been files to read, meetings to attend, and confidential discussions with the partners, as they worked on matters that involved both the Paris and the New York offices, whose wealthy clientele had worldwide business interests and, sometimes, eccentric lives. Coudert had, early in the century, famously untangled the byzantine affairs of the son of Jacques Lebaudy. Lebaudy
père
had earned millions of dollars, becoming known as “the Sugar King of France,” but the son was another story. On receipt of his father’s fortune he’d gone thoroughly mad and led a private army to North Africa and there declared himself “Emperor of the Sahara.” In time, the French Foreign Legion had sent the emperor
packing and he’d wound up living on Long Island, where his wife shot and killed him.

But the difficulties of the Lebaudy case were minor compared to what Coudert had faced that day: the legal hell created by the Spanish Civil War, now in its seventeenth month; individuals and corporations cut off from their money, families in hiding because they were trapped on the wrong side—whatever side that was—burnt homes, burnt factories, burnt records, with no means of proving anything to insurance companies, or banks, or government bureaucracies. The Coudert lawyers in Paris and New York did the best they could, but sometimes there was little to be done. “We regret your misfortune, monsieur, but the oil tanker has apparently vanished.”

Ferrar had left the Coudert office at five-thirty and headed up-town to his hotel, the Gotham, then, as a favor to a friend at the Spanish embassy in Paris, he’d walked over to the Spanish Republic’s arms-buying office at 515 Madison Avenue. Here he’d picked up two manila envelopes he would take back to Paris—the days when you could trust the mail were long gone. He went next to Saks, meaning to buy Christmas presents—a hammered-silver bracelet and a cashmere sweater—for a woman friend he was to meet at seven. This love affair had gone on for more than two years as, every three months or so, he flew to Lisbon, where one could take the Pan Am flying boat to New York.

Actually, Ferrar was not precisely a Spaniard. He’d been born in Barcelona and so thought of himself as Catalan, from Catalonia, in ancient times a principality that included the French province of Roussillon. A Castilian from Madrid might well have recognized Ferrar’s origin: his skin at the pale edge of dark, a gentle hawkish slope to the nose, and the deep green eyes common to the Catalan, with thick, black hair combed straight back from a high forehead and cut in the European style; noticeably long, and low on the neck. In June he’d turned forty, rode horseback in the Bois de Boulogne twice a week, and stayed lean and tight with just that
exercise. Heading toward the entrance to Saks, he wore a kind of lawyer’s battle dress: good, sober suit beneath a tan, delicately soiled raincoat, fedora hat slightly tilted over the left eye, maroon muffler, and brown leather gloves. With the briefcase under his arm, Ferrar looked like what he was, a lawyer, a hardworking paladin ready to defend you against Uncle Henry’s raid on your trusts.

As he reached the entry to the department store, Ferrar saw once again a thin little fellow who wore gold-rimmed spectacles, hands in the pockets of a blue overcoat, shoulders slumped as from fatigue or sorrow, who had followed him all day. This time he was leaning against the door of a taxi while the driver read a newspaper by the light of a streetlamp. The man in the blue overcoat had been with Ferrar at every stop, waiting outside at each location but not at all secretive, as though someone wanted Ferrar to know he was being watched.

Now who would that be?

There were many possibilities. For the secret services of Germany, Italy, and the USSR, the civil war in Spain was a spymaster’s dream, and attacks were organized against targets everywhere in Europe: politicians of the left, diplomats, intellectuals, journalists, idealists—all much-favored prey of the clandestine forces, be they fascist or communist. At embassies, social salons, grand hotels, and nightclubs, the predators worked day and night. As for the man who followed him, Ferrar suspected he might be a local communist in service to the NKVD, since the USSR—the Republic’s crucial, almost its only, ally—famously spied on its enemies, its friends, and everybody else. Or could the man be working for Franco’s secret police?

Ferrar was determined not to brood about it, he could think of nothing to do in response, and he was not someone easily intimidated. He dismissed the man’s presence with an unvoiced sigh, pulled the massive door open, and entered the store. Barely audible above the din of the shopping crowd, yet another band of carolers was singing “joyful and tri-umm-phant.” Momentarily adrift in an
aromatic maze of perfume and cosmetics counters, Ferrar searched for the jewelry department. The man in the blue overcoat waited outside.

The very perfection of what the gossip columnists would call “the local saloon.” It had been there forever, on East Thirty-Seventh Street in Murray Hill, a neighborhood of rooming houses and small hotels, a low rung on the middle-class ladder where office workers, salesclerks, and people who did God-only-knew-what lived in genteel poverty. But their lives were their own. The neighborhood had, for no particular reason, a seductive air of privacy about it. You could do what you liked, nobody cared.

Delaney’s, as it was known, was down four steps from the sidewalk, open the door and the atmosphere came rolling out at you; decades of spilled beer and cigarette smoke. Cristián Ferrar sat in a booth by the wall; a stout wooden table—its edges scarred by cigarette burns—was flanked by benches attached to high backs, the tops handsomely scrolled. He had his
New York Times
spread out before him, ashtray to one side, whiskey and soda on the other.