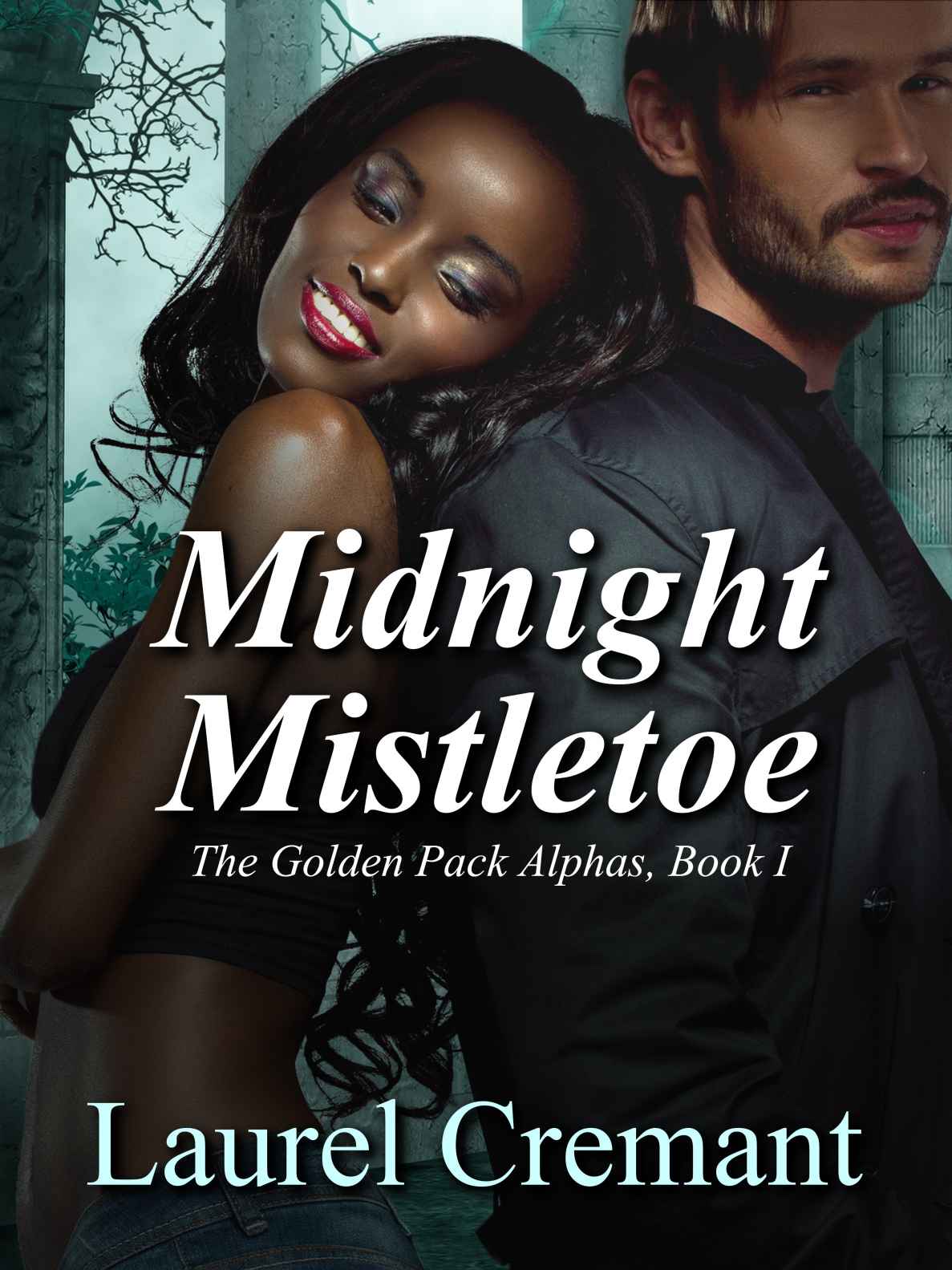 Other Books by Laurel

All were-hybrid, Georgia Walker wants for Christmas is to spend some time away from her pack and in particular, away from one increasingly dangerous enforcer turned Beta. She has every intention of spending her days basking in the warm Caribbean sun and indulging in an island fling, or two. Anything to forget the way a certain were made her pulse race and skin tingle.

Marcus Legrand has only one goal this holiday season, bring Georgia home and finally claim her for his own. Convincing the strong willed ice princess will take all of his skill and patience, but Marcus is no stranger to hunting prey. He has every intention of putting both his rank and heart on the line.

(The Golden Pack Alphas, Book I)

All rights reserved. This copy is intended for the original purchaser of this book ONLY. No part of this book may be used or reproduced in any manner whatsoever without written permission of the author except in the case of brief quotations embodied in critical articles or reviews.

This is a work of fiction. Names, characters, places and incidents either are the product of the author’s imagination or are used fictitiously, and any resemblance to actual persons living or dead, business establishments, events or locales, is entirely confidential.

To my amazing husband, who never fails to cheer me on with any endeavor.

To my family who inspires me every day.

To all of my great friends who still love me even after I’ve disappeared in my writing cave for days, weeks and months.

And last but definitely not least, to all of the readers who have given me the priceless pleasure of taking them on journey’s through my wacky and often times naughty psyche.

Standing motionless at the floor to ceiling windows of his hotel room, Marcus Legrand looked out at the umbrella dotted beach beyond. He savored the weight of anticipation and awareness that had cloaked him ever since he’d learned that Gigi had run—again.

A smile twitched his lips. She would never admit that, nor would she appreciate his use of the pet name he’d assigned to her. Strong willed and stubborn Georgia Walker never ran from anyone or anything—except him.

From the moment he’d first visited her pack, the prickly woman loved to avoid and drive him crazy in equal measure.

As a High Council
Maat
, an enforcer of the laws and rites agreed upon hundreds of years ago by the original wolf packs, he preferred his life well ordered. He knew all too well the chaos and destruction that came with flaunting pack rules.

Gigi didn’t seem to care. She was out there on the beach. No doubt celebrating her supposed coup in evading him.

It always amused Marcus how easily a person underestimated a
were
—specifically a werewolf—specifically
him
. But Gigi should have known better. As the daughter to Darius, the Golden Pack alpha she was more than privy to Council politics and the foolishness in taunting him, and yet she did it anyway.

Her willingness to pick a fight stirred more than just the wolf in him—it woke the man. It had been a long time since any woman, shifter or otherwise aroused any interest in him. Even longer since one did more than make his cock twitch in interest. But from the moment he saw her and inhaled her heady scent, he’d wanted nothing more than to throw her over his shoulder and steal her away.

He’d been overwhelmed with that urge, and even now, after a year to come to terms with what it all meant, he struggled to tamp down on the compulsion to drag her to the nearest surface and fuck her until they both passed out into oblivion.

I have to catch her first.

Marcus gave a mental shrug. For him, the hunt was always the easy part. He reached up and ran his left hand along his opposite arm. Although, covered by the thin layer of his shirt, he traced the fine lines of the tattoos beneath. Every one as firmly etched in his memory as on his skin. Each symbolizing a kill or judgment made. They were reminders of what he was and the role he’d chosen to play.

As a lone wolf, the Council had recruited him years ago—more years than most knew. They’d taken him in, shielded his true origins and in return he’d become their hammer. The one they called upon to meet out justice. He’d never regretted his choice.

He understood the necessity of having a feared weapon on your side when approaching the bargaining table. Fear often created the best compromise. When the Council called upon his services it signaled the end of negotiations.

He’d become accustomed to people watching him with unease and deference. Even the few women he engaged with, were more interested in the thrill of sleeping with an enforcer, than anything else. Yet Georgia’s eyes contained a different look entirely.

Her deep brown eyes challenged and aroused with each look, each raise of the brow and each drop of eyelash.

Thinking back on the cool reception she’d given him when he’d first arrived in Golden Valley a year ago, the sadistic part of him smiled at his choice of conquest. Unlike other women, Gigi was not in awe of him. She didn’t hold her tongue or pretend meekness. Her countenance screamed alpha, and had his wolf—and another part of his anatomy, standing up to take notice from the start.

She’d stood at her father’s side, tall and proud, her long dark hair falling around her shoulders in waves, framing toffee skin and high rounded cheek bones. Her plush mouth firmed in disdain and she quirked one delicate eyebrow at him.

Her husky voice delivered the cutting words without a single waver or pause. He’d noted it as possibly the sexiest thing he’d ever heard.

At first he’d believed his reaction stemmed from her heat cycle. He could smell it on her—the thick musk of her arousal swirling through his senses, almost drowning him in the need to slant her stubborn chin up and sink his teeth into the succulent flesh of her neck.

Despite her obvious initial dislike of him, her eyes had flared with an answering blaze of attraction.

Meeting her tilted his whole world off its axis and he knew things would never be the same.

Whether she chose to admit it, they’d both chosen at that moment to withdraw to their respective corners. He’d come to the valley on official orders from the Council and had no time for small dalliances or otherwise. Whatever reasons she had for retreating remained her own.

He’d been sent to help deal with a rogue pack. Gigi’s father, not wanting to endanger his own people, had called upon the Council to help deal with the matter. Rogue wolves were dangerous on several levels. Not only did they refuse to obey the rules set in place to protect
weres
from discovery, they had no respect for life, human or otherwise.

Under normal circumstances, the Council would not have stepped in. Most rogue packs, died a natural death. The absence of no true alpha in the group always led to them killing each other off in a useless quest to dominate. But this pack had been different. Not only were they deliberately breaking the rules, they’d begun kidnapping humans and turning them. That, the Council could not ignore.

Dealing with them hadn’t taken much time. But there had been some casualties, one of them being Darius’ Beta. In the end the group had been defeated and dispatched. Justice was met and his job was done—seven new feathers added to his collection. However during his stay, he’d developed an attachment to the Golden Pack that was…unexpected.

After delivering his report to the Council, Marcus had returned to Golden Valley—and to Gigi.

As an enforcer he had the right to set up base where ever he chose, and for the time being, he’d settled on the biting cold mountains of Golden Valley. He’d even agreed to play temporary beta to Darius.

He liked the pushy alpha. His twinkling eyes, booming voice and ready smile were too easily misconstrued as trusting and easy-going, but Marcus had seen him in battle. Darius was one of the shrewdest wolves he’d ever encountered—and deadliest. Traits he had no doubt passed down to his only daughter.

The dynamic between Darius and the other wolves intrigued him.

None in the group resented their alpha’s choice in mate, Genevieve, Gigi’s mother. Her being a witch didn’t seem to bother the other wolves. Yet for some he’d seen that an obvious weariness of Gigi herself existed.

Her hybrid status, put them on edge. A part of them questioned her right to belong. In that he could sympathize with her. He understood the difficulties of being different in a world that expected sameness.

It was strange to him—being surrounded by a collective. The feeling wasn’t entirely bad, just different.

He’d never given any consideration to becoming part of any one pack. Both his history and need for privacy didn’t lend themselves to community living.

Yet he’d stayed. He set up house in a small bungalow close to Darius’s large home. He’d chosen the location in small part to be available to Darius and in larger part to be near Gigi—her cottage only a few yards on the other side of the main house. Each day he grew more attached to the land and each day wanted Gigi with a need that bordered on obsession.

She avoided him—evaded his presence with a skill he had to admire. He reveled in their power struggle.

Just before her recent disappearing act, he’d found her leaving her father’s office, back straight and eyes flashing.

He reached out and touched her arm, pausing her marching progression.

“In a suicidal mood today?”

“With you? Always. Now tell me what has you so upset.”

Her nostrils flared and she leaned into him.

“You. You bother me. When are you going to saddle up and find yourself a new pack to annoy?”

“Maybe as soon as you stop running.”

Her lips curled up in a sneer.

“I don’t run from anyone Legrand. If I choose to not be around you it means that I see no need in spending time with arrogant pricks.”

He stroked a hand up her waist and brushed a fingertip over one tight nipple.

“And yet, those sensitive nipples of yours say differently every time I see you.”

She returned the favor, running a hand down his front and cupped his hard cock.

“And your dick seems to have the same problem,” she said, her voice almost sickly sweet.

Their gazes held as he pinched her nipple, and she squeezed his shaft.

“It would be a shame for you if I had to rip it off,” she whispered before wrenching away from his hold and storming away.

He’d watched her walk away with a smile on his face. Even the threat of dismemberment hadn’t been enough for his arousal to subside. He considered each encounter with her as progress. Soon, she would admit that there was more between them than just simple attraction.

Focusing back on the beach he narrowed his gaze a specific pink umbrella poised haphazardly in the sand.

He touched a hand to his suit pocket, feeling at the note folded inside. Darius, had requested, that he bring Gigi home for Christmas. But even if Darius hadn’t asked him to find Gigi, Marcus would have come for her. They’d spent the last year tiptoeing around each other, and it had to stop.

Dropping his hands down to his sides he turned from the window and strode to the door. It was time to go hunting.