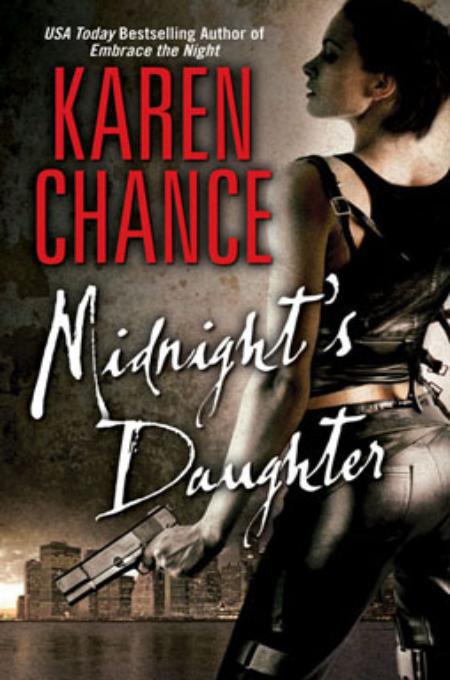 ‘Chance is a great writer of supernatural fantasy that is on a par with the works of Kim Harrison, Charlaine Harris and Kelley Armstrong’
The Best Reviews

‘A really exciting book with great pacing and a huge cast of vivid characters. This is one of my favourite reads of the year’ Charlaine Harris,
New York Times
, bestselling author of
Definitely Dead

‘A grab-you-by-the-throat-and-suck-you-in sort of book, with a tough, smart heroine and sexy-scary vampires. I loved it – and I’m waiting anxiously for a sequel’
New York Times
bestselling author Patricia Briggs

To find out more about Karen Chance’s books, please visit her website
www.karenchance.com
.

First published in the United States of America by Onyx, an imprint of New American Library, a division of Penguin Group (USA) Inc. 2008

This is a work of fiction. Names, characters, places and incidents either are the product of the author’s imagination or are used fictitiously, and any resemblance to actual persons, living or dead, business establishments, events or locales is entirely coincidental

To Anne Sowards, a great editor

My least favorite dead guy had his feet up on my desk. I hate that. His boots were probably cleaner than my blotter, but still. It showed a lack of respect.

I pushed the offending size tens onto the floor and scowled. “Whatever it is, the answer’s no.”

“Okay, Dory. Your call.” Kyle was looking amiable—never a good sign. “I should’ve known you wouldn’t care what happened to Claire. After all, there’s not likely to be any money in it”—he paused to glance around my rathole of an office—“and you don’t appear to be in a position to do anything gratis.”

I had been on the way to my feet to haul his undead ass out the door, but at his words I slowly sat back down. Kyle was a real lowlife, even for a vamp, but once in a while he heard something useful—which explained why I hadn’t yet given in to temptation and staked him. And where Claire, my roommate and best friend, was concerned, I’d take anything I could get. She’d been missing for almost a month, and I’d already gone through every lead I had. Twice. Before loser boy showed up, I’d been about to start through the file a third time in case I’d somehow missed something, even though I knew I hadn’t. And every hour that passed made it less likely I’d be pleased with what I found at the end of the search.

“Talk,” I said, hoping he’d make me beat it out of him. I had a lot of pent up frustration that needed to go somewhere. But, of course, he decided to find some manners. Or what passes for them in our circle.

“Word is, she’s alive. I thought she’d have been juiced and packed up for sale by now, but talk on the street is that she wasn’t kidnapped at all.”

By “juiced” he meant a disgusting black-arts process in which a projective null, a witch or wizard capable of blocking out magical energy for a certain radius, is made into a weapon known as a null bomb. The null’s energy is siphoned away to make a device capable of bringing all magic in an area to a standstill. How far and how long the effect extends depends on the strength of the null being sacrificed—the younger and more powerful, the more energy she has to give. And Claire was both very young and very powerful.

Making her even more attractive was the fact that the harvesters, as the mages who specialized in the very illegal practice were known, could currently command a premium for their wares. The Vampire Senate, the self-styled guardian of all North American vampires, was at war with the dark mages of the Black Circle, and the price for magical weapons had gone through the roof. The idea that someone had taken Claire to make into a tool for their stupid war was the main reason I was running myself ragged trying to find her.

“The rumor is that she ran off with one of Michael’s crew,” Kyle was saying. He leaned in to smile in my face, showing enough fang that I knew how much he was enjoying this. He’d tried to chat me up when we first met and hadn’t taken my screams of laughter well. He’d been waiting for something to throw in my face, and this was his big chance. “Seems she got knocked up.”

I smiled back. “That little lie is going to cost you,” I promised, slipping a hand into my desk drawer. Claire, the witch with girl power practically stamped on her forehead, running off with a lowlife connected with Michael’s stable? Didn’t think so.

Kyle held up grubby hands with telltale brown stains on them. Leftovers from whoever had been lunch, I guessed. I would have advised him that his love life might improve if he paid someone to scrape the dried blood out from under his nails once in a while, if I hadn’t thought he’d eat the manicurist.

“No lies, Dory. Not between you and me.” He sat back and crossed his legs, looking far too much at ease for my taste. “And you haven’t heard the best part yet. Rumor has it that the father’s not exactly human, if you know what I mean.” His grin turned feral. “Passing me up because you were afraid to bring another half-breed into the world was a waste of time, wasn’t it? Looks like you’re about to be auntie to a bouncing baby dhampir.”

I didn’t have to glance in the mirror behind his head to know that my expression hadn’t changed despite the shock. After five hundred years of practice, anyone can perfect a decent poker face. Even someone as naturally… expressive… as me.

“Actually, I shot you down because homicidal psychos with dog breath don’t turn me on,” I said pleasantly, pulling my hand out of the drawer and throwing an unstoppered vial in his face. The holy water stuff is a myth, but there are other concoctions that don’t sit too well with the smarmy undead, and that was one of them. The dragon’s blood wouldn’t kill him, but he wouldn’t look too good for a few days, either. Of course, since it was Kyle, it was a good bet no one would notice the difference.

I tossed his screaming body out the window after he gave up the rest of the few facts he knew, like the name of a bar where I might locate a few of Michael’s thugs. He bounced off the sidewalk three stories below and slammed into a parked car, denting the metal with his forehead before crawling off down the street. Too bad it wasn’t daylight.

If Claire had been harvested, she was almost surely dead by now. But there was a slim chance that Kyle the perpetually smarmy had actually heard something useful. And any lead, however slim, was better than what I had.

I paused only long enough to grimace at my reflection, which looked almost as bad as I felt. I needed makeup to conceal the dark circles that were currently almost as black as my eye color, and washing my greasy brown hair for the first time in a week wouldn’t hurt, either. No chance of doing the femme fatale thing tonight, but that was okay by me. I get cranky without a full eight hours a night of beauty sleep, and since I’d had maybe that much in the past week, I was feeling surly. I picked up a length of lead pipe and added it to the collection under my coat. There were plenty of other ways to get information.

An hour later, I was sitting on a pile of corpses, frowning. The bar where I’d found two of Michael’s stable feasting on a half-dead teenager was now a wreck of shattered tables and broken glass. I shifted to avoid the pool of multicolored blood seeping from the bodies under me and stared into the darkness outside. Kyle, it seemed, had not been lying about everything. As one of the boys had helpfully explained after I introduced his head to the bar top a few dozen times, Michael did have Claire. And if Kyle hadn’t lied about that, there was the teeniest chance he hadn’t lied at all. But I’d still have to see it to believe it.

I tossed a handkerchief at the dazed boy leaning on the body of one of his recent attackers. He looked at it blankly. “For your neck,” I explained. Vampires didn’t have to bite to feed—in fact, it was against the rules, since it left hard-to-explain corpses behind if they got carried away. But no one had been paying much attention to the law lately. Usually, that was the way I liked it, but it did leave me with a dilemma now.

Normally the mages would be willing to help a witch in a jam, especially a powerful null like Claire. If for no other reason, she was a useful tool they didn’t want to lose to the magical black market. The Silver Circle, the so-called white-magic users, would doubtless have sent some of their thugs after Michael in more-normal times, but I doubted they could spare any at the moment. There was a war on, and they were allied with the Senate against an array of forces that were scary enough to make anyone blanch. Not to mention that they hated my guts. If I wanted Claire back, I was going to have to manage it myself.

“What—” The boy stopped, swallowed and tried again. “What were those… things?”

I got up, moved around the bar and reached for the top shelf. What the hell, I was going to torch the place anyway. “You want a drink?”

He tried to get to his feet, but was too weak and collapsed again. “No,” he said dully. “Just tell me.”

An Inconvenient Friend by Rhonda McKnight
Steamed to Death by Peg Cochran
Refugees by Catherine Stine
Death Clutch by Brock Lesnar
Where All Souls Meet by S. E. Campbell
Dark Moon by Victoria Wakefield
The Sun in Your Eyes by Deborah Shapiro
The Night I Got Lucky by Laura Caldwell
Maggie's Ménage by Lacey Thorn
Magic Bleeds by Ilona Andrews