Mieko and the Fifth Treasure 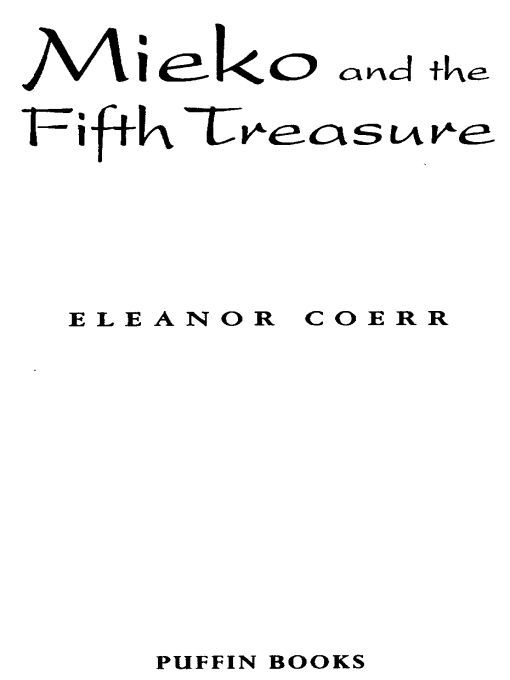 Table of Contents
Title Page
Acknowledgements
Dedication
Copyright Page
Â
ONE - MIEKO
TWO - GRANDMA'S HOME
THREE - SCHOOL
FOUR - GRANDPA
FIVE - WAITING
SIX - YOSHI
SEVEN - THE CONTEST
EIGHT - AUNT HISAKO
NINE - FRIENDSHIP
TEN - HOPE
ELEVEN - THE TREASURE
Â
Author's Note
Mieko has lost the most important part of painting
â
the fifth treasure.
Â
Mieko wanted to stay home. She was bitter about leaving her parents. She was bitter about leaving her friends. She was frightened about going to a new school And she hated the horrible bomb that had ruined everything.
“With all the bitterness and hate inside of me,” she thought, “there isn't room for any beauty.” The fifth treasure was gone.

“A sensitively and beautifully crafted story. This author has created a vivid portrait of courage, drawn from a time that deserves to be remembered.”
â
Publishers Weekly,
starred review
Â
“A warm, sensitive, and well-written story with wide appeal.”
â
School Library Journal
OTHER PUFFIN BOOKS YOU MAY ENJOY
The Summer of the Swans
Betsy Byars
Sadako and the Thousand Paper Cranes
Eleanor Coerr
Letters from Rifka
Karen Hesse
The Lost Flower Children
Janet Taylor Lisle
Last Summer with Maizon
Jacqueline Woodson 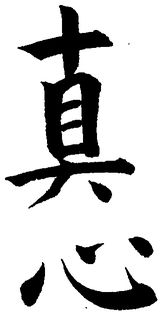 In the midst of the world's corruption, A heart of pure white jade. 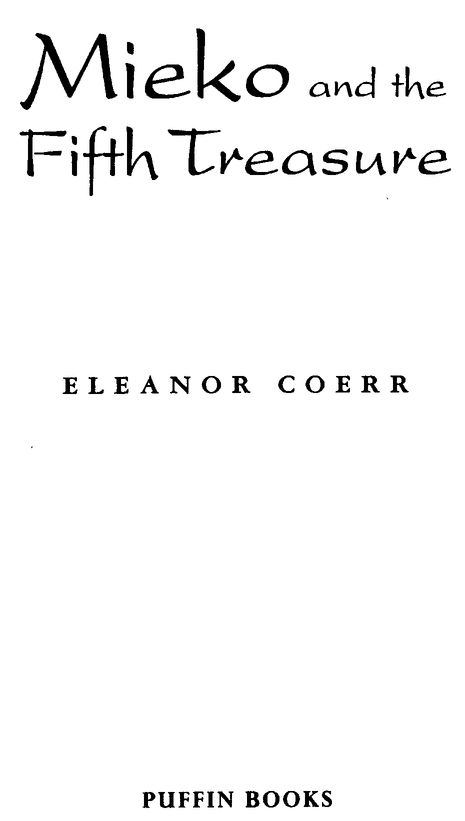 “Mieko, come down to breakfast!” Grandma's cheery voice floated up from the kitchen. “It's time you got out of bed.”
But Mieko was not in bed. She was sitting very still and feeling very sorry for herself.
“In a minute,” she called back.
Mieko stared at the art supplies lined up on the red lacquer chest. Her art teacher, Mr. Araki, had called them “the four treasures. ” There was a fine sable brush, an inkstick, an inkstone shaped like a lily pond, and a roll of rice paper. Mieko had used them to paint Japanese word-pictures. Calligraphy was what she liked to do more than anything else in the world.
Mr. Araki had also told her, “Mieko, you are one of the lucky few who are born with the fifth treasureâbeauty in the heart. When you paint, that beauty flows from your heart to your hand, to the brush, and out onto the paper. With lots of practice, you will surely become a great artist.”
Mieko didn't really understand what beauty in the heart meant, but she knew that she was never so happy as when she had a brush in her hand, with every stroke getting better.
Mieko sighed. She thought about how wonderful it had been to sit alone in her room and paint. She used to weave brushstrokes, curves, and dots into word-pictures that seemed to have a life of their own. Her two black strokes for “man” looked like two legs striding across the fields. She could almost hear the raindrops in her word-picture for “rain. ” When she painted, she was in a magical world.
But everything was different now.
She would never forget the day when The Thunderboltâthe atom bombâwas dropped on Nagasaki, sending shock waves out to her town. It was like the end of the world. Windows shattered and roof tiles flew through the air. Mieko was knocked to the ground. When she had put up an arm to shield her face, a jagged piece of glass had torn into her hand, ripping a deep gash from her fingers to the wrist. Blood was everywhere. Now, two weeks later, the wound still throbbed painfully underneath the bandage.
“Nothing serious,” Father had said in his soothing doctor's voice. “Your hand will heal quickly and you will soon be painting again.”
Mieko did not believe him. The wound looked awful. And her hand was useless. Besides, she had seen many around her with worse injuries, and Father had told them “nothing serious,” too. He said that to make his patients feel better.
And now she had been shipped to Grandpa's farm.
“Just for a few months, Mieko,” Mother had explained, forcing a smile. “We must remain here to take care of the injured. Besides, the fresh air and farm food will be good for you.”
Mieko wanted to stay home. She was bitter about leaving her parents. She was bitter about leaving her friends. She was frightened about going to a new school. And she hated the horrible bomb that had ruined everything.
“With all the bitterness and hate inside of me,” she thought, “there isn't room for any beauty. ” The fifth treasure was gone.
“Breakfast is waiting, Mieko!” Grandma called again.
Mieko gave a quick brush to her bangs and went downstairs.
She sat at the low table and tried to pick up her chopsticks. When they fell with a clatter, Grandma picked them up and fed Mieko as though she were a little baby. Her plump face wreathed in smiles, Grandma poked food into Mieko's mouth, then carefully wiped her chin.
“Good food cures everything,” Grandma said.
Mieko did not mind the attention, especially when she felt so sorry for herself.
“My!” Grandma gave Mieko's arm a little pinch. “You are as thin as a young bamboo. We saved this special white rice for an important occasion like having you here with us. You must eat every grain.”
Mieko remembered that Mother always called it “silver rice. ” She felt a wave of homesickness. Tears stung her eyes and she could hardly swallow.
Grandma put her arms around Mieko and rocked her back and forth. “Hush, hush!” she crooned. “You are just tired from that long train ride yesterday. ”