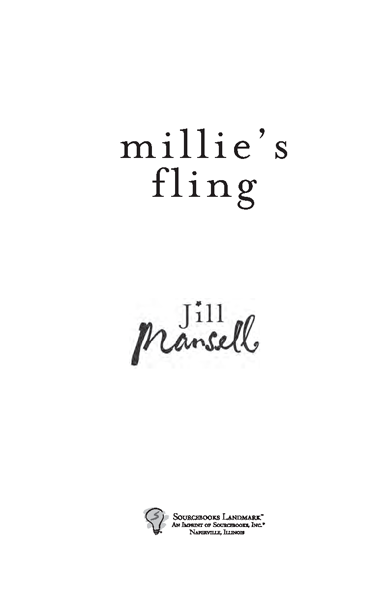 For Lydia and Cory
,
despite the fact that they are sick and tired
of having books dedicated to them.
Bad luck, here's another one.

THE VIEW FROM WHERE they were sitting was spectacular, but Millie Brady couldn’t help wondering why Neil had driven her up here today to Tresanter Point. He wasn’t normally the scenery-admiring type.

Next to her, in the driver's seat of his lovingly restored emerald green MG, Neil cleared his throat.

‘Right, well, I’ve had a bit of a think about this, and we’ve been together for quite a while now.’ Clasping her hand suddenly in his, Neil began to stroke it as if it were a nervous puppy.

All of a sudden Millie began to have an inkling as to what this might actually be about. Oh blimey, oh heavens, surely not… surely he wasn’t gearing himself up to ask her to marry him…

‘Not that long,’ she put in hastily, ‘not really. Only three months.’

‘Still, we get on well, don’t we? And the landlord's been dead funny about renewing the lease on our place. I think he wants us out of there.’

Since this was the flat Neil shared with four of his friends, Millie wasn’t a bit surprised. The place was an indescribable pit.

‘So what I thought was, what with the two of us being pretty much an item these days—Millie, hello, are you listening to me?’

‘Mm? Oh, sorry.’ Millie forced herself to pay attention; she had been distracted for a moment by the arrival at the cliff-top beauty spot of a gleaming burnt orange Mercedes. As it had screeched to a halt, Millie couldn’t help noticing that the driver—a woman in dark glasses—had long, riotously curly hair the exact same shade of burnt orange as her car.

She was smoking a cigarette at a rate of knots. And not looking at all happy, Millie observed as the woman removed her dark glasses and began arranging a row of white rectangles along the dashboard, as if she were dealing out playing cards.

Pay attention now. Come on, concentrate. Millie gave herself an admonitory mental shake. If someone's asking you to marry them the very least you can do is listen; it's only polite.

‘Okay, so how about if you jack in your place and we get somewhere of our own?’

Neil gazed at her in triumph, his hideous ordeal over. There, he’d done it. Said what he’d come here to say. Now all Millie had to do was swoon with happiness and say yes.

So he wasn’t asking her to marry him, Millie realized with a rush of relief. There wasn’t going to be any of that romantic down-on-one-knee business, followed by the production of a little velvet jeweler's box containing an engagement ring. No church, no honeymoon, no solemn vows, none of that sloppy malarkey, oh no. Neil was plumping for the cheaper, more down-to-earth option, basically because he was about to be evicted from his current abode and because he’d rather stick red-hot pins in his eyes than iron a shirt or have to do a spot of washing-up.

I’m only twenty-five. There has to be more to life.

Anyway, what
were
those white rectangles on the dashboard of the Mercedes? And shouldn’t the woman with the chestnut hair— now out of the car—take a bit more care where she was going? The way she was wandering so close to the edge of the cliff was downright reckless, Millie tut-tutted; didn’t she realize that if she slipped and fell on to the rocks two hundred feet below she could be
killed
?

‘You’re not saying anything,’ Neil complained. ‘I thought you’d be over the moon. No more having to share that poky little house with Hester—’

‘It's not a poky little house,’ Millie replied absently. ‘And I like sharing with Hester.’

‘But we’d be living together. That means I’m serious about you. We’d be, like, a proper
couple
.’

The wind was blowing the woman's red-gold curls around her face but when she put up a hand to sweep her hair out of her eyes,
Millie saw that she was crying. She also thought there was something familiar about the woman, but from this distance it was impossible to be sure.

Except something wasn’t quite right here. The woman was still pacing up and down, smoking furiously, and pausing every now and again to peer over the edge of the cliff. Normally at a beauty spot you sat back on one of the benches thoughtfully supplied for the purpose and admired the stupendous view. This woman, Millie couldn’t help thinking, was acting more like an Olympic high-jumper psyching herself up to make her third and final attempt at the world record…

‘Okay, fine, if you don’t
want
us to live together, that's up to you,’ snapped Neil, abruptly letting her hand drop. ‘Any normal girl would’ve been thrilled, but not you, oh no, I might have guessed you’d have to play hard to get. I mean, what d’you expect me to do? Beg?’

Oh good grief, she
was
psyching herself up to jump.

Only not upwards, Millie thought with a surge of horror. Belatedly she remembered that Tresanter Point wasn’t just a renowned beauty spot. It also had something of a reputation as a lover's leap.

A haunt for would-be suicides.

This woman was planning on jumping
down
.

Millie was already out of the car, pelting hell for leather across the rough grass. The woman was currently standing with her back to her, engrossed in trying to light a second cigarette from the butt of the first. Her long indigo cotton dress flapped wildly around her legs, which were pale and bare. Her long copper hair, whipped by the brisk breeze, streamed behind her like a banner.

Screeching to a halt next to the Mercedes, Millie saw that she had been right. The white rectangles propped up on the dashboard were indeed envelopes, each one bearing a different name.

Either the woman was sending out invitations to a party or they were suicide notes.

Startled, the woman at the edge of the cliff twisted round. So did Millie.

‘What the hell do you think you’re doing?’ Neil yelled bad-temperedly at her from the MG.

Millie said the first words that sprang into her head. As Neil thumped the MG's steering wheel in exasperation, she turned her back on him and for the first time came face to face with the woman who was about to End It All.

Some instinct told Millie that if she stopped to wonder exactly
what
she should say, and whether whatever she was saying was right or wrong, she’d end up completely tongue-tied and too scared to say anything at all.

The only way to go, therefore, was to plunge right in.

‘Well?’ Millie gazed steadily into the other woman's puffy, sea green eyes. ‘Have you?’

The puffy sea green eyes surveyed her as if she were mad.

‘Of course I’ve got a light.’ The woman inhaled irritably on her Marlboro and blew out a stream of smoke that was whipped into oblivion by the wind.

‘So? Could I have a light?’ Millie persisted.

‘You could. But you don’t appear to have a cigarette.’

‘You have, though. Okay, so could I have a light
and
a cigarette?’ Millie didn’t dare wonder if she was sounding as completely ridiculous as she suspected she did.

The other woman sighed and flicked the Marlboro casually over the edge of the cliff. It sailed through the air, executing lazy somersaults as it went. Millie imagined a body doing likewise before crashing hideously on to the black, wave-lashed rocks below.

Oh help, she felt sick just thinking about it.

‘Look, I know what you’re trying to do here,’ the woman sighed, ‘and I appreciate the gesture, darling, really I do, but there's absolutely
no need.’ As she spoke, her green eyes filled with fresh tears. Her trembling fingers scrabbled with the flip-top lid of the Marlboro packet, and as she clumsily extracted another cigarette, the rest slithered out, bouncing to the ground around her feet like spillikins.

Millie helped her pick them up. The puffy eyelids and lack of make-up had effectively disguised the woman at first, but she recognized her now. Masses of red-gold hair, greeny-gold eyes, the Cartier watch, and that distinctive breathy voice… She was Orla Hart, one of the country's best-selling novelists. Now in her late thirties, she had been successfully churning out popular fiction of the glitzy kind for the last fifteen years, and earning herself a fortune in the process.

Collared For Murder by Annie Knox
Alice After Hours by Galia Ryan
McLevy by James McLevy
The Girl & the Machine by Beth Revis
My Year Off by Robert McCrum
GAMBLING ON LOVE (Travis Series) by Kimberley Reeves
When Gravity Fails by George Alec Effinger
Titan (GAIA) by Varley, John
1917 Eagles Fall by Griff Hosker
Bayne by Buckley, Misa