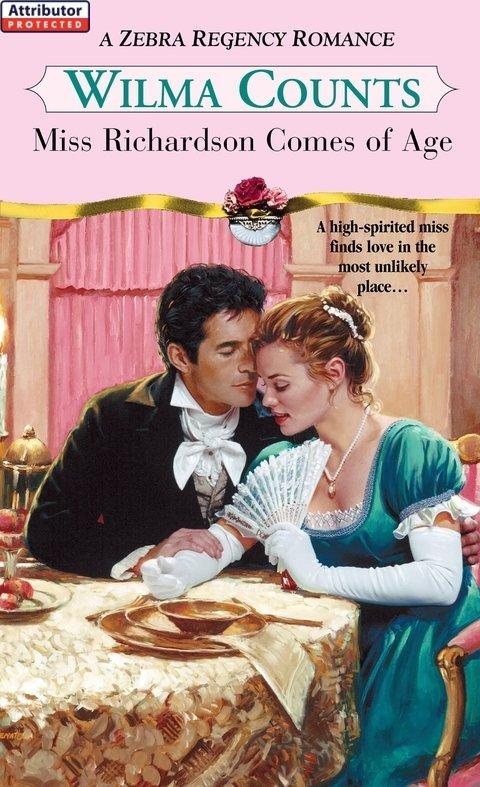 A REQUEST TO DANCE
Annabelle noticed Thorne’s body swaying to the strains of the waltz emanating from the ballroom. She felt herself caught up in the music, too. She stood and extended her hand.
“Come. Dance with me, Thorne.”
“Annabelle . . .”
“Miss Rhys said you once danced beautifully.”
“That was before—”
“I know. But you cannot have forgotten how to waltz. No one will see if you stumble and I promise not to tell a soul.”
He shook his head, but he stood reluctantly, leaned his stick against the bench, and opened his arms.
“Do you
always
get your own way?” he murmured.
“Nearly always.” She laughed nervously and knew the instant he touched her that she had gone too far. This had been a mistake—if only because it felt so wonderful and so absolutely right....
Books by Wilma Counts
WILLED TO WED
MY LADY GOVERNESS
THE WILLFUL MISS WINTHROP
THE WAGERED WIFE
THE TROUBLE WITH HARRIET
MISS RICHARDSON COMES OF AGE
Published by Zebra Books
MISS RICHARDSON COMES OF AGE
Wilma Counts

Mind the Gap by Christopher Golden
Soldier of Rome: Journey to Judea (The Artorian Chronicles) by James Mace
Diamond Girls by Wilson, Jacqueline
Hold Me Never (Holding Never) by Natalie Kristen
The Case of the Invisible Dog by Diane Stingley
Opal by Lauraine Snelling
Sweet Revenge (Dueling with the Devil) by Vivi Dumas
The Mistborn Trilogy by Brandon Sanderson
Alaric's Bow: A Book of the Amari by Collins, KateMarie
A Sticky Situation by Kiki Swinson