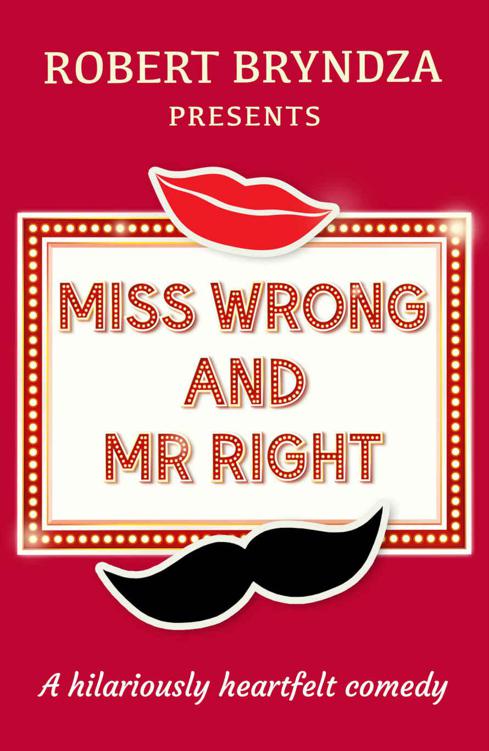 All rights reserved in all media. No part of this book may be reproduced or transmitted in any form by any means, electronic or mechanical (including but not limited to: the internet, photocopying, recoding or by any information storage and retrieval system), without prior permission in writing from the author and/or publisher.

The moral right of Robert Bryndza as the author of the work has been asserted by him in accordance with the Copyright Designs and Patents Act 1988.

This ebook is a work of fiction. Names, characters, places, and incidents either are the product of the authors imagination or are used fictitiously. Any resemblance to actual persons, living or dead, is entirely co-incidental.

Thanks to Araminta Whitley, Peta Nightingale, Jennifer Hunt and all at LAW. Thanks also to Stephanie Dagg and to Emma Gillett. To Ján – as ever, your advice, encouragement and support every step of the way are what keep me writing – and big hugs to Vierka, Ricky and Lola.

The biggest thanks go to all my amazing readers who give me so much love and encouragement. Word of mouth is an incredible thing. Thank you for telling people about my books.

This book is dedicated to all the people who dare to dream, and have the courage to make their dreams a reality.

I stood in the field behind the farmhouse on that summer afternoon, the afternoon of my wedding day, with my Mum, my Gran, and my best friend Sharon. It was almost two o’clock.

My wedding invitations stated that at two the reception would begin. I should have been sitting at the top table with my gorgeous new husband Jamie, listening to my Dad make the speech he’d stressed over for the past few weeks. Instead, I was peering into an old oil drum, and watching with morbid curiosity as the satin and lace of my dress puckered and curled, appearing for a moment like caramel, before crinkling, singeing, and then igniting with a whoomph.

The flames shot up high, and our view of the hills beyond rippled and distorted in the heat.

‘Natalie…What are you doing? This is madness!’ cried my Mum.

‘I didn’t even get a photo of you in it,’ said Sharon sadly, her camera hanging off her wrist. She was still wearing her peach-coloured bridesmaid dress.

‘It vas just a dress Natalie, and it made you look like a cream cake,’ said Gran lighting a cigarette. She snapped her gold lighter shut and stuffed it back in her fur coat. My Gran, Anouska, is Hungarian. She came to England as a young girl but has stubbornly held on to her accent.

‘I don’t know how you can say that. She looked beautiful!’ said Mum.

‘She did look beautiful, like a beautiful cream cake, offered up to be gobbled down,’ said Gran. ‘Is that how she vanted to begin her life as a married vooman, as a sugary insignificant object?’

‘Do you know how long it took old Mrs Garret to sew all that lace?’ asked Mum. ‘It cost a fortune! If I’d got here five minutes earlier, I’d never have let you do this.’

The breeze changed direction, blowing a toxic plume of smoke at us. We coughed and flapped for a moment.

‘Natalie didn’t vant to get married!’ snapped Gran. ‘And I paid for the dress…’

‘It doesn’t mean you can burn it. I would have liked to have kept it,’ said Mum.

‘Yes, only to remind the poor girl you think she should hev gone through vith it,’ said Gran. There was a fizzing popping noise as the flames worked their way down to the fake pearls on the bodice. I didn’t say anything; I was still numb with shock. Mum went on.

‘What were you thinking, Natalie? You walked down the aisle on your father’s arm, in front of half the village, and two minutes later you run back up it and out of the church.’

‘I thought you had a tummy upset, Nat,’ said Sharon.

‘How will I show my face in the village? And poor Jamie! That handsome lovely boy,’ cried Mum.

‘Annie, put things in perspective,’ said Gran, flicking the butt of her cigarette into the oil drum. ‘Didn’t I say Natalie vas too young to get married? She’s nineteen. She needs to get out into the vorld…’ She squinted at me against the sun. ‘You’ve got your whole life ahead of you my darlink. You need to try out some different men for size.’

‘She’s not trying any men out for size,’ hissed Mum. ‘She needs to…’

‘What about what I want to do?’ I shouted suddenly. ‘You’re all talking about me as if I’m not here! Can’t you ever be a normal family, and try to understand how I feel? All you’ve done is shout and persuade me to set fire to my dress!’

‘If you didn’t vant me to burn the dress, you should hev opened your mouth, Natalie,’ said Gran.

‘Like the poor girl had a choice. Once you’ve got a bee in your bonnet there’s no stopping you!’ countered Mum. There was an awkward silence. Sharon leant over and grabbed my hand.

My Dad approached us, picking his way across the muddy field. He still had on his morning suit and smart shoes. When he reached us, he peered into the oil drum in disbelief. My dress was now a blackened lump.

‘Martin, I thought you were going to get changed?’ She slapped at his lapels, brushing imaginary dirt off his suit.

‘I’ve been trying to sort out what to do with my parents,’ he said, fending her off. ‘I dropped them at the Travelodge, they want to know if we’re still having the sit down meal at the pub?’

‘Of course we’re not still having the sit down meal at the pub!’

‘I’m trying to get my head around this, Natalie, did Jamie do something?’ asked Dad. They all turned to look at me. I opened my mouth. Nothing came out for a few seconds.

It sounded whiny and pathetic.

‘When would you feel ready?’ shrilled Mum. ‘Tomorrow? Next week? It would have been nice to know when we were booking the bloody wedding!’

‘With what?’ asked Mum. ‘Money from the DSS? You’ve got no job. You failed all your exams because you were so in love with Jamie. Do you have any idea what you’ve done?’

‘Of course I know what I’ve done!’ I shouted. ‘You think I did it just to spite you?’

‘I wouldn’t put anything past you right now!’ roared Mum. ‘I can’t look at you.’

‘You need to calm down, Annie,’ said Dad putting a hand on my mother’s shoulder.

‘Don’t you dare tell me to calm down,’ said Mum shaking him off.

‘She vas always highly strung as a child,’ said Gran watching my mother impassively. ‘Some mornings I’d sprinkle a little of my Valium in her Ready Brek, just for some peace and quiet…’

Mum pulled away from Dad and marched off back towards the farmhouse.

‘I’m sorry I never got to hear your speech, Dad,’ I said.

He took one look at the charred dress, shook his head, and followed. Tears began to stream silently down my face. Gran pulled a lace hanky from her handbag and handed it to me.

‘Do you vant a moment, Natalie?’ she asked. I took the hanky, pressed it to my face and nodded.

Sharon smiled and squeezed my hand. They followed after Mum and Dad, who were halfway across the field to the farmhouse in the distance. I grabbed a stick and poked at the now blackened lump in the oil drum. The tip of the stick caught, and as I pulled it away a string of melted material came too.

After running out of St Bathsheba’s church, I had found myself on a deserted country lane. The local bus had stopped, probably because they didn’t often see a bride in her wedding dress and veil, waving madly from the pavement. I didn’t have any money, so had to exchange my bouquet for a ticket (the driver was off to see a sick aunt when his shift ended, and needed some flowers to take to the hospital). As brides, we’re told it’s so important to have something old, something new, something borrowed, something blue… but what about a bit of cash – if we don’t go through with it?

When I walked into the kitchen, Mum was making a very angry cup of tea, furiously spooning leaves into the pot. Dad had changed out of his suit and was at the table with Sharon and Gran. They were sitting in silence, looking up at the three elaborate tiers of my wedding cake, which had been placed in the middle.

‘The lady from the pub just brought it over,’ said Sharon apologetically. I stared for a moment at the flawless royal icing, topped with a crown of delicate yellow sugar roses. Mum came up to me and held out a long knife.

‘Yes, it’ll have to be frozen. We won’t get through it all,’ said Mum.

‘Annie, she doesn’t have to do it right now,’ said Dad.

‘Well, when, Martin? She was happy to let her Gran chuck her wedding dress on the bonfire! When is an appropriate time to…?’ Mum was cut off by a knock at the back door. Through the frosted glass was a peach-coloured blur.

‘Micky! We forgot about Micky!’ cried Mum, running to the door and opening it. My fourteen-year-old sister Micky was standing outside in her bridesmaid dress. She had a pair of white shoes in her hand, having taken them off to wade through the mud up the driveway.

‘Micky, where did you go?’ asked Mum. She put down some newspaper by the door and Micky hopped onto it.

‘And she tells me I vas a bad mother,’ muttered Gran lighting another cigarette.

‘I had a wander through the graveyards, and then got a lift with the man who digs the graves. He had spades in his boot!’ said Micky excitedly.

‘Oh will you shut up!’ said Mum. She went to the sink, filled a bowl with warm water and set it down by the door. We watched Micky as she washed her feet.

‘What’s going on Nat?’ asked Micky looking up at me. ‘I thought you and Jamie were in love?’

There was a silence. I jumped as the phone rang. Dad went and answered then came back.

‘He’s at the end of the drive, on his mobile phone. He says he won’t leave until you talk to him,’ explained Dad.

‘That poor lad, you at least owe him the decency of an explanation,’ said Mum.

To Love a Horseguard by Sheffield, Killarney
The Fair & Foul (Project Gene Assist Book 1) by Potts, Allie
Playing with Fire by Peter Robinson
Plastic by Susan Freinkel
Big Red Tiquila - Rick Riordan by Rick Riordan
Vampire Lodge by Edward Lee
Within My Heart by Tamera Alexander
The Consequence He Must Claim by Dani Collins
Cyndi Lauper: A Memoir by Lauper, Cyndi
Friends: A Love Story by Angela Bassett