Read Monster High 4: Back and Deader Than Ever Online

Monster High 4: Back and Deader Than Ever 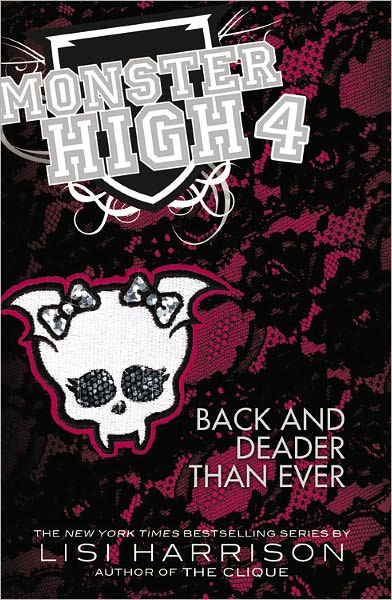 For Hallie Jones, the ghost-est with the most-est.

A special
merci beaucoup
to Ingrid Vallon, a wonderful friend and
française
proofreader.

J’adore.
(Ingrid, did I spell all that properly?)

The invisible charmer had a girlfriend. She was spirited
and smelled like lilacs. She loved listening to live bands and reporting “the latest” to gossip-starved students. She held hands with him. She tittered at his jokes. Things were getting serious.

It was time for Billy to wear clothes.

“Prepare to go from zero to hero,” Frankie said, holding open the door to Abercrombie & Fitch.

“There’s an itch in Fitch, and we’re gonna scratch it,” Billy added, grinning with anticipation as he stepped into the air-conditioned store. The holiday season had just ended, and thus everything was on sale. High prices were no longer an excuse for nudity. He was ready to zip up, button up, and show up.

“Look,” said Frankie, pointing at their reflection in the wood-framed mirror. A green girl with white-streaked black hair, plaid tights, and a denim minidress was standing beside a floating pair of sunglasses and tattered Timberlands. The duo burst out laughing.

In a romantic comedy, this would be a pivotal scene. While watching it, the audience would decide that Billy should be with Frankie instead of the lilac-scented girl. The moviegoers would have seen how they laughed on the train from Salem to Portland. Heard strangers refer to them as a perfect couple. Marveled at how uninhibited they were with each other. And everyone in that audience would long for the person seated beside him or her to be just as dynamic.

But this wasn’t a movie. It was real life. And for once, Billy Phaedin’s story was more magical than Hollywood.

They sifted through the racks, blissfully unaware of other shoppers and their puzzled glances. Afloat in a bubble of inside jokes and laughter, they hardly noticed a mother pulling her tween daughter closer to her hip.

“Welcome,” said a California blond in a ruffled black dress and a bright blue hoodie. She turned to peek at her coworker by the cash register, as if executing a dare. “Can I help you find your size?” And then a little louder, “And your body?”

The girl at the register smacked the counter in disbelief and cracked up. Billy clenched his fists. Frankie had warned him about this. It had taken weeks of shopping in Salem before the salespeople began treating her like a normie. Now she was a VIP. But Voltage Important Person status wasn’t granted after a single spree. It took time and trust. And they were in Portland now, breaking into a new market. So Billy bit his lip and let Frankie do the talking.

“We’d love the help,” she said, twisting her hair into a knot.
How do girls do that?
Billy wondered. Her bolts gleamed unapologetically. “My friend needs a wardrobe.”

“You’re not from around here, are you?” asked the girl with a know-it-all squint.

“Thought so. I heard about you guys,” she said, eyeing Frankie’s bolts. She reached for them. “Are those—?”

“No prob.” Frankie smiled. “You hook Billy up with some mint clothes, and I’ll send you a pair of stick-ons from my father’s lab. I do it for all my mall friends back home.”

“Epic. Well, I’m Autumn. And if you guys want to have a seat in our dressing lounge, I’ll start pulling some looks.”

Frankie led the way and Billy followed. Not the way he used to, galumphing like a sad puppy because she was crushing on Brett Redding instead of him. On this day he was more like a proud pony, trotting joyfully because he was the exception to the Hollywood rule. He could have a megawatt-hot best friend and no longer have to fight the urge to kiss her. She could even have a cool normie boyfriend he didn’t want to choke. He was that stable.

Ever since he met Spectra—two months earlier at Clawdeen’s Sassy Sixteen party—the only thing Billy had felt for Frankie and Brett was happiness. He no longer felt invisible. Spectra and her playful sense of humor, girlie giggle, and just-because kisses brought color and definition to his world in a way that spray tans never could.

They settled into the brown leather couch outside the fitting rooms and helped themselves to the complimentary A&F water.

“Spectra’s been begging me to get visible,” Billy said, dropping his sunglasses into Frankie’s purse. “She’s gonna freak.”

Frankie took a small sip and then screwed the top back onto her bottle. “She’ll probably tell everyone you were just given a full wardrobe as the new spokesmodel for the store.”

Billy sighed.
Here we go again.
“Spec may cut corners when it comes to fact-checking, but she’s not a liar.”

There was a time when Billy would have hoped Frankie was speaking out of jealousy. But he knew better. Frankie might be green on the outside, but inside she was pure gold—except when it came to Spectra’s “stories.” Those made her see red.

Billy stiffened. “A what?”

Frankie paused to consider her words. “A verbal free spirit.”

“Maybe because she
is
a spirit,” he tried.

“I’m talking about her rumors,” Frankie insisted. “Half the time it’s like she’s just making stuff up.” And then she added, “I’m sorry,” as she always did. “I just don’t want you to get hurt.”

“I won’t,” Billy assured her. “Spectra may fill in the blanks sometimes, but she’s not mean.”

“She could spread a fake rumor about you or—”

A Bieber-haired boy stepped out of the fitting room holding a striped V-neck. He paused to watch Frankie, who appeared to be talking to herself.

“What are you looking at?” Billy asked in his deepest voice. “Never seen a green ventriloquist before?”

“Uh…” The boy scanned the lounge as if looking for hidden cameras. When he didn’t find any, he stiffened—and
then grinned. He took a step closer and lifted his palm. “Right awn.”

Billy thrust his own palm forward and smacked the guy like a long-lost brother. The unexpected force launched Bieber Boy straight into a clothing rack. Hangers swayed wildly above his limp body.

Frankie raced toward him. “Omigod, are you okay? It was an accident. Usually people run away. We’re not used to—”

“I’m cool,” he grunted, and then wobbled to his feet with the grace of a colossal pregnant woman. “Can I take your picture?”

He didn’t seem to mind that one of his subjects was invisible. There was something about the way Frankie’s arm seemed to hover in midair that thrilled him into a dozen thank-yous.

“Things are really different now,” Billy said once they were alone again. The RADs’ growing acceptance was starting to spread beyond Salem.

Frankie twirled a loose wrist seam around her finger. “It’s hard to believe Clawdeen’s party turned everything around.”

“Losing your head at the school dance kind of got the ball rolling, don’tcha think?”

Frankie giggled at the memory. “We’re not freaks anymore.”

Frankie shot him a look.

He smiled. “I have to find new material.”

“Epic. I’ll just put this stuff in a room and—”

“S’okay,” Billy said, grabbing half the stack and placing it beside him on the couch. “I can change out here. It’s not like anyone can see anything, right?”

Frankie jumped to her feet and clapped. “Fashion show!”

For the next hour, Billy allowed himself to be dressed and undressed by two gorgeous girls who wanted nothing more than to make him as cute as visibly possible. He was out in public owning his RADness, mere hours away from a night of lilac-scented hugs.

And the invisible boy lived happily ever after….

“Just promise me you won’t change,” Frankie said as they rode the train home, cocooned in a nest of black-and-white bags.

“I promise,” he said, but it was too late. He already had.

Frankie triple-checked the date on her iPhone to make
sure she wasn’t hallucinating. It still read
June 1
. Yellow sparks sprayed from her fingertips, raining down around the crowded bleachers in the school gym. They settled by her black-and-white-striped Mary Janes and then winked out like fireflies. After this day, there would be twenty-three days of school left! Twenty-four days until the first day of summer vacation! Twenty-four days until twenty-four-seven VOLTAGE!

Amid the mounting sounds of chattering students jockeying for seats, the normie boy beside her placed a warm hand on her shoulder.
You okay?
his denim-blue eyes seemed to ask.

Frankie smile-nodded and then returned to the screen. After six months of PDA (public displays of anxiety), Brett Redding still noticed her every flicker. If she sparked during a test, he’d lift his gaze and wink reassuringly. If she sparked when a teacher called on her, he’d place a hand on her back. When she sparked during a scary movie, however, he’d laugh. But Merston High’s
other students? They had stopped marveling at her quirks months earlier. The shock of seeing Frankenstein’s granddaughter snap, crackle, and pop was
soooo
last November.