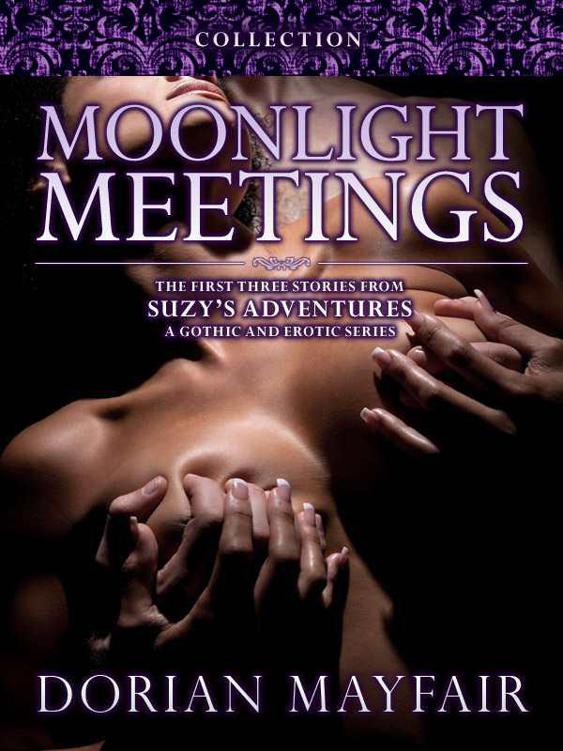 The First Three Stories in the Suzy’s Adventures Series

This eBook is licensed for your personal enjoyment only. This eBook may not be resold or given away to other people. If you would like to share this book with another person (barring lending it to her or him), please purchase an additional copy for each person. If you are reading this eBook and did not purchase it, or it was not purchased for your use only, then please return it to Amazon.com and purchase your own copy. Thank you, kind reader, for respecting the hard work of this author!

This eBook uses some actual locations and family names, however all events are fictionalized and all persons appearing in this work are fictitious. Any resemblance to real people, living, dead or generally mysterious but gorgeous, is entirely coincidental.

The First Three Stories in the Suzy’s Adventures Series

Suzy leaned out of the taxi and spread her fingers wide, trailing the humid summer air with her hand and breathing in the unfamiliar scents. Sleep had claimed her just as the New York’s glittering mass of lights had vanished under a blanket of gray clouds, then she’d been jolted awake three hours later when the airplane touched down. Now she felt half-asleep, as if part of her consciousness had been left behind, a thousand miles and many more memories away. But she welcomed the sensation; she allowed it to linger as she watched the city pass by, her drowsiness blurring lights, sounds and smells into a vivid neon haze. Sweat tricked down her back and made her leather trousers stick to the seat, but she was too busy taking in the sights to be annoyed.

The driver said something over her shoulder and glanced at Suzy, who blinked and shook herself.

“The hotel, what was the name again? The Courtroom?” the driver asked, her eyes returning to the busy street.

If you don’t know,
Suzy thought,
where the hell have you been going for the past twenty minutes?
“The Courtyard,” she said. “And it’s not really a hotel, more of a bed and breakfast. I’ve got the address somewhere,” she added and started to get out her battered notebook.

“That’s fine, I know the place,” the driver said. “Like a small mansion, just outside the French Quarters, right?”

The driver nodded, black curls bobbing behind the plastic safety screen. “We’ll be there in no time,” she said.

There was a short silence.

“Ever been to New Orleans before, girl?” the driver asked.

“Nope,” said Suzy. “Been wanting to come here all my life, but work and other stuff got in the way. Then I thought it was time for a break, so I finally got around to buying the ticket.”

“What are you planning on doing then?”

Suzy shrugged. “Go downtown, check out some clubs, see what they’re like.”

The driver nodded. “So you’ll be staying a while?” she asked.

“Just one night,” Suzy answered. “Then I’m off to LA, then to Puerto Rico.”

“Puerto Rico, eh?” the driver said and pursed her lips. “That’s some trip.”

There was a brief silence again. A small frown chased the smile from the driver’s face. “I could make do with one of those breaks myself, I tell you,” the woman said.  “Go somewhere else for a change, see something new. Thing is, this city just won’t let go of me. Them roots go too deep, you see. This place is, you know. Special.”

Suzy smiled at the rearview mirror. Compared to the New York taxi drivers, always seemingly on the edge of a nervous breakdown, there was something vaguely motherly and about this relaxed woman. “Special in what way?” she asked.

The driver was silent while she waited for the lights at a large crossing to change. Everyone on the busy sidewalks were walking at a slow, tranquil speed. No one seemed to be in a hurry. Stray fragments of a slow blues drifted from a dim but crowded bar on a corner, the wailing guitar mingling with harsh laughter and cicadas. Brooklyn couldn’t have felt more distant.

“New Orleans gets to know you,” the driver said finally. “It learns about you, what you need, and then dangles it in front you, like a promise. Just out of reach, just around the corner, all the time.”

Suzy gave the driver a fleeting look, wondering if she’d touched on something personal, but the car stopped before she could find out.

“Here we are,” the driver said. “Need a hand with that bag?”

Suzy opened her mouth, then closed it and shook her head. Money changed hands and Suzy stepped out on the sidewalk, shut the yellow door behind her, and turned to The Courtyard.

The building really looked like a miniature mansion, rising out of the lush, surrounding gardens like a brooding remnant of a past era – which, Suzy thought, probably was exactly what it was. Ten tall windows faced the street on each of its three floors, but most of them were dark; only the ground floor was fully lit, while a few lights shone between heavy curtains on the second floor.

Suzy craned her neck and admired the ornaments that lined the windows and ran along the edges of the roof; small statues of cherubs, dragons, angels and other shapes she could not make out in the darkness, all backlit by the flickering, yellowish glare of a enormous billboard somewhere behind the building. The entrance, a pair of massive oaken double doors, looked oddly small on the gray brick façade. They were closed, but there was a painted sign above them, as well as a stand with tourist brochures on the sidewalk just outside. While the building looked a bit ominous for a hostel, the scents that floated on the hot air from the gardens were rich and alluring; whiffs of jasmine and lilies, the aroma of daffodils and dahlias, all blending and mingling in the heat. Suzy imagined herself pulled in by the smells like a bee drawn to a flower. She hung her backpack over one shoulder, turned back to the taxi and found that the driver still was watching her.

“Got all your luggage?” the driver asked.

Suzy nodded. “Sure, it’s just this bag,” she said.

The woman offered Suzy a small nod. “Listen,” she said, “don’t mind what I just said about the city, right? Just an old woman’s babble. Have fun now, and take care.”

Suzy nodded and the taxi sped away, its tail lights soon blending with the bright lights of countless restaurants and bars. A heavy, thudding base from a club somewhere made the ground shudder faintly, like a deep heartbeat just under the streets.

This city gets to know you, what you need.

Suzy decided that what she needed was dinner, then some seriously strong coffee to shake off the sleepiness. And a shower, too; the heat made her clothes cling to her body. After that, she would venture out to see what the nightlife of the south had to offer.

She rubbed her face with her hands and headed for the entrance.

The door swung inwards and opened to a large, dimly lit oval hall much cooler than the sweltering evening air outside. Suzy paused in the opening and looked around.

Paintings of men and women in uniforms and dresses lined dark, paneled walls, their faces indistinguishable in the weak light from a massive chandelier that hung in the center of the room. Suzy was half-surprised to see lights bulbs; most of the interior seemed to have been preserved from centuries ago, creating the atmosphere of a closed museum. There were even old-fashioned weapons on the walls, swords, axes and antique guns, and Suzy couldn’t help but smile when she noticed a full plate armor in desperate need of polishing mounted on a stand on the top of the staircase. Down in the other end of the hall two staircases curved upwards and met in front of a doorway to the next floor. In front of the stairs on the ground floor was a wooden desk, behind which a small woman in her sixties looked up as Suzy entered. The silvery laptop in front of the woman looked distinctly out of place and time.

She checked the dressing on her left lower arm and smiled in approval. Clean and tidy, no sign of blood. Getting a tattoo the same day she took off was probably not the brightest idea she’d had lately, but she took pride in being a solid spur-of-the-moment girl. Life was more fun that way. Besides, the motif was too great to resist: A black dragon twisting along her arm and digging its claws into a nice, Celtic-looking symbol on her wrist, just below the palm. At least, Suzy thought it was Celtic; she was a musician, not an historian. She’d never seen anything like it – but then, she’d never before noticed the tattoo parlor, wedged in between a antique book shop and an Italian restaurant. The guy had been good; the lines were knife-sharp and it bled less than any of her other ink jobs had even done. A sweet addition to the motifs that decorated her back and her shoulders. Hopefully, it wouldn’t bleed in the clubs tonight.

Suzy walked down a worn carpet the color of red wine that crossed the cold stone floor, wondering if she’d made a mistake when she’d made her choice of hostel. The Courtyard hadn’t been the cheapest alternative, but she didn’t want to spend her only night in New Orleans in some dump on the fringe of the city. This place was downtown, so all the entertainment was just around the corner, and she had found several interesting places in a online club guide, especially one with the promising name Shadow Gallery. Still, she’d hoped for some other guests to liven up the visit, but so far the only other person she’d seen in the building was the woman at the desk, beaming at Suzy as she walked up to her.

“Um, hi.” Suzy eased her backpack down on the floor. “I’ve made a reservation for Suzy Peréz. For just one night.”

While the woman looked as old as the building, she seemed to brim with the energy of someone who can’t be bothered with the supposed downsides of aging. She smiled warmly at Suzy and gestured at an elaborate but well-used chair in front of the desk.

“Of course,” she said. “That bag looks mightily heavy, dear. Please have a seat and I’ll get your key in a minute. In the meantime, if you could sign in here,” she added and handed Suzy a paper. Suzy started to fill out the form, but her eyes strayed to the walls.

The woman noticed and raised her eyebrows. “Magnificent, isn’t it?” she asked. “You won’t find another hostel like this anywhere in town, I’ll tell you.”

Probably nowhere else in the entire United States
, Suzy thought. “Yeah,” Suzy said. “I guess it’s pretty unusual. It’s sort of cozy, though,” she added hastily, not wanting to insult the woman. In fact, she found herself warming to the place as she filled out her New York address number. She couldn’t wait to email her friends in New York and tell them she’d stayed in a place that looked like part of the film set for
Bram Stoker’s Dracula
.

Carinae Sector: 01 - Traders' Scourge - Part 1 - Alien Flight by David Buck
The Case of the Vanishing Beauty by Richard S. Prather
The Maiden At Midnight by Kate Harper
Acapulco Nights by K. J. Gillenwater
Leandros by Leandros
Appalachian Dulcimer Traditions by Ralph Lee Smith
Eternal Breath of Darkness by Stauffer, Candice
The Survivors of the Chancellor by Jules Verne
A Small Town in Germany by John le Carre
In the Spinster's Bed by Sally MacKenzie