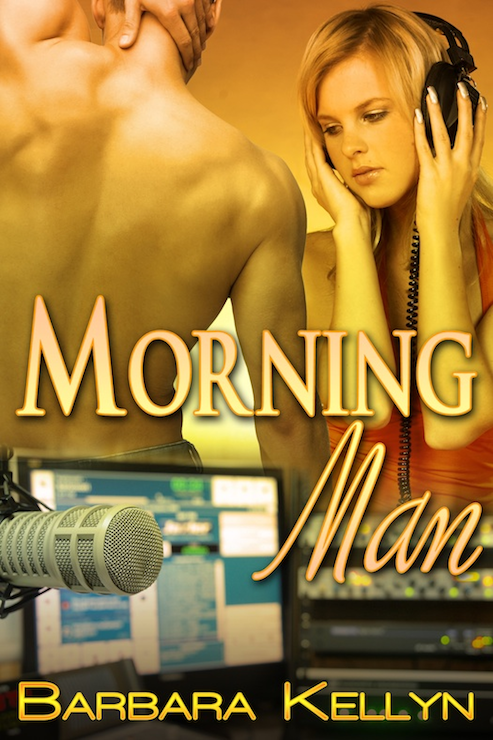 On-air chemistry brought them together, but sexual chemistry keeps them apart.

After draining her savings, moving 300 miles and being dumped on arrival by her boyfriend, Dayna Cook vows to stop falling for the radio jocks she works with. But when her new boss reassigns her to co-host Hot Country 103’s morning show with irresistible Tack Collins, Dayna’s hormones backpedal.

Wake Up with Tack and Dayna
kicks into high gear and so does the duo’s mutual lust. Their boss says sleeping together will kill the sexual tension driving listeners to tune in to their show, and clamps down with a chastity belt of an offer: stay out of bed until the ratings period ends in exchange for a big, fat bonus. For Dayna, it means a sure-fire way to get back on her feet–and back at her ex. For Tack, it means the longest, most frustrating summer of his life.

With a surge of passion, he grabbed her bottom with both hands, pushed her up against the music stacks and branded her with a searing kiss that left them both breathless.

Tack squeezed his eyes shut, knowing he would have to summon superhuman strength to be able to hold back for eight more seconds, let alone the entire eight-week ratings period. It would mean the longest dry spell he’d had in years and he questioned what kind of hold Dayna already had on him to make him even consider such a preposterous arrangement. But then he saw her gazing up at him with those gorgeous long lashes and dark shining eyes, and by the lurch in his chest, he knew he was a goner.

Her face lit up. “I promise, Tack, I’ll make it worth your while after Labor Day.”

Dedicated to Team Awesome, my true loves and light; to Mom, Dad and Sis, who always believed in me and still encourage my stories; and to Peter, for reminding me that being a writer is not a small accomplishment.

Heartfelt thanks to D.C. and P.K. for once again volunteering to be beta readers and loving this story as much as I do. I also thank my lucky stars for being taken under wing by editor Piper Denna, who shares my sense of humor and lends her gift of clarity to make good ideas even better.

Dayna took great comfort in being isolated in a nine-by-twelve closet again. Despite the fugly brown shag carpet covering the walls and the lingering odor of feet, the tight, womb-like surroundings were appropriate given the brand new outlook she’d birthed four days earlier.

“The news has been brought to you by Zippy Lube, reminding you to add life to your vehicle with added savings. Visit your nearest Zippy Lube today and get five dollars off a signature oil change. I’m Dayna Cook. Now back to more continuous country hits with Willie Williams on Hot Country One-oh-three.”

The on-air light switched off as Carrie Underwood began crooning in Dayna’s ears. She slid off her headphones and left the echoless booth to finish the lunch she’d hastily left behind at the news desk.

She smiled. “Thanks. I think it’s going pretty well, too.”

“Can I get an updated weather in the next five minutes? Then I won’t bug you for a bit.”

“No problem, Willie.” Since she’d started working with the veteran announcer two days plus an hour ago, Dayna had caught on to the fact that he still preferred an on-page forecast over reading from the computer next to the board. She snuck another bite of her ham on rye before delivering a rip-and-read report to the studio.

“Aw, thanks, you’re a peach,” Willie said, taking the page from her hand. “Say, what station did you say you came here from?”

He smirked. “Ah, so you’re a rocker chick? You must love this non-stop country.”

“Actually, it’s quickly growing on me. The new stuff is practically crossover pop, only with more references to Jesus and Mama.”

“Yeah, they don’t make ’em like George Jones anymore.” He momentarily turned his focus to the console, nudging the slide control to bring up the opening riff of a Sugarland hit. “So, how’d you end up in Columbus?”

She stared at her feet and shifted uncomfortably. “Oh, it’s just that age-old tale. You know, the one about the stupid girl who leaped before she looked.”

True. She’d picked up her life, crammed it into the back of her ladybug red VW Beetle and made the three-hundred mile trek along I-90 to be with CJ. He had landed a gig doing afternoon drive at Mix 96 and promised that once he got settled in Ohio, she could join him and they would resume where things left off last fall. It had been the plan for the past seven months. It had been the plan two weeks ago when Dayna informed CJ that she’d found a job doing news and the odd weekend shift at a local country station. It had been the plan as she pulled up to his house, got out of the car and bounded up the porch steps. It had been the plan until CJ answered the door.

“I’m here, can you believe it?” She’d wrapped her arms around his wiry frame.

“Yeah, so I see.” He laughed half-heartedly as he gave her a peck on the lips.

She pulled back, alarmed by his obvious lack of enthusiasm. “Aren’t you happy to see me?”

“Don’t be silly, of course I am.” He looked past her shoulder to her car, the back windows jammed tight with suitcases, duffle bags and boxes containing everything she owned. “Wow, you’re loaded for bear, ain’t ya?”

“After eleven years in radio, I’ve finally caught on to the importance of traveling light. No need to lug a piano around the country now, is there?” She took a step back to admire the reddish-brown brick two-story, with white trim and shutters that looked like the piped edges of a gingerbread house. “This place is great. It’s even bigger than I imagined.”

“Aw, it’s nothing special.” CJ shrugged as his hands dug deep into the front pockets of his jeans.

Dayna grew concerned by the uncertainty on his face. “Ceege? What’s wrong?”

“Come on inside. I think we need to talk.”

His unsettling response did very little to appease her worry. The spring-loaded door squeaked open and he ushered her into the living room, steering her toward the sofa covered in a garish flower explosion of oranges and browns and draped with a mint green crocheted afghan.
To grandmother’s house we go
.

“You’re completely freaking me out,” she said, as much about the hideous furnishings as about his demeanor. She perched on the edge of a seat cushion while CJ planted himself on the corner of the coffee table.

He sighed, running his fingers through the black bristles of his brush cut. “Look, Day, there’s no easy way for me to say this…”

Her left eye twitched something awful. The occasional spastic tick had started to occur more frequently in the past week, so she knew the move had pushed her mental needle over into the extreme red zone of her stress gauge. Now, she feared it was a warning sign from her cerebral cortex that her brain was about to pop.

“I’m sorry, but I don’t think this thing is going to work out.”

Panic set in. “What thing? What’s not going to work out?”

“I mean us. Living together. It’s not what I want anymore.”

“You don’t think it’s what you want anymore?” She balked. “Since when?”

“A while now, I guess. I’ve realized how much I value having my own space.”

Code for how much he liked screwing around behind her back, she figured. “But I’m here. I moved to Columbus so we could be together.”

“I know, I know. And I feel shitty for not saying something sooner. But you were so intent on this, I didn’t have the heart to say no.”

She tried not to cry. Or pound his boyish good looks into ground beef. How had CJ neglected to mention having a not-so-sudden change of heart? How could she have missed the signs? Well, okay, he had been a little off lately. Distant. She always called first, not the other way around. And there was that niggling feeling when he claimed he hadn’t heard of a single radio job opening for her. In six whole months. “You couldn’t have dropped a hint that you wanted to break up before I wrapped my entire life in bubble wrap, shoved it into a box and drove it across two state lines?”

“Sorry? You’re sorry?” She slapped her hands on her thighs, summoning Herculean effort to keep from lunging for his throat. “I’m starting a new job on Monday. I have no money and no place to live. Am I supposed to sleep in my car?”

“Listen, you can stay here tonight. Hell, stay a week or two if you need.”

“Thanks CJ, that’s so fucking generous of you.”

“I mean it. The pull-out is yours until you can find your own apartment.”

“I couldn’t scrape together enough for a night in a fleabag motel, let alone rent a decent apartment,” she said. “I might need a little more than a week.”

“Well, bunk here as long as you need,” he said. “But just to make it perfectly clear, we’re over.”

“Oh, we are sooo over. No doubt about that.” She fell back into the pillow behind her, more aggravated by having gone through the hassle of moving than about being dumped on arrival by CJ. What did that say?

He patted her knee good-naturedly. “Come on, we had a pretty good run there, didn’t we?”

“So what went wrong?” she asked. “Was it something I did?”

“It’s not you, it’s– That’s the best you can do?” She pressed two fingers against her temple, rotating clockwise to slacken the tendons that had gripped her eyeball since she walked through the front door. “When will I learn to stop falling for you jocks? All you ever do is break a girl’s heart.”

“At least we’re getting this all out in the open before things went any further, right?”

“Sure. I thank my lucky stars you didn’t break the news on our wedding night. Or maybe in the delivery room while I was pushing out a kid.”

“Yeah, right. As if we’d ever–” He averted his eyes and cleared the laughter from his throat. “Well, I’m glad you’re taking this well because I really thought you were gonna freak. But you haven’t screamed, cried or thrown anything.”

The Day of the Nefilim by David L. Major
Tyler, Lynn - For Her Honor [For Her] (Siren Publishing Classic) by Lynn Tyler
Diving In by Galway, Gretchen
Teranesia by Greg Egan
The Spurs of Iron Eyes (Iron Eyes Western #3) by Rory Black
Kate Allenton by Guided Loyalty
(2002) Deception aka Sanctum by Denise Mina
The Wind After Time: Book One of the Shadow Warrior Trilogy by Chris Bunch
Sleepless in Las Vegas by Colleen Collins
Blades of Winter by G. T. Almasi