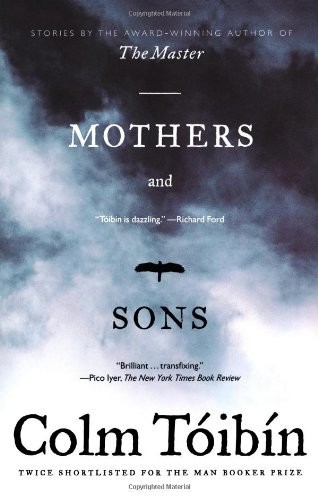 INTERNATIONAL ACCLAIM FOR
Mothers and Sons

“Tóibín is a writer of extraordinary emotional clarity … these are beautiful stories, beautifully crafted.”

“Colm Tóibín is a master of emotion.”

“Astonishing.… A rich but supple prose style seals each story’s – and thus the collection’s – absolute success.”

“Tóibín relentlessly strives for psychological truth and ends up making literature of a pleasingly grown-up kind.… He is a subtle, intelligent and deeply felt writer.…”

“Tóibín has an ability to encapsulate an entire community in just a few words.… Add to that Tóibín’s fearlessness, his seemingly effortless command of dialogue and character and his sensitivity to nuance, and the result is a powerful and winning collection.”

Bad Blood: A Walk Along the Irish Border
Homage to Barcelona
The Sign of the Cross: Travels in Catholic Europe
Love in a Dark Time

The Modern Library: The 200 Best Novels
in English Since 1950
(with Carmen Callil)
The Penguin Book of Irish Fiction

For
Michael Loughlin
and
Veronica Rapalino

The Use of Reason

The Name of the Game

A Priest in the Family

The Use of Reason

T
HE CITY WAS
a great emptiness. He looked out from the balcony of one of the top flats on Charlemont Street. The wide waste ground below him was empty. He closed his eyes and thought about the other flats on this floor, most of them empty now in the afternoon, just as the little bare bathrooms were empty and the open stairwells were empty. He imagined the houses on the long stretches of suburb going out from the city: Fairview, Clontarf, Malahide, to the north; Ranelagh, Rathmines, Rathgar, to the south. He thought about the confidence of those roads, their strength and their solidity, and then he allowed his mind to wander into the rooms of suburban houses, bedrooms empty all day, the downstairs rooms empty all night, the long back gardens, neat, trimmed, empty too for all of the winter and most of the summer. The sad attics empty as well. Defenceless. No one would notice an intruder scaling a wall, flitting across a garden to scale the next wall, a nondescript man checking the back of the house for a sign of life, for alarm systems or a guard dog, and then silently prising a window open, sliding in, carefully crossing a room, watching for an easy exit. He would
open a door without making a sound, so alert as to be almost invisible.

He thought of the emptiness of Clanbrassil Street as his mother made her way to the Dock. It was as though the very air around her, the pavement too and the bricks on the buildings, were aware of the danger she posed and got out of her way. Her blonde hair untidy, her house slippers dragging as she slouched towards the public house. A fake gold ring, and fake bangles, and loud gold earrings hitting against the redness of her lipstick, the green of her mascara, the blue of her eyes. His mother turned now to see whether a car was coming so she could cross the road and found, he imagined, the road completely empty, no traffic at all, the world made empty for her deepest pleasure.

His mother, as she neared the public house, knew that the neighbours were afraid of her sudden kindnesses as much as her tantrums and her drunken rages. Thus a smile from her could be as unwelcome as a scowl. Mainly, she managed a look of indifference. In the street as much as the pub, she did not need to threaten, it was known who her son was, and it was believed that his loyalty to her was fierce. He did not know how she had managed to make everyone believe that he would extract revenge for the slightest insult to her. Her threats too were empty, he thought, emptier than anything.

He stood at the balcony and did not move when his visitor, who had approached the building by the hidden side door of the complex, appeared. He allowed, as he did each week, Detective Inspector Frank Cassidy to pass him and enter the small flat, which was owned by his sister-in-law, and used by him only once a week. Cassidy was in his
day clothes, his ruddy face displaying a mixture of furtive guilt and businesslike self-confidence. He paid Cassidy every week, a sum either too much or too little, the amount wrong enough to make him feel that Cassidy was fooling him rather than betraying his own side. In return for the money, Cassidy gave him information he mostly knew already. Nonetheless, he always felt that if the forces of law and order were coming close to him Cassidy would somehow make this clear. Cassidy would let him know, he believed, either as a favour, or as a way of making him panic. Or perhaps both. He himself told Cassidy nothing, but he could never be sure that some day his reaction to a piece of information might not be as much as Cassidy would need.

‘Tell them to watch away. The sheep are eating grass. It’s against the law.’

‘From a cosy armchair in Harcourt Street,’ he said.

‘Do you want to hear it a third time?’

‘And they’ve put a young fellow on to your case. Mansfield is his name and you’ll be seeing a bit of him, I’d say.’

‘You told me that last week.’

‘Yeah, but he’s busy already. He doesn’t look like a Guard. He’s looking for jewellery.’

‘Tell me something new next week.’

When Cassidy left he went back to the balcony and surveyed the grimy world once more. As he turned away, something came to him, a sharp memory from Bennett’s jewel robbery. They had ordered five of the staff, all men, up against the wall when one of them asked if he could use his handkerchief.

He was alone guarding them with a pistol, waiting for the others to round up the rest of the staff. He had told the guy in a fake lazy American accent that if he wanted to blow his nose then he had better take out his handkerchief all right, but if he took out one other thing, he would be dust. He had sounded casual, trying to suggest that he was not afraid to address such a stupid question. But when the guy removed the handkerchief, all the loose change in his pocket had come too, coins rattling all over the floor. The men looked around until he shouted at them to face the wall again quickly. One coin kept rolling; his eyes followed it and, as he bent to pick the other coins up, he moved to pick that up too. Then he walked over and handed the coins to the man who had needed to use his handkerchief. This made him feel calm, relieved, almost happy. He would rob more than two million pounds’ worth of jewellery, but he would give a man back his loose change.

He smiled at that thought as he came back into the flat and took off his shoes and lay on the sofa; he would wait for an hour or two now that Cassidy had gone. He remembered too that in the heat of that robbery one of the women workers had refused to be hustled into the men’s toilet.

His three companions, Joe O’Brien with his balaclava
on, and Sandy and that other fellow, suddenly not knowing what to do, had turned to him as though he might give orders that they should in fact shoot her.

‘Take her and her friends to the ladies’,’ he had said quietly.

He picked up the newspaper and looked again at the photograph in the
Evening Herald
of Rembrandt’s
Portrait of an Old Woman
, asking himself whether it was the painting which had reminded him of that story, or the story which reminded him to look again at the photograph. There was an article beside it saying that the cops were working on a number of leads which could result in the recovery of the painting. The woman in the painting looked stubborn too, like the woman in the factory, but older. The woman who refused to go into the men’s toilet was the sort you would see coming back from bingo with a group of her friends on a Sunday night. She did not look like the woman in the painting at all. He wondered what the connection between them was until he realized that, except for the stubbornness, there was none. The world, he thought, was playing tricks with his mind.

Your mind is like a haunted house. He did not know where the phrase came from, if someone had said it to him, if he had read it somewhere, or if it was a line from a song. The house from which he had stolen the paintings had all the look of a haunted house. Maybe that was how the phrase had occurred to him. Stealing the paintings had seemed like a good idea at the time, but it no longer seemed so. He had stolen the Rembrandt picture which now appeared two months after the robbery on the front page of the
Evening Herald
, plus a Gainsborough and two Guardis
and a painting by a Dutchman whose name he could not pronounce. The robbery had made headlines for days in the newspapers. He remembered laughing out loud when he read about a gang of international art robbers, experts in the field. The robbery had been linked to others which had taken place in recent years on the European mainland.

Three of these paintings were now buried in the Dublin mountains; no one would ever find them. Two others were in the attic of Joe O’Brien’s neighbour’s house in Crumlin. Between them, they were worth ten million pounds or more. The Rembrandt alone was worth five million. He studied the photograph of it in the
Herald
, but could not see the point of it. Most of it was done in some dark colour, black he supposed it was, but it looked like nothing. The woman in the painting appeared as though she needed cheering up, like some sour old nun.

Five million. And if he dug the painting up and burned it, it would be worth nothing. He shook his head and smiled.

He had been told about Landsborough House and how much the paintings were worth and how easy the job would be. He had spent a long time thinking about alarm systems and even had an alarm system installed in his own house so that he could think more precisely about how they worked. Then one day it had come to him: what would happen if you cut an alarm system in the middle of the night? The alarm would still go off. But what would happen then? No one would repair the system, especially if they thought that the ringing was a false alarm. All you had to do was withdraw when the alarm went off, and wait.
Then an hour later when the fuss had died down you could return.