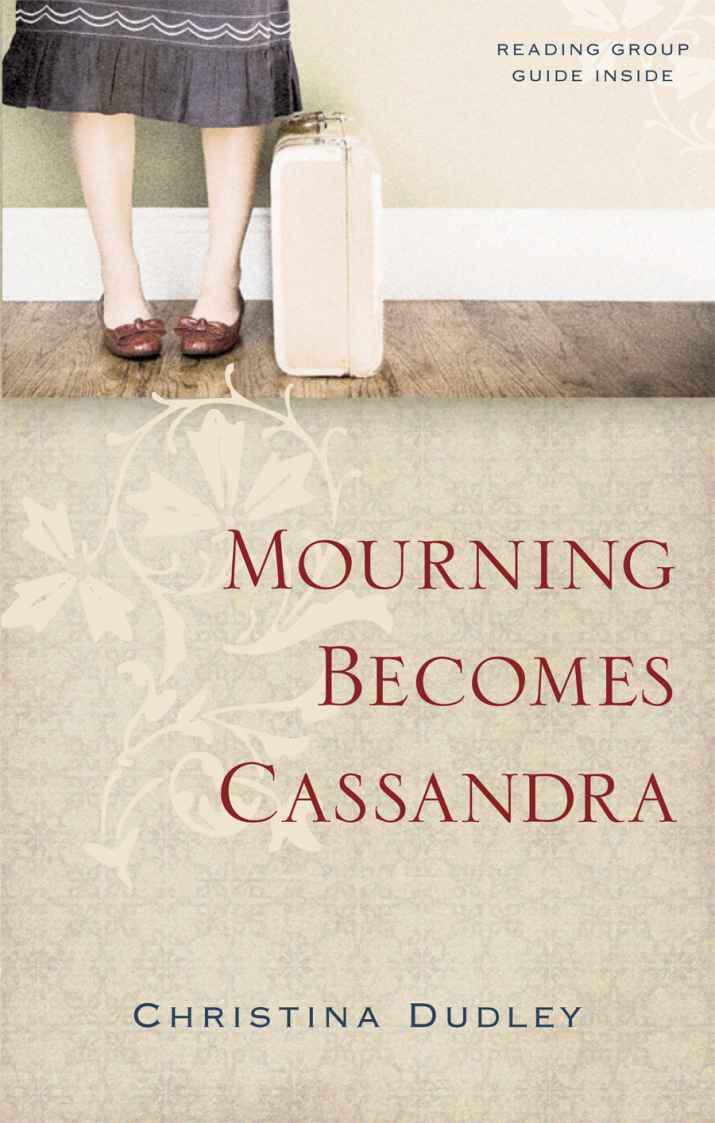 This book, or parts thereof, may not be reproduced, stored in a retrieval system, or transmitted in any form or by any means, electronic, mechanical, photocopying, recording or otherwise, without the written permission of the publisher.

To my husband Scott.

You inspired the very best parts of this book

and, along with our children,

suffered neglect while it was written.

Many thanks to my initial group of devoted readers, who generously and enthusiastically provided feedback, helpful suggestions, and encouragement. They paid me the ultimate compliment of wanting to read on and not requiring any hounding. The story is better for their input.

In particular, thank you to Lucia Kim, who lifted my spirits with her eagerness and whose readerly experience brought me the “Christian fiction” perspective; Coco Fulton, who made sure no one in the book got pious and who, by reading the last several chapters in one day, let me witness a mini-miracle; Carrie Nordberg, who lent me her sharp editorial eye, besides Cass’s lovely voice and uncharged cell phone; my sister Cindy Spann, who suffered through the religious stuff and helped me out with Kyle; and Christine Corneille, who graciously let me improvise off elements from her life and even let me steal a joke or two. My divot became more of a crater, wouldn’t you say?

Thank you to Jorie Gulbranson for hooking me up with Terri Kraus. Terri, I cannot thank you enough for reading through my book out of the goodness of your heart and bringing your published expertise to bear. You have a wonderful sense for the timing and movement of a scene. I owe you a gelato.

Finally, my family showed great forbearance through this whole process. The house got messier, I got more absent-minded, a school bus or two got missed, a few thousand dollars evaporated…Thank you for putting up with me. You are a blessing.

When your parents name you something like Cassandra, you would expect to see things coming, but the year I turned 31 caught me completely unaware.

At an age when most of my acquaintance—including me—had joined the ranks of the happily-paired-off and reproducing, I was called to leave that hallowed group and rejoin the Third Wheels of the world.

On the longest day of the year, one failed heart led to my husband driving off the road and flipping into a ditch, taking our toddler daughter with him, while I obliviously sweated through a Hot Yoga class downtown.

I’d tell you about the weeks that followed, except the memories have the grainy quality of old home movies. There was plenty of weeping, some hysterical, mostly me, amplified by my in-laws. Church friends trooping through the house bearing hot meals that I think I occasionally sampled. Garbage bags full of paper plates and plastic ware. A service where I got stuck in a receiving line, shaking hands with people I recognized and didn’t recognize, like Facebook friending come to life.

Who was that guy? Did he go to college with Troy, or did he come from my own junior high algebra class?
What the heck is
she
crying about?
Did she have a thing for Troy? Am I even at the right service?

And finally one of those Moments in Life Which No One Ever Tells You About: me alone in the empty house after everyone is all gone and the funeral-baked meats are history and even the cards have stopped coming. Me and a closet full of Troy’s clothes and the garage bins stuffed with hand-me-downs that Min didn’t live to grow into.

Fast forward a year. Really, this isn’t difficult to do because I remember almost nothing about that first year. Maybe because I spent most of it in bed. Friends and family came around frequently, forcing me to get up once in a while, but the instant they were gone—boom!—back in I’d go.

I’m embarrassed to say that, an entire year later, not much had changed: the house looked exactly the same, complete with Troy’s and Min’s things still unpurged. Exactly the same, except for the months of bills and correspondence piled up on the dining table, unopened, and the dumpster that had just been dropped off in the driveway. Mom called to tell me, gently as ever, that now that I’d passed the one-year mark, it was time to get on with it.

“Your life, sweetheart,” she answered calmly. “I’ve ordered you a dumpster so you can clean out. Do you want Dad and me to come up and help you?”

“And you may want to call Raquel and let her know you’re cleaning out, Cass.” Raquel was my mother-in-law. I supposed I would have to, but given Raquel’s pack-rat tendencies, I didn’t see me picking up the phone until the dumpster was long gone.

For a few days I had been steeling myself for this, the Grand Purge, the Beginning of the Second Half of My Life, but now that the dumpster sat out front it all seemed too much. Really, it had only been a year—did Mom really think I was up to this?

Several hours later, I was still sitting on my bed, nothing accomplished, holding the flame-thrower of a lighter Troy would use to start fires in the fireplace—pressing down the safety with my thumb and pulling and releasing the trigger. Because wouldn’t it actually be easier to burn down the house than to sort through it? Easier emotionally, I mean. Trade in the slow torture and hours of crying by myself for the distraction of an insurance hassle.

I pulled on the lighter trigger again and admired the burst of flame shooting out like a dragon’s breath. But what if the hassle wasn’t distracting enough, since I would have to confess to setting the fire myself? That meant even at best I wouldn’t get any insurance money, and at worst I think I’d get jail time.

I pulled the trigger back again: pull on…release off…Then again, what a relief to torch those Penney’s buy-one-get-one curtains that came with the place. They were some textured, artificial material that would probably burn blue and toxic.

The last thing I needed, at any rate, was more insurance money coming my way. I was already at a loss what to do with Troy’s life insurance payout. Some mornings I thought I would give it all to the church or one of our charities; other mornings I thought I’d buy a one-way ticket to Antarctica or real estate on a snowy Himalayan peak, where I could live hermit-like; then again, I might need that money to fund my total re-education, if I decided to start over and become something completely other: an astronaut or a glaciologist or a game warden. I flicked the lighter again. The only thing I knew for sure was that, whatever I did, it wouldn’t require this two-bedroom, two-bath house.

The phone rang. On the fifth ring I checked the caller ID: Joanie. Anyone else and I might have let the machine get it, while I went back to my pyro fantasies, but Joanie had always been missing the sympathy-and-tact chip, so I didn’t mind talking to her. I could trust her not to ask in a low, hushed, deathbed voice, “How are you,
really
?” Those voices and questions always triggered tears, followed by a bad headache.

“Hey, there you are—are you busy? Got a minute? I wanted to spring a good idea on you.”

Joanie had her good ideas about every half hour, 99% of which never came to anything, but I felt a little curiosity flicker. “Is this about the dessert place you want to open? Or the bed-and-brunch, so you don’t have to get up too early to cook?”

“Phil who? Is this someone you’re dating?”

“No, no,” she said again impatiently, “Phyllida Levert Phyl. Phyl-with-a-y Phyl. Anyhow, if we did Daniel’s cooking and cleaning, he’d give us reduced rent.”

I felt a little laugh in my throat. Rusty, but it was there. “Isn’t this the brother who sleeps with a different supermodel every couple weeks? What makes you think he’d want housekeeping staff around?”

“Because every man wants women around to do all the work. Especially Daniel! He just doesn’t want to have to marry someone to get the free labor. And since he’d be living in the in-law, he wouldn’t even have to be with us. He could just grab his dinner and go back to his place. We could even cook enough for whoever he’s sleeping with. I figure if we rotate the cooking and cleaning it’s no big deal. It’s a win-win. Come on, Cass—don’t you want out of that house? I would. It’s gotten creepy, like your own personal ancient history museum. Just pack a suitcase and set fire to the rest.”

The lighter fell out of my hand. “How did you…?”

I recovered hastily. “Where’s the house, and did you run this idea past him?”

“It’s in Clyde Hill, just a quick bus ride from downtown. You’d hardly even need a car. And yes, I did run the idea past him. What does he have to lose? He already pays to have meals delivered to his condo and to have someone clean for him. This way he’d get permanent benefits, plus some rental income from us.”

“He said it sounded okay by him, as long as we agreed that if he hated us, he could kick us out. But we’d be ideal! We’re quiet, clean, good cooks. Most of our friends are churchy types. And I told him you guys already knew he hated church and church people, and that we would promise not to try to convert him. We could put that in the lease!”

Since God and I weren’t exactly on speaking terms at the moment, this would be no problem. Not that I’d ever been much of a sandwich-board-wearing Bible thumper anyhow, but right now I wasn’t in the mood to talk faith at all. In fact, my moods no longer ranged far afield. Depression, loneliness, anger, depression, loneliness, anger. I hoped my voice didn’t sound too pathetic: “But Joanie, do you and Phyl really want to be hanging out with a depressed, lonely widow?”

Her lack of sensitivity made me think she was sincere. “What would he want for rent?”

An unfamiliar thrum of excitement started in my stomach. This might be one of the 1% of Joanie’s ideas that actually flew. “Did you talk to Phyl? What did she say?”

“Well, you know Phyl. She’s been wondering what to do since her roommate got married. This way she doesn’t have to find a new one. Plus she can indulge her fantasies for my brother. You know, where she converts him from a self-absorbed, sexaholic into a thoughtful, one-woman Friend of Jesus.”

The rusty laugh made it out of me this time. “But the lease! The ‘no-conversion’ clause! I don’t want her wrecking this for us. Besides, it’ll be fun to observe Daniel and his mating habits. We’ll be like the Jane Goodalls of Clyde Hill.”