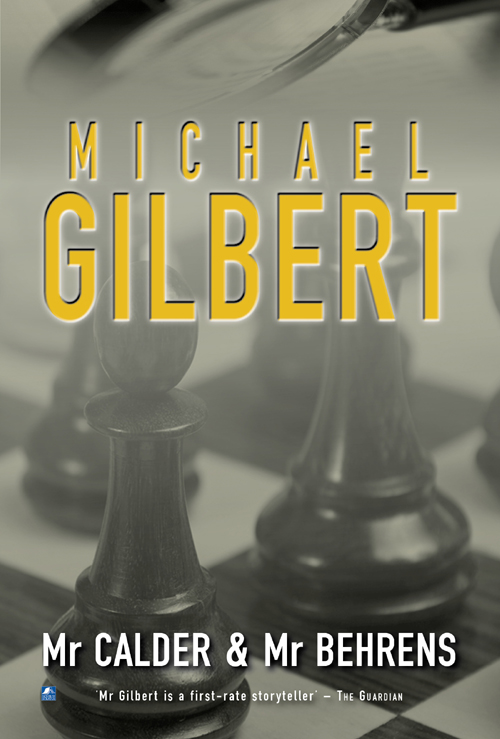 HRF Keating stated that
‘Smallbone Deceased’
was amongst the 100 best crime and mystery books ever published.
"The plot,"
wrote Keating, "
is in every way as good as those of Agatha Christie at her best: as neatly dovetailed, as inherently complex yet retaining a decent credibility, and as full of cunningly-suggested red herrings."
It featured Chief Inspector Hazlerigg, who went on to appear in later novels and short stories, and another series was built around Patrick Petrella, a London based police constable (later promoted) who was fluent in four languages and had a love for both poetry and fine wine. Other memorable characters around which Gilbert built stories included Calder and Behrens. They are elderly but quite amiable agents, who are nonetheless ruthless and prepared to take on tasks too much at the dirty end of the business for their younger colleagues. They are brought out of retirement periodically upon receiving a bank statement containing a code.

Much of Michael Gilbert’s writing was done on the train as he travelled from home to his office in London:
"I always take a latish train to work," he explained in 1980, "and, of course, I go first class. I have no trouble in writing because I prepare a thorough synopsis beforehand.".
After retirement from the law, however, he nevertheless continued and also reviewed for
‘The Daily Telegraph’
, as well as editing
‘The Oxford Book of Legal Anecdotes’
.

Languages:
(A) Standard-Albanian and Hungarian (B) Standard-Greek, Italian, Arabic, Russian

War service:
Still classified (it has been mentioned in
Reminiscences
of Franz Mulbach, Bonn, 1963, that S. B. was in Germany for two months prior to the first attempt on Hider’s life and supplied the sabotage device which failed to detonate in the Fuehrer’s plane).

Persian deerhound; by Shah Jehan out of Galietta.

1
The Twilight of the Gods

The German artillery observation officer said, “I shall now proceed to range one gun on to the slit trench. If you will use your binoculars, gentlemen, you will observe it quite easily at the foot of the small knoll due east of where you are now standing.”

The small group of privileged spectators raised field glasses in gloved hands and focused them.

“The trench is exactly one and a half metres deep and one metre in width. It has been dug into chalk and flint. Owing to unavoidable discrepancies in the charges, it would not normally be possible to guarantee actually to hit the trench more than once in a hundred rounds.”

“I wager,” said General Runnecke, who commanded XIV Corps in the Banja Luka area of Yugoslavia and who was, therefore, nominally at least, the senior officer present, “that he did all his ranging before we arrived.”

“In his place I should have done so,” agreed the staff officer with the gunner tabs who was standing at his elbow.

The report from the gun, sited some five thousand yards to their rear, arrived at the same time as the shell, which threw up a puff of white chalk and grey smoke just beyond the slit trench.

“Correct for line,” said the observation officer smugly. “Plus for range. I will drop fifty metres and repeat.” The second shell landed, if anything, slightly further forward.

“You will see what I meant when I spoke of the inaccuracy of a high explosive charge,” said the observation officer. “The range that time was shorter but the shell went further. I shall fire again at the same elevation.”

This one landed almost on the lip of the trench.

“Two plus, one minus,” said the observation officer. “I think we can accept that as the range. We will now repeat, using the new experimental fuse.”

There was a stir among the spectators. This time it was different. Instead of a dull report when the shell landed, there was the sharp, distinctive crack of shrapnel.

“Height of burst,” said the observation officer, “approximately ten metres. That should be very satisfactory.”

“Damned uncomfortable, if you ask me,” said General Runnecke loudly, and the officers laughed. The only man who appeared entirely serious, his gaze concentrated on the slit trench, was the single civilian among the uniformed group. He was a thin, serious, brown-faced man in his early thirties, with a pair of steel-rimmed glasses on his beaky nose. Despite the January weather, he was wearing only a thin raincoat.

He said, in good but clearly not native German, “By my estimation, seven and a half metres.”

The observation officer ignored this and said, “I shall order the same gun now to fire six rounds. This will avoid the necessity of ranging the other guns of the troop, but will produce the cumulative effect of a salvo of six guns.”

The six cracks followed each other at twenty second intervals. The height of burst was unmistakably consistent. As fast as one cloud of yellowish lyddite smoke shredded away in the breeze, another filled its place.

“Stand your troop down,” said the General. “We will inspect the target. Come along with me, Dr. Brancos.”

The whole group moved downhill towards the slit trench, the general with the civilian in the lead, followed by a stout, white-faced officer wearing the insignia of a
gruppenfuehrer
in the SS, the junior officers a decorous pace or two behind. At the edge of the trench they paused.

There were six men in it. They had been fastened there by a chain attached at both ends to posts hammered into the ground and passing through iron shackles round the ankle of each. Four of the men were clearly and horribly dead. Two of them were still moving. General Runnecke motioned to the junior officer behind him, who drew an automatic, stepped forward and shot them both carefully through the back of the neck.

“I think,” said the General to Dr. Brancos, “that we may regard the experiment as eminently satisfactory.”