Read Murder of a Snob Online

Murder of a Snob 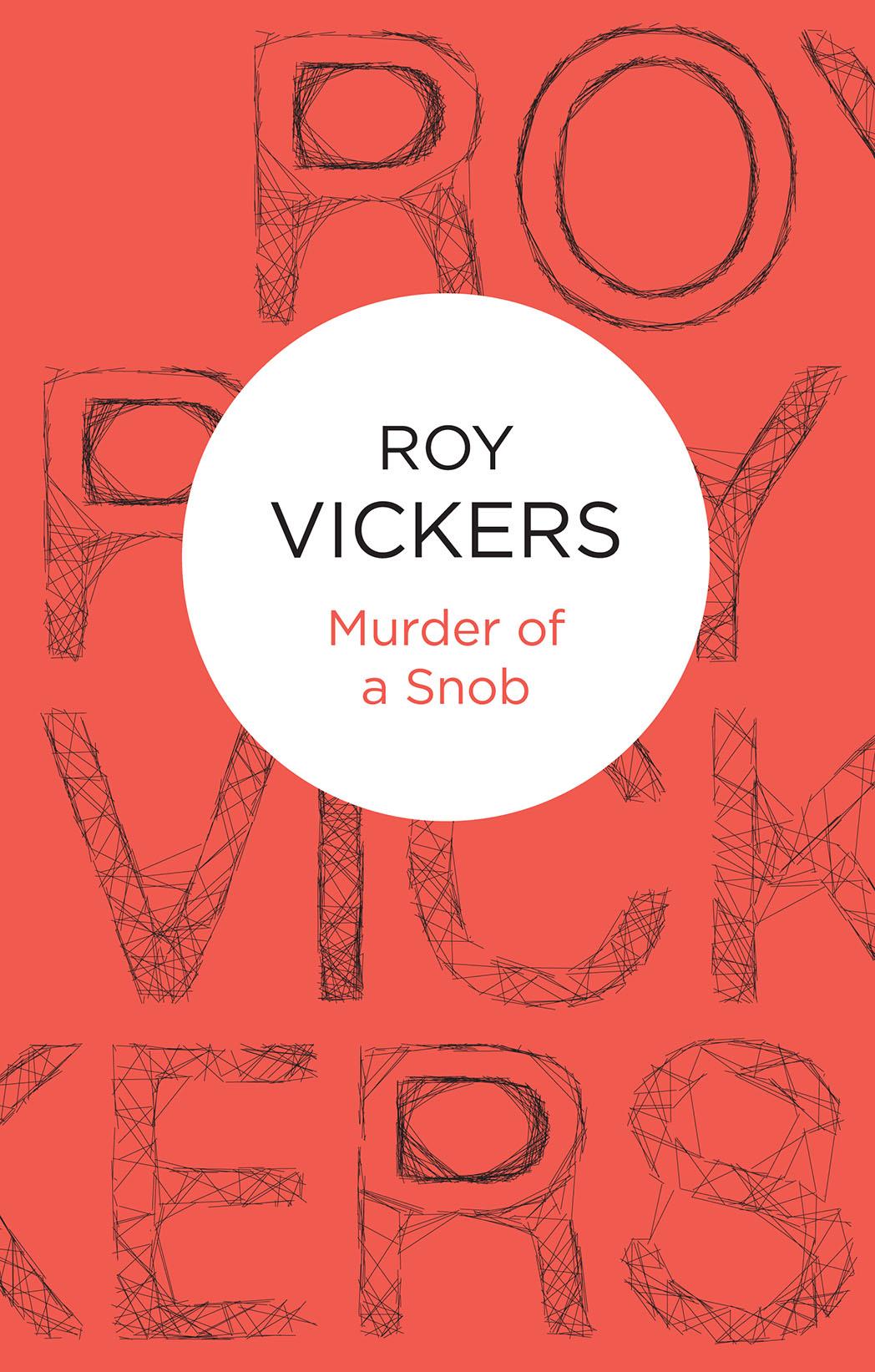 Roy Vickers was the author of over 60 crime novels and 80 short stories, many written under the pseudonyms Sefton Kyle and David Durham. He was born in 1889 and educated at Charterhouse School, Brasenose College, Oxford, and enrolled as a student of the Middle Temple. He left the University before graduating in order to join the staff of a popular weekly. After two years of journalistic choring, which included a period of crime reporting, he became editor of the
Novel Magazine
, but eventually resigned this post so that he could develop his ideas as a freelance. His experience in the criminal courts gave him a view of the anatomy of crime which was the mainspring of his novels and short stories. Not primarily interested in the professional crook, he wrote of the normal citizen taken unawares by the latent forces of his own temperament. His attitude to the criminal is sympathetic but unsentimental.

Vickers is best known for his âDepartment of Dead Ends' stories which were originally published in
Pearson's Magazine
from 1934. Partial collections were made in 1947, 1949, and 1978, earning him a reputation in both the UK and the US as an accomplished writer of âinverted mysteries'. He also edited several anthologies for the Crime Writers' Association.

Samuel Cornboise was murdered because he was a snob. Not the harmless kind of snob who wants to be admitted to ever more exalted circlesâindeed, it is doubtful whether he could conceive of a circle of which he was not the centre. His snobbery was of the mystical kind. He believed in “birth and breeding.” In defiance of biological science and social history, he believed that a small percentage of the population possesses the power of transmitting to its descendants certain moral qualities which make them a natural aristocracy.

“Take my case!” he would insist. “Born in a London slum. Finished schooling at fourteen. Slipped over to Africa when I was sixteen. I was fifty-six before I found out that I was heir to a barony, and it cost me thirty thousand to establish my claim in the courts. âThe Bell-Hop Baron' they call me in Africaâand why not! When I really was a bell-hop I knew I was the stuff of which barons are made!”

Bell-hop, diamond miner, steeplejack, and whatnot! Yet at thirty he was a substantial man, and at forty a millionaire. He discovered in himself a talent for financeâthe most mysterious of all talents to those who do not possess it.

Though he could never interpret a menu with any confidence, he was at one time a hotel king. In one of his own hotelsâif such words have meaningâhe was nearly killed by an accident to an elevator. By a process which the initiated will accept without wonder, he brought and won an action against himself, damages being inflated by the fact that, for the rest of his life, he would have to wear a wig to conceal a silver plate set in his skull.

After his convalescence, he abandoned hotels, to become something imperial in Ladies' Footwear. He never directed these enterprises. He never organised anything, except figures on a blotting padâgenerally someone else's blotting pad. He went into a score of trades and out again, leaving behind him, not men thirsting for his blood, as one might suppose, but an ever-widening circle of admiring friends. He even seems to have âgone into' himselfâCornboise Investment Trust Limitedâand strangest of all, we must believe that he went out of himself as irrevocably as if he had been Ladies' Footwear. When he retired and returned to England he had the greater part of three million pounds, most of it already converted into Government Stock.

To make all that money in that way without going in fear of an accountantâor of a gunmanâconnotes a man of remarkable enterprise, intelligence and shrewdness. Behind his financial jugglery there must have been an acute sense of economic values. But human values were beyond his power of analysis. He sacrificed his personal happiness to an adolescent dream of an aristocracy that had never existed outside melodramaâthe first sacrifice being his wife.

Before he had floated his first company he married a respectable, buxomly attractive girl, who provided the domestic background he needed but was unable to provide an âheir.' He separated from her, after discovering that her religious principles forbade divorce.

In later life, his dream-interest centred on his nephew, the son of his elder brother, head potman of the
Goat-in-Flames
, an historic but otherwise obscure tavern in north London. When his brother was accidentally killed, Samuel, in effect, adopted the twelve year old boy, sent him to an expensive school, thence to Oxford with a fantastic allowance and every possible encouragement to get into mischief. It was Samuel's idea of grooming him for inheritance of Samuel's fortune.

No doubt, Samuel's delusions in the matter of blue blood would have remained an amusing foible, but for his freak inheritance of a dormant barony. It was Andrew Querk, his agent in England, who discovered the thin thread of evidenceâQuerk who engaged a team of lawyers and lineage experts. The thin thread was doubled and re-doubled on itself until it became a cable, which hoisted Samuel Cornboise into the peerage. The romantic nonsense about birth and breeding seemed to be translated into reality.

On his retirement, he decided to âgo into' aristocracy as he had gone into Ladies' Footwear, using much the same technique.

The result was immediate disaster. Cornboiseâthe hero of so many financial epicsânow correctly entitled Lord Watlingtonâhad been in England scarcely a month before he set the stage for his own murder.

In the interval between finishing lunch and taking his afternoon doze, he made three dangerous mistakes, the first of which was a witless under-estimate of Claudia Lofting, a vivacious brunette of twenty-six engaged to marry his nephew and sole heir. She was herself a sprig of impoverished aristocracy; she possessed, in addition to physical beauty and intelligence, most of the qualities which he fondly imagined to be aristocratic. Yet he thought he could afford to tell her to her face, in the presence of his nephew and Andrew Querk, that she was not up to the standard he requiredâthought it safe to offer to buy her off on liberal terms.

By way of proof, he confronted them with letters written by Claudia before she had met Ralphâletters which seemed to Watlington to destroy her reputation. So that his trustees should make no mistake, he sealed the letters in an envelope containing his Will, which stipulated that his nephew's bride should be “a woman of reasonable education and unblemished social reputation.”

Ralph Cornboise, the nephew and sole heir, was equally lacking in the desire to make money. He desired, primarily, to live. He believed, with slightly more justification than is usual in such cases, that his life would not be worth living without Claudia.

Thus, his uncle's technique, which was based on converting opponents into allies, was doomed to fail. In this case, the technique followed the usual pattern of conciliation, beginning with an invitation to Claudia, also to Ralph, to spend a weekend at Watlington Lodge,
âwith me and my old friend, Andrew Querk, and to meet a few new friends at dinner on Saturday night.'

On Saturday night, the guests duly arrived. But there was no dinner party because, by that time, the host was dead.

In the county police headquarters at Kingsbourne, Colonel Crisp, the Chief Constable, had been kept at his desk throughout Saturday afternoon preparing evidence in a river smuggling case. As the Town Hall clock boomed seven he touched the bell push which summoned his aide, David Benscombe, a presentable, eager junior in the early twenties.

“Let me have what you've done and you can knock off now.”

“Thank you, sir. Have you finished?”

“No. But I shan't need you any more tonight. Better go, boy, while the going's good â¦ There! You've lost your chance. Take that call will you?”

Benscombe took up the receiver.

“The Chief Constable is in conferenceâI'm speaking for him â¦ Oh-h! â¦ Are you quite sure it's murder? â¦ Right, we'll come along. Who are you, please? Hullo? Damn!”

The last under his breath as he turned to his chief.

“Lord Watlington murdered, sir. At Watlington Lodge. He's that South African millionaire featured in the local paper three weeks ago. Shall I call Detective-Inspector Longley? As a matter of fact, I know he's not at homeâtold me he was going up river to fish. There's Inspector Bassett?”

“No. I'll go myself. You've lost your weekend, boy. Tell Bassett to call up the team. We'll go in my car. They can follow us.”

Colonel Crisp had held his present post for a few weeks only. He was, as it were, a permanent temporary Chief Constable, being seconded by the Home Office to any county that had need of his services. Behind him was a distinguished military career as a leader of guerilla troops. To look at, he was unimpressive. A little above medium height, he was broad and stocky. He slouched: all the pockets of his uniform bulged, so that he barely escaped slovenliness. His hands were noticeably large and seemed to have more than the natural complement of knuckles.

During the war years he had become one of the world's greatest experts in leading hand-picked bands of intelligent, civilised men in the dreadful business of inflicting death and destruction. His disciplined desperadoes had consisted mainly of ex-shop assistants, bank clerks and students; for he had discovered that the tough-guy type of humanity is not even tough. He was himself mild and unassertive in manner. He would speak with the same informal friendliness to judge and criminal, to the lowest and the highest, which sometimes astonished the highest.