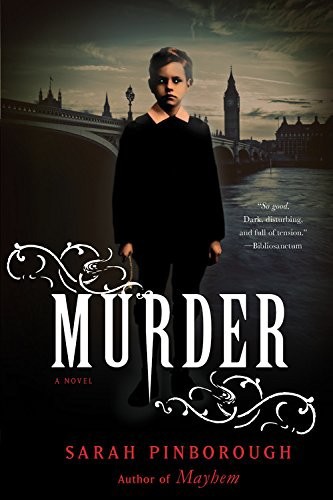 5 Extract from letter from James Harrington to Edward Kane, dated 1888

13 Extract from letter from James Harrington to Edward Kane, dated 1888

28 Extract from letter from James Harrington to Edward Kane, dated 1889

47 Extract of Florence Jones’ testimony at the Old Bailey, 1899

52 Extract of David Voice’s testimony at the Old Bailey, December, 1899

The moral right of Sarah Pinborough to be identified as the author of this work has been asserted in accordance with the Copyright, Designs and Patents Act, 1988.

You can find this and many other great books at:
www.quercusbooks.co.uk
and
www.jofletcherbooks.com

For my mum, who taught me how to read and gave me her love of a good story.

Extract from letter from James Harrington to Edward Kane, dated 1887:

… and I have just returned from their funerals. I suppose it is a blessing that they are to lie at rest together and neither one must continue living without the other (as I truly believe, as I told you in Venice, that my parents did love each other) but my heart is heavy with grief, and although I am almost recovered from the poisoning that took them from me, I continue to feel plagued by the black cloud that has hung over me since my return from Poland
.

I wish you were here. I have never made friends overly easily, and those few I have tended towards are of a serious sort – there is not a fellow among them I feel I could bare my soul to without judgement. Your lively spirit and positive attitude would be a tonic to me in my present predicament.

In my previous letter I mentioned that I had been ill in Poland but there was much that I omitted – perhaps because I wished to forget most of the experience myself; I blamed the fevers I had suffered for addling my brain somewhat. However, since my return to London I have begun to believe – and God help me in this – that there may be some truth in the madness. Or perhaps it is I who am mad. I have tried several times to write down what really occurred, about what the villagers and my poor dead guide Josep believed had infected me, but
each time I have thrown the paper onto the fire. It is enough that I am plagued with doubts without driving you away with tales of monsters and legends that have no place in this modern world.

And yet I am still gripped by terror.

The night my mother and father fell so fatally ill, we had eaten a jar of mushroom preserves I had brought back with me from my travels. I heard myself tell the doctor as much as soon as I was well enough to speak, and there was an empty jar and the remnants of food to evidence this – and yet now I am recovered, I cannot remember ever buying the mushrooms, or eating the dinner, although I must have done both. This is not because of the effects of the poisonous mushrooms; I have been suffering periods where my memories are vague, as if sometimes I am living in a fugue state, where my desires and emotions are not entirely my own. I fought with my father that night – I have a memory of the anger, but not of why we argued. One day I found myself walking through a slum part of London, with no recollection of getting there other than vague dream-like memories that felt at once to be mine and not mine.

I had a similar experience in Paris, but that time, when I regained my senses, I had blood on my clothes. These moments are at their worst when the recurring fever is with me.

I fear, reading this back, that it must appear nonsensical. You probably think that my grief has left me ‘touched’ – and believe me when I say most earnestly that I hope this is indeed the case. The madness I could live with, but I fear the dreams I can’t help but think are real. And there is something almost worse: a constant weight on my back, as if there is something just behind me I cannot quite see.

I can picture your smile of disbelief from here, and in many ways that image is a comfort. Of course I am simply a victim of illness. There can be no more to it than that. I shall throw myself into running my
father’s business, as I need a distraction from these dark thoughts, and that will certainly provide a worthy one.

I must hope that you received my first letter as I have had no reply from you – you may well, of course, still be on your travels or at the Palazzo Barbaro in Venice, where I last saw you, but as I doubt that your family business commitments would have allowed you to stay in Europe for so long, I must presume my letter was lost rather than that you have forgotten our friendship. I shall continue to write, and I hope that one day you can visit me in London, and that by then these miseries which plague me will be long forgotten.

Carl Feigenbaum, who was executed in the electric chair at New York, has left a confession with his lawyer, from which it seems possible that he may be no other than jack the Ripper. The account of the lawyer, which has been given to the Press, reads:—“l have a statement to make which may throw some light on this case [the murder for which the man was executed]. Now that Feigenbaum is dead and nothing more can be done for him in this world, I want to say as his counsel that I am absolutely certain of his guilt in this case, and I feel morally certain that he is the man who committed many, if not all, of the Whitechapel murders. Here are my reasons; and on this statement I pledge my honor:—When Feigenbaum was in the Tombs awaiting his trial, I saw him several times. The evidence in his case seemed so clear that I cast about for a theory of insanity. Certain actions denoted a decided mental weakness somewhere. When I asked him point blank, ‘Did you kill Mrs Hoffman?’ he made this reply: ‘I have for years suffered from a singular disease, which induces an all-absorbing passion; this passion manifests itself in a desire to kill and mutilate the woman who falls in my way. At such times I am unable to control myself.’ On my next visit to the Tombs I asked him whether he had not been in London at various times during the whole period covered by the Whitechapel murders. ‘Yes, I was,’ he answered. I asked him whether he could not explain some of these cases on the theory which he had suggested to me, and he simply looked to me in reply.” The statement, which is a long one, proves conclusively that Feigenbaum was more or less insane, but the evidence of his identity with the notorious Whitechapel criminal is not satisfactory
.

You will be surprised to find

that this comes from yours

If my old friend Mr. Warren is dead

remember me if you try and

was a bad one and no mistake nearly

buckled, and meant it to

be best of the lot & what curse it,

soon find it out. I mean to go

on again when I get the chance

wont it be nice dear old Boss to

have the good old times once

again. you never caught me

and you never will. Ha Ha

You police are a smart lot, the lot

of you could nt catch one man

Where have I been Dear Boss

just come back, ready to go on

with my work and stop when

you catch me. Well good bye

“The Jewes are people that are

blamed for nothing” Ha Ha

have you heard this before