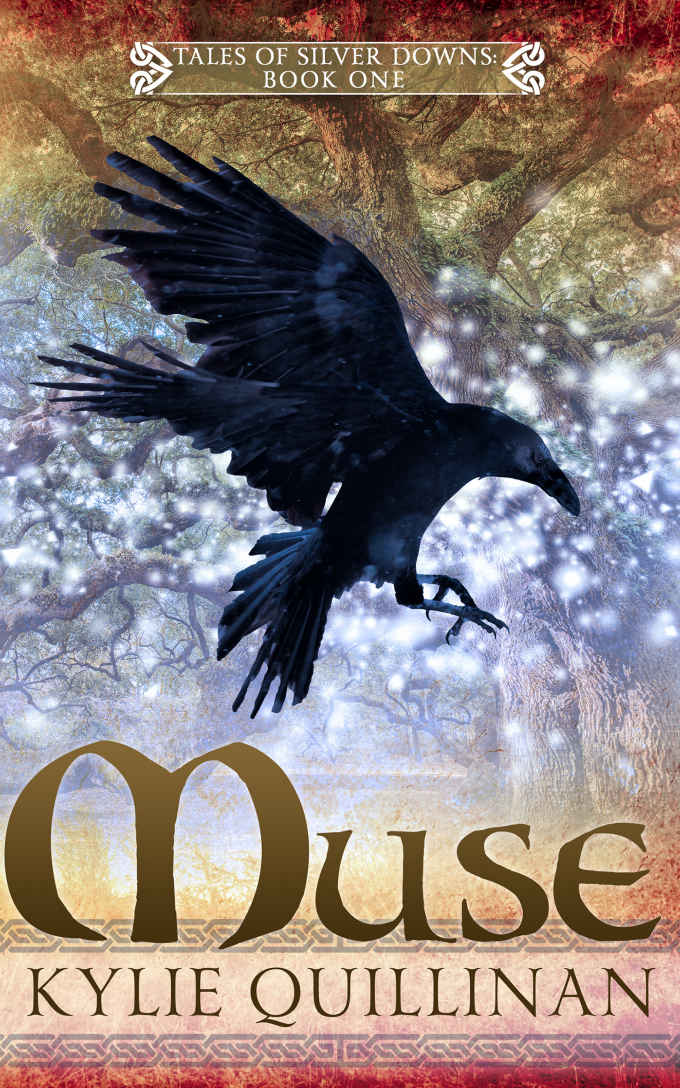 A Note From the Author

And for Muffin, Bella and Lulu,

for guarding me while I worked.

A sevennight before my brother Caedmon married, we gathered at his bride's family estate, Misty Valley. Their modest stone lodge brimmed with friends and family. Ale flowed freely and folk danced to the raucous tunes of fiddler and whistler. Winter garments — hats, coats, scarves — were piled on a bench in the corner, abandoned in the warmth of ale and dancing. I ate and drank, avoided solicitations to dance, and tried to pretend I was happy for Caedmon.

My muse, Ida, whispered snide remarks about people around us. One subject of her scorn was a man whose nose was so long and sharp Ida wondered whether he could slice bread with it. Another was the woman whose fat fingers could hardly bend to lift her mug. Had I the courage to voice such thoughts, surely the revelry would dissipate and we could all go home.

Every bard has a muse and Ida was as real as any man's, to me at least. Her image, in my mind's eye, was as clear as if she stood beside me. Blonde of hair, blue of eye, skin so pale it was almost translucent. Folk around these parts were dark-haired with milky white skin. Ida looked like no one I had ever seen. It helped me remember she didn't really exist.

As folk tired of dancing, we gathered in front of the grey stone fireplace at one end of the room. The sweet scent of pinecones on the fire filled the air, covering the lingering smells of roast meat and bread. The older folk warmed their bones on comfortable chairs drawn close to the flames. Small children perched on their laps or on brightly-coloured rugs at their feet. Those who were neither old nor young enough to claim a position close by the fire gathered behind. Some sat on wooden benches, others leaned against the walls.

I found a spot on a bench towards the back of the room. My belly was comfortably full and now that all the merriment had subsided, I eagerly anticipated the evening's tale-telling. Tonight I would make Ida proud.

Caedmon and his betrothed, Grainne, sat near the front, he with an arm around her shoulders. Both were flushed and bright-eyed, still catching their breath from the last dance. Grainne's father, Laeg, stood beside the fireplace. He was a hardy-looking man, plump and rosy-cheeked. Grainne and her three sisters all looked much like him.

"This seems a fine time for a tale," Laeg announced and the crowd swiftly quietened. "Caedmon, my boy, I believe you have a bard in the family. Is he here tonight?"

"Yes, my lord." Caedmon darted a glance at me over his shoulder, a warning in his eyes. "My youngest brother, Diarmuid, back there, is the bard."

Laeg nodded in my direction although the way his eyes searched the crowd showed he didn't know my face. "Well then, young Diarmuid, will you favour us with a tale?"

My heart pounded as I made my way to the fireplace. Laeg slapped me on the back and then stepped away to lean against a wall.

I cleared my throat.

"This is a new tale," I said. Although my voice was loud and confident, my breath quickened, for in this moment before I began, I suffered from nerves. While the tale was still unspoken, it was perfect but it would become imperfect in its telling. For a tale told never quite lived up to the promise of a tale untold. Once the words began to flow, calmness would wash over me, although I could never entirely lose myself in the tale. I was always acutely aware of every murmur and movement.

Flames crackled in the fireplace and occasionally a seat creaked. Children were swiftly hushed as I told a tale of a woman who had offended Titania, queen of the fey. The woman had a babe who was not yet four summers old. As punishment for the offence, Titania ordered the woman to take her child into the woods.

"'Go to the deepest, darkest part of the woods,' Titania said to the woman. 'And leave the child there. She will be food for the wild boar. They will rip her limbs from her body and tear out her heart while it still beats.'

"The woman cried and begged and offered her own life in exchange for that of the child. But Titania ignored her pleas, for the fey do not feel as we do and do not understand fear or sadness or pity."

By now, the mood in the room had changed. The seats creaked more often and children were not shushed quite as quickly. Discomforted, my words came a little faster.

"So the woman took her child by the hand and led her into the woods. As they made their way through the trees, the woman swallowed her sobs and did not allow her tears to fall, for she did not want the child to be afraid.

"At length they reached a clearing and as they stood in the centre, the woman knew she could not leave her child there, regardless of Titania's instructions. She resolved to keep walking, all the way through the woods. Eventually they would reach the other side. They would continue to walk until they found a town where the people did not know of the fey. But as she left the clearing, Titania suddenly appeared in front of her.

"The woman fell to her knees before the fey queen and again begged for her child's life. But she could not sway Titania.

"Eventually, with many tears and much sorrow, the woman kissed her child goodbye. 'Be brave, my sweet,' she whispered and released the child's hand. Sobbing now, the mother stepped back into the trees, for she intended to stay to witness her child's fate. On the other side of the clearing, Titania also waited.

"Only moments passed before two wild boar entered the clearing. They sniffed the air and scented the child. The child tried to run from the enormous black beasts but Titania had charmed her and she could not move her feet.

"The boars circled the child, once, twice. Then they lunged. Blood sprayed onto the leaves as they ripped the child's limbs from her body, first her arms, then when she fell down, her legs. The child did not stop screaming until they tore off her head. The mother sobbed but she did not cover her ears for she wanted to hear every moment of her child's death. She knew she would hear her daughter's screams echoing in her memory for the rest of her life.

"The boars devoured the child and even licked up her blood from the leaves. When there was nothing left, they turned and went back into the woods.

"It was only then that Titania spoke again. 'Your lesson is concluded,' she said. 'See that you have learned it well.' Then she disappeared into the woods and did not return again."

As I finished speaking, one of Grainne's relatives left, taking two small children with her. I intended to demonstrate how the fey interfere in human lives at their own whim and that they care not for what misery they bestow. That sometimes fate or circumstance or the fickle desire of the fey cuts the closest of bonds. That not all tales end happily.

I waited, shifting from foot to foot, heart pounding, for my audience's reaction. My words hung heavy in the air and folk avoided my eyes. As always.

A child began to sob. "I don't like that story, Papa," she said.

There was no point waiting for Laeg to construct some suitably polite words. As I left the room, someone finally comforted the crying child.

I took a long swallow of ale and watched as Caedmon thrust another log into the fireplace. The flames flared briefly and then settled again, a small yellow blaze warding off the chill of a winter evening. It was well after midnight when we returned from Misty Valley and the rest of our family were now abed. Caedmon and I drew our chairs within the fire's golden shield while the room beyond lay in darkness. Ida was silent for now, sleeping perhaps, if muses do such a thing, or disappointed with tonight's tale.

In the depths of the flickering fire stood a raven, its gaze fixed on me as blood dripped from its beak. I didn't recall paying much attention to ravens in my earliest years but now I saw them everywhere. In the fire, in the clouds, in the shadows, in my dreams. What they meant, I could only guess, and it was on nights like this, when dark thoughts overcrowded my mind, that the ravens were most vivid. Could I touch it if I reached into the fire, or would it disappear like smoke between my fingers? Sometimes I was tempted to try. Instead I wrapped my fingers around my mug, my skin catching on the chip on its edge. That at least was real. I was never quite sure whether the ravens were.

Caedmon settled back into his chair, his legs stretched out before him. "Stop being so morose, little brother. It wasn't that bad."

"My name is Diarmuid," I said automatically, although, for once, the fact that he never used my name didn't irritate me. I gulped down more ale even as my head spun and my stomach threatened to reject what I had already consumed. Perhaps if I drank enough, I could forget. "You don't understand. They hate my tales and, for a bard, there is nothing worse."

"So they hated one tale." Caedmon finished his ale and poured himself another from the jug on the low table between us. His hands were steady as he set the jug back down, despite the quantity of ale he had drunk with dinner.

"It's not merely one tale. It's every tale. A bard is supposed to please his audience as well as teach them, but I fail at both."

"It's because your tales are…" Caedmon paused, glancing at me as if to measure my mood.

"Go ahead. It can't make me feel any worse than I already do."

"Your tales are odd," he said, staring into the fireplace to avoid my eyes. "They're… I don't know…
wrong
. People want to hear of heroes who go on great journeys and succeed at their quests, who kill the monsters and marry the girl. You tell tales where everybody dies, villages are wiped out, mothers lose their children forever."

"I am trying to demonstrate that actions have consequences," I said somewhat stiffly, despite my assurance that his words wouldn't hurt. I tried hard not to be offended for Caedmon would never say such a thing with malicious intent. "Nobody
understands
my tales."

"That's just it. You tell tales folk have to think about, to reason through. That's not what an audience wants to hear. We want tales to cheer us, sustain us through a cold winter night. Tales of hope and victory, battle and adventure. And love."

I shot Caedmon a quick glance. He was the second oldest of my six brothers and our family's soldier son. Despite his impending marriage, I might expect to hear him talk of victory and battles, but not love.