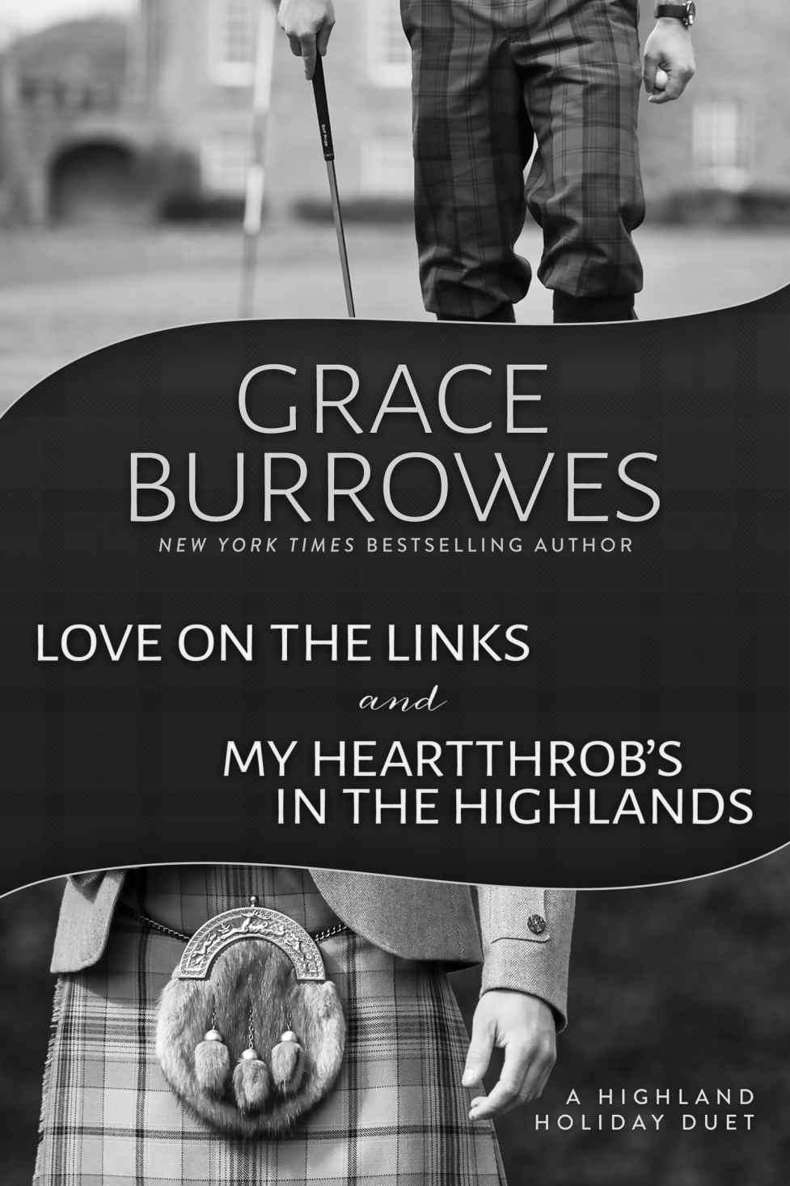 All rights reserved. No part of this book may be reproduced in any form or by any electronic or mechanical means including information storage and retrieval systems—except in the case of brief quotations or excerpts for the purpose of critical reviews or articles—without permission in writing from Grace Burrowes, author and publisher or the work.

All rights reserved. No part of this book/novella may be reproduced in any form or by any electronic or mechanical means including information storage and retrieval systems—except in the case of brief quotations or excerpts for the purpose of critical reviews or articles—without permission in writing from Grace Burrowes, author and publisher of the work.

“My Heartthrob’s in the Highlands” © Copyright 2015 by Grace Burrowes

All rights reserved. No part of this book/novella may be reproduced in any form or by any electronic or mechanical means including information storage and retrieval systems—except in the case of brief quotations or excerpts for the purpose of critical reviews or articles—without permission in writing from Grace Burrowes, author and publisher of the work.

Love on the Links

Dedicated to wonderful my nieces: Julie, Shanna, Mia, Colleen (in memoriam), Leona, Amy, Abby, Maddie and Josie. All my love, and all the happy endings, always.

The guy who was supposed to meet Julie Leonard in the lobby of an Edinburgh Hilton had been described as the quintessential aging Scottish gent.

The man prowling toward her had the walk of a federal prosecutor who specialized in violent crimes—and he hadn’t aged much past thirty.

“You’ll be Jeannie’s latest American, then?” His voice was prosecutorial as well, no wasted energy, all quiet self-possession and straight to the facts.

Julie liked that voice and she liked his straight, dark hair. Too long for courtroom fashion, the casual hair added an individualistic note to worn jeans, a black T-shirt, and faded brown corduroy jacket.

He shook her hand with a big, callused paw and no excesses of strength. “Niall Cromarty.”

The hotel lobby was a busy place. A group of women were chattering happily over by an empty hearth in what sounded like a Scandinavian language, a conversation in Italian took place between a bellhop and the reception clerk.

The gaze Niall Cromarty narrowed on Julie obliterated all the surrounding distractions, substantial though they were to an American who didn’t travel much.

Recognition hit, like seeing a defendant who closely resembled a Most Wanted poster. Julie had seen that same look from those same blue, blue eyes somewhere before.

“You’re the noticing sort, Julie Leonard. I’m not Uncle Donald, but a man can dream. Give me twenty more years of the Longmorn 18, and you won’t be able to tell Donald and me apart.”

A self-mocking smile accompanied that pronouncement, and again the sense of déjà vu assailed Julie.

“I’m not getting into a car with a guy I don’t know, Mr. Cromarty. Jeannie said she’d send this Uncle Donald, and for all I know, you’re the Edinburgh Slasher.”

He wasn’t the Edinburgh Slasher. Compared to any US city of half a million people, Edinburgh had next to no weapons crimes, but Julie was a single woman—thank God and Circuit Courts of Damson County, Maryland—and a criminal prosecutor.

Common sense was common sense. A Scot ought to understand that.

“You have your cell?” Mr. Cromarty asked.

“Then take my picture, send it to Jeannie, and she’ll vouch for me. Donald’s back went out, which it tends to do when he’s feeling stubborn. You probably have an e-mail in your queue to that effect.”

Julie had thought simply to talk to Jeannie, but a picture was a better guarantee of identity.

And who wouldn’t want a picture of this guy? He was on the tall side, six-one, six-two, and broad-shouldered without being bulky. His strength was loose, easy, and—Julie suspected—he’d be quick as hell. His eyes were the sort of blue that came from time in the sun, brilliant when contrasted with a complexion darker than Julie expected on a Scot. Now that she studied him, his dark hair had plenty of red highlights, another legacy of time in the sun.

Julie shouldered her purse and made a grab for the handle of her suitcase, but Niall beat her to it.

She took a seat at a grouping behind the happy Scandinavians, snapped a picture of Niall looking handsome, impatient, and just possibly amused, and had an answer from Jeannie nearly before she’d hit send.

“Niall Cromarty, to the life,” Jeannie e-mailed. “You’re safer with him than you would be with Uncle Donald, more’s the pity. Cheers the noo! Jeannie.”

“Jeannie says you bear a resemblance to a guy she dated briefly at university. He was a mouth breather. I’m not to go anywhere with you.”

Not by the twitch of an eyebrow did Niall show a reaction.

He resumed possession of Julie’s suitcase handle. “We believe in retribution here in Scotland, have made an entire history of it, in fact. This is your only warning, and Jeannie didn’t date at university.”

He extended his free hand down to Julie, a challenge masquerading as a courtesy. His features were as stern as the granite-built city where they’d met, but his eyes were laughing. Julie accepted his assistance to get to her feet—jet lag was a bitch—and let him hold doors for her until they’d bundled into his Volvo and were tooling through the busy streets.

“How long until we get to where we’re going?” Julie asked.

“I do most of life on a schedule,” Julie said, yawning. “This is a working holiday, and if Donald’s back is out, then my plans are disrupted. I’m here to perfect my golf game, not swill whisky and tour castles.”

Their route took them over a body of water, a big red bridge to the right. Beyond that bridge, a steel-blue North Sea shimmered off to a pewter horizon.

“You don’t perfect your golf game in two weeks,” Niall said. “Not in two lifetimes. Donald will be up and about in a day or two. Until then you’re stuck with me.”

No ring, a sense of humor, and a gunslinger’s walk. Maybe life after a crappy divorce held a few pleasures after all.

Niall Cromarty did not like lawyers—they didn’t play golf, they played
at
golf, most of them—but he was fond of women, despite how troublesome they could be. Julie Leonard had trouble written all over her.

Any sane person would catch a nap after an Atlantic crossing—in biological time, Niall’s passenger was awake at six in the morning after having stayed up all night. Julie Leonard was studying the surroundings as if the North Sea was one of the wonders of the known world.

“I assume you’ll want to rest this afternoon.” Niall did not make it question because he wanted
his
afternoon free, and damn Jeannie for playing the familial guilt card.

Julie was an attractive woman in a blond, put-together way. Even after traveling through the night, her hair was in a tidy bun, and a crease ironed into her jeans was evident below the knee. Her green silk blouse was a bit wrinkled, though her beige blazer was spotless, and her perfume—a grassy fragrance with hints of pine—was tantalizingly fresh.

The golf courses along the shore bore a hint of those same scents in spring.

“You might find once we reach your destination that the fatigue hits you like a shore-breaking wave,” Niall said. “Then too, airplanes are notorious incubators for respiratory ailments.”

He’d been on enough airplanes to be an expert on their hazards.

“I’m healthy as hell,” Julie said. “Comes from being around the incarcerated population, which tends to be sickly. Care for a piece of gum? It has caffeine in it.”

Niall took the package from her and stuffed it in his inside jacket pocket. “Don’t be daft. Half the reason people come down with colds after they travel is because they shortchange themselves on sleep. Scotland will still be here after you have a wee nap.”

Julie Leonard was pretty when she was plotting revenge. Her mouth was a lush, rosy pair of lips made for smiling, and the harder she worked to suppress that evidence, the more Niall enjoyed watching her.

“Give my gum back, Mr. Cromarty, or I’ll tell Jeannie you’re stealing from her guests.”

Niall turned off the M90, though a detour meant his afternoon was effectively shot whether Julie Leonard admitted exhaustion or not.

“Jeannie is a relatively new mother,” he said, “and a single mother now that she’s run off that—a single mother. She’s well aware of the dangers caffeine products present to young children. I hope you are too.”

A drawing down of blond brows suggested this was news to Miss Leonard. Her brows weren’t symmetrical. The right swooped a bit more than the left, giving her a skeptical air when she frowned.

The day was going straight to hell, but many of Niall’s days took that direction.

“If you need energy, then we’ll get some decent tucker into you. It’s not like you’re carrying any extra meat on those bones. Despite plunderings by the Vikings and English, Perth hasn’t gone anywhere for centuries.”

Julie Leonard was quite trim, though well-endowed. Niall suspected the trimness was an effort not to add to her well-endowed aspects. Women were daft, and American women among the most daft—also the most fun, when they allowed themselves to be.

She used that tone of voice as if Niall were three years old and plagued by a guilty conscience—which he was not, not about this.

“Mr. Cromarty was my grandfather. It might have escaped your notice, madam, but I am a human being, the hour approaches noon, and it’s just possible
I
am hungry. I suspect in your schedule and itinerary, you neglected to plan for meals.”

Another frown, slightly puzzled, as if eating regular meals was a custom practiced only by those quaint Scots.

“Your belly isn’t aching, perhaps, but what about your mind? Sharp as a whip, are you? Does your head throb a bit? A general ache in the joints plaguing you? Irritability and poor recall? You’re hungry.”

“I’m—” She hefted her shoulder bag about on her lap, the gesture worthy of any put-upon granny. “I’m tired, is all. Good gracious, look at the flowers. Stop the car.”

Between one sentence and the next, Julie Leonard became a different woman. She went from ignorant of her own bodily needs to awestruck by the scenery. They were passing through one of the dozens of villages decorating the Fife countryside, and even in early spring, the more ambitious shop owners had pots of flowers adorning windowsills and stoops.

Shiloh by Shelby Foote
Venice Vampyr - The Beginning by Folsom, Tina
Where Did It All Go Right? by Andrew Collins
Sweeney Astray by Seamus Heaney
Anytime Tales by Blyton, Enid
A Corpse in the Soup by Morgan St. James and Phyllice Bradner
Flirting With Intent by Kelly Hunter
Lady and the Wolf by Elizabeth Rose
In the Beginning...Was the Command Line by Neal Stephenson
Nightingale's Lament by Simon R. Green