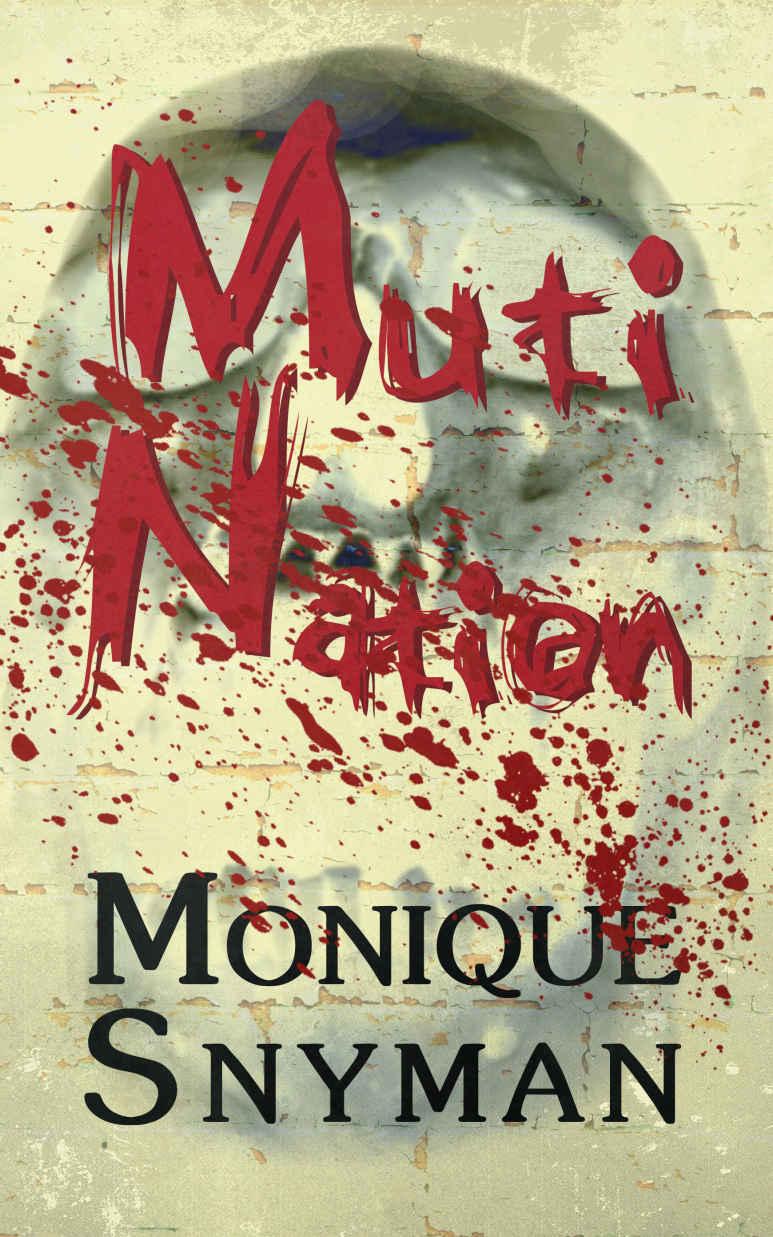 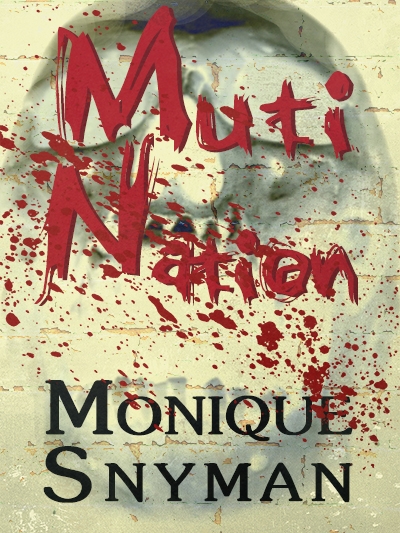 All rights reserved. No part of this book may be reproduced or transmitted in any form or by any electronic or mechanical means, including photocopying, recording or by any information storage and retrieval system, without the written permission of the author and publisher o
mniumgatherumedia.com

This book is a work of fiction. Names, characters, places and incidents are either the products of the author’s imagination or are used fictitiously. Any resemblance to actual events or persons, living or dead, is coincidental.

For Manus: Who finds a way to guide me to the light, even in the darkest of times.

The problem is the misinterpretation of what a sangoma is. A sangoma is not a witch—a sangoma is pure and does good. People, due to their lack of knowledge, think witchdoctors, witches and sangomas are all the same thing and they are not.

The burnt orange skies illuminate the world in a warm glow as dusk comes to a close. Several stars already shine against the romantic evening backdrop, where orange turns to mauve and then to navy blue. Tonight the moon has a Cheshire cat quality to it, and I feel like Alice in Wonderland—or more accurately, like Esmé in Death Valley. Long yellow grass reaches up to my hips as I push my way through the open veld between WF Nkomo Street and the Magalies Freeway. Blue and red lights flash on top of the police cars at timed intervals where they are parked at the Sasol garage, on top of the hill. An eerie sound—a warped version of Mandoza’s up-beat hit
Nkalakatha
—drifts through the area as a taxi drives past the veld. Someone else honks in approval. Then there’s just the lull of traffic, the chirping crickets, and the rushing water of the swelled Skinnerspruit to drown out the silence.

Several uniformed police officers are standing ahead. Some look bored, but it’s a façade of bravado. Others wear a tinge of green around the cheeks, a perfectly normal response. A few are talking in hushed tones in languages I can’t understand. And then there are the two teenagers who’d called it in. The blonde girl is huddled up in the boy’s arms; she’s a blubbering mess. Tears and mucus streak her otherwise pretty face, knotted hair sticks to her skin where the day’s heat still clings against her small form. She’s trembling, but nobody can blame her. The boy looks in better shape, though not by much. He’s pale and staring into the distance, maybe wishing he could relive today. Perhaps he wishes he’d taken his girl to another secluded field for some “alone time” instead.

God knows this wouldn’t have been my choice of veld for an outdoor quickie.

Le parfum de la mort
, the unforgettable fragrance of decay and faecal matter, wafts through the air like cheap perfume. My stomach churns in disagreement, but I keep my lunch down like a professional. The atmosphere is thick with despair, almost palpable, and even the least superstitious police officers can feel it. Something bad happened here. Something most South Africans, regardless of race, religion, intellect and profession don’t acknowledge out of fear.

“You again,” Detective Mosepi, a robust middle-aged man with a brusque temper, asks gruffly when I near him. He glances back to his notepad and scribbles something down. “Not wearing our Gucci heels today, hmm? Good thing, too. I know how women get when they ruin those expensive shoes.”

Detective Mosepi is good at his job. With a single glance, he can recount every detail of a person’s attire. He sees evidence when others deem the find inconsequential. His memory isn’t too bad either.

I’ve known him most of my life.

My father and he worked at the same precinct until Dad’s retirement from the force a few years ago. Back then Detective Mosepi was energetic and ready to change the world for the better, but the job ate away at his soul, like it does to most cops.

I give the scene a fleeting look, curious about what lies beyond the shrubbery and uniforms.

“Enjoying the new job, sir,” I answer. People always ask and the answer never changes. Dad’s more alive now in an accounting office than when he thought he had a calling at the South African Police Service. My Dad’s not
that
old, he’s only forty-six, so he’s not reached his golden years yet. The force didn’t agree with him, though.

A shadow of a smile crosses Detective Mosepi’s face, probably as he recalls fond memories of having my father as a partner.

“What’s the story here, Detective?” I ask to get the ball rolling.

“Those two,” he gestures to the teenagers a way away, “were up to no good in the grass when they found the victim about an hour ago. The victim is a black female in her mid-twenties.”

I raise an eyebrow in question, which makes him sigh in defeat.

“Possible rape, definite mutilation and murder. The usual stuff you’re called out for.”

Detective Mosepi is uncomfortable. I can see it in his body language and eyes. I don’t blame him or anyone else for feeling odd. These types of cases tend to make police curt and impolite. But then, I need more to go on if I’m going to do my job.

“Is the forensics unit coming?”

“Maybe, but don’t bet on them being any help. You know we don’t have the funding for fancy CSI gadgets.”

I nod because it’s true. The forensics team only comes out for prolific cases and this murder wouldn’t make the local newspaper’s headlines if reporters were informed of the true nature of the case. It’s much too sensitive for the media, the government, and the people.

“Have you found any identification for the victim?”

Detective Mosepi looks over his shoulder and barks out a command in isiZulu. An officer shouts something back, before the detective turns his attention to me again.

“They bagged a purse, which might’ve belonged to the victim. I’ll send you the details later, after processing,” he says.

He huffs, pockets his notebook, and heads toward the shrubbery. “Come on, let’s get this over with.”

I’m already behind him, stepping where his feet have landed, and readying myself for the inevitable shock. Even though I’d seen dozens of homicide victims in the past few years, each one remains unique. Dad used to drag me along to his crime scenes when I was a kid, much to my grandfather’s dismay—so I know what’s coming once I’m past the shrubbery. I fish my cell phone out of my purse and search for the audio recording app I’ve downloaded to capture initial thoughts and ideas.

Detective Mosepi steps out of the way when we reach the taped-off area. The rest of the hovering officials clear out so I can do my quick investigation, and I’m left with the full, grotesque picture.

It takes me a moment to mentally shake myself into action.

“Esmé Snyders, Occult Crime Expert, Case Number 137. It is approximately 18:00 hours on Friday, 4 September 2015,” I say to my phone as I move around the border of the crime scene. “The victim is a black female, aged between twenty-six and thirty years. Height is average, at around 1,70 meters, and weight is about 85 kilograms. Clothing includes a turquoise peplum top and matching pencil skirt—cut off and discarded roughly two metres from the body—as well as black underwear and a pair of black open-toe heels.”

The woman’s nude form looks like it’s been exposed to the elements for a couple of days judging by the insect activity surrounding the body; but I could be wrong. I’m not an entomologist. She’s sprawled on her back; the extent of misery she was forced to endure in those last few minutes—or hours—on display for all to see. And with those empty eye-sockets and her slack jaw, the woman’s expression is frozen in a silent scream. I can’t become too emotionally involved though, not if I want to stay sane. So I push away my emotions, however heartless it may seem, and continue in a monotonous voice.

“Breasts and genitals have been removed, presumably pre-mortem. Defensive lacerations on her palms may confirm theory. DNA evidence of assailant or assailants might be present underneath fingernails. Eyes, tongue and lips are also missing.”

I walk around the body again, studying the evidence as much as possible underneath the single spotlight, erected nearby.

“Further investigative information is required to determine whether the victim is, beyond a reasonable doubt, another muti-murder fatality. The preliminary evidence, however, is overwhelming.”

I stop my recording, take a few pictures of the scene as well as the victim for my records, and make my way back to where Detective Mosepi is waiting with the kids.

He gives me a worried look, but doesn’t ask the question I know he’s dying to ask:
Are you okay?

I don’t know. I’ve seen worse, but it doesn’t get easier. Every victim suffers in ways I can’t possibly comprehend. It is part of the ritual: the more they suffer, the more potent the ingredient will be for the witchdoctor’s magic. Of course, murder isn’t always the intended outcome, but the victims’ wounds are usually of such a nature that death is, more often than not, imminent.

“This is Mina van der Schyff and Adhir Ibrahim.” He introduces the teenagers who found the body when I reach their location.

They still look like their worlds have ended, but at least the girl has stopped crying.

“I’ve notified their parents of their whereabouts and we’ll take them in for questioning, but I don’t think we’ll get anything useful out of them tonight,” Detective Mosepi whispers to me.

I nod in agreement.

“Do you want to sit in on the interview?”

“It’s not necessary; just send me their details with the rest of the files,” I whisper back. “But I would like to read the victim’s family and friends’ statements. If you can arrange it for me, I’ll owe you one.”

The detective glances over my shoulder, looks back at me, and nods. “I’ll walk you back to your car.”

I begin to protest, but the look he gives me says not to bother. I swallow my words and make my way back to the Sasol garage where I’d parked alongside the police vehicles. We walk in silence until we’ve distanced ourselves from the activity.

He steals a look again. “It’s getting worse, isn’t it?”

“The ritual murder rate has risen, regardless of the official statements the government releases. Yes.”

I grit my teeth. The statistics aren’t pretty, not by a longshot. As I am one of the few occult experts on the continent, I get to see the majority of the violent crimes committed. It’s become a pandemic of sorts, and
everyone
is at risk, but nobody talks about it. My silence answers his question.

Enemy in the Dark by Jay Allan
Tabitha in Moonlight by Betty Neels
Caress The Dark God [Scions of the Ankh 2] (Siren Publishing Classic) by Toni L. Meilleur
The Laying on of Hands: Stories by Alan Bennett
Brown, Dale - Patrick McLanahan 06 by Fatal Terrain (v1.1)
Tears Are for Angels by Paul Connolly
Revolution World by Katy Stauber
Deception and Desire by Janet Tanner
Dinosaurs & A Dirigible by David Drake
Chase by Jessie Haas