Read My Life Next Door Online

My Life Next Door 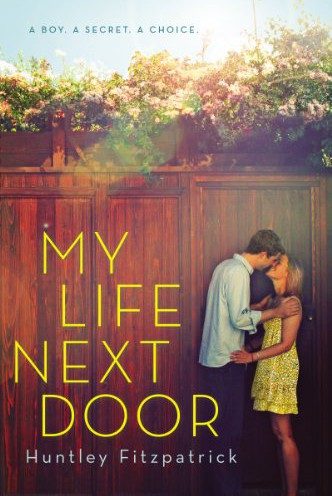 Published by The Penguin Group

All rights reserved. No part of this book may be reproduced, scanned, or distributed in any printed or electronic form without permission. Please do not participate in or encourage piracy or copyrighted materials in violation of the author’s rights. Purchase only authorized editions.

The publisher does not have any control over and does not

assume any responsibility for author or third-party websites or their content.

My life next door / by Huntley Fitzpatrick.

Summary: When Samantha, the seventeen-year-old daugher of a wealthy,

perfectionistic state senator, falls in love with the boy next door, whose family is large, boisterous, and just making ends meet, she discovers a different way to live, but when her mother is involved in a hit-and-run accident Sam must make some difficult choices.

Of course, to Colette Corry.
The words “best friend” will never say enough.

The Garretts were forbidden from the start.

But that’s not why they were important.

We were standing in our yard that day ten years ago when their battered sedan pulled up to the low-slung shingled house next door, close behind the moving van.

“Oh no,” Mom sighed, arms falling to her sides. “I hoped we could have avoided this.”

“This—what?” my big sister called from down the driveway. She was eight and already restless with Mom’s chore of the day, planting jonquil bulbs in our front garden. Walking quickly to the picket fence that divided our house from the one next door, she perched on her tiptoes to peer at the new neighbors. I pressed my face to the gap in the slats, watching in amazement as two parents and five children spilled from the sedan, like a clown car at the circus.

“This kind of thing.” Mom gestured toward the car with the trowel, twisting her silvery blond hair into a coil with the other hand. “There’s one in every neighborhood. The family that never mows their lawn. Has toys scattered everywhere. The ones who never plant flowers, or do and let them die. The messy family who lowers real estate values. Here they are. Right
next door. You’ve got that bulb wrong side up, Samantha.”

I switched the bulb around, scooting my knees in the dirt to get closer to the fence, my eyes never leaving the father as he swung a baby from a car seat while a curly-haired toddler climbed his back. “They look nice,” I said.

I remember there was a silence then, and I looked up at my mother.

She was shaking her head at me, a strange expression on her face. “Nice isn’t the point here, Samantha. You’re seven years old. You need to understand what’s important.
Five
children. Good God. Just like your father’s family. Insanity.” She shook her head again, rolling her eyes heavenward.

I moved closer to Tracy and edged a fleck of white paint off the fence with my thumbnail. My sister looked at me with the same warning face she used when she was watching TV and I walked up to ask her a question.

“
He’s
cute,” she said, squinting over the fence again. I looked over to see an older boy unfold himself from the back of the car, baseball mitt in hand, reaching back to haul out a cardboard box full of sports gear.

Even then, Tracy liked to deflect, to forget how hard our mother found being a parent. Our dad had walked away without even a good-bye, leaving Mom with a one-year-old, a baby on the way, a lot of disillusionment, and, luckily, her trust fund from her parents.

As the years proved, our new neighbors, the Garretts, were exactly what Mom predicted. Their lawn got mowed sporadically at best. Their Christmas lights stayed hung till Easter.
Their backyard was a hodgepodge of an in-ground pool and a trampoline and a swing set and monkey bars. Periodically, Mrs. Garrett would make an effort to plant something seasonal, chrysanthemums in September, impatiens in June, only to leave it to gasp and wither away as she tended to something more important, like her five children. They became eight children over the years. All approximately three years apart.

“My unsafe zone,” I overheard Mrs. Garrett explain one day at the supermarket when Mrs. Mason commented on her burgeoning belly, “is twenty-two months. That’s when they suddenly aren’t babies anymore. I love babies so much.”

Mrs. Mason had raised her eyebrows and smiled, then turned away with compressed lips and a baffled shake of her head.

But Mrs. Garrett seemed to ignore it, happy in herself and content with her chaotic family. Five boys and three girls by the time I turned seventeen.

In the ten years since the Garretts moved next door, Mom hardly ever looked out the side windows of our house without huffing an impatient breath. Too many kids on the trampoline. Bikes abandoned on the lawn. Another pink or blue balloon tied to the mailbox, waving haphazardly in the breeze. Loud basketball games. Music blaring while Alice and her friends tanned. The bigger boys washing cars and spraying each other with hoses. If not those, it was Mrs. Garrett, calmly breast-feeding on the front steps, or sitting there on Mr. Garrett’s lap, for all the world to see.

“It’s legal,” Tracy, future lawyer, always countered, flipping back her platinum hair. She’d station herself next to Mom, inspecting the Garretts out the big side window of the kitchen. “The courts have made it absolutely legal to breast-feed wherever you want. Her own front steps are definitely fair game.”