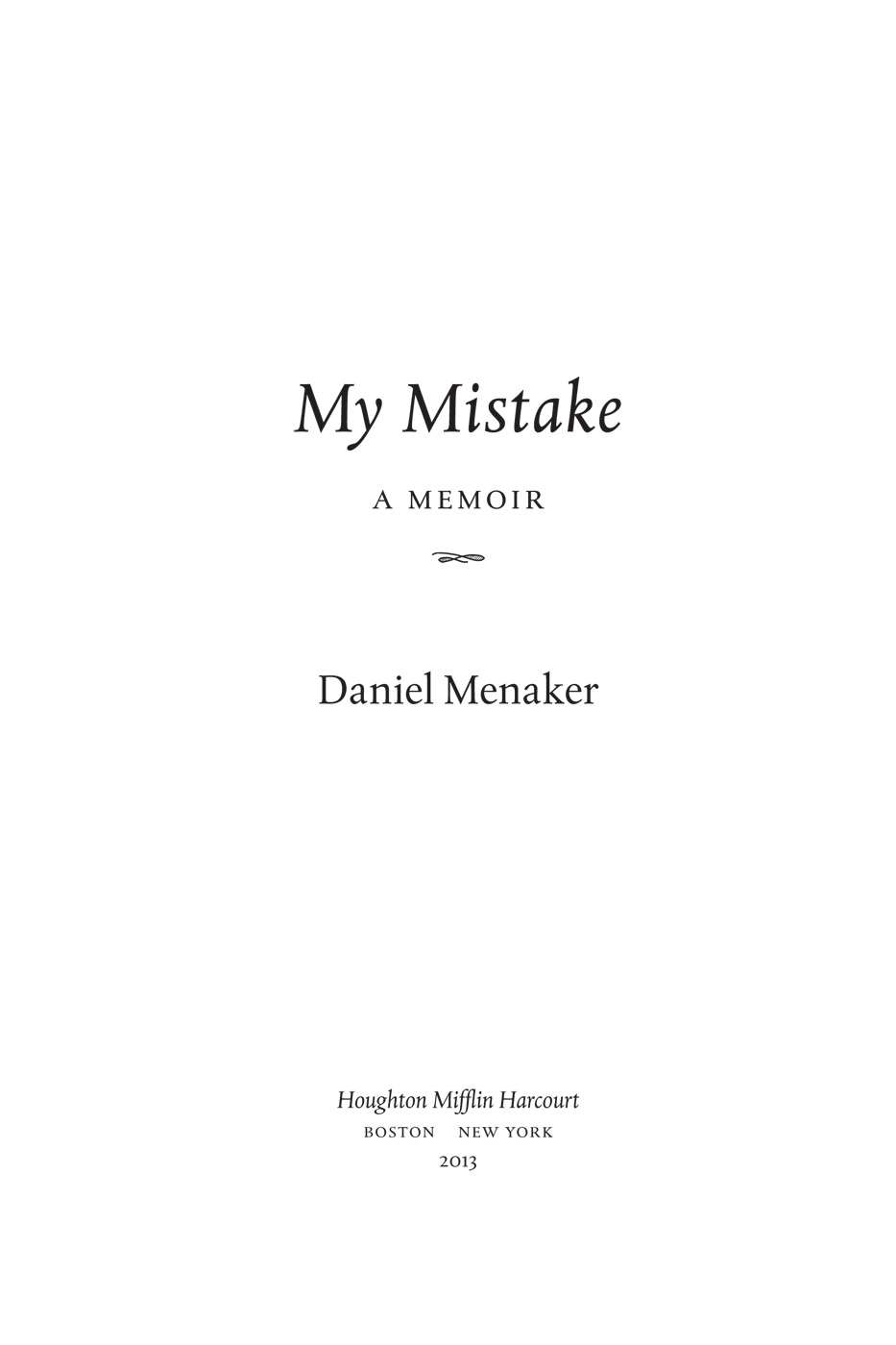 Isn't This Scientific?; The Sugar

I am grateful to the following people for permission to quote from unpublished correspondence: Alice Munro (letters), Wallace and Allen Shawn (a note to me from their father, William Shawn), and Ellen Brodkey (a note to me from her husband, Harold Brodkey).

The names of some individuals in this book have been changed, out of respect for their privacy.

In loving memory of
THEAREATHA ROGOWSKI

M
Y GODFATHER INVESTIGATED
my father for the FBI and had a scar on the palm of his left hand from a machine-gun bullet shot by Baby Face Nelson. My uncle had “Frederick Engels” for first and middle names. My father went to Mexico and spied on Trotsky for the Communist Party of the United States. My father's forebears were, according to an Orthodox Jewish camera dealer on West 45th Street, an important clan of Talmudic rabbis descended from King Solomon. (The man asked me if I was Jewish, and I said “Half,” and he said “Your mother?,” and I said “My father, pretty obviously,” and he sort of waved away my claim to Jewishness, and I said, “It would have been good enough for Hitler.”) My mother was an editor at
Fortune
when few women were editors. She could trace her lineage to William the Conquerorâif she cared about that kind of thing, which she didn'tâand helped to establish the Newspaper Guild at Time, Inc. I attended the most prominent progressive (“Commugressive” was the neologism of a contemporary right-wing screed) private school in the United States, the aptronymic Little Red School House, on Bleecker Street in Greenwich Village, during the 1940s, when Leadbelly and the Weavers were singing at the Village Vanguard. Another of my uncles, Peter Lavrov Menaker, owned a leftist boys' camp in the Berkshires attended by William Gaines, founder of
Mad
magazine, and Victor Navasky, Publisher of
The Nation,
with a camp song written by its music counselor, Frank Loesser, the composer of the music and lyrics for
Guys and Dolls.
I was taught to play the guitar by one of the sons of Julius and Ethel Rosenberg. I captained Swarthmore College's varsity soccer team to a 2â10 record, and I bought the first Bob Dylan album right when it came out because I thought the musician was a Welsh folksinger. My mistake, but a good one.

My brother died when he was twenty-nine after surgery for an injury that I caused.

I worked for twenty-six years in the brilliant crazy house called
The New Yorker
âwhere a man stood in the middle of the hall and said, loudly, “I am the greatest metropolitan reporter alive”; where a film critic regularly passed out drunk during movie screenings; where the Editor, William Shawn, a kind of genius, fell psychological prey to three or four short women who managed to get their hooks into him; where one of the cartoonists did his laundry in the men's room; where the succession politics that swirled around Shawn rivaled those of the papal succession in the eleventh century; where one of those successors, a smart, incredibly hard-working, but dizzy person, asked me if Jews would throw bagels at her if the magazine published an Art Spiegelman cover showing a Hassid kissing a black woman. She said I was the only Jewish editor she could find in the office.

I went on to work for fifteen years in book publishing, where my first boss, the husband of the potential bagel target, kept exhorting me to “eat like a moonkey.” I also acquired a novel,
Everyone's Gone to the Moon,
by Philip Norman, about British journalism, which portrayed that (fictionalized) same boss in unflattering termsâacquired it because, as the boss put it, “I wouldn't want anyone else to pooblish this book, would I?” Hold your enemies close.

Later on, I made an offer for a book that I knew was too low in order to avoid working a second time with the writer in question, because he
could not stop talking.
I dreamed up the title
Primary Colors.

Finally, Introduction-wise, I was diagnosed with lung cancer at the age of sixty-six and had a lobectomy and then a recurrence of the cancer in the remainder of my left lung. I have been treated with chemotherapy and futuristic radiation therapy and have just now had my fourth “clean” CT scan as I write this very sentence. The cancer led me to consider writing this book and in that way take stock of my lifeâat least my childhood and youth and professional lifeâand try to make sense of it. This latest scan has re-introduced me to a cancer patient's best friend: NED. No Evidence of Disease. But there's no telling how long he'll be hanging out around here. “Scan-to-scan anxiety is real,” my oncologist told me. “Thanks, Doc,” I said to myself.

Cancer can, at least for a while, have some benefits. It allows you to dodge onerous commitments. It strengthens friendships. It prevents you from taking good things for granted. It increases the urgency of parts of your life and shows up the trivialities. It requires you to find your courage.

(As told by Theareatha Rogowski, who took care of me and my brother, Mike, three years older, while my mother worked at
Fortune
magazine and my father worked, usually fecklessly, as an exporter.)

Danny, you was so sick. You couldn't keep anything down. Or it would be the other end. You looked like a little bunch of sticks with a bellybutton. They had to take you to the hospital. Your father said to me, “Readie, say goodbye to Danny. You won't be seeing him again.” But I knew you was going to be all right. I just went and prayed that you would be all right and I knew you would be, but you was in that hospital for two months. We couldn't even visit you for more than an hour each day. That's the way it was back then.

Two and a half

I am playing in the driveway of my uncle Enge's house in New Marlborough, Massachusetts. My father, Robert Owen Menaker, is the youngest of seven. His siblings are George Menaker (no middle name), Frederick Engels Menaker (Uncle Engeâ“rhymes with mange,” he likes to say), William Morris Menaker, Peter Lavrov Menaker, Nicholas Chernechevsky Menaker, and Leonard Aveling Menaker. Their parents, Solomon and Fannie Menaker, came from Vilna and Odessa. They never married, out of a conviction that marriage was a form of oppression by the state. (More than half a century later, among Uncle Enge's papers, I was to find an essay about my grandfather by a visitor to his textile plant. “I know not what exact philosophy this gentleman of the people follows, but he treats those who toil in his factory with the greatest respect and financial rectitude,” the visitor wrote. “There can be no doubt that he is a man of the people, and the fire of Revolution burns in his eyes.”)

Enge owns a Guest Camp on Lake Buel, a few miles from his farmhouse. It's mainly for parents of the boys who go to Uncle Pete's camp, To-Ho-Ne, just north of the Guest Camp. To-Ho-Ne is the camp's Native American name. It means “Here will we camp.”

The driveway of the farmhouse. It's summer, and Uncle Enge's rust-colored Chow-mix, Timmy, is looking out for me. I'm sitting on his back, pouring dirt and gravel over his head from a small tin bucket. I see a car go by slowly and pull into the grass parking area across the road from the house. A nice-looking man with wavy gray-and-brown hair gets out, crosses the road, and starts up the driveway.

He stops in front of me. “Where is your father, little boy?” the man asks me.

“In Souse America,” I am said to have said. (I clearly recall the moment but not the content of the dialogue; my parents will tell me about it laterâmany times, and with amusement.)

Joe is mixing cement for my uncle in the farmhouse driveway. He's pouring water from a bucket into a tub. Joe is Joe Rogowski, a Polish immigrant laborer with almost incomprehensible English, who works for Enge in the summer and has taken a liking to Readie, who watches out for me and Mike up here while my parents stay in New York. They visit on weekends. How Joe landed here I have no idea. He leaves the tub of cement for a few minutes, and my brother, Mike, seven, tells me I can help Joe by picking up the bucket and pouring more water into the cement mix. I do that. Joe comes back, gets furious, and spanks meâthe first and last time I have ever been spanked. Readie is very angry at him. “Don't you
ever
hit my baby, Joseph Whateveryournameis,” she says.

Even while I am being spanked, and am crying, I am fascinated by the two half-fingers on Joe's right hand. He cut the other halves off while using a power saw.

Later, Joe is sitting on the porch while my uncle and some friends are talking about traveling. My uncle says, “It's true that the last mile home is the longest. When I get to the train station in Great Barrington, it seems to take forever to get up here to the farm. And then there's so much work to do when I get here.”

“What are you saying, Joe?” Enge says.

This continues to be a puzzlement. Enge asks him again what he's trying to say.

Ah! No such thing as longest miles. Quite right. But the real understandingâwhat I know now, at seventy-twoâis how unusual it was for Joe, the handyman, to sit in on our discussions. He felt welcome. He was welcome. Enge has told me that my grandfather Solomon, who for a while ran a textile factory in New Jersey on Socialist principles, always had workers at the family table. The Workmen's Circle awarded him a trophy cup, which sits on a shelf in my uncle's house, which will, many years in the future, be my house.

My parents send my brother and me up here to the country with Readie to escape the polio epidemics in the city and also, as I will learn later, so that they can live it up. At the end of this particular summer, I go home to Barrow Street, in Greenwich Village, and I see footprints on the ceiling. I ask my father whose they are, and he says, “Your mother's.” I ask how they got there, and he says, “When your mother has a little too much to drink, she can fly.”