Read My Mother Got Married Online

My Mother Got Married 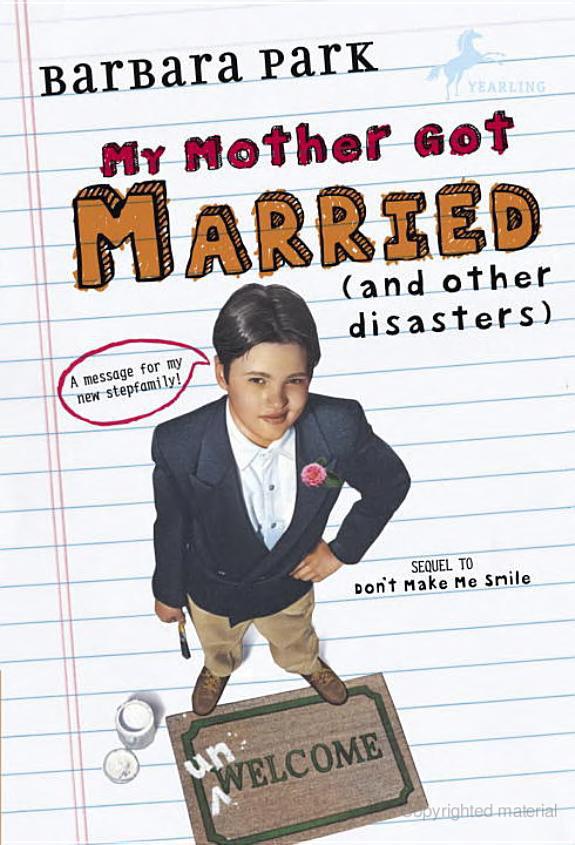 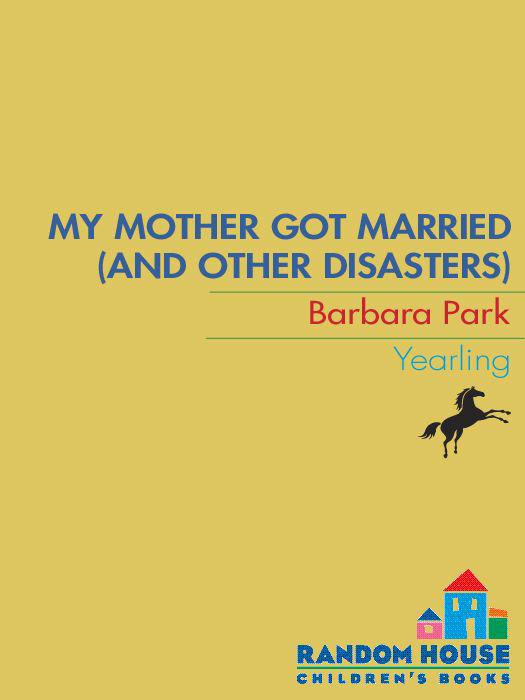 For more than forty years, Yearling has been the leading name in classic and award-winning literature for young readers.

Trust Yearling paperbacks to entertain, inspire, and promote the love of reading in all children.

OTHER YEARLING BOOKS
YOU WILL ENJOY

ALL ABOUT SAM,
Lois Lowry

THE KID IN THE RED JACKET,
Barbara Park 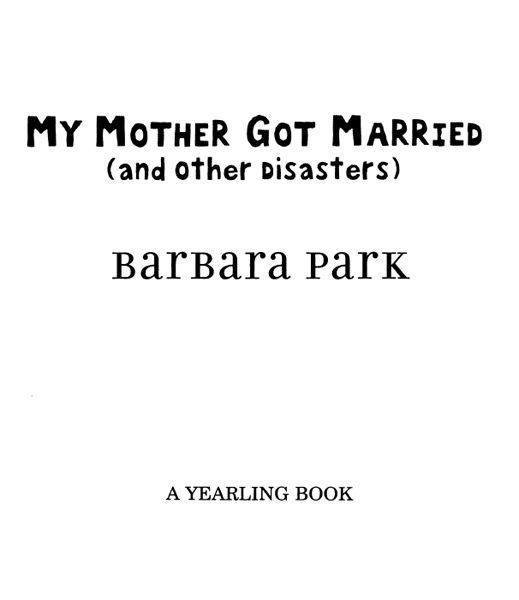 All rights reserved. No part of this book may be reproduced or transmitted in any form or by any means, electronic or mechanical, or by any information storage and retrieval system, without the written permission of the publisher, except where permitted by law. For information address Random House Books for Young Readers.

Yearling and the jumping horse design are registered trademarks of Random House, Inc.

Visit us on the Web!
www.randomhouse.com/kids

To my friend and editor,
ANNE SCHWARTZ,
who smooths all the rough edges,
and lets me take all the credit
—
B.P
.

Y PARENTS are divorced. There’s no way to make it sound nice. They’re divorced, and that’s that.

I live with my mother, but I’m shared with my dad. It’s called joint custody. It means they both want me to know that they both want me. I stay at Dad’s every other weekend and on holidays and whenever else I want to. He moved into a new apartment a few months ago. It doesn’t smell as bad as his first one did.

Mom and I got to remain in the house, so at least something stayed the same. The only thing that changed was our hallway. We used to have family pictures from one end to the other. But after the divorce my mother put them away in the attic. Not all at once. Little by little, like the three of us just sort of faded off the walls.

I still go up there and look at them sometimes. She doesn’t know it, but I do.

A few weeks ago my mother put a picture of Ben on the bookshelf. Ben Russo. A man who’s not my father. The picture’s in a silver frame. Ben’s smiling. So far I haven’t smiled back.

My mother met Ben last summer a few weeks after the divorce was final. She was backing our car out of the driveway when she smashed into the side of his truck. We were both wearing our seat belts, so neither one of us was hurt. Ben was planting a tree in our neighbor’s front yard, so he wasn’t hurt either.

When he saw the dent, he didn’t jump up and down or wave his fists in the air or anything. He just put down his shovel, walked over to our car, and peered in the window.

My mother was sitting there, slumped over the steering wheel. She was saying the “s-h” word. Not loudly. Just sort of whispering it over and over again to herself.

I got out of the car. “She’s okay,” I assured him. “She always does this when she crashes into something.”

Suddenly my mother opened her door and got out.

“Could we please not act as though I do this every day, Charles?” she snapped, her voice sounding shaky. “I’ve been driving for twenty-one years and this is my first accident, okay?”

I thought it over a second. “What about last year when you ran over my bike?” I reminded her. “And then there was that light pole at Dunkin’ Donuts.”

My mother threw her hands in the air. “
Make a list for the man, why don’t you
!” she shouted at me. “
How about telling him all the things I’ve sucked up in the vacuum cleaner while you’re at it
!”

I don’t know why Ben smiled, but he did. Then he got the name of our insurance company and went back to digging his hole. The next day he brought my mother a free tree from his plant nursery.

“Trees help calm your nerves,” I heard him explain as he carried it around to the backyard to plant it.

That’s all it took. One free tree and they started dating. I couldn’t believe it. No chocolate, no flowers—just a dumb little tree and my mother started acting as goofy as a teenager. Every morning she’d hurry out back to water it. Then she’d sigh and say, “Wasn’t that nice of him?” Seriously. She said it about a billion times.

The weird thing is that Ben Russo is just about as different from my dad as you can get. He looks like one of those nature guys. You know, the kind you see in commercials walking through the woods swinging an ax and eating acorns and wild berries. He has a beard and wears boots and a belt with a big turquoise buckle. Ben Russo would look comfortable walking around in a lumberjack shirt with a squirrel on his shoulder.

My dad is more the suit-and-tie type of man. If you put a squirrel on my father’s shoulder, he’d probably run around screaming, “Get it off! Get it off!”

He tried eating a wild blackberry at my grandmother’s house once. As soon as it was in his mouth he spit it out and ran inside to get a drink of water.

Ben has two kids. A teenage girl and a little boy. His wife died, so I guess he sort of got stuck raising them by himself. I know it sounds sad, but that doesn’t mean I automatically have to like him.

I don’t exactly understand what my mother sees in him anyway. Ben hardly ever talks and when he does, it’s usually real soft and quiet. What’s so exciting about hanging around a dull guy like that?

It’s hard, you know? Watching your own mother start to like a man who’s not your father. A guy who sells trees instead of insurance. A man who doesn’t know your birthday or your middle name or where your room is. It sort of makes you queasy, if you want to know the truth.

Besides, I just always thought I’d be all the family my mom would ever need. Even with Dad gone, the two of us still had a good time together.

Like sometimes on Saturday mornings we’d go to the World of Waffles and she’d let me order the kind with strawberries and whipped cream. When we first started going, I was a little self-conscious. I kept thinking people were staring at me, wondering why there wasn’t a dad with us. But after a while it didn’t bother me anymore.

We went to movies together, too. We’d get popcorn or Dots or Junior Mints. Just the two of us. It was fun.

At least I thought it was.

W
HENEVER
something bothers me, I’m supposed to talk it over with my parents. That’s the advice my psychologist, Dr. Girard, gave me. “Problems never get solved by keeping your feelings all bottled up inside you,” he said.

I met Dr. Girard last year when we were going through the divorce. I’m not really embarrassed about it. Dr. Girard was a pretty cool guy to talk to. Besides, I wasn’t crazy or anything. It’s just that some kids don’t stay as calm during a crisis as others. Like if I was ever cornered in my basement by a vampire, I wouldn’t be in control enough to make a cross out of two paint sticks or shine a mirror in his eyes. I’d be too busy running around screaming.

I haven’t seen Dr. Girard lately, but I still try to remember some of the stuff he told me. That’s why I finally decided to talk to my mother about Ben. Sometimes if you don’t talk, the pressure builds up and you can explode all over the place. Not your insides. Your emotions.

I waited until she and Ben had had four dates before I said anything. Two movies and two dinners. Until then, I’d just been trying to put up with it. It wasn’t working, though. Seeing them go out together made my stomach feel funny.

Finally I just couldn’t stand it anymore. On their fourth date I stayed awake until Ben brought her home. Then I went to the top of the stairs and listened for his truck to drive away.

I waited patiently while Mom paid Paul Hall for staying with me. Paul’s this high school kid who lives next door. He gets paid, but he’s not a baby-sitter. Baby-sitters take care of you. Paul Hall just slumps in our recliner and watches the Movie Channel.

After he left, my mother turned on the news. As quick as a flash, I was standing in the doorway clearing my throat. I already knew what I was going to say. I’d been thinking about it all night.

The Spare by Carolyn Jewel
Empress of the World by Ryan, Sara
Second Nature by Jae
Somewhere Out There by Amy Hatvany
Broken Heart 08 Must Love Lycans by Michele Bardsley
Tykota's Woman (Historical Romance) by Constance O'Banyon
How To Be a Boy by Tony Bradman
The Billionaire's Beautiful Mistake (Bold Alaskan Men Book 1) by Elizabeth Lennox
Nil on Fire by Lynne Matson
Mafia Captive by Kitty Thomas