Read My Mother Was Nuts Online

My Mother Was Nuts 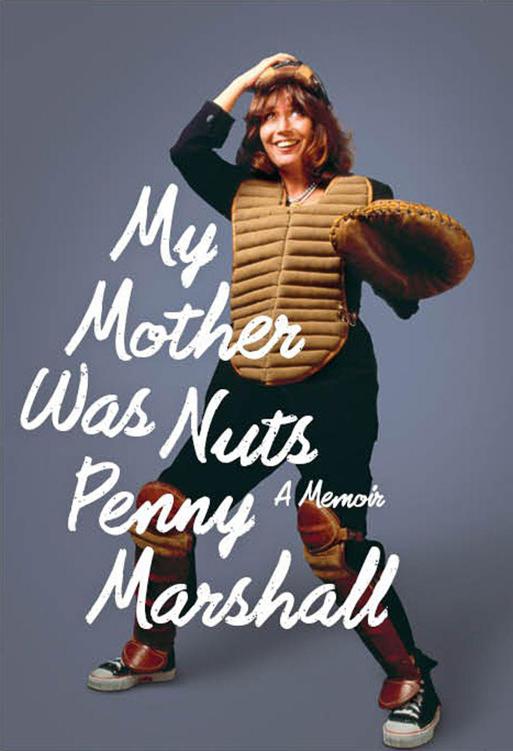 Text copyright © 2012 Penny Marshall
All rights reserved.
No part of this book may be reproduced, or stored in a retrieval system, or transmitted in any form or by any means, electronic, mechanical, photocopying, recording, or otherwise, without express written permission of the publisher.

To my Mommy and Daddy, who gave me their best; my brother, who gave me a job; my sister, who helped me cross the street; and my daughter, Tracy, and my grandchildren, Spencer, Bella, and Viva, who provided me with the opportunity to love them forever
.

INTRODUCTION: Night of the Ninjas

CHAPTER 9. THE FACTS OF LIFE

CHAPTER 11. FORGET THE GAS, I WANT THE JELL-O

CHAPTER 13. A WORK IN PROGRESS

CHAPTER 14. THANK GOD MY BROTHER HAD A JOB

CHAPTER 16. I MADE HIM SICK

CHAPTER 17. ALL IN THE FAMILY

CHAPTER 19. OUT WITH A LAUGH

CHAPTER 23. FROM SUDS TO STARDOM

CHAPTER 32. IN THE EVENT OF MY DEATH

CHAPTER 45. GET ME SOME WHITE CASTLES

I’ve always been crazy but it’s kept me from going insane.
—
WAYLON JENNINGS
(framed in my bathroom)

INTRODUCTION
Night of the Ninjas

I
’M NOT SOMEONE
who’s had to deal with much personal drama outside of the usual: growing up with parents who hated each other, two marriages and divorces, the ups and downs of various relationships, raising a daughter, and watching friends crack up and overdose. There was the cancer thing, too. As you can see, though, there’s nothing out of the ordinary, nothing that most people don’t go through, nothing that says, “Penny, you were lucky to get through that one.”

Oh, except for when I was robbed by the knife-wielding ninjas.

Let me explain. I had come home one night after watching dailies of myself, something I never do because I think I look terrible. I pulled on my favorite flannel nightgown, the one with a
New York Times
crossword puzzle pattern on it, and applied a facial mask, one of those thick pastes. As it began to harden, I heard a strange, unsettling noise inside one of the other rooms. I thought it was my daughter, Tracy, and her boyfriend, Gio Coppola, who were supposed to be there, or my niece, Penny Lee, who was living downstairs in an outside apartment.

I walked out of my bedroom and looked in the living room. It was long and narrow, with sliding glass doors that provided a 180-degree view of Los Angeles, spanning the high-rise buildings downtown to the Pacific Ocean. At night, though, it was a black carpet of shimmering lights. As I stared across the room, I saw someone run into the den and try a terrace door, which didn’t open. I don’t startle easily. I’ve directed seven movies and know a thing or two about dealing with unexpected crises. In an emergency, I’m as calm as a heart surgeon.

Moving methodically, I found the clicker for my alarm system on top of the bookcase, and just as I did, a guy emerged from the den. He had a stocking over his head and a knife in his hand. From his stance, I sensed he was nervous.

“Who’d you let out?” he asked, thinking I’d opened the front gate.

I took a breath.

“My assistant,” I said, lying.

Another guy then appeared, this one dressed like a ninja and holding a large sword. That was a nice touch, I thought. I assumed they must have watched Tracy, Gio, and my niece leave and then come up the hill, thinking the house was empty. They told me that we had to go to the bedroom, but we were interrupted by the phone. The first ring caused all of us to freeze and stare at the blinking light. It was the third line, I noticed—the alarm company.

I guessed the clicker had worked.

I picked up the phone and immediately hung it up again. They glanced at me, then at each other, then back at me.

I knew they wanted to steal something and, unfortunately for them, I didn’t have much in the house to steal. I had only lived there a little more than a year after renting a couple of different homes over the years. I had some old couches downstairs, and a piano in the living room. None of it was expensive, valuable, or movable. I noticed
them checking me out for jewelry. I had on a necklace and a ring that had been my grandmother’s.

The bad robber—the one with the stocking over his head and the knife in his hand—told me to hand over my jewelry. “I can’t,” I said. “I’m doing a movie. I wore them on camera. I have to match in the shots.”

They exchanged looks, and I suppose, this being Hollywood, they understood. They grabbed some cameras on a shelf instead.

By now, my facial mask had hardened, making it difficult to talk. As the bad robber went to look around the house again, he instructed his ninja partner, aka the good robber, to watch me. He said something along the lines of, “If she moves, kill her.” He had watched too many movies. Still, I wondered how that would work. Would he impale me with his ninja sword? Cut off my head? Would his blade go through my facemask?

When the bad robber was gone, I turned to his partner and said, “I’m going to wash this mask off my face.” I didn’t ask. I told him. Then, without waiting for an answer, I went into the bathroom, scrubbed my face, and returned. My robber was surprised when he saw my face.

“Well, you can leave anytime,” I said.

He didn’t move. Neither did I. We stared at each other, unsure what to say next. It was like being in a bad improv class.

“Is this going to be your career?” I asked.

Then the bad robber returned. He was frustrated by how little I had in the way of loot. He looked at me as if that was my fault. I started to explain that had I known I was going to be robbed … But I did have traveler’s checks, which I got out. In the meantime, the phone had continued to ring, and this time I picked it up. It was my friend Susan Forristal from New York checking in. I told her that I
couldn’t talk. Later, she told me that because I had hung up so quickly she thought I was with someone having sex.

Not quite. And when the phone rang again, the bad robber, now annoyed, took the ninja’s sword and destroyed it, reminding me of my old friend John Belushi’s Samurai Warrior character. Of course, this being my life, as soon as the phone was in pieces, another extension began to ring.

“You know, I think I have to be there in person when you cash these,” I said.

“I’m sorry I don’t have more for you,” I said. “I have a Roy Rogers plate in the kitchen. I think it might be a collector’s item.”

The phone rang again, and I answered it. This time it was the police, a Lieutenant So-and-so.

“Do you know these people?”

He asked a number of additional questions. Since we had already established the basics, they struck me as superfluous. Actually, they struck me as stupid and pointless. I was being robbed. The robbery was in progress. The robbers were in my home. I did not know them. They were
robbers
. What more mattered? Annoyed and frustrated, I turned to the bad robber and held out the receiver.

I just couldn’t deal with the cop anymore.

Then he handed the phone back to me. He looked just as irritated with the cop as I was. Neither of us wanted to talk to him.

All of a sudden we heard a helicopter hovering overhead, and the house filled with bright light from its spotlight. I have a lot of glass doors and windows, and all I could think was that the police were going to shoot through the glass and I was going to have to pay for it—in more ways than one. I told the cop on the phone that I had to go. Then I turned to the robbers. It was time to talk common sense, not dollars and cents.

“Listen, you see the helicopter up there,” I said. “Now the three of us are in the same situation. They’re going to come through here and probably shoot you—and maybe me, too. I don’t know. But there is a way out of here, out the back and down the hill.”

So they took off one way and I went upstairs. There were cops everywhere. I told them the robbers had scrambled down the hill, adding that they didn’t have guns. I didn’t want them shooting anyone—especially the ninja going to college. He seemed like a nice kid. I didn’t have to wait long for a resolution. Within a few minutes, cops down the hill radioed that they had caught the bad robber. He was hiding in the neighbor’s bushes down the street.

All Through The House by Johnson, Janice Kay
The Sundown Speech by Loren D. Estleman
The Tale of the Blood Diamond by Laveen, Tiana
Sleeping Beauties by Miles, Tamela
The Lost World of the Kalahari by Laurens Van Der Post
The Body In the Belfry by Katherine Hall Page
Cold Feet in Hot Sand by Lauren Gallagher
Salvation: Secret Apocalypse Book 5 (A Secret Apocalypse Story) by Harden, James
Milo and the Pirate Sisters by Mary Arrigan
The Girl in the Maze by R.K. Jackson