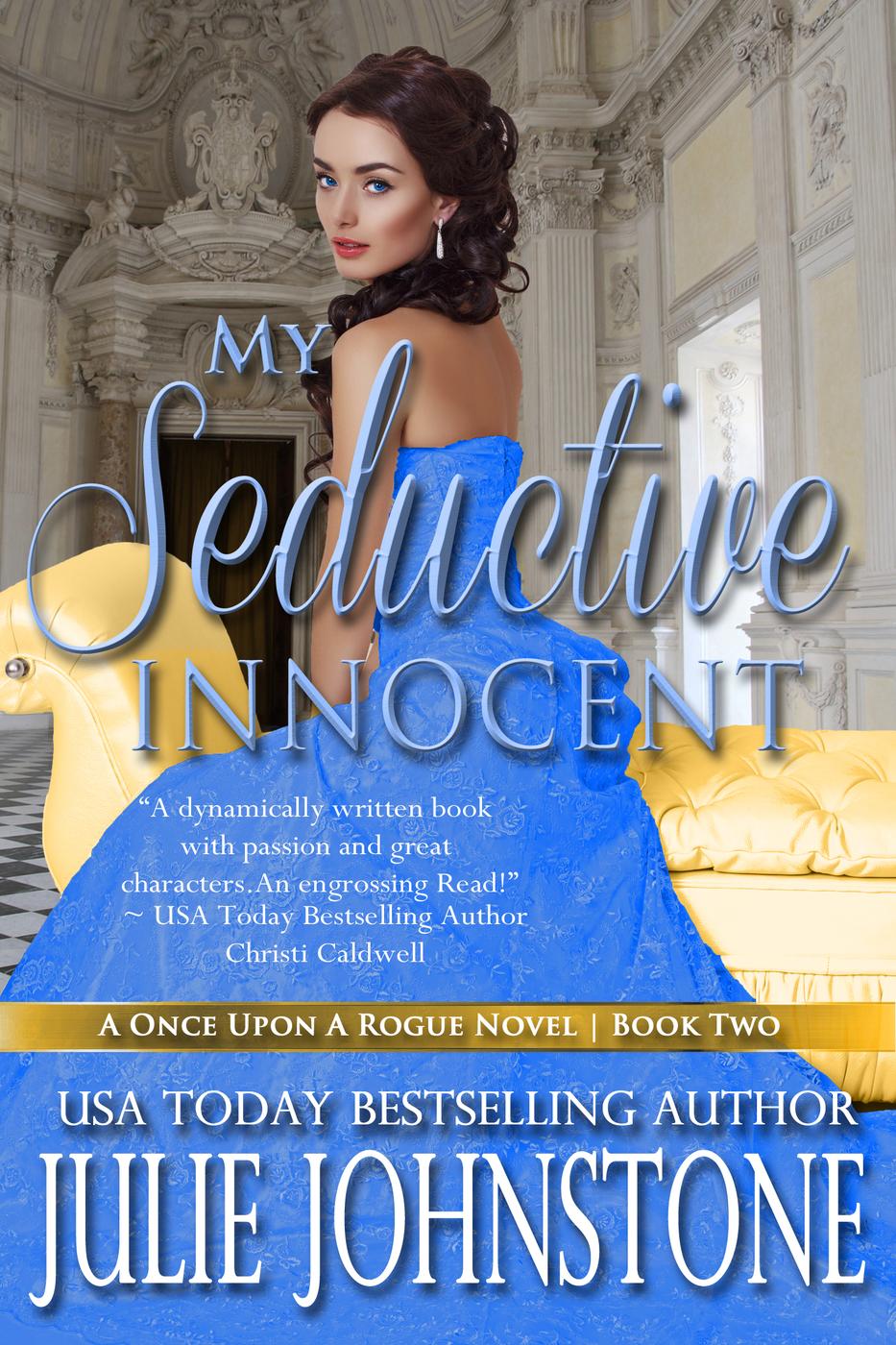 A Once Upon A Rogue Novel, Volume 2

All rights reserved. No part of this book may be reproduced in any form by any electronic or mechanical means—except in the case of brief quotations embodied in critical articles or reviews—without written permission.

This ebook is licensed for your personal enjoyment only. This ebook may not be resold or given away to other people. If you would like to share this book with another person, please purchase an additional copy for each recipient. If you’re reading this book and did not purchase it, or it was not purchased for your use only, then please return to Amazon.com and purchase your own copy. Thank you for respecting the hard work of the author.

For Nina Costopoulos McCallum for all the advice, encouragement, and endless listening. You are a true friend and a talent on the rise! I cannot wait to see how bright you shine!

And for Katherine Bone for your knowledge, wisdom, and graciousness in helping me with the seafaring aspects of this book. You are an amazing writer and beautiful soul!

Nathaniel Ellison, Marquess of Deering, the fifth Duke of Scarsdale tried to block out the annoying noise flowing from his crowded ballroom into the sanctuary of his billiard room. He gripped his billiard stick and took aim, but it was no use. The second the stick connected with the ball, he knew he was too far to the left.

A deep chuckle erupted from the candlelit corner where his friend Philip De Vere, Earl of Harthorne, reclined in a leather chair sipping on his brandy and waiting to play the winner of the game. “I’ve never seen you miss a shot, Scarsdale.”

Nathan smirked in Harthorne’s direction. He didn’t mind the jibing. It was a long-standing, good-natured tradition. “You’ve never seen me give a ball, either. Did you think you knew everything about me?”

“Hardly,” Harthorne replied, amusement lacing his tone. “For example, I would have sworn you would never invite the
ton
into your home, but then you astonished me by agreeing to my sister’s request to host a ball here. How
did
Amelia talk you into this?”

“Sweetly,” Nathan replied. He didn’t care to admit that her story about the plight of London’s orphans had affected him in such an unusual way. It had made him feel compelled to help, and he rarely felt compelled to do anything.

Nathan’s cousin, Ellison, brushed past him to stand in front of the billiard table. He drained his third brandy of the night before speaking. “If you two are done chitchatting,” he slurred, “I’d like to take my turn, so I can wrap up besting you.”

Nathan swept his hand toward their game as he stepped back. “By all means, give it your best shot.” Ellison was always churlish when he drank too much.

As Ellison leaned awkwardly over the table to line up his stick, Nathan’s unwavering and long-established guilt drew his gaze to his cousin’s bad leg, which often made balancing difficult for Ellison. When Nathan looked up, narrowed brown eyes met his, and Ellison curled his lip back from his teeth.

Damnation. Nathan fought to suppress his annoyance. The crowd in his home had already obliterated his patience, not that there had been much of it in the first place. He was in no mood for one of Ellison’s drunken tirades, but he’d put up with it. The price was nothing compared to what Ellison endured every day with his maimed leg, thanks to Nathan. Nothing had been the same since he’d wrecked the carriage they’d “borrowed” from Nathan’s father so long ago and crushed Ellison’s leg in the accident.

“Shelve your tedious, never-ending guilt, Scarsdale,” Ellison growled before turning and taking his shot. The clank of balls hitting and missing their targets filled the room.

From the corner, Harthorne clapped his hands. “Bravo, Ellison. This little game has shown me I’m not the worst billiards player I know,” he teased.

Nathan watched as Ellison gripped the billiard stick so tight that his knuckles turned white.
Hell and damn.
He could feel the heat of Ellison’s mounting ire.

As Harthorne rose and strolled toward them, Nathan tried to give his friend a warning look, but the moment Harthorne spoke again, Nathan realized the warning had gone undetected. “Until tonight I thought I was the only one who missed such easy shots,” Harthorne said as he clasped Ellison on the shoulder and grinned. “I admit I’m glad to have company in not being an expert billiards player like Scarsdale and my sister’s husband, Aversley.”

“That’s enough, Harthorne,” Nathan interjected. Ellison looked as if he was on the verge of exploding with his now red-mottled coloring.

Harthorne’s eyes widened in belated realization, and he hastily nodded his agreement, but Ellison slammed the billiard stick on the table and scowled at Nathan. “I don’t need a defender,
Scarsdale
. God knows where you developed that loathsome trait. Your father certainly never defended you.”

Nathan stiffened at the mention of his deceased father and at the idea that Ellison might think Nathan gave a damn that his father had never taken up for him against his mother’s harsh treatment. He may have cared at one point, but he had ceased to give a damn long before his parents perished in the carriage accident twelve years ago.

Ellison swayed, even as he shook his head in denial. “I can beat you at billiards most every time, even with this bad leg, and you damn well know it.” His sharp words rang in the room.

It was on the tip of Nathan’s tongue to flay his cousin for his crass behavior, but then Ellison grabbed his leg with a wince, and guilt slammed Nathan straight in the chest once again.
You did that to him,
his inner voice reminded him. Slowly and with the casual air of one who seemed to be contemplating the assertion, Nathan twirled the billiard stick with his fingers as he stared at his cousin and, in truth, debated exactly what to say to soothe Ellison without him knowing it.

“You can beat me when I’m distracted,” he drawled, allowing a bit of the conceitedness everyone expected from him to tinge his tone. Truthfully, Ellison had never won against him of his own accord, but Nathan would take the secret to his grave. Stepping around Ellison and briefly meeting Harthorne’s knowing gaze, Nathan took his shot and purposely missed.

Ellison laughed as he swept back the platinum hair that had been hanging in front his eyes and repositioned himself to shoot. The balls clanked together, and Ellison came up grinning as he motioned to the table. The ball he’d been aiming for disappeared into the appropriate hole. “If only my mother would consider her crippled son besting the Golden Duke time and again in billiards an accomplishment, I feel certain she would regard me with the fondness with which she holds you.”

“I’m not the Golden Duke, and you
are not
a cripple. And you know as well as I do that Aunt Harriet’s esteem is not for me but for my title and the esteem it brings her with all her simpering friends.”

“So true,” Ellison agreed with a lopsided grin, becoming suddenly affable, as was his typical pattern when he drank. Ellison leaned down beside Nathan as he stared blindly at the balls. His cousin’s pudgy face appeared inches from his. “You are a daunting duke, if not golden, and one with a fierce scowl on his face at the moment. There are several easy shots here, yet you are staring as if you don’t see one.”

Nathan shrugged. “I suppose I don’t have the keen eye you do.”

“Do you?” Nathan drawled.

“Indeed. Do you know what else I suppose?”

“I can’t say that I do, but I suspect by your serious expression that you are going to enlighten me.”

Ellison was the one scowling now. “I propose you are throwing the game and allowing me to win.”

“You said
propose
not
suppose
. The words carry different meanings.” Nathan parried the truth with drivel, a trick he’d learned long ago from his father when dealing with one of his mother’s moods.

“Don’t try to distract me, Scarsdale. Are you letting me win the games we play?”

“You give me too much credit,” Nathan said. “I’m not nearly that generous or kind.”

“I don’t think so, either, but if you miss scoring this next point, I’m going to know you have been mollycoddling me. And the only creatures I’ve ever seen you mollycoddle are lame dogs. Therefore, I will know you think of me much in the same light as you do that old three-legged hound you rescued some time back. What was his name?”

“His name is Duke,” Nathan replied as he decided what shot to take. It would be simple enough to beat Ellison, though he hated to do it. Obviously, his attempt to help his cousin had backfired.

Nathan moved his stick, tilted his head perfectly to line his shot, and ceased breathing. As the stick slid forward, a shrill, earsplitting sound cut through the background noise of the ballroom music, and Nathan lurched, recognizing Miss Benson’s obnoxious laughter at once. His stick jerked, the cue hitting the ball too far to the left, and his point was lost. Slowly, he turned his head as he stood and tried to think of a reasonable explanation for missing such an easy shot, but when he met Ellison’s accusing stare he snapped his jaw shut at the futility of the endeavor.

Ellison’s gaze fell toward his shoes as his fingers traced a line over the billiard table. “It’s good to know what you really think of me,” he said, so low Nathan almost missed the pitiful words.