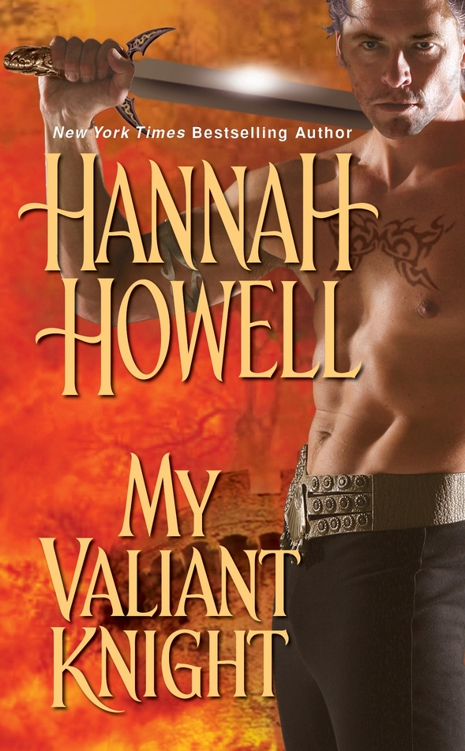 CAPTOR’S KISS
“Are you looking for your father to ride to your rescue?” Gabel asked, leaning against the wall.
Ainslee gave him a brief look of disgust. “I am looking for your weak points, my cocksure knight, so that I may return to conquer your lands and give you a wee taste of captivity.”
“I am all atremble.” He took her hand in his, slowly drew it to his lips, and brushed a kiss over her knuckles. “Yet, what man could protest imprisonment by such fine blue eyes?”
It was nonsense, Ainslee knew, but she smiled and even felt her heart flutter. The tone of his deep voice stroked her. She tensed only briefly, when he reached out to thread his long fingers through her hair. She was not so naive that she was unable to recognize an attempt at seduction, but she did not feel any inclination to rebuff him.
“Ye talk a great deal of pretty foolishness,” she murmured, making no attempt to elude him when he gently caged her body between his and the wall.
“Foolishness? Nay. ’Tis but the pure truth.”
Ainslee shuddered when he brushed his lips over her forehead. They were soft and warm, and their touch clouded her mind. She knew he was going to kiss her. Warmth rushed through her body, pushing away all remnants of the chill caused by the brisk weather. She clutched at the front of his thick tunic, desperately needing the support when he slowly began to deepen the kiss. She clung more tightly to him, pressing her body closer to his as she fully succumbed to the power of his kiss . . .
Books by Hannah Howell
ONLY FOR YOU * MY VALIANT KNIGHT *
UNCONQUERED * WILD ROSES * A TASTE OF FIRE *
HIGHLAND DESTINY * HIGHLAND HONOR *
HIGHLAND PROMISE * A STOCKINGFUL OF JOY *
HIGHLAND VOW * HIGHLAND KNIGHT *
HIGHLAND HEARTS * HIGHLAND BRIDE *
HIGHLAND ANGEL * HIGHLAND GROOM *
HIGHLAND WARRIOR * RECKLESS * HIGHLAND
CONQUEROR * HIGHLAND CHAMPION *
HIGHLAND LOVER * HIGHLAND VAMPIRE *
THE ETERNAL HIGHLANDER * MY IMMORTAL
HIGHLANDER * CONQUEROR’S KISS * HIGHLAND
BARBARIAN * BEAUTY AND THE BEAST *
HIGHLAND SAVAGE * HIGHLAND THIRST *
HIGHLAND WEDDING * HIGHLAND WOLF *
SILVER FLAME * HIGHLAND FIRE * NATURE OF
THE BEAST * HIGHLAND CAPTIVE * HIGHLAND
SINNER * MY LADY CAPTOR * IF HE’S
WICKED * WILD CONQUEST * IF HE’S SINFUL *
KENTUCKY BRIDE * IF HE’S WILD *
YOURS FOR ETERNITY * COMPROMISED
HEARTS * HIGHLAND PROTECTOR *
STOLEN ECSTASY * IF HE’S DANGEROUS *
HIGHLAND HERO * HIGHLAND HUNGER *
HIGHLAND AVENGER * HIS BONNIE BRIDE *
BORN TO BITE
Published by Kensington Publishing Corporation
H
ANNA
H H
OWELL
M
Y
V
ALIANT
K
NIGHT

Fragile Bonds by Sloan Johnson
Children of Poseidon: Rann by Carr, Annalisa
Deadly Race by Margaret Daley
Parker 09 The Split by Richard Stark
Little Mountain by Elias Khoury
Too Much Temptation by Lori Foster
Trick of the Light by Thurman, Rob
Mail-Order Bride by Debbie Macomber
Money to Burn by Ricardo Piglia
Point to Point Navigation by Gore Vidal