Mystery at the Ski Jump 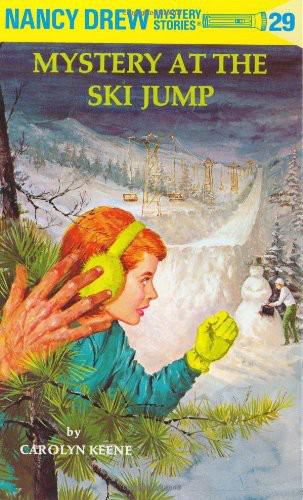 Table of Contents
Title Page
Copyright Page
CHAPTER I - The Strange Woman
CHAPTER II - A Serious Loss
CHAPTER III - Missing Earrings
CHAPTER IV - More Trouble
CHAPTER V - The Second Nancy
CHAPTER VI - Curious Dealings
CHAPTER VII - The TV Tip-off
CHAPTER VIII - Trapper’s Story
CHAPTER IX - A Disastrous Jump
CHAPTER X - A Surprise Announcement
CHAPTER XI - The Password
CHAPTER XII - Slippery Sidney
CHAPTER XIII - The House Party
CHAPTER XIV - The Fur Thief
CHAPTER XV - Racing a Storm
CHAPTER XVI - An SOS
CHAPTER XVII - The Hidden Cabin
CHAPTER XVIII - A Weird Light
CHAPTER XIX - Zero Hour
CHAPTER XX - The Tables Turned
MYSTERY AT THE SKI JUMP
WHEN Nancy learns that the Drews’ housekeeper has been duped by an elegantly dressed woman into buying a stolen fur piece, the young detective starts a search for the clever swindler. To Nancy’s astonishment, she discovers that the woman is using the name Nancy Drew. The dishonest acts of the impostor point the finger of suspicion at Nancy herself and result in her being questioned by the police.
Nancy’s determination to capture the elusive, dangerous Mitzi Channing takes her to northern New York State and Canada. At a gala winter event Nancy is shocked to hear her name announced as a figure skating champion about to perform. How Nancy meets this situation and turns the tables on Mitzi Channing and her fellow thieves makes another thrilling Carolyn Keene mystery.

CHAPTER I
The Strange Woman
“BRR-R, it’s cold!”
Nancy Drew shivered and pulled the collar of her coat higher against the driving snow. Determinedly, she ducked her head and pushed along the darkening street, a new pair of skis slung over one shoulder.
Suddenly, out of nowhere, a long black car skidded across the sidewalk directly in front of the titian-haired, eighteen-year-old girl.
“Oh!” Nancy cried out, leaping back just in time to keep from being hit. A second later the car crashed into the porch of a nearby house.
As Nancy dashed forward to see if the driver were hurt, the door of the house flew open and the excited owner, Mrs. Martin, rushed out.
“What happened?” she called. Then, seeing the car, Mrs. Martin ran down the snowy steps. “Is someone hurt?”
Nancy had already opened the door on the driver’s side. A slender woman in a fur coat was slumped across the steering wheel.
“Help me bring her into the house,” Mrs. Martin directed. Nancy laid down her skis. Together they carried the unconscious stranger inside and put her on a sofa in the living room.
“I believe she’s only stunned,” Nancy announced, pressing her fingers to the victim’s wrist. “Her pulse is regular and the color’s coming back to her cheeks.”
“Just the same, I think we should call Dr. Britt,” Mrs. Martin said nervously. “Will you do it, Nancy? The phone’s in the hall. I’ll get a blanket upstairs to put over this woman.”
Nancy went to call the doctor. The line was busy and it was a few minutes before she could get a connection.
“Dr. Britt is out,” the nurse reported, “but I’ll give him your message.”
“Thank you.”
Mrs. Martin came down the stairs with a blanket and Nancy told her Dr. Britt would stop there as soon as possible.
“Doctor! Who wants a doctor?” an annoyed voice called from the living room. “I certainly don’t need one. Say, how did I get here?”
Nancy and Mrs. Martin were amazed to see the woman driver sitting up on the sofa. She was removing a make-up kit from the pocket of her coat. She calmly began to powder her face and dab on some exotic perfume as Mrs. Martin explained what had happened.

“Doctor! Who wants a doctor?” the woman protested
“It was the storm,” was all the unexpected visitor said.
Quickly Nancy appraised the woman. She was about thirty-five, strikingly handsome with blue-black hair, pale skin, and high cheekbones. An expensive-looking mink coat was draped nonchalantly over her slim shoulders.
“Why, Mrs. Channing,” Mrs. Martin said suddenly. “I didn’t recognize you. I’m glad you feel better. Nancy, this is Mrs. Channing from the Forest Fur Company.
“Mrs. Channing, I’d like you to meet Nancy Drew. She lives here in River Heights with her father, a famous lawyer. And Nancy herself is one of the best young detectives I ever—”
“Lawyer—detective!” Mrs. Channing cried out. There was such a sharp expression in her dark blue eyes when she looked at Nancy that the girl felt slightly embarrassed.
“At least Dad is a fine lawyer,” Nancy said, smiling. “Sometimes he asks me to help him on his cases. Your work must be interesting, too, Mrs. Channing. I’ve never heard of the Forest Fur Company. Where is it?”
“Oh, we have many branches all over the country.” Mrs. Channing started to rise from the sofa but fell back weakly.
“I think you really should see a doctor,” Nancy suggested kindly. “You’re still shaky from the accident.”
“I’ll be all right!” Mrs. Channing answered emphatically. “Perhaps if I could have a cup of tea—”
Nancy turned to Mrs. Martin. “I think I’d better run along,” she said.
“Oh, it’s so cold outside, do stay and have some tea with us. It won’t take a minute.”
“Thank you, but I really can’t,” Nancy replied. “I’m leaving with Dad on a trip in the morning and have a lot of packing to do.”
Nancy was looking forward to helping her father on a case in Montreal and enjoying some skiing. He had promised to tell her about his work at dinner that night.
A few minutes later she was shaking the snow from her coat and boots on the back porch of the Drew home. Opening the kitchen door, she called, “Hi, Hannah! I’m back.”
“Well, I’m certainly relieved,” replied a motherly voice from the hall. “What a storm! Did you buy the skis?”
“Yes, I did. They’re real beauties. I can’t wait to use them in Montreal.”
Nancy recalled with pleasure her ski weekend there the previous winter. What a wonderful feeling to stand on top of the mountain, in the cold crisp sunny morning, with the white world below her! Then off—down the fast trail to the bottom, concentrating on every turn and twist as the challenging trail demanded. Nancy had become so proficient that she had won the novice ladies’ slalom race, successfully turning through all the slalom gates, in the fastest time.
Nancy smiled to herself as she thought of the “slalom gates,” which were really just flags on tall poles stuck in the snow. Funny-looking “gates”!
The Drews’ middle-aged housekeeper walked into the kitchen and smiled affectionately at Nancy. Hannah Gruen had been with the family ever since Mrs. Drew had died when Nancy was a small child.
“I was delayed by an accident.” Nancy explained what had happened. “I’m afraid Mrs. Martin’s porch will need a lot of repairing.”
The conversation was interrupted by a telephone call from Nancy’s friend, Ned Nickerson, inviting her to a fraternity dance at Emerson College the next month. She accepted gaily, then went upstairs to start packing. Five minutes later Hannah bustled into the bedroom.
“Look what I have to show you!” the housekeeper exclaimed.
Nancy’s eyes gleamed. “A mink stole! It’s beautiful!”
“It was such a bargain, I couldn’t resist it,” Hannah explained excitedly. “I’ve always wanted a fur stole but never felt I could afford it.”
Nancy took the fur piece and laid it around her own shoulders. “It’s gorgeous,” she said. “Where did you buy it?”
“From a simply charming woman,” Hannah replied. “She represents the Forest Fur Company. You see, she had already sold a stole to my friend Esther Mills. And Esther suggested—”
Nancy was not listening. At mention of the Forest Fur Company, her thoughts went racing back to the mysterious Mrs. Channing.
“Nancy, do you think I was foolish?” the housekeeper asked anxiously as the girl frowned.
“I’m not sure,” Nancy answered absently. “It does look like a good fur piece. But it’s an odd way to sell expensive furs.”
“I hope everything’s all right,” said Hannah, a worried look replacing her former eagerness. “I also invested some money in Forest Fur Company stock. The woman, a Mrs. Channing, sold me ten shares. I paid her fifty dollars for it. But I’m sure it’s okay. I have the certificate in my bureau drawer.”
ADS
15.4Mb size Format: txt, pdf, ePub

Shana Abe by The Truelove Bride
Fallen by Lia Mills
Beating Heart by A. M. Jenkins
Ice Phoenix by Sulin Young
Lacrosse Face-Off by Matt Christopher
HotTango by Sidney Bristol
Something Fierce by Carmen Aguirre
Battle for Proxima by Michael G. Thomas
Kitty Genovese: A True Account of a Public Murder and Its Private Consequences by Pelonero, Catherine
Renegade by Souders, J.A.