Mystery of the Runaway Ghost 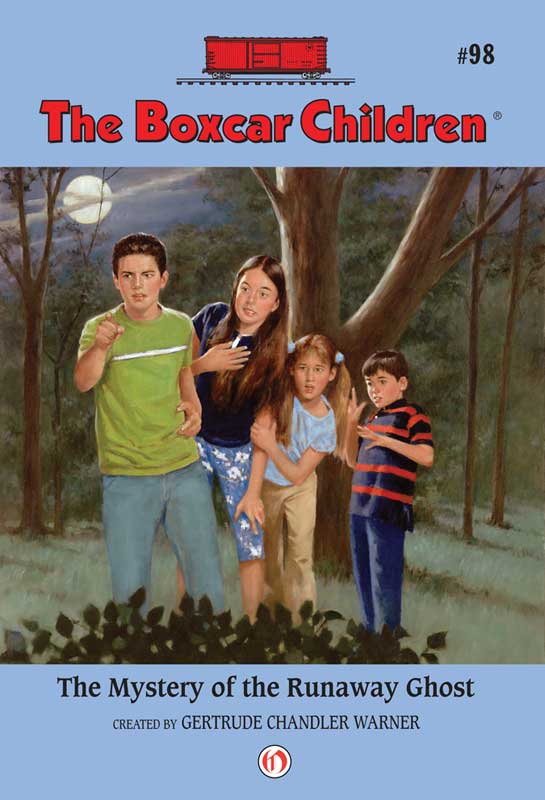 3 Elephants and a Riddle

5 A Pile of Rubbish

8 How Many Were Going to St. Ives

9 Saved by the Bell

10 A Message from the Past

“Grandfather should be home soon,” said six-year-old Benny. He pressed his nose against the living room window. “Any minute now, we’ll find out about the surprise!” He sounded excited.

Ten-year-old Violet came up behind her younger brother. “I wonder what kind of surprise it is.” She looked out the window, too. There was no sign of Grandfather yet.

Jessie, who was twelve, was placing napkins around the dining room table. “It’s not like Grandfather to be so mysterious,” she said. “Tell us again what he said on the phone, Henry.”

“He didn’t say much,” said Henry, as he poured lemonade into tall glasses. “He wouldn’t even give me a hint. He just said he was bringing home pizza for dinner — pizza
and
a surprise.” At fourteen, Henry was the oldest of the Alden children.

“One thing’s for sure,” said Jessie. “Grandfather’s surprises are
always
fun.”

At that, Watch, the family dog, looked up and barked in agreement.

Violet had a faraway look in her eye. “Remember when Grandfather surprised us with the boxcar?”

The others nodded and smiled. After their parents died, the four Alden children had run away. They discovered an abandoned boxcar in the woods and made it their home. Then their grandfather, James Alden, found them and brought them to live with him in his big white house in Greenfield. He had the boxcar moved to his backyard as a special surprise for his grandchildren. The Aldens often used the boxcar as a clubhouse.

Just then, James Alden walked in the door. He was holding a pizza box from Joe’s Restaurant. “Ready to dig in?” he asked, smiling fondly at his grandchildren. “I ordered an extra-large topped with special tomato sauce, extra cheese, and pepperoni.”

Benny let out a cheer. “That’s my favorite kind!”

The children forgot all about the surprise for a while as they helped themselves to pizza. Finally, Grandfather sat back in his chair and said, “Are you ready to hear my news?”

Henry, Jessie, Violet, and Benny looked up expectantly. “Yes! What is it, Grandfather?” Violet asked.

“I was talking to my friend Fran Russell today. I have some business to take care of in Cedarburg, Wisconsin, and I thought I’d stop by to see her while I’m there.” Grandfather took a sip of his lemonade. “She invited the four of you to come with me and spend a few days with her at Shadowbox. What do you think?”

Everyone thought it was a great idea. The children had often heard their grandfather speak of his good friend Fran and her old stone house, Shadowbox.

“Shadowbox sure is a weird name for a house,” Benny said.

“The name fits, Benny,” said Grandfather, smiling over at his youngest grandson. “When you see the house, you’ll know what I mean.” He helped himself to another slice of pizza.

Henry was curious. “How old is Shadowbox, Grandfather?”

Grandfather took a bite of his pizza and chewed thoughtfully for a moment. Then he said, “As I recall, Fran’s ancestors built Shadowbox back in the 1850s. It’s been in the family ever since. Fran takes great pride in her home,” he added. “And in the family ghost.”

The children all looked at their grandfather in surprise. “The family
what
?” said Benny his eyes round.

Grandfather’s eyes crinkled with amusement. “According to the story, Shadowbox is haunted by a runaway ghost.”

“What do you mean?” asked Henry.

“Is the ghost one of Fran’s ancestors?” Jessie asked at the same time.

Then Violet chimed in, “What kind of ghost runs away?”

Grandfather couldn’t help laughing as he held up a hand to slow them down. “You’ll hear all about the runaway ghost when you get to Shadowbox.”

Benny wiped tomato sauce from his chin. “Won’t you tell us now?” he pleaded.

Grandfather shook his head. “Fran loves to tell visitors about the family ghost. I don’t want to spoil it for her.”

“I doubt it, Benny,” Grandfather said. “But Fran enjoys entertaining people, and a good ghost story is bound to get everyone’s attention.”

“It sure got
our
attention!” said Henry.

Benny nodded as he took the last bite of his pizza. “I can’t wait to hear more about it.”

“Well, you won’t have to wait long,” Grandfather told him. “Our flight leaves the day after tomorrow.”

“Cedarburg isn’t much farther,” Jessie said, studying the map unfolded on her lap. She was sitting in the front seat of the car Grandfather rented at the airport.

The Aldens looked out the windows at the peaceful Wisconsin countryside. Rolling fields stretched for miles, broken only by big red barns and old stone houses. “Wow, there sure are a lot of cows around here,” Benny noticed. 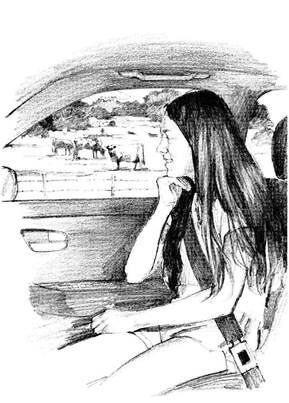 “Wisconsin is the land of the dairy cow,” Grandfather told him. “As a matter of fact, there are more cows here than in any other state.”

As Jessie admired a field of wildflowers, she thought of something. “Does Fran still make her own greeting cards?” she asked, remembering the beautiful card Grandfather had received on his birthday. It had been decorated with a border of pressed flowers.

Grandfather nodded. “Pressing flowers has always been a hobby of Fran’s. A few years ago, after her husband died, she decided to turn her hobby into a small business. She put her greeting cards on display in a local gallery. Now they’re selling like hotcakes.”

“Wow, I guess Fran doesn’t have to worry about money,” Benny said.

“Her greeting card business helps pay the monthly bills,” Grandfather replied, “but that’s about all. Something always needs fixing in an old house, and it can be very costly. That’s why Fran decided to take in a boarder for the summer — someone who pays to live with her. Her son wasn’t very happy about it, but she needed the extra money.”

“Why wasn’t her son happy about it?” Henry wondered.

“From what I hear, Nelson thinks his mother is working too hard. And he’s not happy that she spends most of her hard-earned money trying to keep the old house in shape. He doesn’t see the point to it. The truth is, he’s never shared his mother’s fondness for the past. Now that he has a brand-new house of his own, he wants Fran to sell Shadowbox and move in with him.”

“Oh, Fran’s made it clear she has no intentions of selling,” Grandfather assured Violet. “She loves Shadowbox too much for that. But it
has
caused some hard feelings between mother and son.”

Before long, the Aldens were driving through the town of Cedarburg. Old cream-brick buildings lined both sides of the street. Tourists strolled along the sidewalks and in and out of the little shops.

In no time at all, they were pulling into a long driveway. At the end of the driveway was an old stone house nestled among the tall trees.

“It sure is,” said Grandfather, slowing to a stop. He waved to a tall, silver-haired lady rushing over to greet them. Everyone scrambled out of the car.

“It’s good to see you, Fran!” Grandfather gave his friend a warm hug. “It’s been too long between visits.”

“You can say that again, James!” Fran’s blue eyes were sparkling. “And these must be your wonderful grandchildren.” The lace collar on her lilac dress fluttered in the breeze.

Grandfather smiled proudly as he introduced Henry, Jessie, Violet, and Benny. They all shook hands with Fran. “It’s very nice to meet you,” said Jessie, speaking for them all.

“Now I know why your house is called Shadowbox,” Benny piped up. “It’s shaped just like a big box, and it’s hidden in the shadows of the trees.”

“Exactly — yes!” said Fran, who seemed delighted that Benny had figured it out.

Glancing at his watch, Grandfather said, “I hate to rush off, but I have a dinner meeting to attend.”

Fran waved that away. “You’re here on business, James. I know that.”

Grandfather lifted the suitcases from the car. “I should have everything wrapped up in a few days,” he said, smiling at his friend. “Then we’ll have time for a nice visit.”

Fran smiled back. “I’ll look forward to it.”

The children waved good-bye to their grandfather, then they followed Fran into the house. As they set their suitcases down in the front hall, she turned to them. “Your grandfather tells me you’re real experts at solving mysteries.”

“We
have
solved quite a few,” admitted Henry.

Fran was quiet for a moment, then she said, “The thing is, a mystery fell into my lap the other day. And I’m completely baffled by it.”

“We’d love to help,” offered Violet. And the others nodded eagerly.

Fran smiled gratefully. “I’ll tell you about it after dinner,” she promised. “But right now, it’s time to introduce you to the runaway ghost.”

The Aldens looked at one another in amazement. Were they about to meet a real ghost?

Henry, Jessie, Violet and Benny followed Fran into a cozy living room that looked out on Cedar Creek. Fresh flowers in colorful vases had been placed on every table. A sunny-yellow couch and buttercup-patterned chairs were grouped together invitingly around a large stone fireplace.

“Thank you, Jessie,” Fran smiled. “It’s my favorite spot in the house.”

“Oh, a painting of Shadowbox!” Violet said in surprise.

The other Aldens followed her gaze to the picture hanging above the fireplace. It was a peaceful summer scene with the stone house peeking out from among the trees. Nearby, a black-and-white cow grazed lazily in the late afternoon shadows.

“Meet the runaway ghost!” Fran gestured to the painting with a big sweep of her arm.

The Aldens looked at one another in confusion. Before they had a chance to ask any questions, Fran spoke again.

Henry added, “All I see is Shadowbox.”

Nodding, Fran brushed a wisp of silver hair back from her face. “Her name was Buttercup. But she’s known as the runaway ghost.”

The children were so surprised by Fran’s words, they were speechless. Was the family ghost really a black-and-white cow? Jessie noticed a shiny brass plaque attached to the picture frame. Sure enough, the title of the painting was
The Runaway Ghost.

“Buttercup’s story begins many years ago,” Fran said, making herself comfortable on the couch, “back when Shadowbox was still part of a big farm.”

“This was once a farm?” Benny asked in surprise.

“Yes, indeed!” Fran told him. “My great-great-grandparents, Selden and Anne Gorton, started the farm back in the 1850s. They raised cows here for many, many years.”

Benny looked puzzled. “What happened to it?” he wanted to know. “The farm, I mean.”

“Selden and Anne’s grandchildren decided not to be farmers. They sold off the land in bits and pieces. Now there’s only Shadowbox and the lawns around it.” A sad smile crossed Fran’s face.

“Was Buttercup one of Selden and Anne’s cows?” asked Jessie.