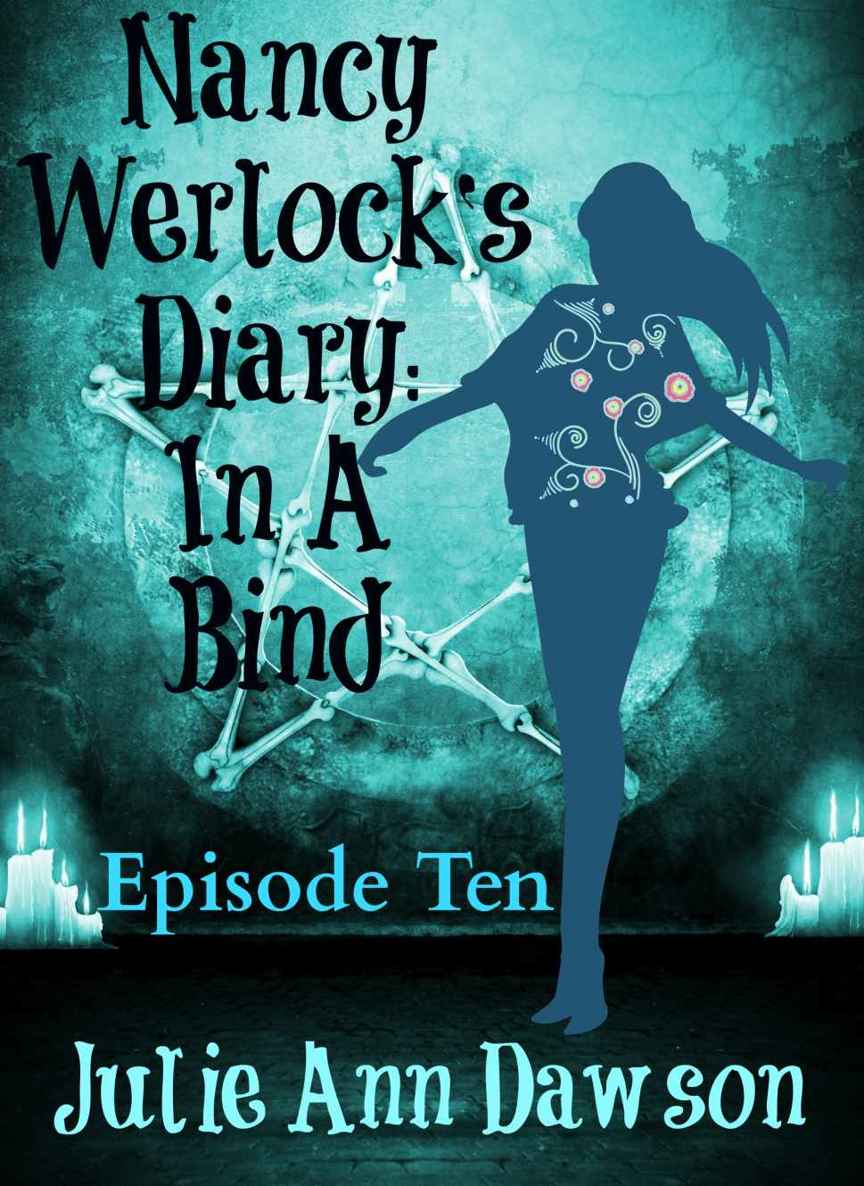 After months of trying to outwit the maneuvers of Lord Advocate Joshua Brynwolf, the powerful psion finally makes his presence known. But what he reveals alters everything Nancy and Houston thought they knew about the strange events in which they have found themselves involved.

The granddaughter of a deceased demonologist comes into the shop looking for information on haunted houses and alerts Nancy to the existence of a powerful but obnoxious demon.

These stories are works of fiction. Any resemblance to persons living, dead, or undead is coincidental and vaguely disturbing.

This digital product is licensed for the enjoyment of the original purchaser. Please do not engage in file-sharing or illegal duplication. While we do not rely on DRM, we do employ DAP (Digital Arcane Protection). Illegal file sharing may result in gremlins or other mystical creatures overtaking your computer or ereader. Such infestations would be considered “acts of gods” and most likely not covered by your warranty. We thank you for your understanding and cooperation.

I wake up to the sound of Houston hitting his punching bag in rapid succession and regret letting him set the thing up in his room. I should have made him put it in the basement. But usually he works out his frustrations at the gym and it never occurred to me he would use the thing in the middle of the night. I turn to look at the clock and, of course, it is 3 o’clock in the morning. Because, you know…witches…

After five minutes of listening to him work out his issues, I throw on a robe and walk down the hall. I knock on the door and he stops working the bag. “Sorry,” he replies.

I open the door. He turns around and I can see he’s been crying. “Houston, what’s wrong?”

“But you aren’t fine
now
. What happened?”

Harlan, our house brownie, was attacked by the neighbor’s cat a few nights ago. Cats for some reason see brownies as prey and often attack them. But the cat in question actually has a good temperament and wouldn’t have gone after a brownie on someone else’s property. Our investigation indicated something possessed the cat to incite it to violence.  The agency says Harlan will make a full recovery but that is all we know.

“Harlan is lucky that you found him,” I say. Houston just nods. I can tell from the look on his face there is something he wants to say, but he can’t seem to get it out. But when I try to open up a channel to talk to him telepathically, I realize he’s warded. Then I notice the charm around his neck.

Realizing I’m looking at it, Houston touches the charm and says, “I got it from Risha. She was worried.”

“What did you tell her?”

“Nothing! But…she knows Brynwolf is out there. And she’s knows we’ve been up to our eyeballs in weird shit. So…oh, that reminds me.” He goes over to his dresser and pulls another charm out of the drawer. “I meant to give this to you earlier but my mind was in a million places.”

“Thanks.” I take the charm. Lead core from the weight of it, dipped in silver and inscribed with runes. “Did Risha make these?”

“No, she knows an Artificer. He owed her a favor.”

“You realize we won’t be able to talk to each other telepathically wearing these.”

“Yeah, well, you’re always saying I need to learn to communicate without jumping in people’s heads, right? Now’s as good a time as any.”

“Well, we don’t need them in the house,” I say. Between my mother, your mother, and—”

“Yeah, well, something got to Harlan despite all of them,” interrupts Houston. “So humor me and wear it.”

“Oh, um, I forgot. Eric needs you to sign off on some progress reports for his internship?”

“I got his file. He gave it to me when I left the shop and I forgot to give it to you so here.” He hands me the folder.

“All right. Could have waited until morning. But Okay.”

“Sorry. I’m just so distracted by everything. And spooked. And
pissed
.”

I go back to my bedroom and leave the folder on my dresser. I start to remove the charm and then look around the room. I realize I am shaking. I decide to leave the charm on and try to go back to sleep. By 5 o’clock, I give up trying and get out of bed. A hot shower doesn’t help shake off my tiredness.

Vivika staring back at me in the mirror, however, does the trick.

“My son won’t talk to me,” she blurts out. I can’t hear her because of the charm, but I can read her lips well enough.

“He’s freaked out, Vivika,” I reply as I wipe the condensation off the mirror to see her better. “You are aware what happened to Harlan?”

She nods and vanishes from the mirror. As I leave the bathroom, she manifests into an almost solid form to speak to me. “Will the fae live?” she asks in a disembodied voice. Ghost-Speech always unnerves me. Usually, ghosts and spirits speak telepathically. To mundanes, such telepathic speech may sound normal; as if you were talking to any other person. But it is actually an auditory illusion created by the mind as a way of rationalizing what is happening.

But spirits can vocalize when the manifest. It takes a lot of effort and strength to do so, which is why they prefer telepathy. When they vocalize, the sound
surrounds
you. You can actually feel it like a sudden cold breeze flowing over you from all directions. I hate it.

“As far as I have been told, he should recover.”

“Oh. Well, that is something. At least.” She begins to nervously pace. “Any idea what did it? Could it just have been the cat?”

“Vivika, I’m not completely sure of anything these days.”

“I see.” She stops in front of the window and looks out over the back yard. The light from the morning sun breaks up her form in some places. She’s having difficultly holding the form together. “Did you see his floor? And the window sill? He’s…my son has warded me out of his room completely. I can’t even manifest to talk to him. He…he blames me for what happened. I’m sure of it.”

“You have to let him work through this on his own,” I say. “I’m sure he has enough blame to spread around to all of us. But he’s also putting a lot of the blame on himself. He needs you to give him some space so he can work through what he is feeling.”

“I just want to protect him.”

“I know. That’s what moms do. But there is a fine line between protection and suffocation. And I suspect the last thing Houston needs right now is his dead mother manifesting in his bedroom for a midnight chat.”

Vivika laughs weakly. “I know you’re right, Nancy. I do. I just feel guilty for putting him through this.”

“What changed your mind?”

“Pettiness. I used it as a threat against his father to keep him in line. After a while it just…I don’t know. Feel into the trap that a child would make things better between us? But I didn’t actually
want
Houston until the day he was born and I held him for the first time.” She makes a cradling gesture with her arms. “He was such a perfect little baby. Such a…I don’t know why I’m telling you all of this.”

“Probably something to do with that degree I have in family counseling,” I joke. “People love free therapy.”

Vivika chuckles and turns around. “I am a terrible mother, and a worse human being.” It isn’t a lament or even a confession. She says it as a statement of fact. “For all of my power and plotting and careful planning, I’ve hurt the one person in the world I wanted to protect. And my selfishness has put him on a course that…whatever happens, Nancy. Promise me you will take care of him.”

“We’ll get through this, Vivika.”

She vanishes back across the Veil.

I get to the shop to find Houston and Eric hanging charms disguised as Halloween decorations around the windows and door of the shop. Before I can even say anything, Houston says, “I figure after the whole thing with Anastasia and that wisp, it might be a good idea to keep them out of the shop.”

“You know that will repel her anima as well, right?”

“Price we need to pay to keep safe.”

I leave them to their project and head to my office. After I settle in, I open up Eric’s file folder to get his progress report out of the way. Between the papers is a special order form. It is the special request for a Persian Griffon egg placed by a man named John Shan the other day.  Houston has circled the man’s last name. At the time, Houston had made a geeky Star Wars joke about the man’s name, and the man had revealed his own inner geek by replying with a joke of his own.

He also circled the street address and the phone number. On the back of the receipt, Houston wrote the words, “Don’t trust her.” Those were the last words Harlan had said before the other brownies rushed him away.

I tap the address into Google Maps. It belongs to a company called Corellia Heating and Cooling. Even I get
that
Star Wars reference. The phone number, 874-632-6437, doesn't match the address. It isn’t even a local number. I try Google again but it doesn’t even appear to be a valid number.

I was never good at stupid puzzles. I struggle with it for a few minutes, and then “cheat” and use Google to find a phone number cipher tool. I actually found one in the first three search results. I scroll through the results after imputing the phone number. I stop when I get to: u-r-in-danger.

I close the folder, grab my purse and jacket, and head out of the office. I grab Houston by the arm. “Field trip. Eric, hold down the fort while we’re gone.”

“Where we going?” asks Houston.

“Use the Force,” I say. He nods and follows me.

I park in front of Corellia Heating and Cooling and the two of us just stare at the building until Houston finally says, “Could be a trap.”

“Too many mundanes around,” I reply.

“Maybe we should have called Steve.”

“And tell him what? We’re tracking a Dark Lord of the Sith?”

We enter the business to find the showroom empty of staff. A surprised salesperson comes out of the break room with a cup of coffee in his hand. “Morning!” he says. “You folks are getting an early start today!”

The salesman’s eyes glaze over for a moment and he walks behind the counter in a daze. He pulls an envelope out from under the register and hands it to me. I hand it to Houston. “Thank you,” I say.

The man shakes his head vigorously for a moment and then looks back at me. “I’m sorry; who did you say you were looking for?”

“Oh, yes, our friend John told us to stop in…and…you have some sort of promotion on water heaters?” I stammer.

“Oh, sure. That time of year, isn’t it? Nobody wants to take a cold shower in the winter!” As he shows me a selection of water heaters, Houston opens the envelope and then looks around to see if there is anything else suspicious. We leave with a stack of brochures and a quote.

“That was slightly creepy,” says Houston as we get back in the car. He taps the envelope to his chin. “It’s him. You know that?”